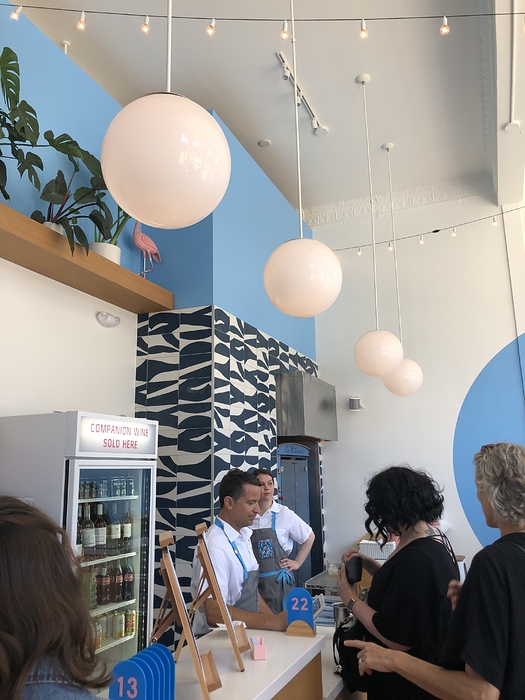 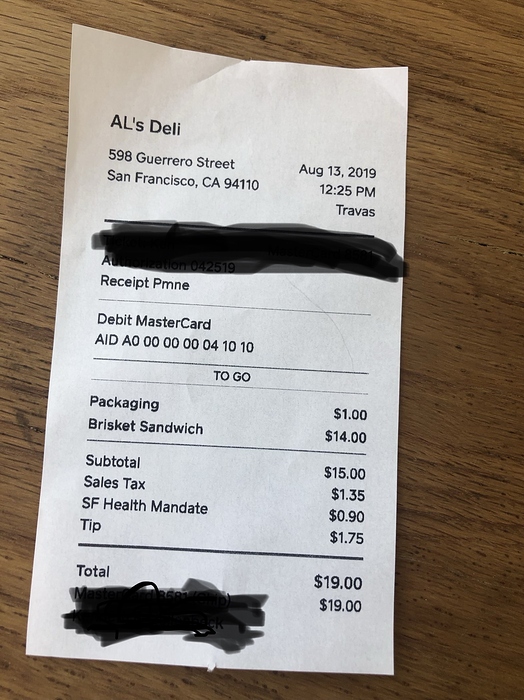 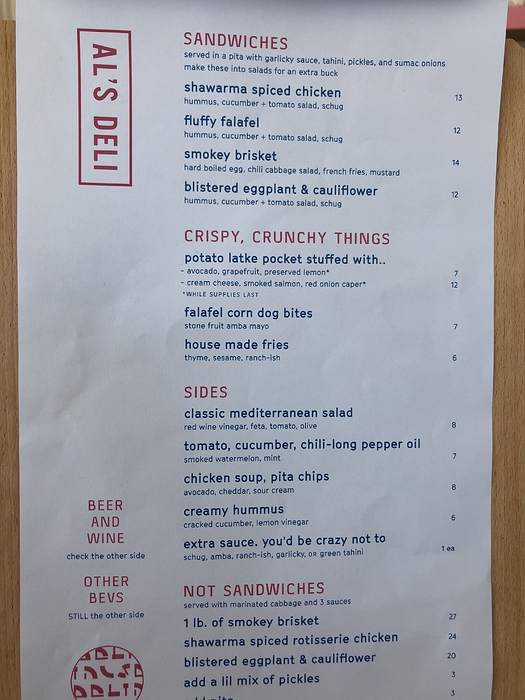 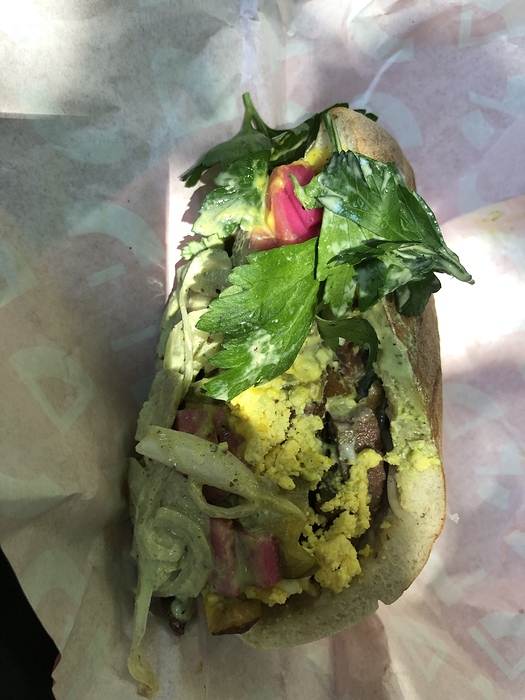 Offshoot of Al’s Place in the Mission, Mediterranean focused casual menu. Bright and cheery space on Guerrero and 18th.
I only had the Smokey Brisket Sandwich, take out. Came in a pita with a lot of veggies and some egg salad (?).
The good: I hunted a piece of brisket out of the mass of vegetables to try on its own and the flavor was great, tender and smoky, excellent flavor.
The bad: The amount of brisket was miniscule, like 2 small pieces. Although the veggies were great, super fresh and some nice pickling, there was waayy too much going on and you mostly tasted veggies and egg salad. Also the sandwich is pretty small for $14. They add on a healthy SF mandate and also charge “packaging” fee of $1.00 for take out orders [which I assume was for the paper wrap the sandwich came in because there was no other packaging to speak of]. So with tip I’m $19 all in for a sandwich that left me hungry and craving more brisket.
They have a 1 Lb. brisket plate for $27 that I would get next time should I ever make it back.

also charge “packaging” fee of $1.00 for take out orders [which I assume was for the paper wrap the sandwich came in because there was no other packaging to speak of]

Packaging? is that a new thing in SF?

I am only aware of restaurants charging for takeout boxes beyond a certain number. Never heard of places charging for packaging, especially for a piece of paper wrap. This is ridiculous.

There is a lot of room somewhere between a “skimpy on meat” sandwich and a one pound meat plate. The pricing between the two seems out of sync, too much for essentially a vegetable salad sandwich and, in comparison, too little for the paleo plate. They need a solid, meaty sandwich to sell around $14-15, frills a la carte and extra.

Yeah I wouldn’t have mentioned it if it didn’t seem so absurd - they didn’t even give me a cheap plastic bag for 10 cents. Now that I read the description I see that is was supposed to have French fries in the sandwich but did not. Maybe that would have helped with the heft.
Honestly the brisket was quite good and the veggies were exceptionally fresh and vibrant, but I’m going to wait for someone else to try the brisket plate and report back before I return. I know I should be jaded by $14 sandwiches after living in SF so long but yesterday I had an excellent $16 katsu sandwich at Stonemill Matcha and no SF Healthy or package charge and I was still full by dinner time.

Exactly, it tasted like a vegetable salad sandwich [albeit a good one] with brisket as one of the ingredients, rather than a “smoky brisket sandwich”

Why did you tip on a takeout order? Is that expected now?

I hate tipping culture and especially its tendency to expand into all kinds of different, previously untipped realms, but in general you should tip a bit on takeout at places where the front-of-house staff had to expend time and energy in putting your takeout order together. If my $50 order of three entrees and an appetizer means that someone (whose primary job responsibilities involve helping tipping customers at tables in some fashion) had to assemble a bunch of takeout containers, make sure I have some cutlery/napkins/dipping sauces etc., and pack a bunch of different items together sensibly so they don’t get squished, I think it makes sense to toss that guy at least a couple of bucks.

Things get murkier in situations like these, where you order one item at a counter-service place and it requires minimal effort by the cashier to wrap the sandwich in paper and ring you up. I might tip a buck or two, but wouldn’t lose sleep over it. It’s not fair to the people handling the register, but the incredibly obnoxious combination of an itemized 6% health care surcharge PLUS $1 for “packaging” on a paper-wrapped sandwich (a new innovation in nickel-and-diming!**) is the kind of infuriating practice that makes me less likely to want to fork out even more for a tip on top of all that.

**At best the $1 surcharge has a distribution problem - if AL has computed that his average packaging costs are really $1 per customer, if he charges everyone the same $1 for packaging, he is essentially screwing over customers who place small orders by making them subsidize the >$1 packaging costs of customers who order a bunch of items and a soup and thus need everything packaged in multiple spill-proof containers. A less charitable explanation is that his average packaging costs are significantly less than $1 and he’s simply come up with another bullshit surcharge to raise prices through the backdoor while maintaining a facade of slightly-less-outrageous sticker prices on the menu.

Why did you tip on a takeout order?

Because I’m a sucker.
Tipping on take-out in San Francisco seems to be expected as far as I can tell. In hindsight, between the Healthy SF charge and the packaging charge I shouldn’t have tipped. But you have a line of people behind you, 15 minutes on the parking meter, they swing that screen around and you are staring at 15, 20 or 25% tip in big letters so I didn’t even look at the bill until I left the restaurant. Which is the other thing I hate about those POS machines, because you are tipping before you have gotten service. What if they screw up your order or it takes 45 minutes or whatever. There is so much money floating around the SF Bay Area that a lot of consumers aren’t phased by these charges, so I think this is where you will see nickel and diming pushed to its limits before it spreads to the rest of the country.

There are tipping jars EVERYWHERE in San Francisco. Bakery lines. And I see everyone in front of me contributing.

Next, they’ll be alongside parking meters.

I think yelp and other restaurant trackers and especially the news media’s slightly embellished press releases for these counter service restaurants should include what they’ve set the POS system to display. For many/most it is 15, 20, 25 buttons and a difficult to find text or small link for none or custom. Only a few (currently I can only think of the chains Sweetgreen and Tender Greens) do not ask for tip. An interesting case, Rico Rico Taco started with what I assume was standard vendor installed, maybe 15, 18, 20, then switched to very low amounts, 1, 2, and 3%, then the next week upped that to something like 5, 7, 9. I haven’t been in a few weeks, so who knows what it is now.
I have been assuming that this is largely a way to keep tipped prices but display the sort of pre-tip prices we have come to expect on restaurant menus. I prefer a no tip, (no line on the bill for a tip even after you say prices include tip) model and if I were President or Governor I would declare that all prices include tip, service charges and tax.

My response to those credit-card terminals which try to shame you into tipping is to pay in cash. I’m talking about small takeout orders at counter-service places, not sit-down restaurants.

Also, has anyone noticed that some (all?) of them compute the tip amount by multiplying the displayed percentage by the after-tax total? Has this become the norm, too? Traditionally the tip is a percentage of the pre-tax bill. I’m not sure if customs have changed, or they’re just trying to take advantage of a mathematically-challenged population.

Not all of them compute tip on the after-tax total. Probably less than half, although still a sizable minority. That’s another peeve of mine - not only for how it shows the inevitable creep of tipping culture when restaurants try and milk more $ out of you by setting the system this way, but also that it’s the kind of arcane detail that makes you look miserly for even complaining about.

Outing generational differences, it would never occur to me to use a card for a take out meal. Woowee, I am OLD! 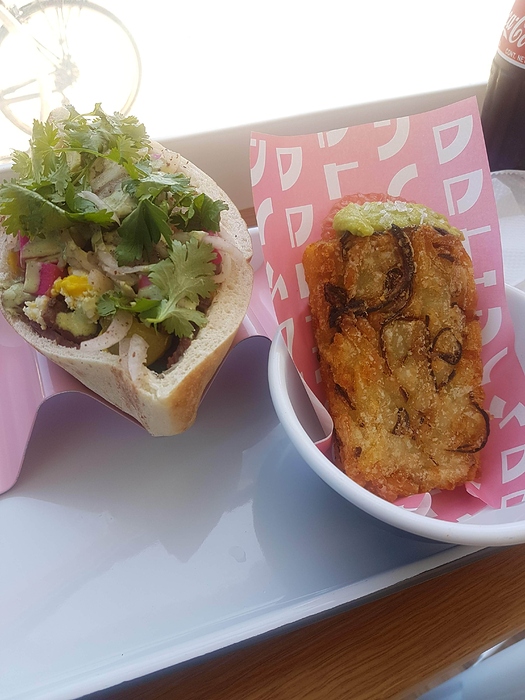 I happened to drop by today for the first time and also tried the brisket sandwich, although the menu now just calls it a smoked meat sandwich. Still a whole bunch of stuff in it (pickled vegetables, fries, egg salad, some yogurt like sauce), but there seemed to be a sufficient amount of meat in there. I generally thought it was quite good. Also tried the latke stuffed with avocado and grapefruit and preserved lemon, which didn’t work well for me. It’s a fairly plain tasting latke and a pretty acidic thin avocado sauce inside, with a couple slices of grapefruit. On the other hand, I happen to really like McDonald’s hash browns, so you should maybe draw your own conclusions about fried potato based dishes.

the menu now just calls it a smoked meat sandwich

The online menu is now calling it “Montreal Style Smoked Meat” and still lists it as having French fries in it (the picture on their website shows some French fries sticking out as well), but mine had none and I don’t see any in the one you got.

The fries were in there, just hiding somewhere underneath all the other stuff. I hadn’t read the menu very carefully and was pretty surprised to find them, but they actually worked pretty well. It’s very much a sandwich where every bite had some different combination of ingredients, though. The yogurt sauce was mostly buried at the very bottom as well.

Indeed. From their website: At AL’s Deli, London is able to play with elements of Israeli street food and traditional East Coast Jewish deli fare

The only place that has it as AL’s Deli is Eater. Chronicle, Yelp, etc. all have it as Al’s Deli.

here’s my review for Mission Local. 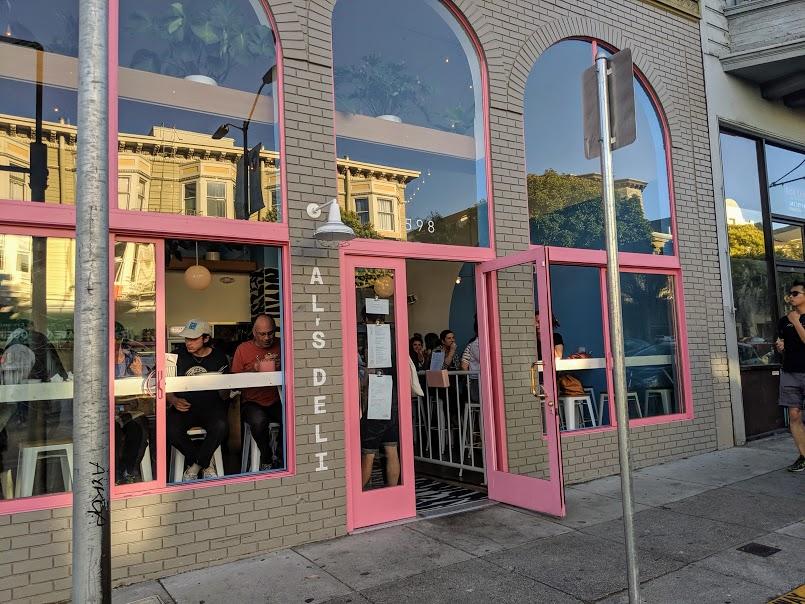 AL’s Deli is the offspring of AL’s Place – yes, that AL’s Place, the one voted Best New Restaurant in America in 2015 by Bon Appetit. Chef Aaron London’s