I’ve been seeing an annoying echo in the world of hot peppers. Folks are regurgitating a falsehood which was published years ago, in the Mother Earth News, by Wm. Woys Weaver. While I respect Mr. Weaver’s efforts in many areas, he is dead wrong about equating the hot pepper known as “Lemon Drop” with Aji Limo; they are not the same. Other falsehoods appear in the article as well. Now, scores of companies have confused the marketplace, calling Lemon Drop Aji Limo.

My degree is in biology, specifically botany. Plant taxonomy was part of the training and I’ve worked in herbariums. I also traveled extensively in Peru, was married to a Peruvian woman and have studied, collected and grown the primary Capsicums of Peru.

First things first: Aji Limo is just a name; it does not refer to Lima or lemon, despite the phonetics. Many erroneous web pages have emerged over the past decade, claiming otherwise; don’t believe it. Even the Chili Pepper Institute published an article, back in 1997, supporting my position (“Introducing Peruvian Aji Chiles”, Chile Pepper Institute, Volume VI, Number 3, Fall 1997). Sorry, the link for this article has escaped me, but I have a .pdf copy, if anyone wants me to email it to them. It’s a gmail account, just put rob.botanique in front of the at symbol, etc. Aji Limo is grown primarily far from Lima, the capital; it’s mostly grown in the northern coastal areas, but has wider use as a dried pepper where it can safely travel as far as the Andes and beyond.

Aji Limo, Capsicum chinense, is not even the same species as Lemon Drop, C. baccatum. Aji Limo comes in many colors, with the most common form being red. Here are some I grew years ago: 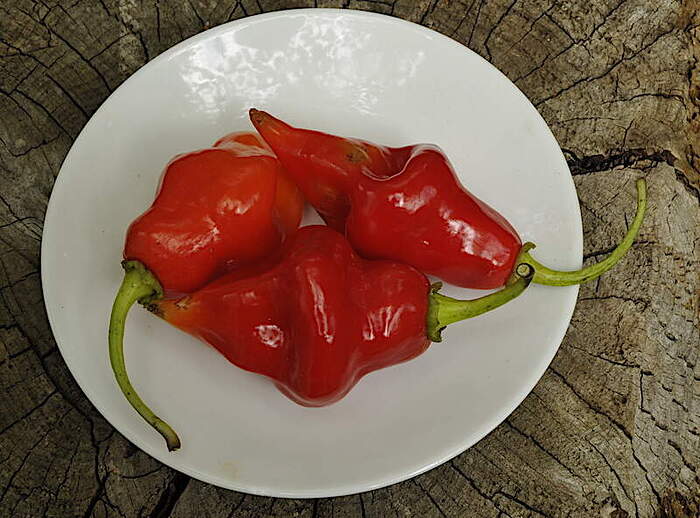 What’s interesting is that, despite how common Lemon Drop is in the USA, it’s a very obscure pepper in Peru; you don’t see it in the marketplaces or restaurants. In Peru the real Aji Limo is much more common.

Unlike many C. chinense, such as Habanero, Aji Limo lacks the strong, almost “goaty” aromas; it’s a very fresh, clean and fruity Capsicum flavor. It’s rather similar to a pimento. However, it’s blazingly hot! Even with the septa (“veins”) and core removed (the hottest part), it still packs a punch. It’s used in Ceviches. A similar-looking pepper, Rocoto (C. pubescens) is also often seen in Peruvian ceviches. Both peppers, when sliced, can be mistaken for pimiento to the uninitiated; be aware that these two are fiercely hot.

Unfortunately, Aji Limo is painfully hard to find in the USA. Do a search and Lemon Drop, the imposter, comes up every time. In the USA, the Chile Woman often sells plants of Aji Limo Red. I’m trying to build up seed stock of this so it can be distributed. If you are looking for the true Aji Limo, search for a red pepper; Lemon Drop is always yellow (so far). Aji Limo peppers are blocky to top-shaped, very shiny, with more than one flower coming out of the same node, indicating its placement in C. chinense.

So what is Lemon Drop? When I first came across this, it wasn’t called anything except by a United States Dept. of Agriculture accessions number “PI 315024” from Peru. Since the peppers do have a marked citrus aroma, someone started calling them Lemon Drop, though I don’t know when or where that began. Lemon Drop is Capsicum baccatum. You can identify the species by the green spots on the flowers’ petals/corollas. It’s one of the C. baccatums that is much more tolerant of hot growing conditions than Aji Amarillo ( Escabeche or Mirasol forms).

Lemon drop is a lower-growing bush with usually 2–3 inch, slender, thin-walled yellow pods. I don’t have an image to share at the moment, but those are easy to find online.

Sadly, the fast-moving misinformation highway, which is the internet, has created confusion regarding these two, unrelated peppers. Before the truth gets drowned out by bibliographic echo, I hope this will help dispel the plethora of falsehoods regarding Aji Limo.

I admire your passion and commitment to setting the record straight. Thank you!