Spending 2 weeks in Goa at the start of my planned 2 year trip to Asia. Will try and update on a regular basis and hope it may prove helpful.

Not sure of the name of the place but it is by the reception for Agonda Beach Retreat. First meal in India. Good okra curry that had been fried fast so wasn’t slimy, especially liked the roasted aubergine in it. The tarka was very runny like dals in Southern Indian places I’d been to in the UK . Well seasoned though and the fried garlic was very nice. The rotis were very light and crisped nicely but with white flour not the normal wholemeal I’m used to.

This was on the beach and I guessed by the location and the size and diversity of the menu it wouldn’t be all that. We were though having a beer and too lazy to find anywhere else. Paneer butter masala was quite bland an overly sweet. The malai kofte ( made with lentils, coconut and cashew nuts) had the same problem with the sauce ,though the yoghurt helped a bit. I enjoyed the rotis, more like the ones I’m used to and properly charred in the tandoor but a little heavy.

Forgettable breakfast of bland masala omelette had peppers and some coriander but not much else.

Where else are you going in India?

I asked my Goan friend his favorite places there, below are his top three recommendations

Mum’s Kitchen: a very authentic Goan food
Brittos and Martin Corner: if you love fish ( like me )
Ritz Classic ( a must in my opinion )

Wow- 2 year trip. Same question as Donald, where else are you going?

As it’s 2 years it’s a fairly loose plan. After Agonda it’s Kerala via Hampi and Mysore. After that it’s Chennai via Pondicherry and then Delhi. Some time in Northern India, into Nepal and back to India. In August the missus flies off to Tanzania to climb Kilimanjaro with her sister and mother. I will head off to Taiwan via Kuala Lumpur. Meet back in September in India, more Northern India then Goa via Mumbai for Xmas.

There are large number of places in Agonda called Fatima’s (even one specializing in Greek Souvlaki), whether they’re all owned by the same person or it’s a case of name appropriation, I’m not sure. This towards the end of the beach away from the church. As we’re on a budget we went veggie again.
Tara Dal again ( Tadka Dal on the menu). Still runny like the first one we had on arrival but hotter in terms of chili heat also some of the pulses ( yellow split peas I think) had kept their shape, I particularly liked the roasted chills.
We had ordered veg kadai for the other dish but the waiter recommend veg jalfrezi. There was nice heat and spicing and a lovely sweet caramelized note to the veg, especially the cauliflower. The rotis were excellent, good char but soft and light and a really nutty flavour. The guy making them knew his stuff and seeing some of the kebabs he was pulling from the tandoor, will try some of those.

This is a beach place near the end of the beach away front the church. We were in their for our sunset beer last night and someone ordered pakoras (pakodas on the menu) they smelt great so the next night we ordered some. They came hot out of the fryer, crisp & nicely spiced, not doughy in the middle. The veg was cauliflower, spinach, okra and I thought I tasted some pea. Also the beer was the coldest we’d had so far.

A very Italian sounding name and the signage with a fat Italian chef made it seem a tad incongruous. I have learnt in Asia to never judge a restaurant’s signage as an indication of it’s food. We chose this place as it was the only one we could find that did pork vindaloo. Lots of other places did vindaloo but not with pork.

It was fairly empty and seemed more geared to serving the guest house it was part of rather than other customers. Indeed I’ve rarely come across a place more disinterested in serving. It was a struggle to get drinks, the rice and rotis with our food and the bill. The irony of the Just Bring It slogan on our waiters t-shirt wasn’t lost on us. This was a shame as the food was really good.

It turned out that they had run out of pork vindaloo so we ordered the chicken xacuti instead. This turned out to be a lot wetter than the versions I’ve had in London. Everything was far less pronounced than the London version, especially the star anise and chilli but it was enjoyable none the less. The real standout dish was the dal fry. I’d assumed this was dal without the fried chill and spices added at the end. Indeed this was the case but very different to dals we’d been having. It was dark rather than yellow. Still quite soupy but thicker than standard. You could tell they had really slowly caramelized the onions and it had very deep savoury, almost beefy flavour. Very good indeed. Rice was nicely done but the rotis were a bit pale and chewy, though we had been spoilt on the roti front lately.

Quick update on the place with no name. It’s called New Common Home and is essentially a pop up run by guys from Kashmir who come down every year for the season so it may be elsewhere next time. BTW most of the restaurant staff are either Nepalese or KashmirI. Which explains all the tandoori dishes and momos on menus.We subsequently went twice for tandoori in the evening as they looked like they knew what they were doing with the tandoor. The rotis this time were preferable as they were much browner with a much nuttier flavour. The daal was also improved being much thicker with bigger savoury hit. The chicken and then king fish were both moist with a good char though the texture both times was bit too pappy. I suspect too long in the marinade. 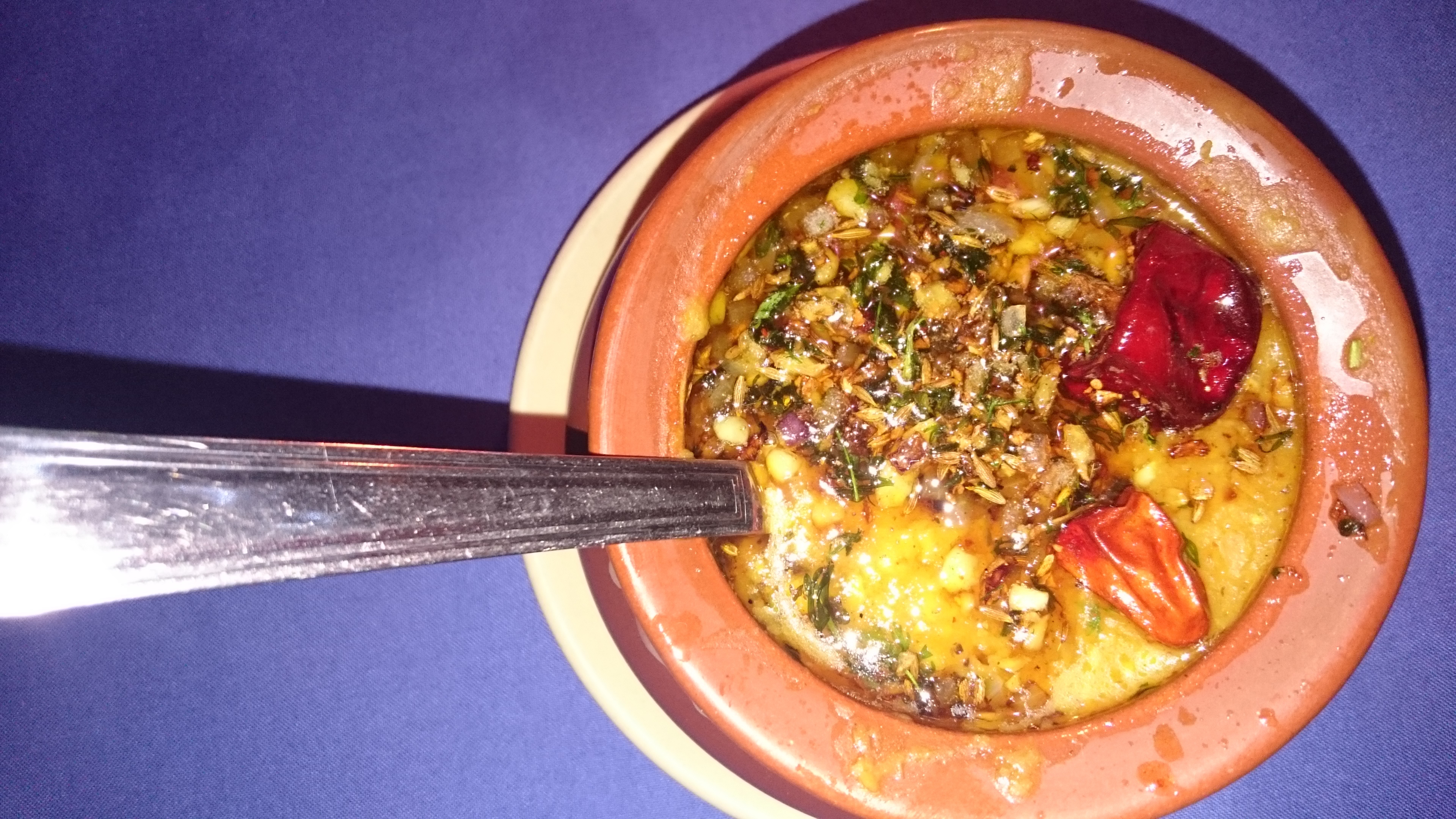 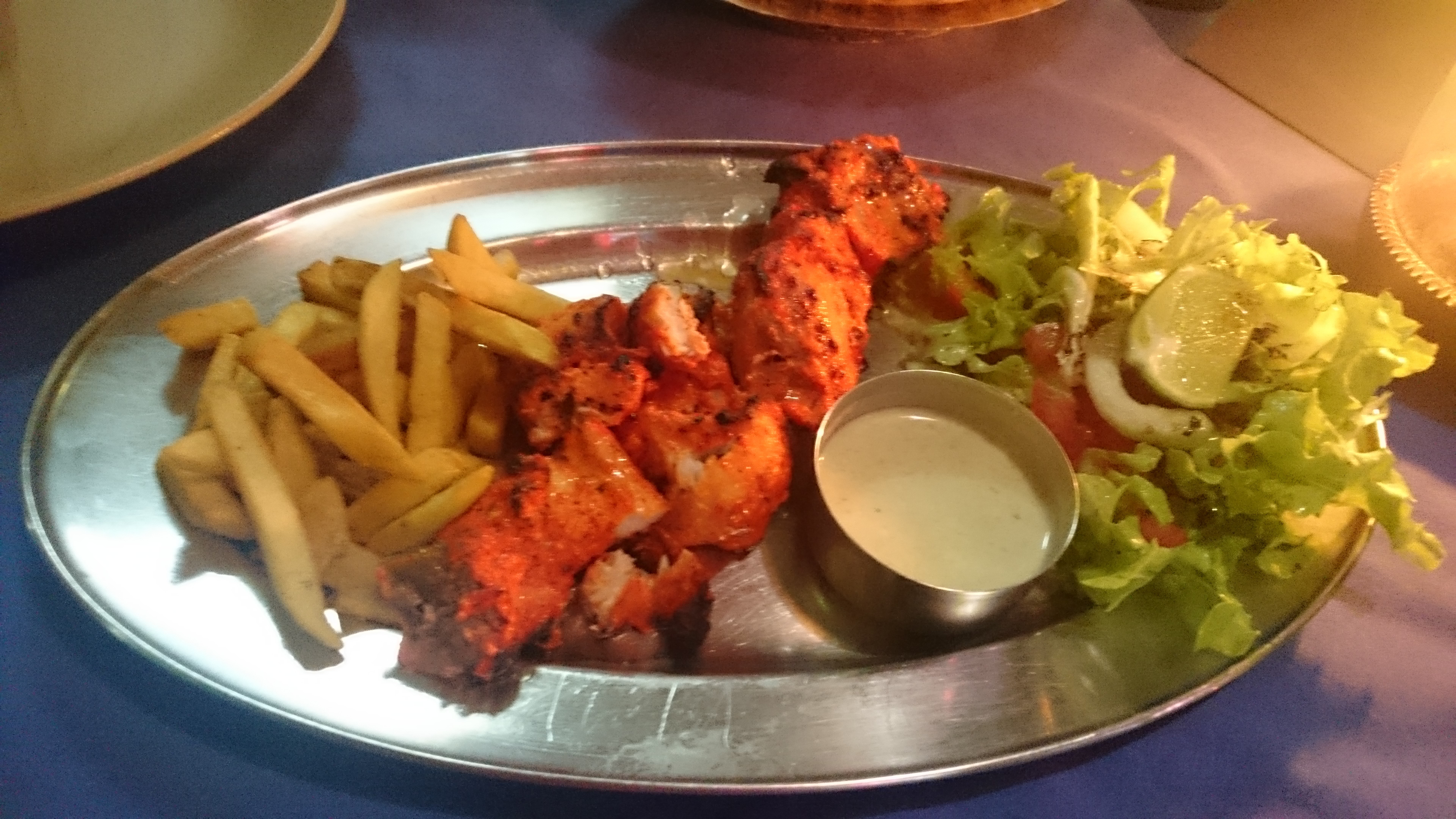