A new choice in packaged desserts

Has anyone but me tried this new item? Thoughts? 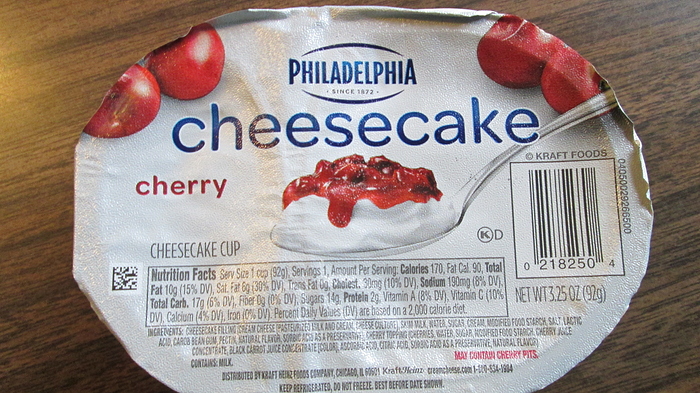 So it’s like a single serving yogurt cup but with cheesecake? Nice!

How did it taste? I see my Shop-Rite is carrying them. Cherry, milk chocolate and salted caramel toppings!

This being a packaged dessert, the topic belongs in General Discussions, not Cooking.

How did it taste? I see my Shop-Rite is carrying them. Cherry, milk chocolate and salted caramel toppings!

The Cherry topping was very astringent, with a pronounced aftertaste. The Cheesecake? No “bulk”. Creamy, and I wouldn’t have identified as cheesecake in a blind taste-testing. My opinions only, of course.

But you’re not MAKING it. Would you discuss Oreos here?

I’m confused. The topic in Cooking is Baking, Sweets. That comma!

The General Category doesn’t seem to include a sub-folder for “Food Products.” Should it? (Or should I say, Does It? I may be missing something.)
It seems to me that in principle you are right, but I can see why the poster looked at the General Categories and thought: nope, not those.

If you look at the topic under General Discussions, you’ll see things like Blue Diamond Almonds, Breads Around the World, and canned soup. As you may know, the categories in HO closely follow the format we were used to on Chowhound, where packaged foods were a subject for General Discussion unless the conversation was about incorporating them in something you were making or baking, such as what type of pudding mix to use in making a parfait or pudding cake. Arnold Bread vs. Pepperidge Farm? General Discussion, not baking, because you aren’t baking it. Duncan Hines vs. Betty Crocker? General if you’re discussing their comparative merits, or lack thereof, but that’s a grayer area since you are using the cake mix, essentially, as an ingredient with which you are working.

But you make a good point. It would help if the General Discussions section stated that it includes packaged and prepared foods.

Thanks for the info. I rarely click on the topic. Now I see a very wide variety of posts under “general.”