A Horrible Day for Food: An NJ-based Nightmare

It was yesterday. Posting this now because I needed to digest.

It was Justin’s mom’s birthday. Of all places, she chose the Reo Diner in Woodbridge. I had been there three times already. I wanted to suggest otherwise, but when it comes to someone’s birthday, I do not interfere with what they want. My first visit ever five or six years ago, I was harassed by a 50-something waitress clearly strung out on something who ambushed me while my dad was in the bathroom. Then, quite randomly, she explained in vivid detail her last sexual encounter and asked what she should say to the gentlemen who loved her when she did not love him back. It was a gross story, made even worse when the storyteller has track marks and missing two front teeth. She even added before walking away, “Can you ask your father when he comes back what he thinks?” I was horrified. Oh and the food was dreadful. The kind of bad that is an accomplishment.

But I digress. Despite swearing to never go back, I did eat there two other times with my hockey posse after shopping at Hockey Monkey in Woodbridge. I stuck with breakfast and enjoyed it.

Fast forward to yesterday, and what a disaster! I ordered a turkey, bacon, and cheddar panini. The turkey was slimy and tasted old. The flatbread fell apart when picking up. I took five bites and pushed it aside. Justin, uninspired by the menu, ordered chicken fingers. He was served four elementary school cafeteria style tenders which were soggy and had some kind of white grime on them. His father had a veal cutlet. While it was enormous, crispy, and looked delicious, it tasted like a freezer (he cut a piece off for me to try). The gravy they put over it could have passed for that stuff they would shoot at people on Nickelodeon in the 90’s. His sister’s fried fish drew neither complaint nor compliment, and his mom enjoyed her meal (also fish). There was an empty dining room yet we were sat next to a waitress on her break who unleashed several profanity-laden tirades at the hostess because of a scheduling issue. The last thing I recall her saying was, “I’m gonna kill that f*cking guy.” By the end of the meal, I had hoped she meant the chef, but she didn’t.

A half hour in, two more tables were sat. Both were couples, probably in their 80’s. At this point, music was playing somewhat loudly. When Justin’s sister made a rather loud comment about the food and was shushed, I said (not realizing the music was going to literally stop at the exact moment I opened my mouth), “Given the average age in here, I don’t think anyone heard a thing.” Of course, the music stopped and a light flickered above me. It was like the heavens parted and gave me a microphone. Justin swears one of the elder customers heard me. But I didn’t care. I was irate. This food was inedible. Total garbage.

Before the check, the waitress asked Justin if he would like something else. He refused several times and she actually went so far as to give him any meal on the menu FOR FREE because of the inconvenience. He said, “Thank you very much but I can’t eat anything else that comes out of that kitchen.” I did like our waitress. She was excellent.

Later that night, we hit The Globe for our weekly visit. Sure enough, I had my first ever dud of a meal. I ordered a chicken fajita wrap, no peppers, and was given a tortilla with five or six tiny pieces of grilled chicken and nothing else. No cheese, onions, rice, etc. I asked for them to take it back and add onion, which they did. However, they heated the chicken again and it was like rubber. I ended up sending it back and there were no problems. They replaced it with a BLT and it was delicious. We also ordered some damn good bacon cheeseburger sliders that started to turn this nightmare day around

On the way home, I had a strange craving for candy (which I rarely eat). Grabbed a bag of gummy Starmix. I opened it up and was confronted by the oddly fused piece below. It sure looks like a certain something, but it also served as a middle finger to me on this day. The final exclamation point on one of the worst food days I’ve ever had in my life. 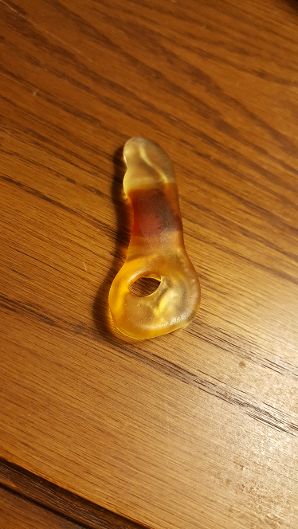 I’m sorry you had such a bad food day. The indigestion will pass and you will have a kick-ass story for years!

At least Justin’s mom had a meal she seemed to be happy with.

That’s all that mattered, really. At least the birthday gal enjoyed hers.

My first visit ever five or six years ago, I was harassed by a 50-something waitress clearly strung out on something who ambushed me while my dad was in the bathroom. Then, quite randomly, she explained in vivid detail her last sexual encounter and asked what she should say to the gentlemen who loved her when she did not love him back. It was a gross story, made even worse when the storyteller has track marks and missing two front teeth. She even added before walking away, “Can you ask your father when he comes back what he thinks?” I was horrified.

First, I’m sorry you had such a bad food experience on somebody’s birthday. That sucks and I’m glad you all managed to salvage the occasion. However, as you seem to be someone who is serious about their writing, this sounds like the kind of place that could easily provide you with a novel’s worth of material.

I tried it once for breakfast after Pete Genovese of the Star Ledger tweeted about it on one of his NJ Diner tours. What I remember: cramped parking lot although they do have an auxiliary lot across the street. My plate was chipped and should not have still been in use. Not particularly friendly greeting or service. The Edison Diner, although never spectacular, I find to be most reliable in the area. I also like Le Peep in the Wick Plaza for breakfast. But you have to get there early on a weekend morning to avoid a wait for a table.

Damn Greg, you should have played the lottery to balance out your odds

Did you have “funachos” in high school? They had that day glow psychedelic “cheese”…if you could call it cheese. It was like watered down yellow play doh with some salt.

Threads like this are why I stick to breakfast at 99% of diners. Someplace like the skylark are the only spots I try anything past eggs becan and toast
Sorry to hear you suffered such a sh!tty meal but st least globe fixed thier mess up so that’s something I guess

However, as you seem to be someone who is serious about their writing, this sounds like the kind of place that could easily provide you with a novel’s worth of material.

I would love to write an NJ food book. Perhaps combining all of my reviews. However, I wouldn’t want it to be like a typical “restaurant guide” but more like a source of reviews with an edge (I guess you could say). However, given some of the incidents to occur at various restaurants (Reo Diner and Zhang’s Grille to name a couple), I could probably get sued.

I have written one book already, a small book about folklore published by the museum I volunteer at. It cost a ton of money, which they thankfully put out.

Hell, a nationwide “Hungry Onion Guidebook” would be epic.

Oh yes, I remember. When I worked at a school, I went in the cafeteria kitchen for something and saw an opened bag of that nacho cheese sitting out on a shelf. I thought, “Hmm that should be refrigerated”. But I didn’t touch it, figuring it would be put away by kitchen staff. I checked the next day, and sure enough it was still there, and the day after, so on and so forth. On that Friday, they hooked it up to a pump to make it easier to serve. I inquired about the refrigeration status and was told that such cheese did not need to be refrigerated even after opened. God knows what additives they use to achieve that. No one ever got sick or died so I guess they are right.

Now THAT is how you tell a story. Like ripping off a band-aid. None of that “Chapter 2 tomorrow crap”!

None of that “Chapter 2 tomorrow crap”!

It takes me forever to compose these stories, lots of thinking and slow typing. 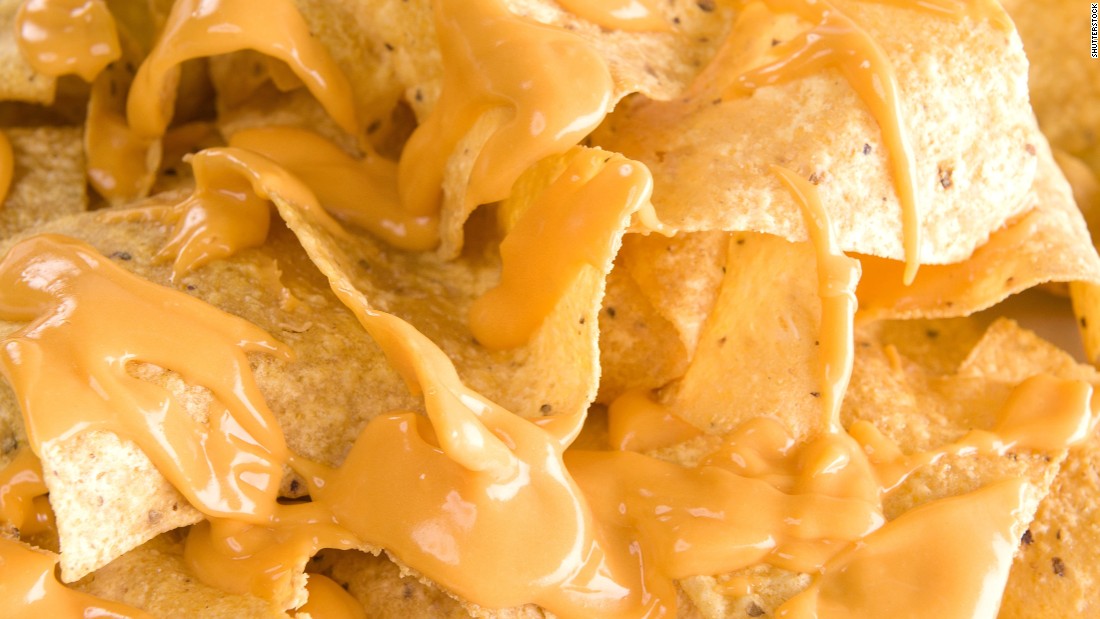 One person has died and nine others have been hospitalized after contracting botulism from eating nacho cheese sauce served at a gas station in California, according to state officials.

I am convinced that “nacho cheese” is more closely related to melted plastic than it is actual cheese.

And I really hope that since this epic day of shitty food you had an epic day of awesome eats to make it up!

I agree re: the plastic.

As for today, I had no appetite. However, that subsided and am currently working on a Korean marinated flank steak.

This stuff is horrible, the original nachos were cheddar on individual chips with a jalapeno slice.

I think this product can kill fresh out of the can.

You are probably too young to appreciate this reference but on behalf of Bob Grant, he would kick your ass for reviewing the Reo so badly!!! I’ve only been back a handful of times over the years, but back in the day Greg, the Reo did more business between midnight and 5am than any restaurant / diner in the state of NJ. It was literally the after party for central Jersey the place would be railed every Friday and Saturday night. For awhile they even had a DJ, or maybe random DJ’s just set up, I don’t really remember it’s all just a fog.

That’s probably what keeps them in business. On my four or five visits (daytime and early evening), the clientele has been white-haired and dwindling.

Your post reminds me of my vast experiences at the Menlo Park Diner with my ex. I’d be leaving at 2 am but it seemed like that’s when the party was getting started.

Menlo Park Diner!! Now you are really talking my stomping grounds, I’m originally from Edison moved south in 94’. I did my one and only dash and dine at the Menlo Park Diner.

Well, the food gods heard my complaining and gave some balance to the universe. Exactly one week after arguably the worst day for food I’ve ever had, I had perhaps the best day: February 14. Outstanding lunch at an Indian restaurant in Lancaster City, followed by an unbelievable dinner out in the country. Yes, this happened in PA, but I’ll take it. Reviews from my trip are being posted in the Philly board for anyone interested.

Thank you food gods. I shall sacrifice an onion in your honor!