38 restaurants NYers say they will eat the rest of their lives... 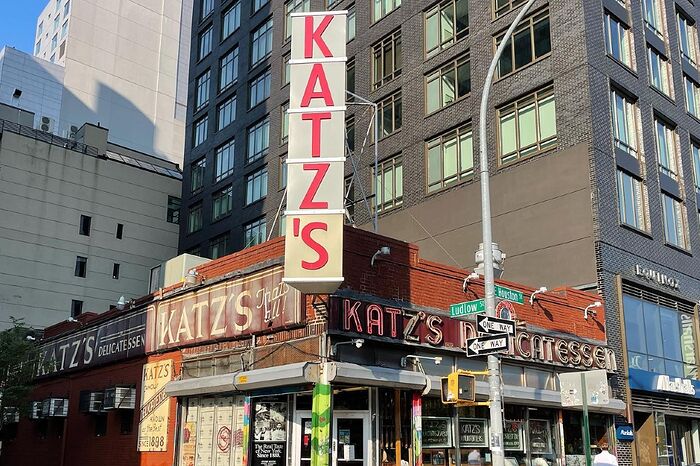 We asked our following, if they could only eat at one NYC restaurant for the rest of their life, and the votes are in.

I like plenty of those, but no way could I ever confine myself to a single restaurant. And no love for Chinese food? What’s up with that?

Is Luger’s in the West Village these days?
Ortebello is still there? Looks like I need to bring up old memories. We took my mother there over 30 years ago. I thought it’d be long gone, as the owners were older than me by a lot. The son must’ve taken over.
Jackson Diner? Have they come back to being good?
So many places that just dont make sense.
At least Park Side is #2. If I had to participate in this survey, it might well be my #2.

This would be a great story if it were the same restaurant.

True ! But it wasn’t LOL. Horribly salty meal at Carmine’s at Times Square , delicious pasta tasting at Lupa. The other place where I’ve dined on the list is Balthazar, although it’s possible I’ve eaten at Vincent’s and wasn’t paying attention to the name of the restaurant. I’ve probably eaten in Little Italy 4 or 5 times between 1997 and 2007, when someone else chose the restaurant, and I can’t tell you where I ate.

I would pick La Grenouille* because I adore French cuisine, and the food is superb. I would not find it difficult to eat foie gras, the exquisite Dover sole with mustard sauce, and their fabulous souffles (so many flavors) for the rest of my life. I was actually surprised to see it on the list. Two other French restaurants made the list. Balthazar doesn’t surprise me since it’s very popular. We’ve been there twice, one good experience and the other terrible. As for Lafayette, we went once and found the food disappointing.

Edited to add: The other restaurants on the list I’ve been to are Carbone, Keens, Lupa, Katz’s, and Gramercy Tavern.

I find this list very confusing. The premise is pick one place you could eat at for the rest of your life. Was this an online poll? My thoughts on the list (also posting the list so you do not have to click on the link).

So of this list, there are maybe 5 of these I can understand. Most of my favorites didn’t make the list.

I keep meaning to try Gramercy Tavern and Keen’s on trips to Manhattan, but it’s never happened. They’ve been on the shortlist with one friend I’ve met up with, but we almost always head to a New American, a new Mediterranean place of some sort, or Italian, which have usually been very good meals, but interesting, to me at least, most of those places we have dined have closed over the past 5 years.

Out of the places I remember dining at with this friend, Crispo, The Loyal, Louro (which closed a long time ago, in 2015, it probably only was in business 2 years) , Mercadito and The Spotted Pig have closed , not sure about Hearth (probably closed). Lupo and Perry St remain open. I’ll have to finally check Keen’s, Gramercy Tavern & La Grenouille off my list some day.

Hearth is open. Crispo is closed. Dave Santos of Louro does popups and sells prepared food.

I was dismayed to learn that Crispo closed. I only went there once or twice, but it was really good back then (easily over a decade ago), and reasonably priced.

It was well-regarded and very popular. I don’t recall seeing any reports about its closing, but I’ll speculate it was pandemic-related.

Still open and still excellent. The menu changed over the years but never a dull dish

Crispo was good, but I dont miss it. It was especially good for large groups

Strange list. The first entry screams to me that the respondents were tourists. Grimaldi’s is packed with people fresh off of tour buses. The last choice of Rao’s is curious. Everyone has heard of it but I only know one guy who has actually been. An impossible reservation supposedly only open to people who know the owner or someone who does. Has anyone been?

I could see Balthazar, Lupa, Raoul’s, GT too. I also like Nobu but you have to know what to order. Really liked the original spot. The new place is a bit too flashy. I have not been to Le Grenouille in many years. I need to go back there for some real OG French. Most of its kind are all gone.

And no love for Chinese food?

Not even the obligatory NY Noodletown

Right? Lots of variety there!

If they would have asked my neighbor in Staten Island, Olive Garden would have made the list. In NYC, or anywhere for that matter, asking locals for food advice doesnt work

btw I never even heard of Max’s Esca

it’s impossible to know who or how many people they surveyed but picnic garden in flushing seems to me the like the least likely selection . The combination of queens location coupled with the idea one has to take a train and a bus to get there, makes it seem unlikely to have garnered many votes.

My guess is they surveyed their staff and some friends.

who or how many people they surveyed

They will guard that to the death. But we can enjoy speculating which New Yorkers picked those