Yes, it’s a lot of work. But if you love doing it, it’s fun. I don’t watch TV, so there’s time to play outside. Not today though, awful ice-snow-rain mix falling.

I figured the masses of tomato plants would die out between the fungus that made its way through and the bitterly cold (for SoCal) weather. But… there were still a few little engines that could.

So over the past few days I’ve been cutting everything dead off the survivors and adding supports, feeding them, and so on.

Meanwhile, some tiny herb plants - that weren’t doing much while the tomatoes thrived - have colonized some of those pots, which is interesting. So I have three giant pots of parsley, a couple with rosemary (still tentative, surprisingly, because it grows like crazy in the wild around here), plus one of mint (that I cut some stems off the other plant as a regrowth experiment) that’s starting to do very well. 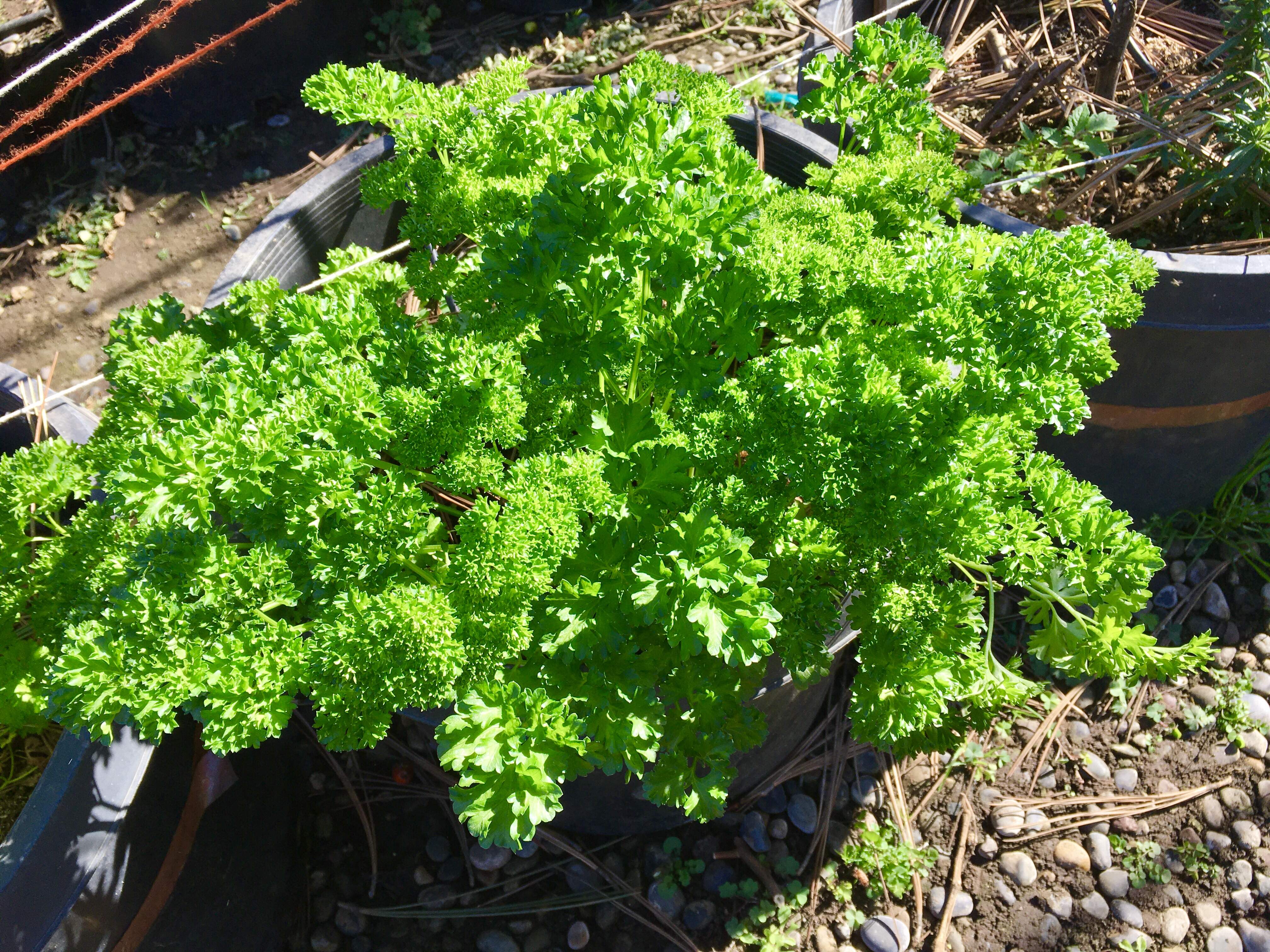 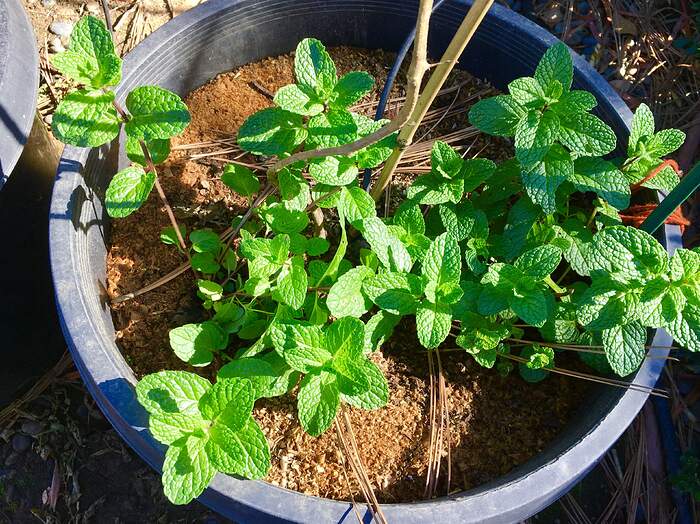 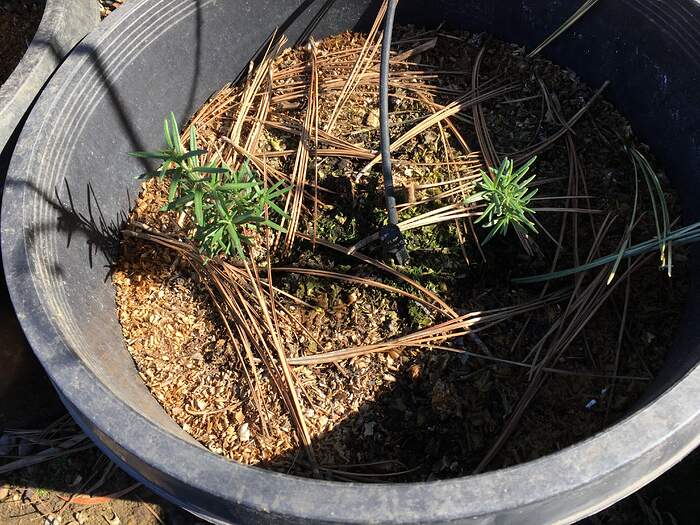 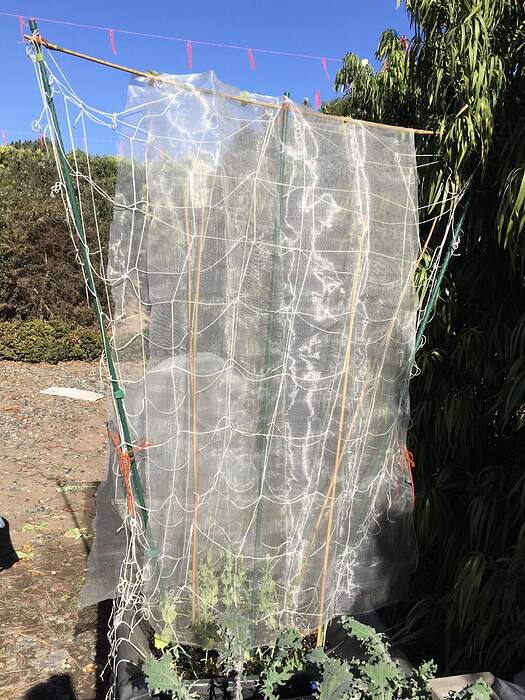 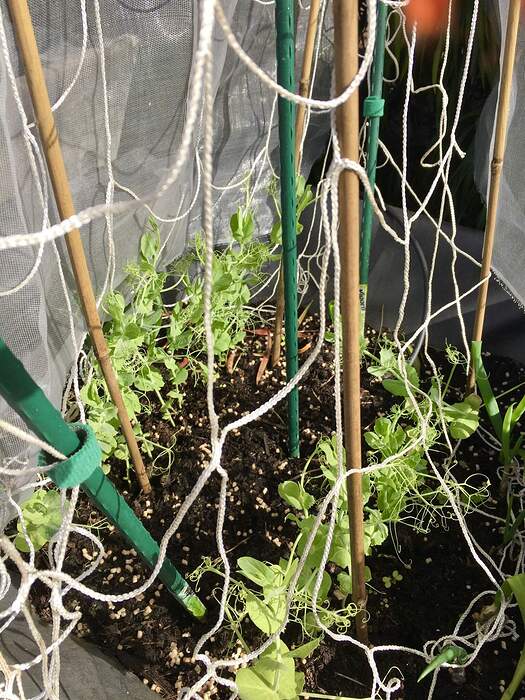 And I moved the poor dehydrated papaya plants into bigger pots - hoping they will survive, apparently they hate transplantation. But they’re little trees now, and the pots were way too small. Hoping that some food, water, and a bigger home will bring them back. 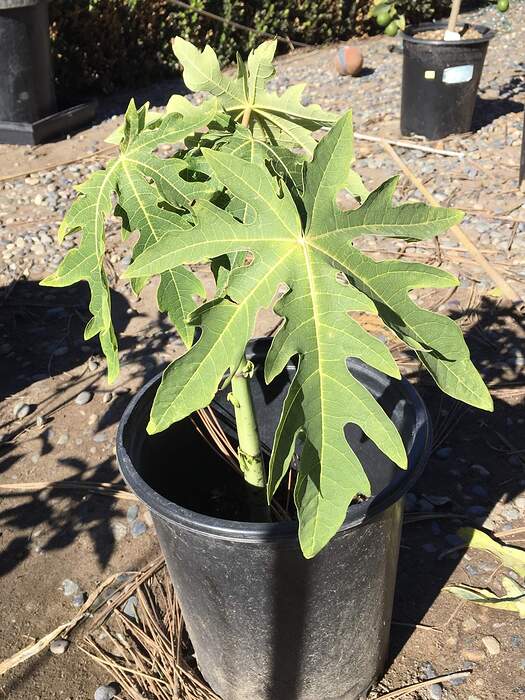 Kale is still going strong, except for an intermittent fungus issue that the green-thumbed neighbor says I can’t do anything about, but I need to research. 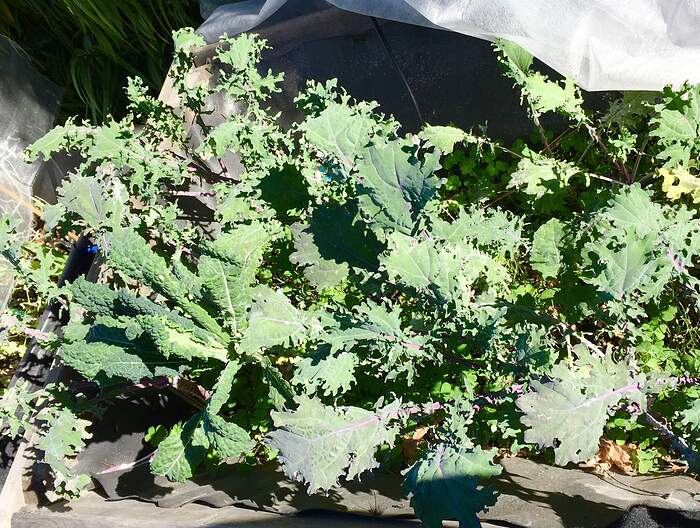 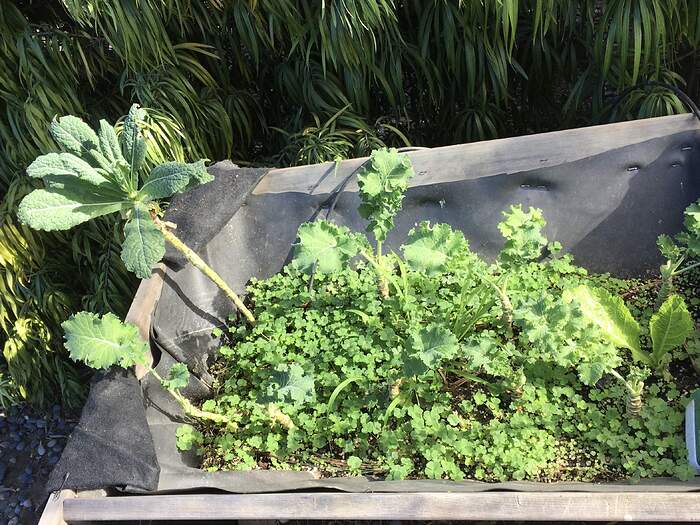 Harvested my first beets, and replanted the ones that need to grow more, giving them more space. Interestingly, one of the beet stubs I had stuck in the pot along with seeds actually regenerated! The other ones sprouted leaves, but stayed flat, and all research had indicated that’s all that would happen. So strange, and also wonderful! 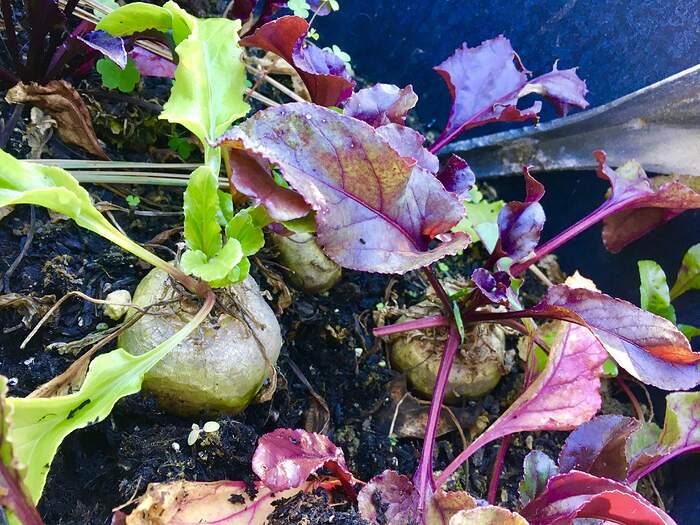 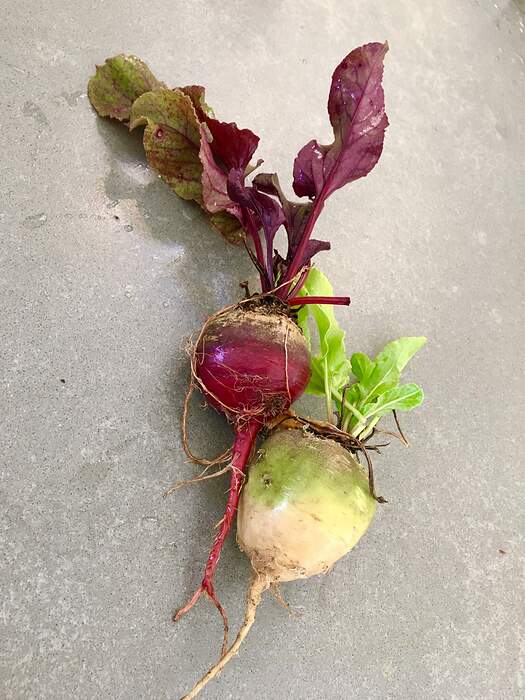 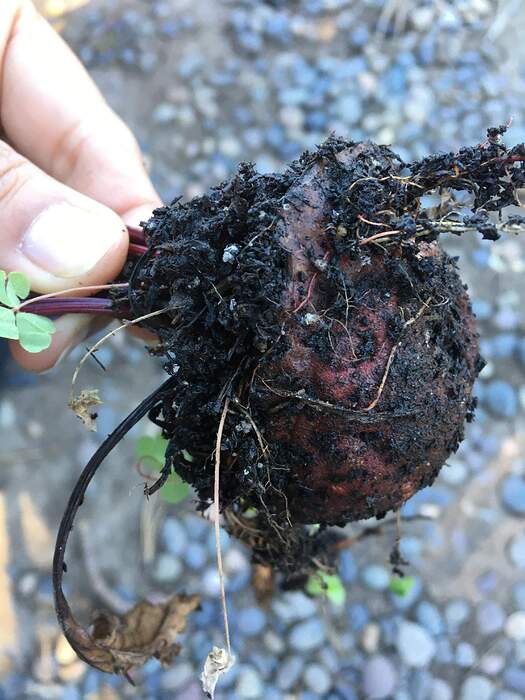 I had stuck some scallion ends in two small pots and they have done miserably this whole time, so I moved them into empty tomato pots - let’s see if the space and constant water supply changes things. Other scallion ends that I stuck into other plant pots have done swimmingly, so it’s a puzzle.

Final (I think?) remedial work today was to repot the lemongrass to give it more space in the hope that it will get going again - I split it into 3 pots. 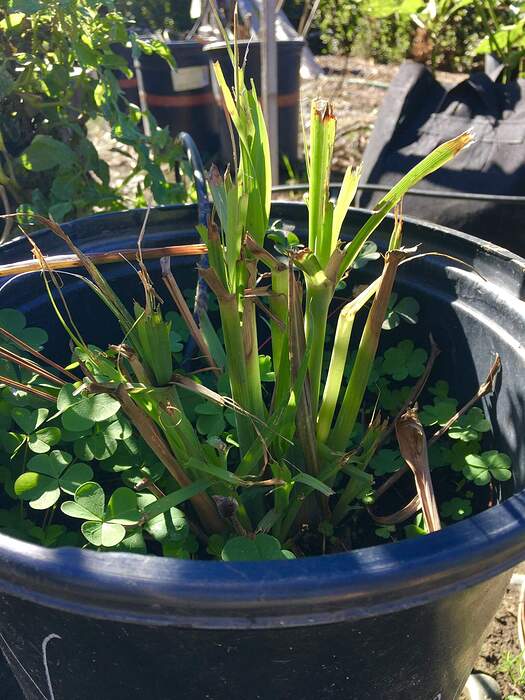 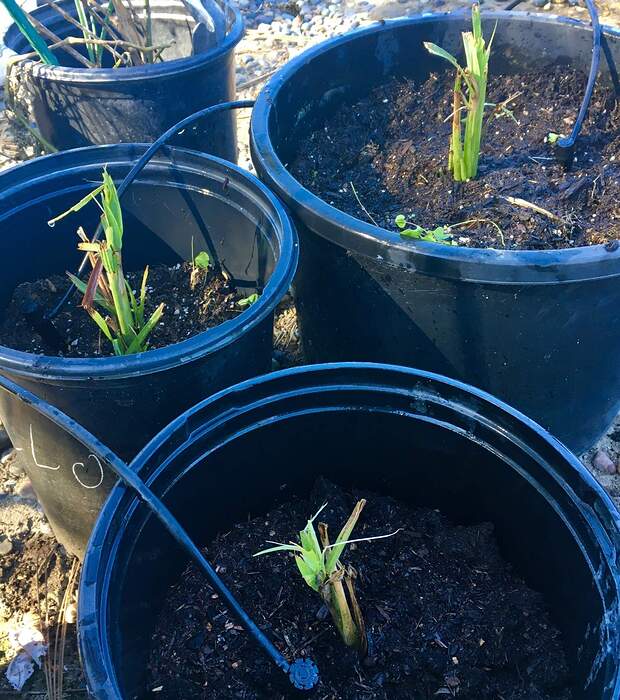 Oh yes. Something needs to be done about the peppers. Maybe next week. Surprise (duh) to me was that I have red peppers growing too! They took forever to turn red. 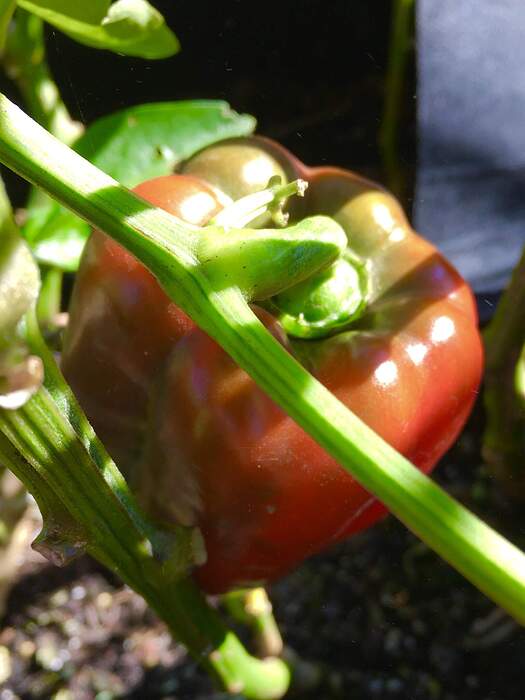 Phew. That’s what months of neglect does. I’m feeling so much better now that the plants have been tended to!

I’m duly impressed that some tomatoes are still going - it was pretty cold here at night for a couple of weeks, and is again.

I have a few tomatoes ripening as well! I pulled up the plant, and they are still ripening.

We’re in for some deadly cold Christmas night, low teens F (around -9C). That’ll trash the mustards, so I’m busily harvesting, pickling, fermenting, cooking the last greens of the year. Yesterday, Wrapped Heart Mustard (Kekkyu Takana) was harvested and processed. I love the seashell-like look of the inner heads. Here, the outer leaves have been removed, revealing the hearts: 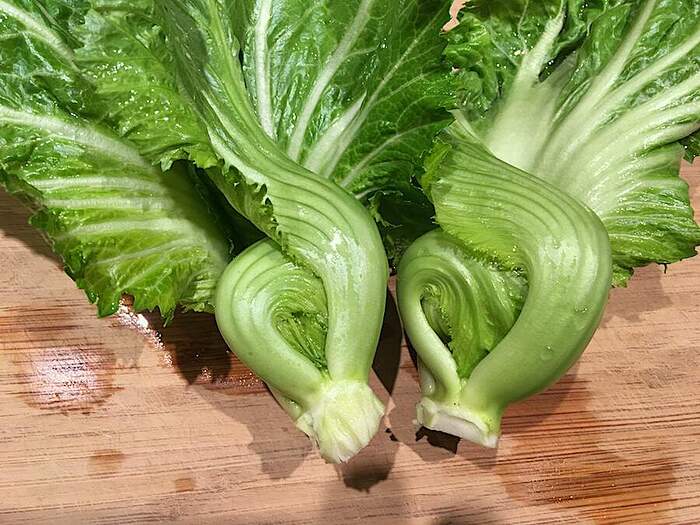 Unlike most mustard greens in the US, the Chinese types often have very thick, succulent stems, which are quite tender. Stir fried, they remain crunchy, but they can also be cooked “southern style” with smoked ham (meat and/or bone), salt and pepper.

The thick stem, midveins are prone to damage during a deep freeze. With the Horned Mustard above, I’m finding some “horns” froze off, because those are succulent, juicy, as well. I’ll try to harvest the rest of the mustard rows today, once they un-wilt. Right now, at 24 degrees F (-4 C), the plants have wilted down so the expanding ice doesn’t make their cells explode. Once it warms up, they’ll pop back into a normal texture.

the plants have wilted down so the expanding ice doesn’t make their cells explode. Once it warms up, they’ll pop back into a normal texture.

This is fascinating to me!

This is fascinating to me!

Me too!
My husband bought me a greenhouse heater for Christmas (

even though I told him I was not ready, and wasn’t sure if i wanted to heat this greenhouse…).

I think I need to deal with my aphids and whiteflies first. I’m thinking of releasing some beneficial insects. I’ve also got yellow and blue sticky traps (for monitoring?), and vacuums, water spray, insecticidal soap, neem oil, and most of the rest of the usual suspects.

Here are some recent pictures. The droplets are “honeydew” from either aphids or whiteflies. 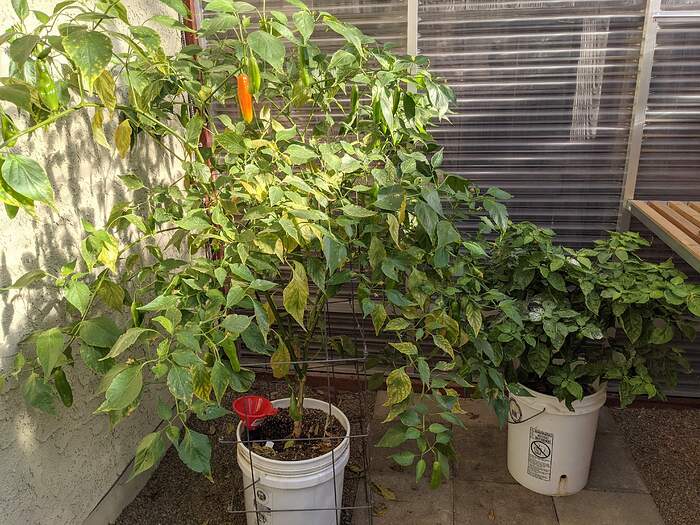 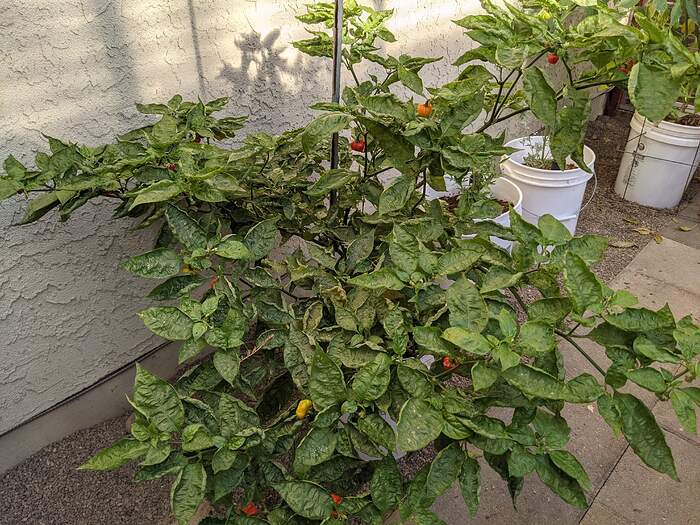 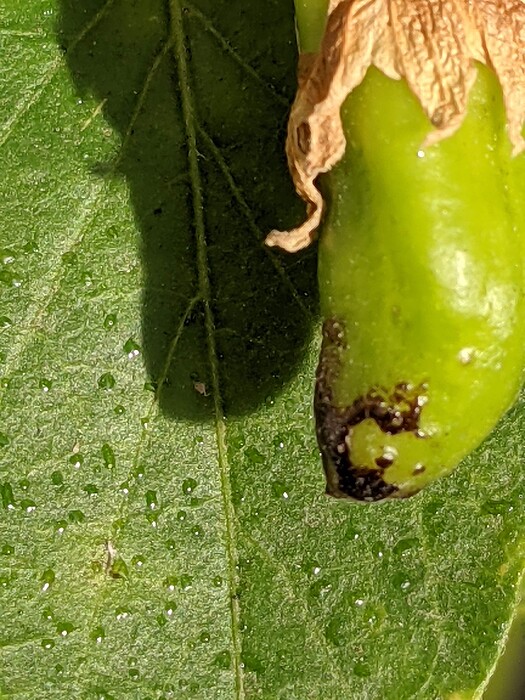 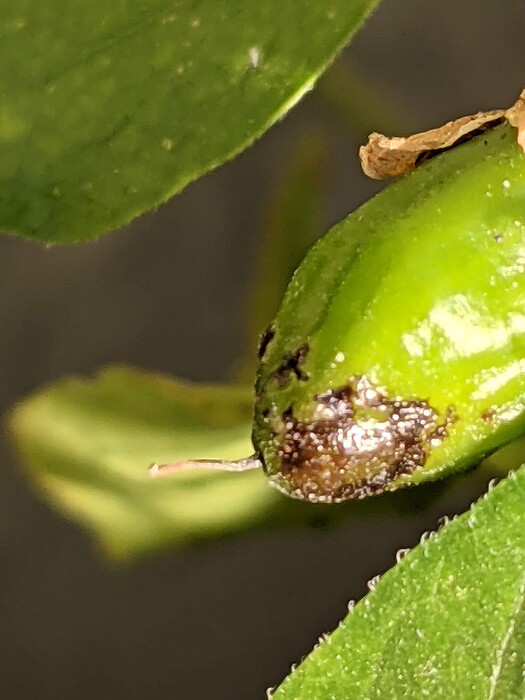 I just picked most of the ripe peppers on the chinenses, so maybe I should cut those plants back. Not sure if feeding the Aji Amarillo is a good idea or not, even though they look like they need it.

Some of today’s peppers. 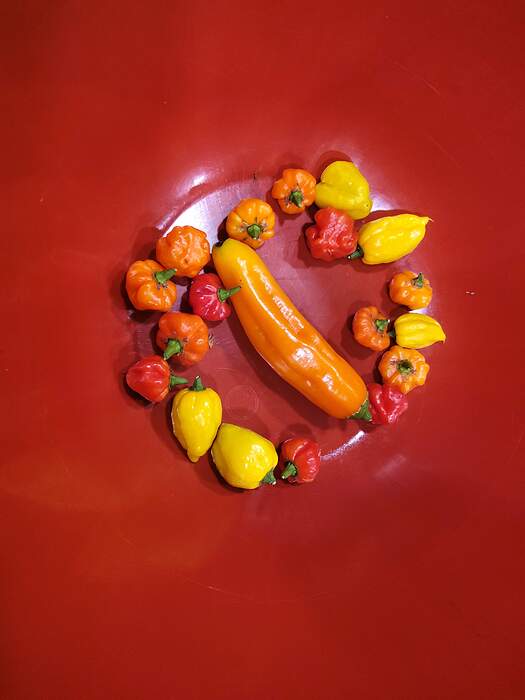 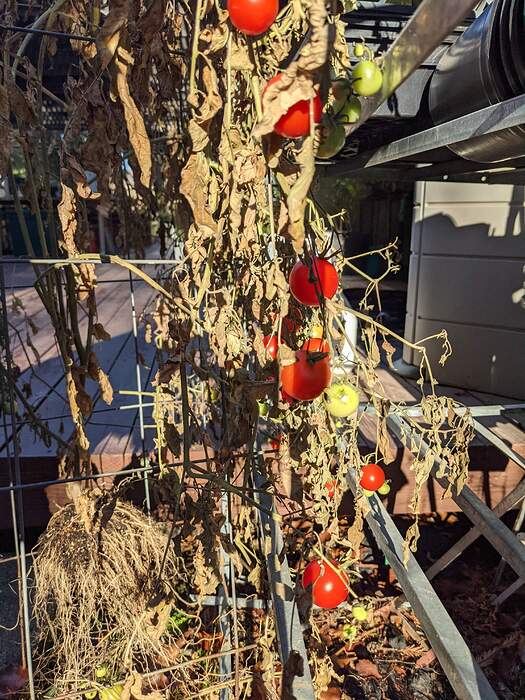 Oranges from the neighbor. 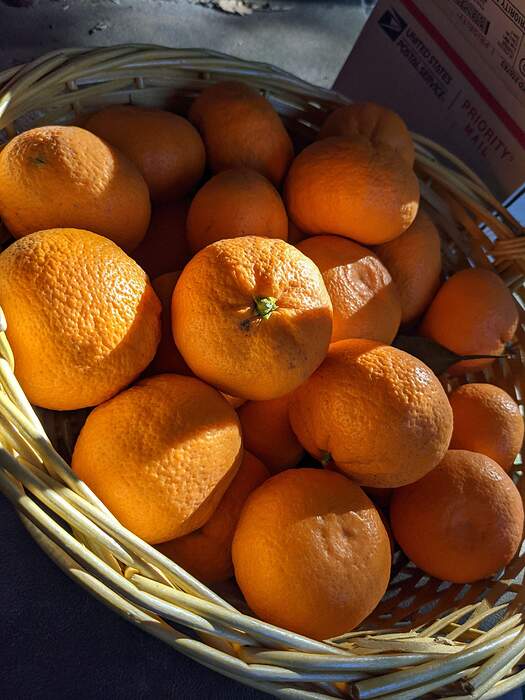 Pretty assortment of peppers, shrinkrap! Predators might be a good idea, especially if it’s hard for them to get out of the greenhouse. That new heater might be handy for getting the temperatures up to whatever is optimal for the predators. The main thing is to read about what the good bugs need. Sometimes, it’s a daily mist of water, or a certain temperature range.

I had a fellow at a farmer’s market swear that regular Dawn dish soap and water was the best insecticide. This is an interesting read and uses a mix of ingredients. Follow the sensitivity test and keep a few things in mind:
•Don’t use detergent/soap sprays when it’s very hot; these are best applied at dusk.
•Thorough coverage, over, under, top to bottom is critical. Here, a pump-up sprayer
with a wand is easier than a trigger type sprayer.
•Rinse off harvested produce with warm water and a soft brush!

Right before Christmas night’s deep freeze, I harvested about 4 gallons of Aji Amarillo. Most had some green on them; all had a decent amount of orange, so they’ll after ripen well. The next morning, it was 16 degrees F (-9 C) outdoors. When I checked the Aji tent, it was OK! The low, inside the tent, went down to 38 F (3 C), so the pepper plants escaped freezing.

Shrinkrap, if your peppers look like they could use some feeding, it’d be best to knock the pest population back first, if you can. The unwelcome insects suck a lot of sap and the honeydew excreted is excess sugars the bugs don’t need. The insects are filtering for other nutrients, like Nitrogen/nitrates. Feed the plants and you’ll feed the bugs. So, it’s best to feed after attacking the pests, if possible.

Lots of good info; thank you!

New year, new thread! Happy gardening everyone! I haven’t been doing much gardening, except I’ve ordered some new plants like a hazel nut tree and several raspberries bushes in December, add soil in certain pots. Also repot certain plants that are growing too big. Also a lot of cleaning. I need to find time soon to repot and treat a peach tree that has serious leaf curl problem, it may be a bit too late now, I should have done it in late autumn. A question on fava beans, been growing them annu…

Spiders are an absolutely fascinating species. Every once in a while I can’t sleep at night . I go out on the front porch.and they are just spinning away. The whole web is done. In the morning it’s gone…