With the recent dip in temperature and wet days, I get a few cherries every few days, but the bigger ones will probably remain green. I see a temperature raise next week, maybe I will wait a week more before getting all the greens indoors.

Thanks Lambchop! Gardening can be so challenging at times. With all the varieties and new vegetables becoming available, we’re all learning.

Man, these 70 degree days and 50 degree nights are making collards go nuts! Here’s today’s picking, which was limited by how much processing time was available! Stacks of tender leaves. 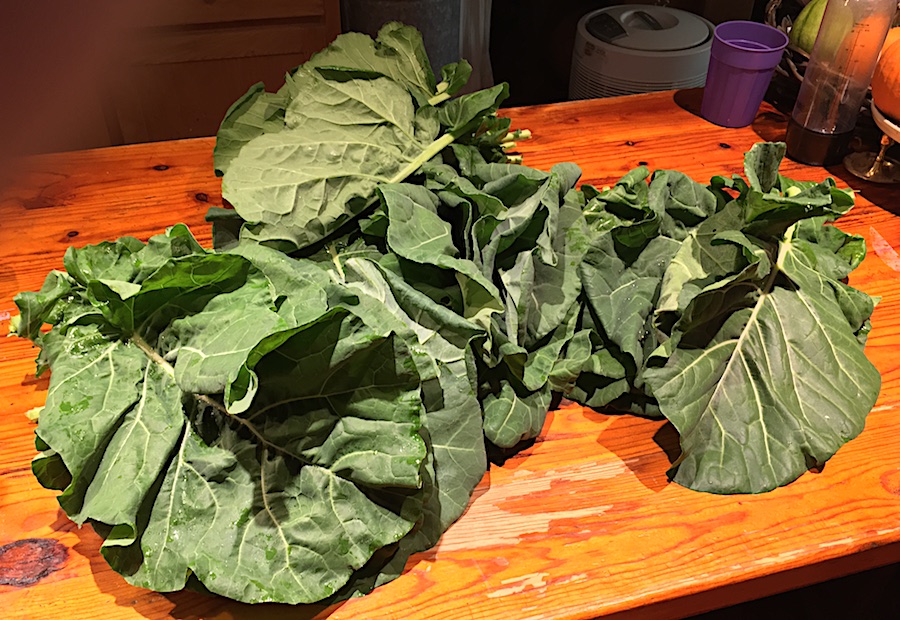 Some of the leaves are huge. 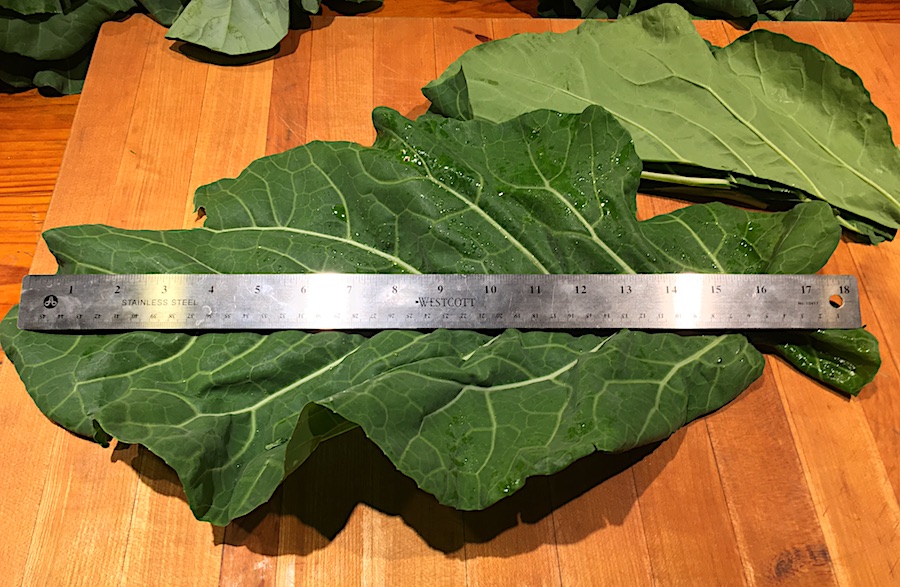 Just one or two leaves were snapped off each plant; it’s a long row!

How are you processing them? No that I ever have that much.

In the past, I’ve cooked the collards with whatever seasonings and packed them tightly into freezer bags. In a deep freezer, they’ll last about a year and still taste good. This year, I’m leaning towards cooking, then freeze drying. The freezer is packed and frozen foods don’t keep as long as freeze dried. Plus, being able to store FD’d foods at room temperature for 10-20 years is appealing!

Canning collards is an option, but it’s low acid so would need pressure canning for a long time (i.e. 90 minutes) to prevent botulism

. The same is true for green beans, which, when canned, should be called “grey beans”.

The freezer is packed and over 30 years old! That’s worrisome at a time when freezer supplies are often non-existent, due to demand initiated by the pandemic. So, whatever works, tastes good and makes a good freeze dried product gets that processing.

I’ve loved collards since 1980, so that’s not going to change. In fact, I can’t think of a vegetable or fruit I don’t like, even Durian! Though, because of the smell, I’d never freeze dry Durian; it’d funk-up the machine so much it’s require a major cleaning, LOL! I’ve resisted freeze drying garlic for the same reason.

That’d be wonderful! But 60 years out of a “modern” freezer… not counting on it. There is a temperature monitor which has a wireless “base station” on the upstairs fridge. The temperatures of the basement freezer and kitchen fridge can be seen at a glance. Very handy, especially if a circuit breaker trips. Cheap insurance.

There are some Collards “Kim Chi” and other fermented collards recipes/methods which might get tried. A smoky ferment, with Morita chlies, might be good. The fermentation crocks are empty, as the cucumber pickles are all jarred and refrigerated. Glad that 18 pounds of cukes which went into the deli-style pickles came out great! I really like those and there are a lot of them.

I meant here’s to each of us getting thirty more years from today.

Much better!
And, much more likely. (Apologies for the misinterpretation.)

While weeding the mustards, I came across a lonely radish, one that apparently sprouted from “impure” seed. No pedigree, no fine breeding, poor “Cheeky” the radish had bad skin, and didn’t look like much from the surface. 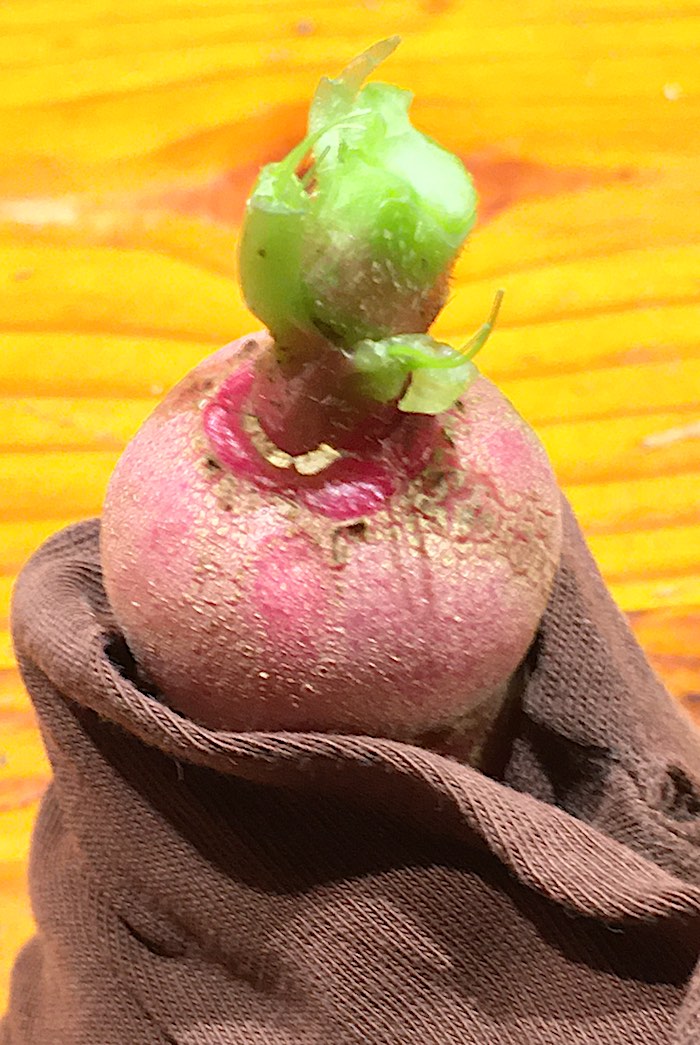 The suspected parents were Pink Beauty and Flamboyant; lonely Cheeky was neither of these. But, like so many mistakes we make when we judge things by the surface, by appearance, beneath the surface, Cheeky had certain obvious “qualities”. 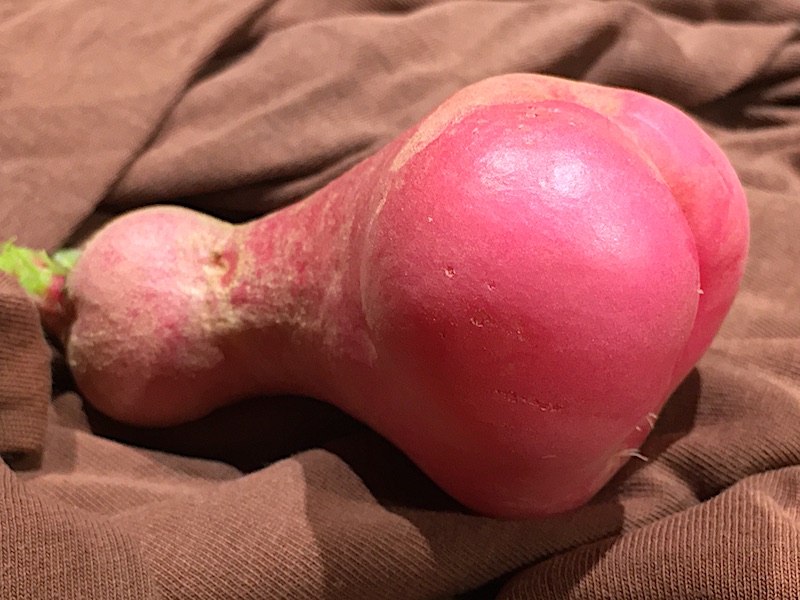 Oh my! Cheeky is one sexy radish!

If s/he needs a date, this bidpedal carrot i grew a few years back may be interested! 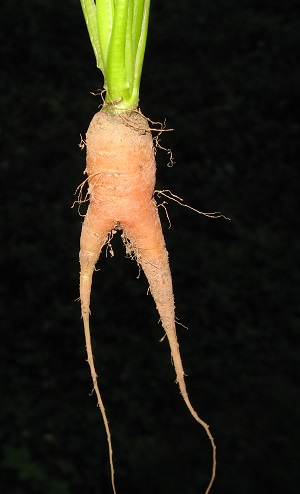 I believe Cheeky prefers to be called “non-binary”!

Mmmm…I’m going to have to swipe left.

Feedback =above edited. Truth be told, radishes have “perfect” flowers, making them both male and female. This is true of most plants. Plant breeders may have female or male radishes, to create hybrids, but it’s not something I’ve come across after growing thousands of them.

Resistance broke down, couldn’t wait any longer to harvest a finocchio! 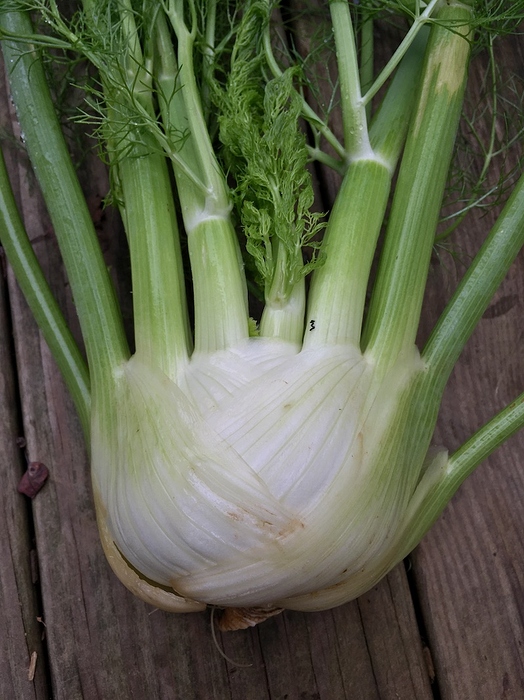 The rest were left to mature a bit more, although they are quite large already.

Though not technically “gardening”, the shiitake logs have buttons popping out. 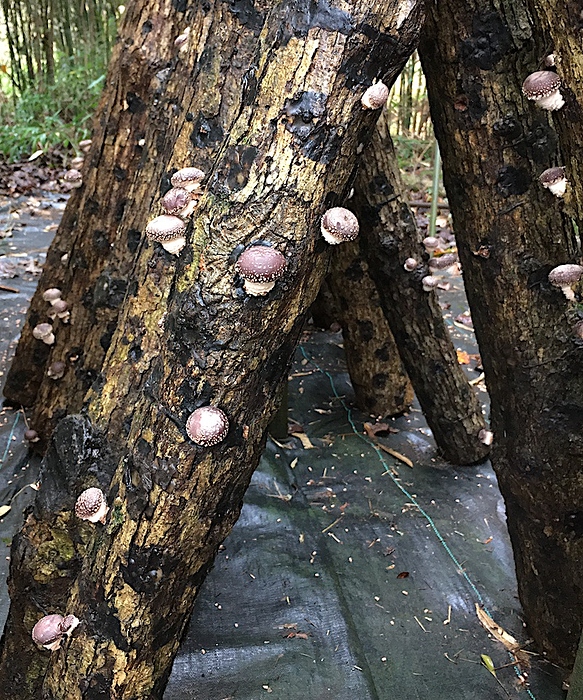 Buttons, buttons, how about some social distancing! 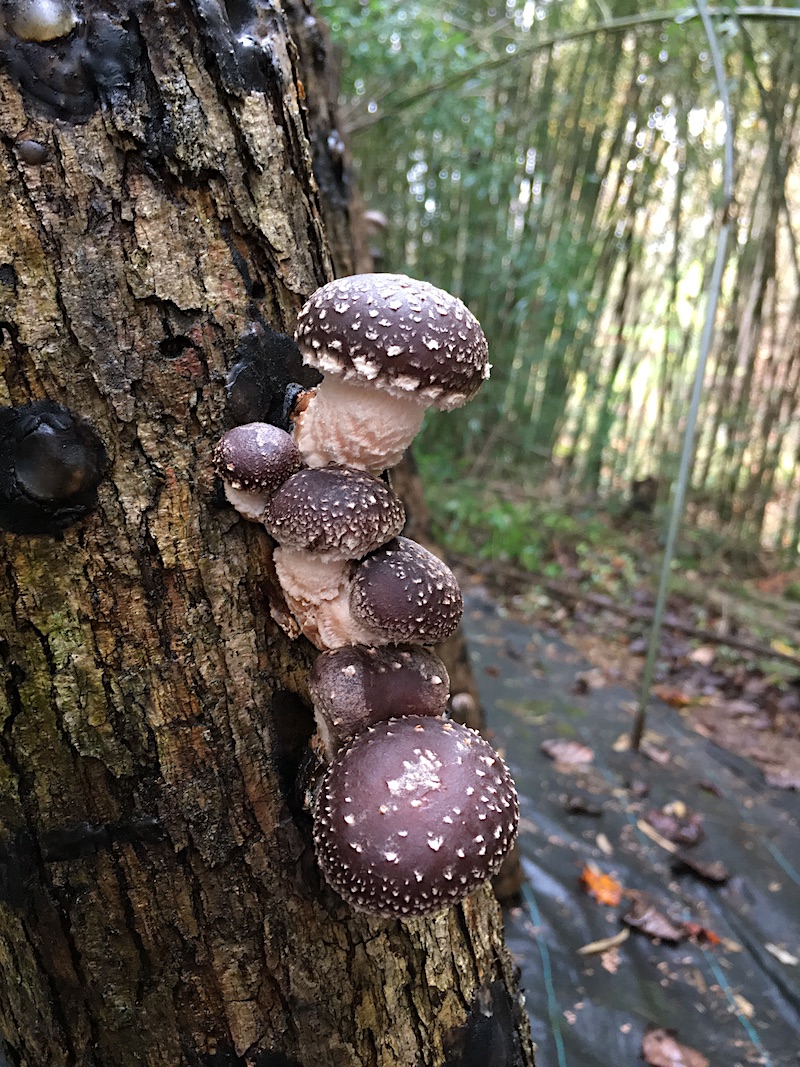 I hope they mature before Friday night, when frost is possible.

You harvest the shitake before a frost? What will you do with the fennel? I have one small bulb to eat.

I think part of it will get sliced thin, with oranges, in a salad and the bulk of it steamed in chicken bouillon, which is easy and tasty. I’m making a red/black bean dish tonight, sort of a chili made with smoked ham, moritas, onions, etc. When I cook the smoked ham bone and scraps for stock, the fennel green leaf stems(petioles) will get tossed in. I’ve been munching them, but they’re a bit stringy. What’s odd is the ferny foliage doesn’t have much taste. Herb fennel has more flavor in the foliage.

Normally, it’s best if the shiitake pop out when there’s no chance of freezing. However, they do what they do based on often unknown triggers. Hard frost turns them to mush. There is a tent structure which can be put over them if necessary. From the looks of the buttons, they should be ready, at least most of them, by Friday morning. After Friday, the forecast includes a bunch of potentially frosty nights…sigh. that’ll kill the beans.

sliced thin, with oranges, in a salad

One of my favorites!

I just discovered a measly bulb in the fridge that someone must have ordered and forgotten about, and I finally have oranges when I need them (I keep ordering, someone else keeps using up

) so thank you for the reminder!

Jealous of your home-grown, and also those gorgeous buttons!

We grew up eating fresh fennel seeds off the stalk - it blew my mind a little the first time I picked them off a bush somewhere in the Hudson valley where the fennel was growing wild!