Thanks for the info. I’ll try to repot the cymbidium into 2 pots next spring, and as a test, will bring one pot indoors, and another outdoor to see how things go. I dislike the winter indoor makes the leaves exceptionally long due to low light.

Segueing soon into the 2021 garden, and as usual, transitioning with sweet and snap peas, and alliums; garlic and shallots.

I have been soaking my garlic before planting as first chronicled here, motivated by garlic I brought back from a trip Italy:

Peeling garlic a week before planting

I have the good fortune of being in Florence right now,and see the most amazing looking "Aglio Rosso" garlic at the market. I want to bring some home to grow, but you can only bring peeled cloves. I would end up arriving home about about three days...

Unfortunately, in my zeal, I lost the stone from my 30+ year old engagement/wedding ring. My tears provided the first watering.

The first attempt finished with rubbing alcohol; this year I used the Martha Stewart link, and started with it.

Planting Garlic at My Farm - The Martha Stewart Blog

Our big fall planting project continues at my Bedford, New York farm. With the arrival of our first hard frost and several cold and windy days, everyone is [&hellip...

Shrinkrap, that’s terrible about the stone! Maybe it’ll turn up when you repot or mix the soil around; here’s hoping for a pleasant surprise! Yaneverknow.

Small leaves on Yellow Potato onions, grey and red shallots have formed, which means they’ve probably rooted. That’s good, as they’re less likely to frost-heave. I’ll put some light mulch on them when it goes below 15-20 F. These are my test plants, to see if they can be raised under insect netting to keep Onion Fly, maggots from ruining them. If these, and maybe a bunch of spring-sown leeks, survive, garlic will be planned for 2021 planting.

Many years ago I planted garlic in the ground with little thought, and for my first attempts, it was very rewarding, reinforcing. ( Not unlike my first child, which at the time, I attributed to parenting. )

When things didn’t work out ( in the garden) , I attributed problems to root rot nematode, then root competition. Then I started in containers. Most have been unsuccessful, but last year I planted in 5 gallon buckets, and it was encouraging. Not scientific, but I have also been soaking cloves, and I have been focusing on creoles.

Also, I convinced me and the hubs, ( and hopefully insurance,) that it’s time for a new ring!

The lost one was bought during medical school for hubs, and active duty AF, during a war for me. Some things, but not all, are better.

I don’t see anything on this board about flowers in general, so I’ll throw it on this one if you don’t mind. We are expecting our first frost in the morning so I said goodbye to my petunias and climbing vincas tonight. They’ve kept me company for almost 8 months now… Walking out on the porch was a joy. I’ll miss them… badly,

The non edible garden is here.

Our beautiful gardens (a break from food farming) Not About Food

ornamental stuff, ( Jap maple, rare boxwood, dwarf conifers, camellias,) 8 hours a day weather permitting Right now, I have a battle with grass and chickweeds that has been going on for weeks in one area and german moss on other area. Unfortunately, I rarely spray bec I do not like my dogs to be in contact with those herbicide as well as not being able to carry the sprayer my back( forget about laborers, useless, too expensive) Cannot use any thing on my lawn as I am only using micro clover,…

Autumn is always a bit sad for gardening.

Last harvest. Loved having scallions available in the garden when needed. Took a long time to be more than barely visible green threads but lasted and lasted til yesterday’s picking. There was a thread about soaking garlic prior to planting on gardenweb, and in researching my argument/justification for soaking mine, I found these.

Rasa Creek Garlic Farm, located in BC, Canada, grows over 50 varieties of softneck and hardneck certified organic seed garlic. Online sales and bulk pricing for garlic farms. Learn how farming garlic can be profitable for you. Small garlic farm...

Couldn’t find any double blinded studies but her are some other opinions supporting some form of prs-soaking. 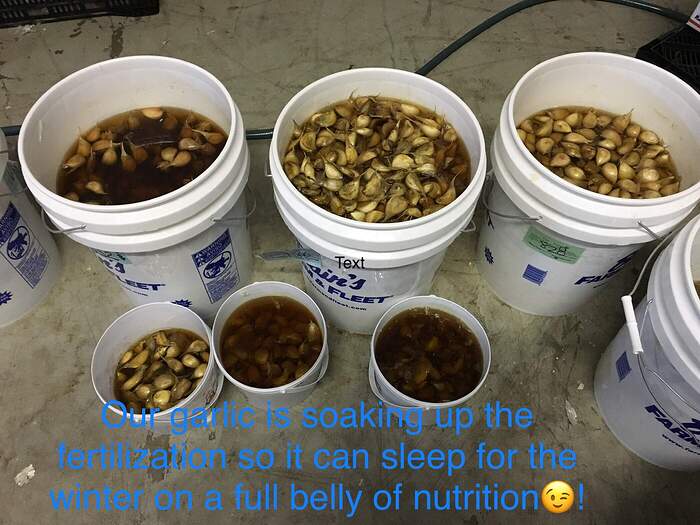 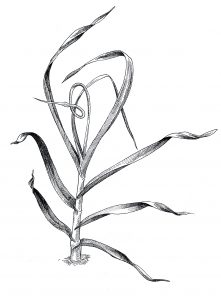 Soil Garlic, like many crops, likes rich, well drained, friable soil with plenty of organic matter and a ph between 6.5 and 7. Soil content can greatly affect garlic; for example, sulfur rich soil will produce more pungent garlic, while iron levels...

Planting and Growing the Garlic

This is part of it. Sustainable Market Farming

Among other things, It says “Many of us do nothing special with the cloves before planting, but if you have pest and disease problems, use pre-plant soaking treatments, usually done the night before planting. Some growers find they get better yields from treated cloves even if no problem was obvious.”

OTOH, one really useful response of an alternative opinion came from MikeG of Chowhound in this thread.

Read the Peeling garlic a week before planting discussion from the Chowhound Gardening, Garlic food community. Join the discussion today.

Is that the same @MikeG on HO?

Will read your garlic research with interest. For the wild garlic that I’ve got, initially I wanted to buy the cloves, but they were sold out, the only choice left were in pots. If they work well, next year will plant more cloves. Love the fact they like shady areas.

Thank you, Shrinkrap! Interesting garlic presoak information. I may have to do a side-by-side test someday, see if it makes a difference here. I know one thing: no fish emulsion out here! Raccoons and opossums will dig up anything that smells like that, even Garden Tone!

Thanks for all the garlic info, tho I’ve only planted the cloves with no prep at all and never a problem. I went overboard this year ordering from Keene and even after giving half to my sister I have one entire raised bed filled!!

@shrinkrap - I’m soooo sorry to hear of your lost gem! My hope is that it turns up in your lovingly tended and productive garden.

It might be in here somewhere, where I was preparing to plant shallots. 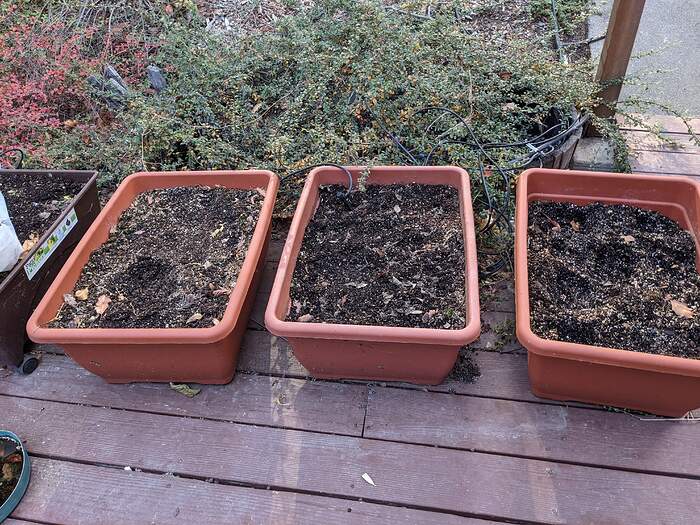 This is the garlic I planted after I wiped my nose. 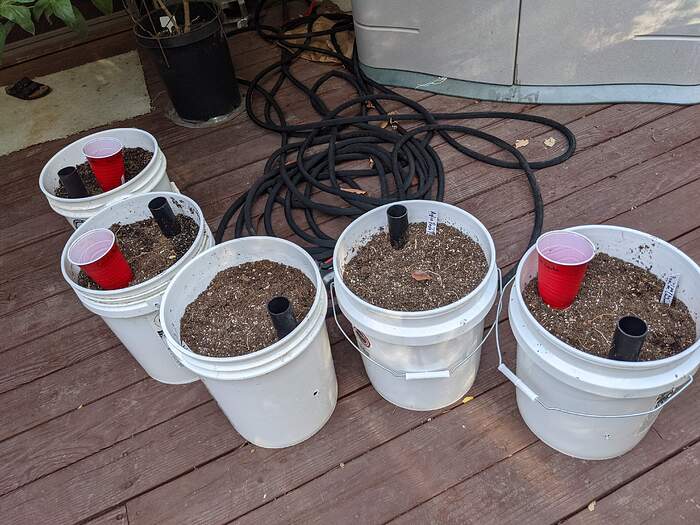 The 2020 late season here has, so far, been much warmer than normal. Frost date was one month later, and the Radicchios have not been killed back by freezing, which typically happens around mid Nov. It has grown huge, but is far too bitter to eat yet. The Castelfranco are about 2 feet (.6 meters) across. 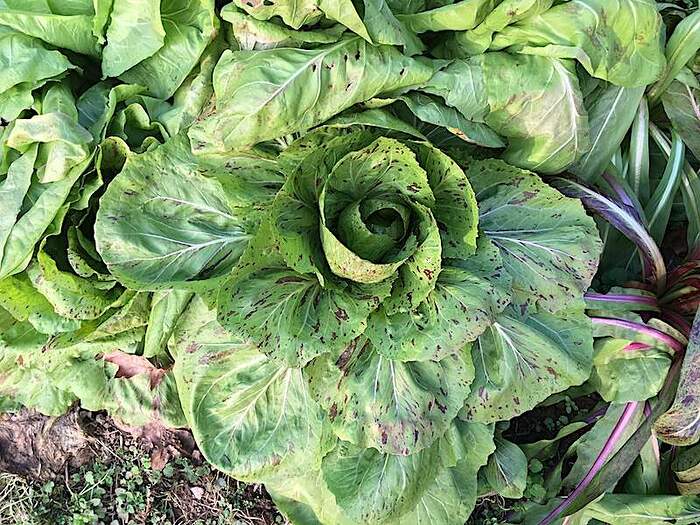 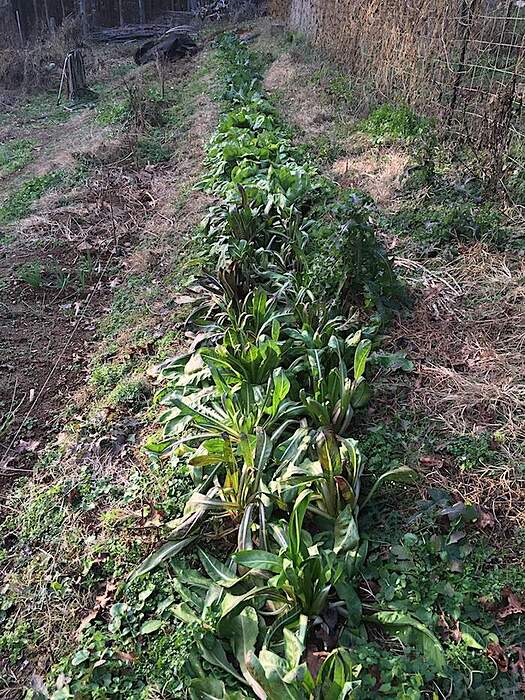 A shorter row of Rossa di Treviso is showing some beautiful color patterns. 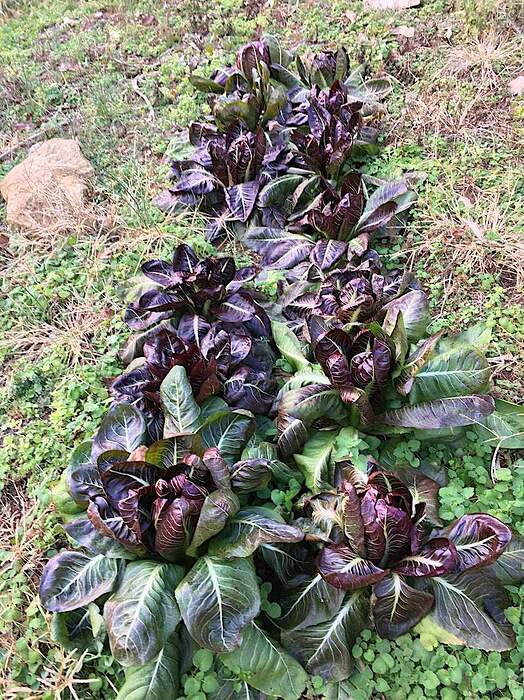 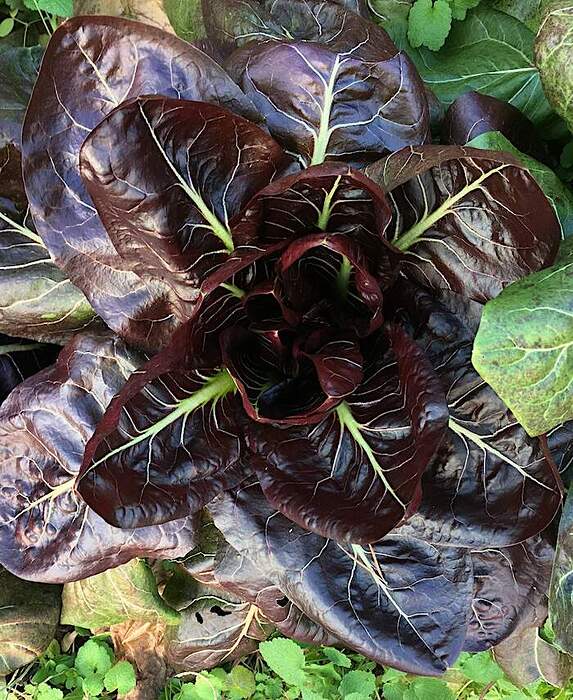 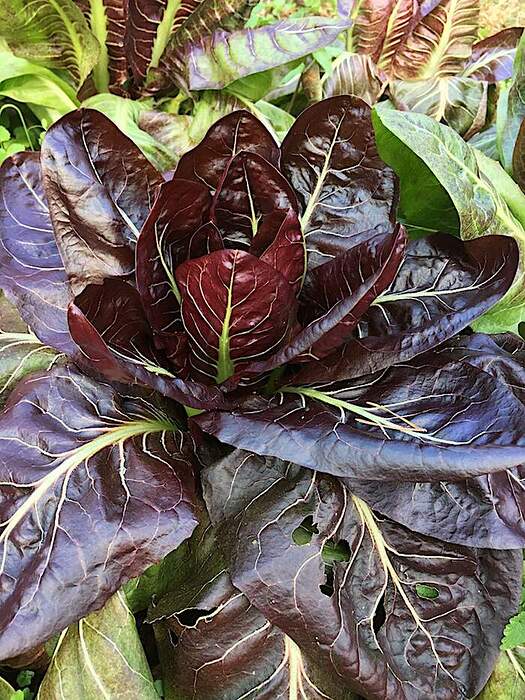 I may have to dig the roots and cut off the top growth, since the weather hasn’t killed it back, something I’ve never had to do before. The re-growing, under straw, has to be during cold weather, and at this rate, I’ll run out of that!

Most of the mustards are getting frost covering when the temperatures are in the 20s (-7 C). Since the metal hoops here are too big, I split some big bamboo poles and shoved the bamboo strips into the ground to keep the covering off the plants. 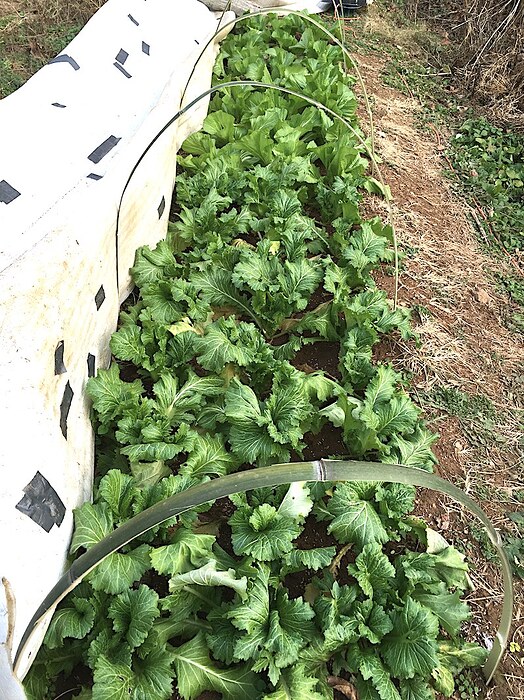 A few plants of each mustard type, Horned and Wrapped-heart, are planted elsewhere, to see what happens as it gets colder. So far, only minor damage at 25 degrees F (-4 C) on the non-covered plants.

Very nice! Is that as much work as it looks like?

Tangerines from the neighbors who helped put out the fire in my back yard this summer! 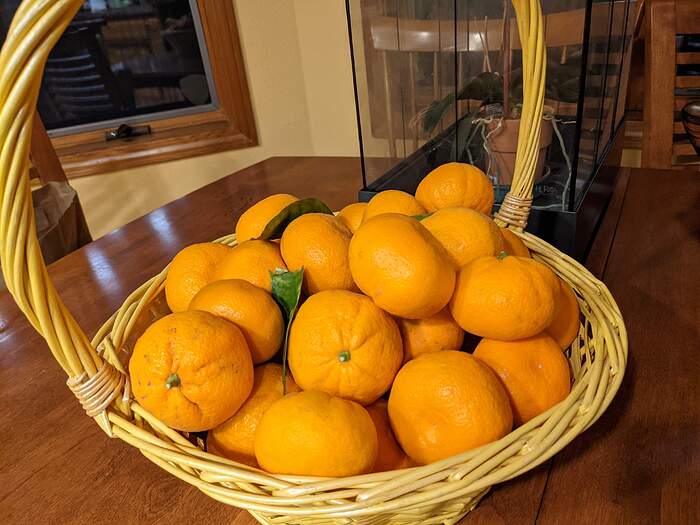 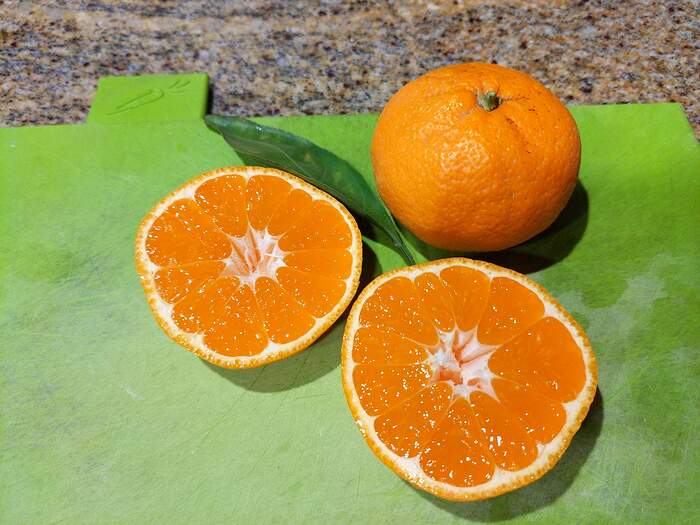 Mandarins and their hybrids

Check this out! Sort of like that preserved figs recipe from Edna Lewis. 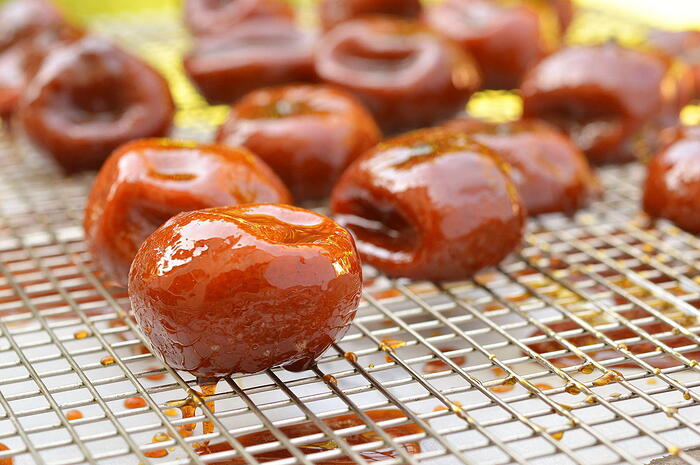 You might think that this recipe Candied Clementines Confit with Moroccan spices has nothing to do with duck but, in fact, it uses a similar methodology of preservation only in this case with sugar and corn syrup.

Shrinkrap, those tangerines looks juicy and wonderful! My best guess is the variety is “Satsuma”. There are not many tangerines, besides Satsuma, which don’t have few to many seeds and are harvested this early in the season. Satsumas also are very popular in parts of CA. Plus, it’s one of the few which can take some pretty cold weather, down to around 22 degrees F or less. Kumquats survive colder, but that’s good cold tolerance for a citrus. 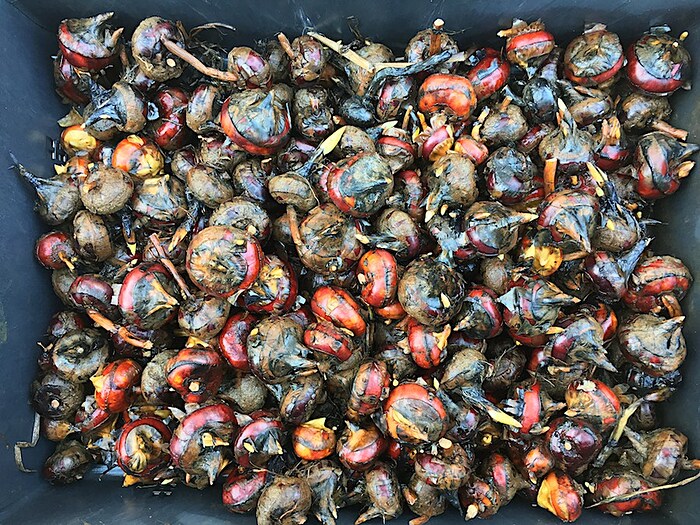 In 2019, freezes came about a month earlier, normal-ish timing. Some of last year’s water chestnuts were immature and white. This year, they all matured and were generally larger.

This is so timely for me! Thank you!

Yes, it’s a lot of work. But if you love doing it, it’s fun. I don’t watch TV, so there’s time to play outside. Not today though, awful ice-snow-rain mix falling.