From photos from the two restaurants, it appears Yi Yuan’s chef is managing two kitchens, or he is now working down the block at Yummy Szechuan: 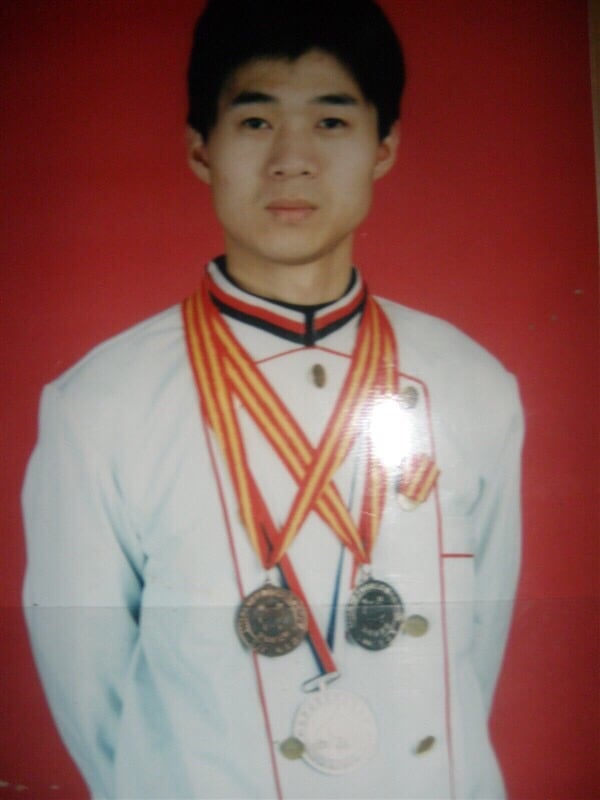 A few weeks ago, I had an excellent meal at Yi Yuan— a chef showed off his hand-pulled noodle talents and made a great zha jiang mian. Very fish fish filets with tofu, ong Choy with garlic, and wood ear mushrooms.

Well… I’m glad I had a successful game of chef “Guess Who?” 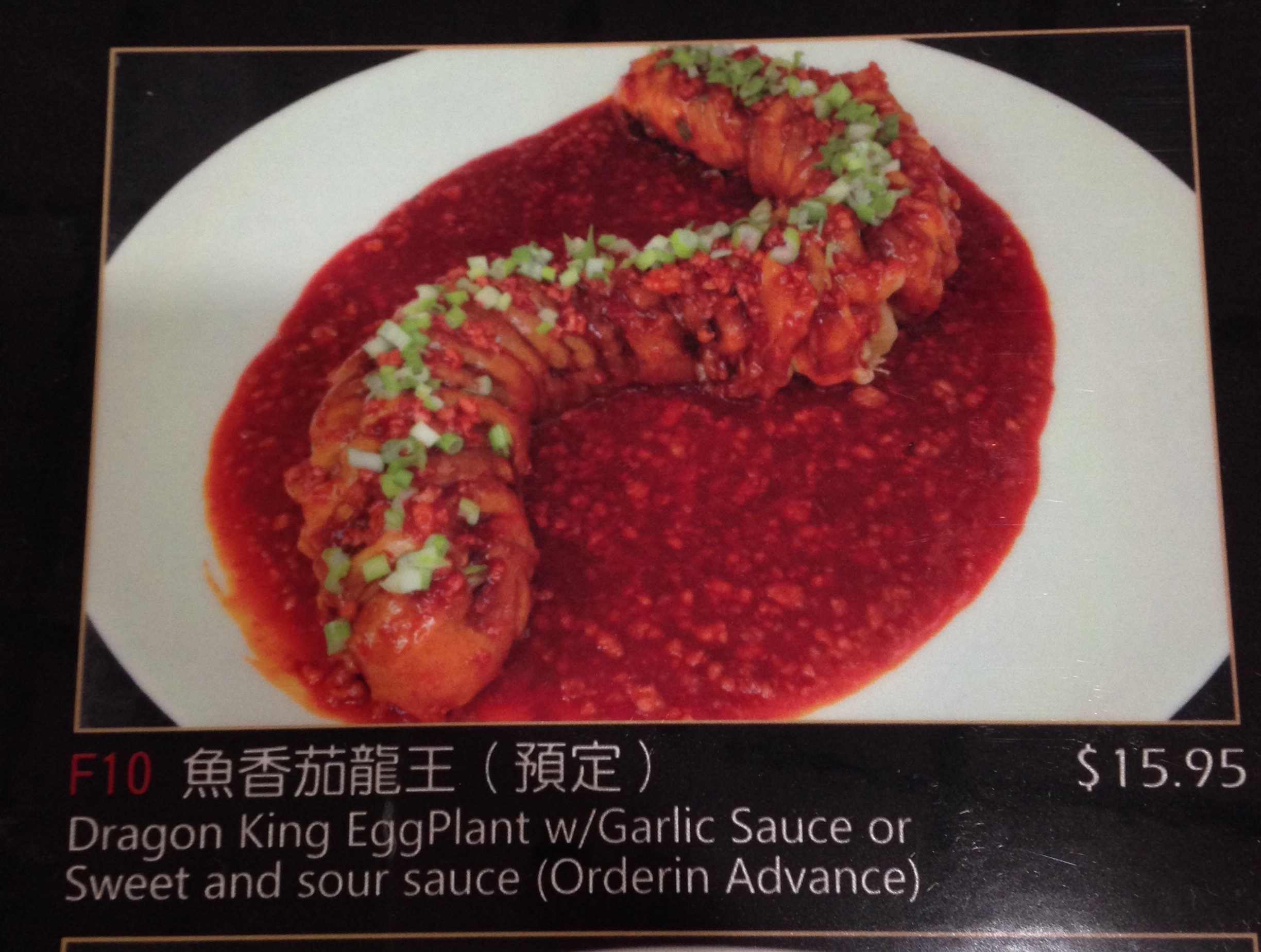 Yummy Szechuan is one block away from Yi Yuan, on the other side of The Kitchen. The food is just as good at Yi Yuan, but the interior is smaller and less ornate interior. I couldn’t find out why the two restaurants opened so closely to one another— there are different owners according to ca.abc.gov, and the server indicated that it was collaboration of some sort. He also said the chef Hu Wen Jun is currently cooking at Yummy Szechuan. While he is there, I’m hoping to return to order his specialty, “Dragon King Eggplant w/ Garlic Sauce,” a dish he has won awards for according to the menu. It seems to be a variant on the classic fish-fragrant (yuxiang) eggplant. It is only available with an advanced order, and I couldn’t find it on Yi Yuan’s menu when i was there last month. 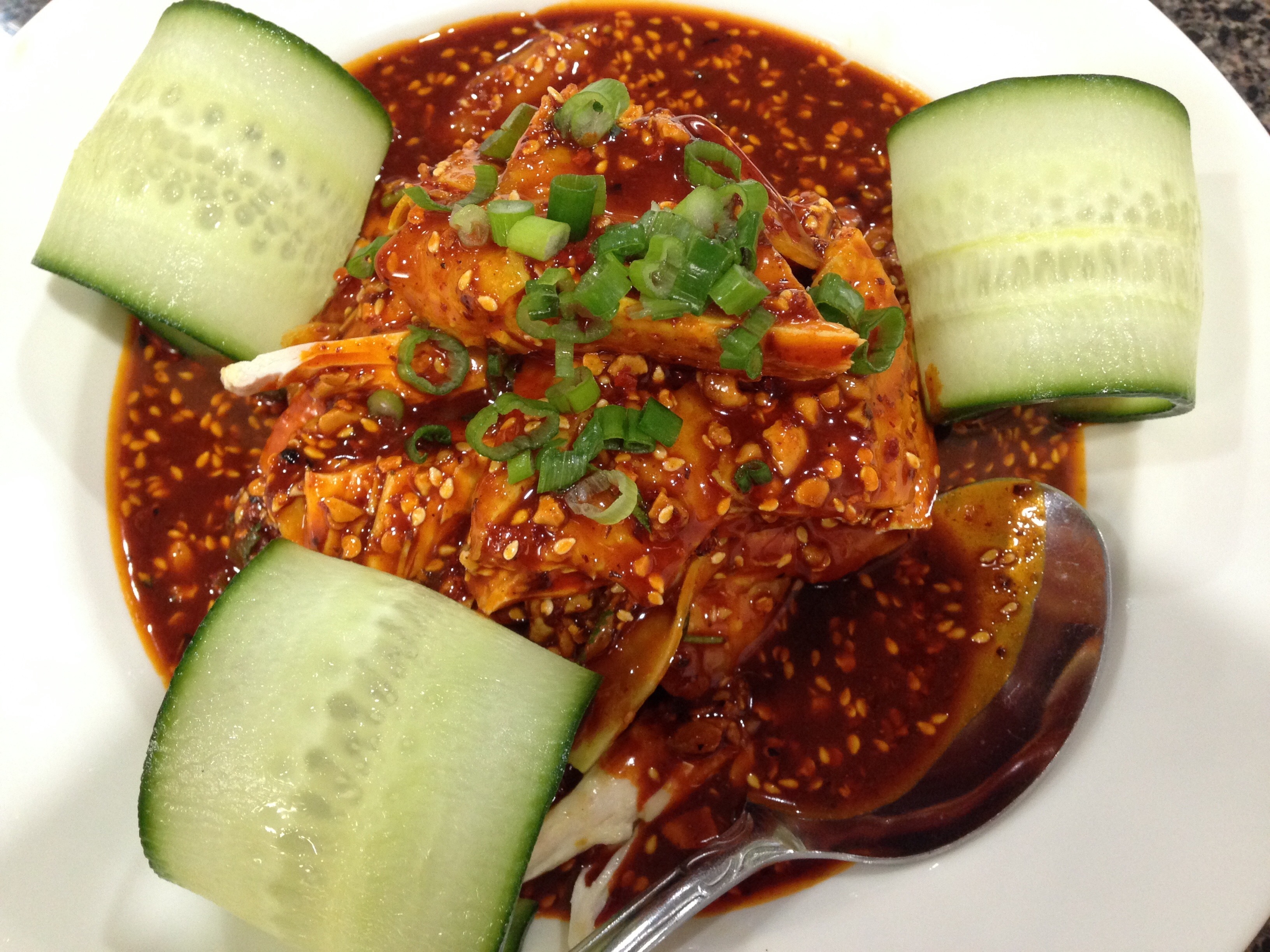 The “tender organic chicken in house sauce” is the Sichuan dish more commonly known as “Mouth watering chicken.” It’s aroma and look were stunning, and my hand battled between grabbing a cell phone for the picture and chopsticks to dig in. Chili oil and sesame seeds define the dish’s roasty character, and a scant amount of chopped peanuts boost those nutty elements. The chicken is lightly poached and flavorful enough to stand up to the sauce. The “organic chicken” is yellow feather chicken 黃毛雞 huangmao ji, which is also used in their chicken noodle “ramen” soup. It’s notable by its yellow skin, and, as Melanie Wong pointed out in a Chowhound thread I can’t find, the long thin radius bone in the wing section.

I asked for the beef noodle soup extra spicy, and that’s how it was delivered. The noodles are lamian — hand-pulled, thin, and squarish. Decent tug and they didn’t dissolve, even in leftovers. Good slices of meat with some cartilaginous bits. The heat was strong but not so potent I couldn’t taste the meaty broth (there was too much heat for me to tell whether there was MSG.

Speaking of spicy, I noticed on the menu a dish called, “Stir-fry double spicy dish with pancakes.” From the photo and name, it’s the same thing as the infamous extremely-hot pepper or ‘la si ni’ 辣死你 at Old Mandarin and Boiling Beijing’s and chili stir-fried chili at Beijing Restaurant.

For my greens, I got A vegetable, which I’ve recently become fond of after eating it doused in spices at skewer places recently. It’s romaine-like in flavor, and was great lightly cooked with chopped garlic.

Thanks for the write up. I’m looking at the menu online, what’s the name of the dish on the menu link below?

Which dish? You mean the “Mouth watering chicken?”

I’m not 100% certain — on the link you sent, Yi Yuan has a dish in the cold dish section “H9. House Special Chicken.” That should be it. The reason I say that is the 5th page of Yi Yuan’s online menu lists the dish as D7 House special chicken 山城口水鸡 (literally mountain city mouth water chicken— it’s helpful that the Chinese character for mouth, 口, looks like a mouth

I’m eating leftovers of Yummy Szechuan’s version right now. It’s great, but as you might anticipate, the fragrant sesame and green onions lost their mojo and there’s too much melding between the chicken and sauce.

Thanks, yes I meant the dish in the picture ‘Mouth Watering chicken’ - I wonder which is the correct website?

You found one http://www.yy1711.com/online.php - and I found yet another one via Google. http://www.yiyuanmillbrae.com/

There’s a price difference of a dollar for that same dish at the two Yi Yuan websites. So, the correct one is the cheaper one, obviously.

Speaking of menus, it’s odd that Yummy Szechuan doesn’t advertise anywhere on their menu that they used hand-pulled noodles. I wonder if they’re not always available.

The Chinese character for mouth looks like Donald Trump’s mouth, not yours or mine.

is just a bit more traditional.

The Bay Area netted 10 new Sichuan restaurants since Jan 2015, bringing it to about 58 places that specialize in Sichuan cuisine (~20% increase). And that’s not including faux-Sichuan and old restaurants adding new Sichuan items this year.

I returned last night for some takeout. The most popular dish on tables was Chongqing chicken.

There’s a dish listed as cumin lamb with corn cakes. The lamb is cut into small pieces that are very tender and there are a ton of Western onions. Lots of flavor, but no charring. The corn cakes or not at all what I was expecting – – The deep-fried cakes taste like tortillas and are about 3 inches in diameter, a half centimeter tall in the center, have lots of tiny air holes as in a breakfast pancake. The texture is the same as stiff, reheated sopes. But, the flavor combo of cumin lamb and corn is a winner and warrants further home experimentation with good quality tortillas.

Had “Dragon King Eggplant w/ Garlic Sauce.” Very tasty sauce with ground pork, ketchup(?) and garlic. The eggplant was coated and deep fried that offers a crunchy mouth feel. We all enjoyed this dish. (Not at all like the classic fish-fragrant eggplant that I know. We also did not pre-order but the restaurant wasn’t busy, so they offered it to us with ~15-minute wait.) Szechuan Smoked Duck was a disappointment. No flavor and too bony. Couple’s Delight was good, sesame seeds seem to give it an extra dimension of nuttiness. Bean sprouts were found on the bottom for additional crunchiness. The latter two dishes came out soon after ordering, so that 15~20 minute wait time went by quickly.

None of the tree dishes had Szechuan peppercorns. Next time, will go for the ma-la dimension.

I went to Yi Yuan in Millbrae for the first time last week. It wasn’t too crowded on a Friday night, and we had a leisurely meal. The biggest hit for me was the beef pancake roll. I wouldn’t expect a Sichuan place to have such a good version of this, but it turns out they do! Crispy outside, not greasy, simple and almost-healthy tasting inside, but still lots of flavor. I saw nearly every table ordering this, so apparently not a secret.

Also had beef noodle soup, spicy. Very good. Also some stir-fried hand pulled noodles which were decent. Whole fish was good but nothing super special, and salted egg yolk shrimp and corn was fun but a little heavy.

I’d go back due to convenience to airport, and also for those beef pancake rolls!