Why are there so few English or British restaurants in the US?

Myers of Keswick Delivery or Pickup in New York, NY

Myers of Keswick is available for online ordering and local delivery in New York, NY. Get fast delivery on the products you love. Give it a try today!

If you watch Jamie Oliver, he’s often going on about using chipolatas.

I lived in Britain for several years and spent many years after that traveling there on business and for pleasure. I have eaten a great many excellent meals there. Their excellence was nearly always based on the quality of the local fresh fish, meat, poultry or produce though and that’s really not exportable. Sure, it is easier to get a lousy meal in Britian than in France or Italy (although you can get one there too) but there is plenty of good British food to be had, not just in the fancy places either. It is just that it’s nearly always inextricable from its place.

I overlapped with your time. There was an explosion of restaurants then. I recall Marco Pierre White was all the rage. I remember going to Criterion off of Piccadilly when he ran it. Fabulous food along with a staggering bill.

Very interesting story about the origin of southern fried chicken. It’s surprise then that while you can get almost anything fried in a chippy including pizza and twinkies why there isn’t any chicken.

Also reinforces my point that I made everyone makes fried chicken. Except the British apparently now.

Great link!
My stepfather was born in Scotland and arrived in KC as a young lad.

Perhaps it’s about how certain types of foods or meals are identified? 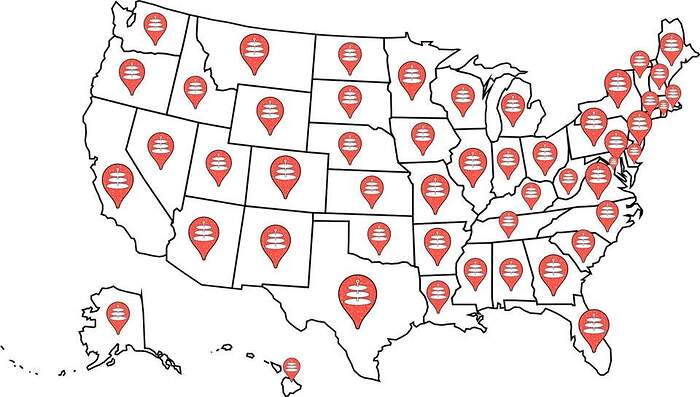 Destination Tea state directories allow you to browse by map and scroll through a sortable list of afternoon tea venues that offer any of the following:  cream tea, afternoon tea, high tea or tea ceremony.

I know there is a stereotype of British food being bad but I don’t think that’s the case. One of my favorite restaurants in the world is St John. I love all the various kinds of savory pies. That’s something you rarely see in the US. Most things that are called pies in the US are for dessert. Not the case in the UK. A good fish pie is divine. I’m not a fan of parsnips but I recall seeing them everywhere and you can find them in grocery stores in the states but where is the salsify? And I’ve always been curious as to why we call certain foods by different names. Zucchini and eggplant for example are courgette and aubergine, the French names. Then there are swedes. Why do Americans call them the far more mouthful name rutabagas which I also rarely see in a standard grocery store?

all the various kinds of savory pies

That reminds me of Jamaican patties. I have seen hand pies in other places that
may have originated with the Cornish as well.

I guess that doesn’t make them British.

Why do Americans call them the far more mouthful name rutabagas

Maybe because Swede has another, non-vegetable meaning.

the quality of the local fresh fish, meat, poultry or produce though and that’s really not exportable.

As they say in the vineyard trade, terroir.

Fish pie is one of my favorites, but I’ve mostly eaten it at home - I can think of only one instance of eating it out. Meat pies of all sizes and types too, I agree.

But this is like asking why the food of any other country, or its ingredients, is/are not available in a different country.

It’s usually immigrants from that country who find a way to bring the things they miss over to the “new” country - it’s not a “pull” from the people of the new country.

I’m thinking of various asian and hispanic groups with non-native (to the US) ingredients and produce, that have become increasingly available over time.

So perhaps the better question is why British food and ingredients have not been brought over in a commercial way by British immigrants?

There’s a short answer to the question in the thread title. And that’s because folk thinking of opening restaurants don’t think there’s profit in it. Yes, it really is that simple an answer.

You could easily ask the reverse question. Why are there so few American restaurants in the UK? Yes, we have the major fast food chains. And we have a handful of places trying to mimic American BBQ. And another handful trying to mimic Tex-Mex but that’s about it. But is that American food? Not in my experience of visiting the country fairly regularly since 1980.

Surely it’s a fact that ethnically diverse restaurants follow patterns of immigration. With new groups of immigrants tending to live in fairly confined areas and restaurants with their “new” cuisine starting up in those areas catering initially to the immigrant population. For example, New York had its “Little Italy” and my nearby city, Manchester, also had a “Little Italy” (and a “Little Ireland” as well). Leaving aside the early colonisers, British immigration to America in recent decades has not followed the same pattern as other communities, so there is no particularly large cultural grouping of Britons trying to fit in to American society (except perhaps where a major employer in a small town might have employed significant numbers)

But, let’s say I was going to open a British restaurant somewhere in the US. What am I going to put on the menu? Well, that may have a simple answer. I’m going to put on the menu the dishes Americans quickly associate with British food - fish & chips, fish pie, sausages, sticky toffee pudding and the like. Even if these dishes don’t really represent modern British restaurant food. Yes they are foods we might eat at home and, from time to time, you might find them on the menu of a bottom end of the market pub or similar. But it would be about as close to representing British cuisine as Burger King represents American cuisine. It would be a caricature. For a more accurate portrayal, folk may have read the restaurant reviews that get posted by me and other residents here to the UK/Ireland forum. That may have led them to look at the full menu of places we’re mentioning - such as this one which is a favourite neighbourhood place a few minutes drive from home. How do you think that menu would play for a British restaurant “somewhere in America”? https://no4dineandwine.com/wp-content/uploads/2021/09/Mains-Sept-2021.pdf

How do you think that menu would play for a British restaurant “somewhere in America”?

I think it would do fine, but no one would call it a British restaurant. They’d call it a restaurant. Dishes made from those ingredients are not at all uncommon in the U.S. I had to look up samphire - it seems to be what we call sea beans.

I’d agree - this could easily be a menu from an “American” restaurant with focus on quality ingredients and attention to preparation.

I think @GretchenS made this point above as well.

Here is a menu from a lovely place that could be described as a British gastropub in NYC:

Same (British) chef had a couple of other places, but they’ve been shut because of the pandemic. The Shakespeare, for example, had a more extensive menu that had some less stereotypical dishes - menu only visible on yelp at the moment.

Gordon Ramsay had The London a few years ago - modern menus, again. But not that different from modern American menus.

but no one would call it a British restaurant

Exactly my point. There’s British food. And then there’s the British food that foreigners think we eat. I cannot wait to type up my reviews of the last week’s eating along the coast in southwest England. So much good seafood. And, oh yes, good fish & chips

I left out spotted dick, every 5th grader’s favorite dessert

Perhaps unsurprisingly, of those you mention Oliver is closest to modern tastes.

Kerr, although British born, lived and worked away from the UK for most of his adult life and I would reckon will be best remembered for his Canadian period as the Galloping Gourmet. Ramsay is one of our best exports to the USA, please keep hold of him.

You make an interesting point mentioning Spotted Dick. It, like most of our steamed puddings and well known desserts, came into fashion in the 19th century. They are invariably rich and heavy and have fallen out of fashion - I think they are due a revival. I’ll make Sussex Pond Pudding the front runner if ever there is. Mentioned upthread, sticky toffee pudding is probably the best known of our desserts in America. It’s a recent creation dating to the 1960s (?) and created by the then owner of the Sharrow Bay Hotel in my region of northwest England (and I have eaten it at the hotel). A well made version makes me very proud of our regional food. It’s probably really the only example of that style of dessert which you’ll see on restaurant menus and it really is ubiquitous. Had one in a pub last night. Not my first choice but, like an increasing number of items in the UK, that was unavailable (a combination of Brexit and Covid is causing supply chain problems) . First choice was a Bramley apple and blackcurrant crumble which, even in a national chain pub, would have bound to have been better than the insipid sticky toffee thing I was served

Great link!
My stepfather was born in Scotland and arrived in KC as a young lad.

Yes, I enjoyed it too. My Scottish great grandfather immigrated to Kentucky.

I think what we’re working toward is not needing a modifier for what we think of as “regular” food, and there’s a lot of overlap between the “regular” food of English and American people. Of course, there are both English and American foods that are so stereotypically English or American as to lend themselves to caricature. Thus, we could have a “themed” English (in the U.S.) or American (in England) restaurant, but one that might actually best represent the way people in those countries eat is just…a restaurant.