Monday night, and we had a skirt steak, combined with a fresh corn salad with freshly shelled peas and fresh herbs, served over a bed of arugula and pecorino . . . 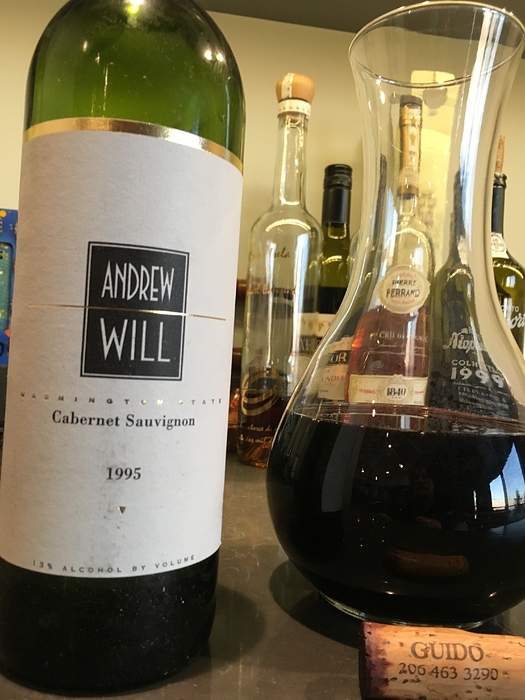 1995 Andrew Will Cabernet Sauvignon (Washington State, USA): Deep garnet in color, with slight bricking at the rim; clear and clean after decanting (10-15 minutes before service); ripe fruit and spice, with the classic cocoa/cola notes accenting the nose; on the palate, the wine was medium-bodied, smooth and supple, with lush fruit, spice, vanilla, moderate oak, all carrying through the very long finish. Simply put: this was excellent!

With a simple charcuterie Wednesday night . . . 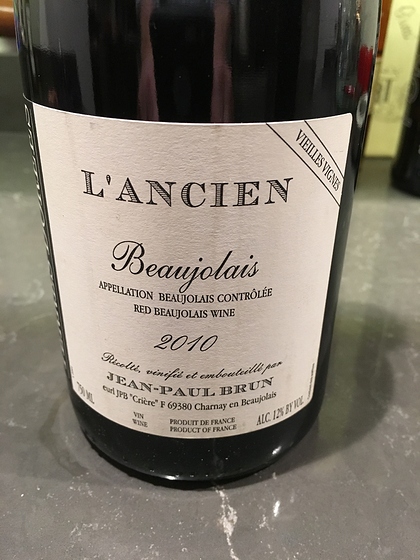 2010 Beaujolais, “L’Ancien,” Vieilles Vignes, Jean-Paul Brun (Beaujolais, France): This wine should be the “poster child” for those who don’t think a Beaujolais will age. This is a “straight” Beaujolais, the lowest appellation from the region, and yet this wine, produced from old Gamay noir au jus blanc vines, is simply stunning – supple, smooth, complex, and delicious!

Served last night with teres major cooked on the grill, with roasted vegetables and a salad . . . 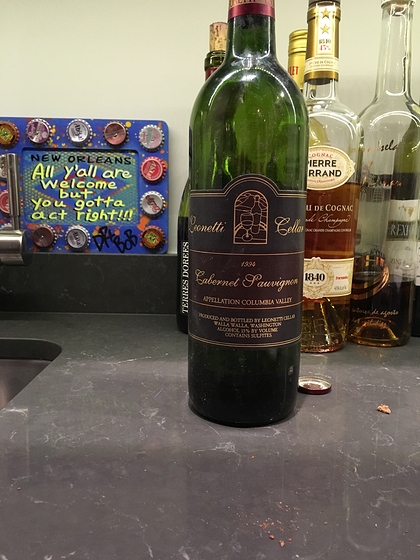 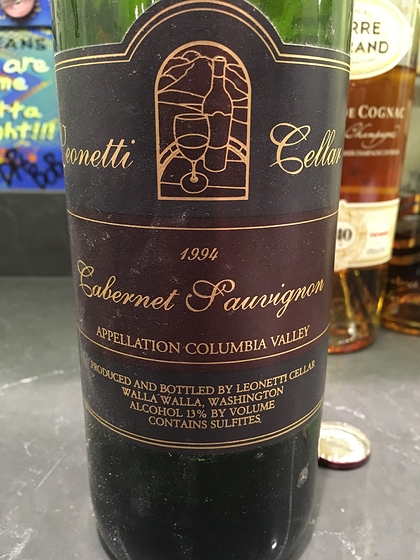 All of the above wines real nice, Jason .

Started off with a variety of cheeses, olives, duck pâté, figs, and oven-roasted baguette, and a bottle of . . . 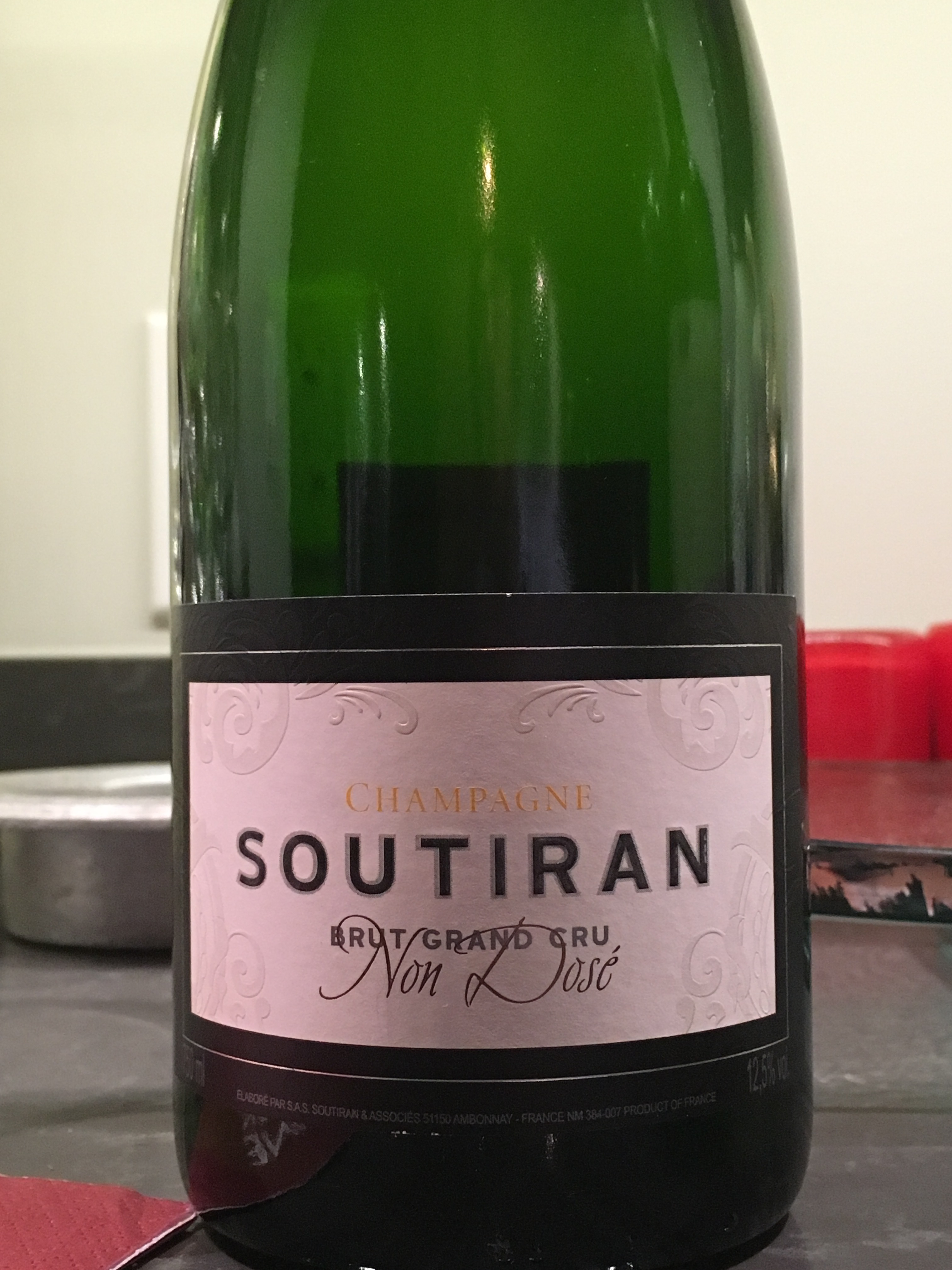 Next, following a soup course of Salmorenjo topped with a drizzle of extra virgin olive oil and some Jamón Ibérico de Bellota, we moved onto the main course: grilled rib-eyes with romano beans and a corn salad on a bed of arugula, and . . . 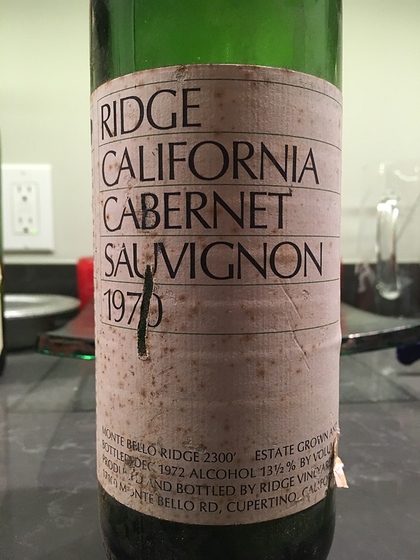 1970 Ridge Cabernet Sauvignon, Monte Bello Estate ([Santa Cruz Mtns.] California): This would, today, be simply labeled as “Ridge Monte Bello,” but back in 1970, the wine wasn’t anywhere near as famous as it is today. Label states 13½% abv, but possibly higher.¹ The label also states that the wine would age for a couple of decades. However, at 46 years of age, this wine is remarkable – with all the classic hallmarks that has made Ridge Monte Bello one of the “grand crus” of California Cabernet Sauvignon – with loads of cassis, currants and red fruits combined with a light herbaceous tone and that classic earthiness and an underlayer of oak, with generous flavors and complexity on the palate; surprisingly vigorous and even somewhat youthful (the impression is of a wine 5-10 years of age, not 45-50!); a slight acid sharpness in the finish is the wine’s only fault, but clearly not so much so that it makes this wine anything less than a classic! 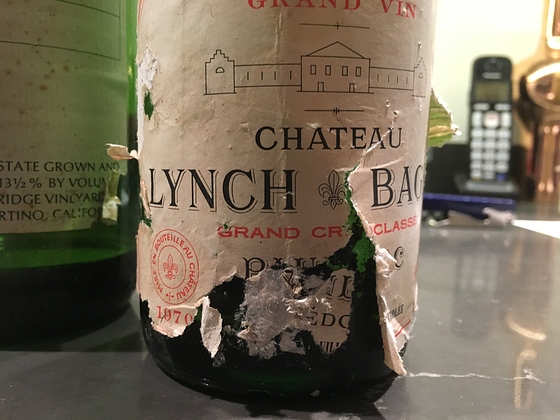 1970 Château Lynch Bages, 5me Cru, Pauillac (Bordeaux, France): My friend’s cellar is somewhat famous for its higher-than-average humidity, and it’s not uncommon for the label(s) on some of his wines to fall off, get moldy, or be eaten by banana slugs. This bottle was no exception, and – as always – the wine’s identity and vintage were confirmed by both capsule and cork. In contrast to the Ridge, while there is classic Cabernet “power” here, there is more refinement, more elegance, and more “class” here – an altogether seamless wine, which I cannot imagine being any better. Outstanding!

¹ Paul Draper once told me that, when their labels have the alcohol level stated by a decimal point, it is exact, whereas when it is indicated by a fraction, it was understated in hopes of avoiding the higher taxes (which would kick in at 14.01% abv).

And finally, with a dessert course consisting of a pear-frangipane tart, I opened a 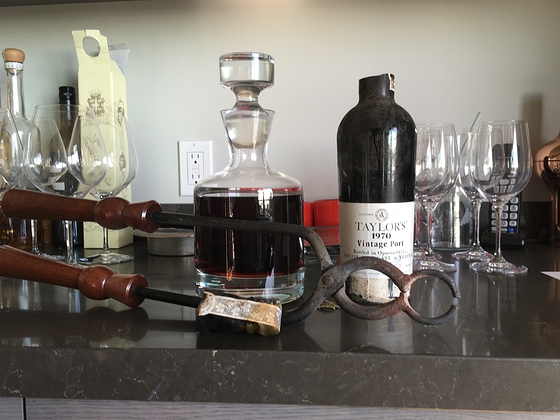 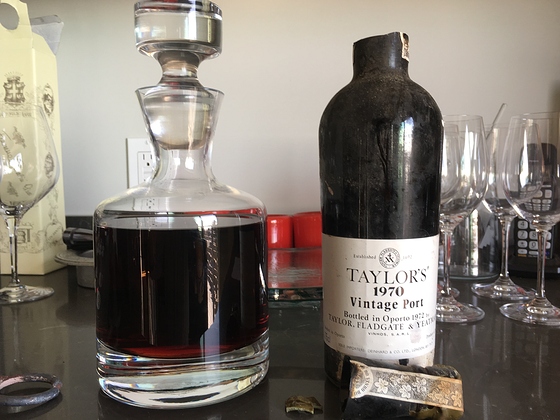 1970 Taylor’s Vintage Porto (Douro, Portugal): Sold under the brand name “Taylor, Fladgate” for the US marketplace (this bottle came from the UK), this bottle was stood up for a week to allow the sediment to settle; I removed the top using port tongs and decanted the wine approximately 3 hours or so prior to service. The heady aromas of ripe plums, a touch or tar, earth, slate, a hints of spirit; on the palate, the wine is full bodied and driven with all the power Taylor’s is known for; broad, full-flavored and rich on the palate, with moderate sweetness and spice, no trace of heat and a very long, lingering, flavorful finish . . . Superb, magnificent, wonderful!

No one drinks wine anymore? 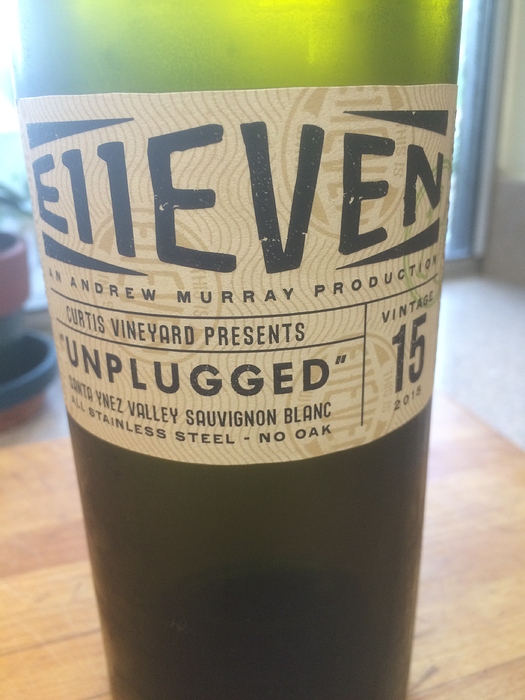 Today, drinking straight from the wine press. As I type I’m taking a break from pressing grenache. 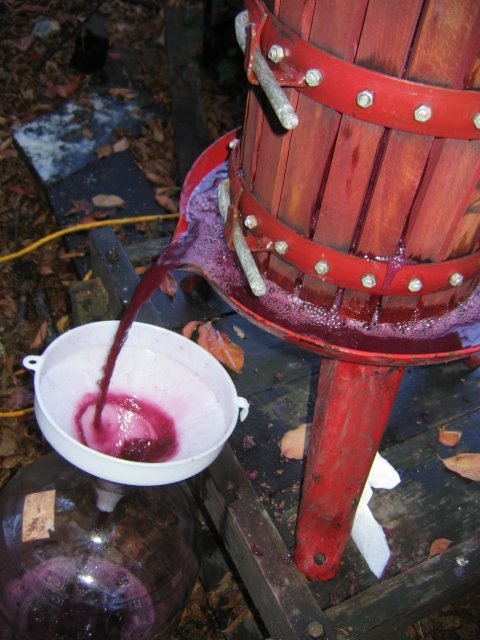 (reposted because the image was sideways)

Dinner was popcorn and Ridge. This blend was big, red fruits, and a lot of pepper. 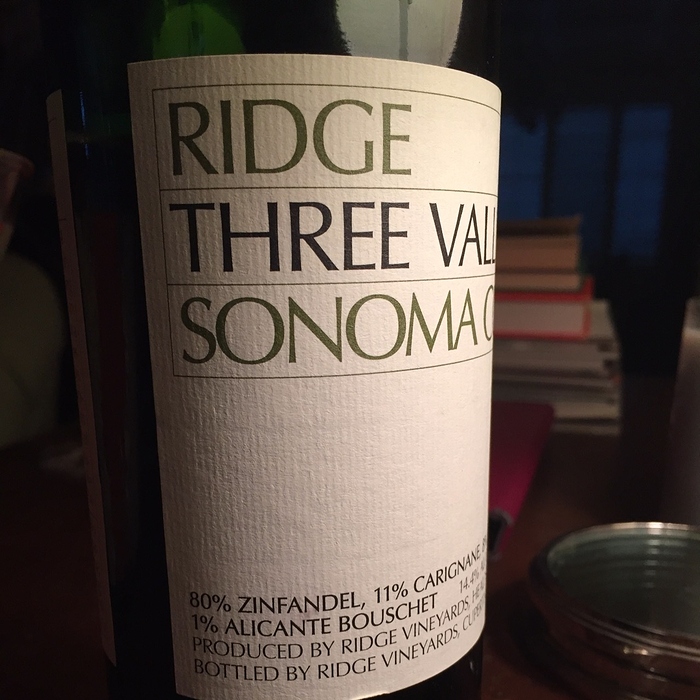 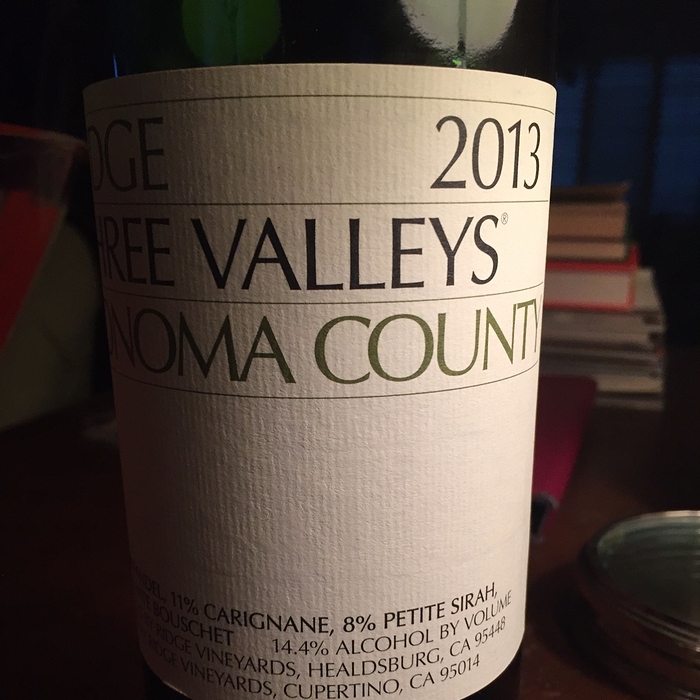 No one drinks wine anymore?

My wines aren’t fancy enough for this thread.

You know, that isn’t the case . . . a) I have very few wines in my cellar that I think are “fancy”; b) just as there is NO ownership of this thread, neither are there any RESTRICTIONS as to the type/kind of wine(s) that can – and should! – be posted here; and c) IN NO WAY would I ever wish to limit, inhibit, discourage, or restrict in any way the sort of wines people post about, ask about, talk about, or drink . . . whether it’s here on HO, on any other website, or in real life.

I say all wines are welcome here. We enjoy hunting down great wines priced between $10-30.

But, tonight we opened this 1998 Stag’s Leap. I’m generally not a lover of Sirah, but with some age, this was super smooth, balanced, a bit spicy (but none of that nasty green pepper flavor I usually get), and earthy. We enjoyed a glass with some thrilled cream Brie and will save the rest for dinner…ribeyes on the grill.

The state of the cork was a bit alarming, but all was good once we strained and decanted. 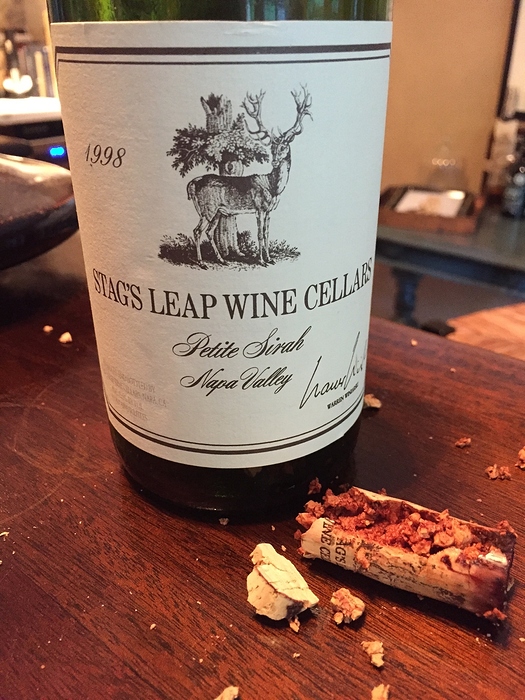 Interesting! I have a 1988 in my cellar (I joined a wine club years ago, and this was one of their bottles). Thanks for the reminder–I’ll probably open it when the weather turns cooler. 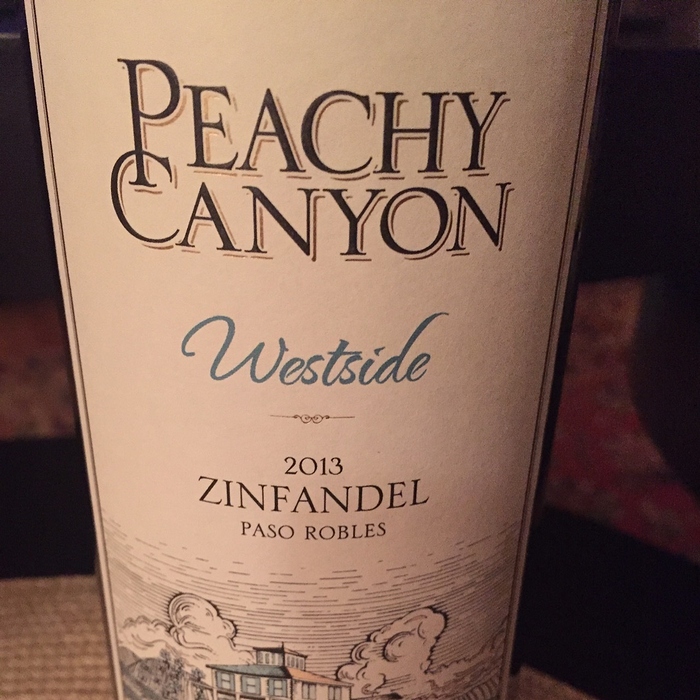 Anyone do the Club W (now Winc) thing? I have been partially liking it, but I notice that I can only get from them which has me leaning towards just buying from a store like Wine N More (Binny’s in Chicago).

I cannot tell this board how saddened I am – STILL – by @boogiebaby’s comment that [quote=“boogiebaby, post:331, topic:1197”]
My wines aren’t fancy enough for this thread.
[/quote]
I hope no one else feels that way. Wine is a beverage, something to go compliment food; and isn’t that what this site is all about?

I say all wines are welcome here. We enjoy hunting down great wines priced between $10-30.

Agreed. Overwhelmingly the wines which I purchase far into the same category . . . well, maybe $15-35 at retail, but close enough, I’d say. (This doesn’t include Champagnes, for which I will admittedly pay more, and a handful of special wines.)

The difference is that I have a modest wine cellar of some 60-75 cases. EVERY old(er) bottle that I have posted TN’s (tasting notes) on recently have been from my cellar. Indeed, every wine, period – save the Pahlmeyer and Stag’s Leap “Fay” – came from my cellar. Take, for example, the wines I wrote about on September 11th:

So again, nothing “fancy” about my wines – other than I tend to cellar them for a bit prior to drinking them . . .

I hope this thread – indeed ALL wine discussion – will continue on this site, but as they say, “time will tell.”

A new Pinot we found today at a newly opened Total Wine. Very nice. Spicy and a bit bigger but a nice drinker. Went well with veggie risotto. 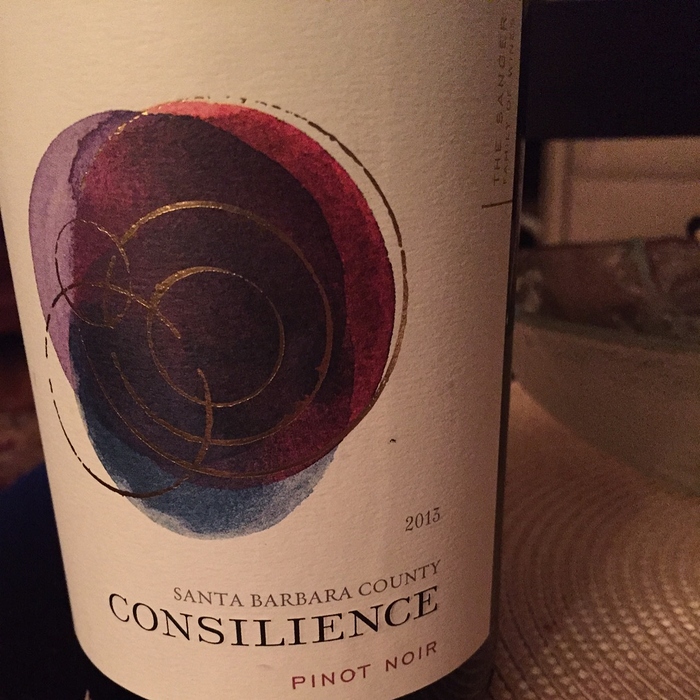 We took the Ridge to a paella a dinner last week. 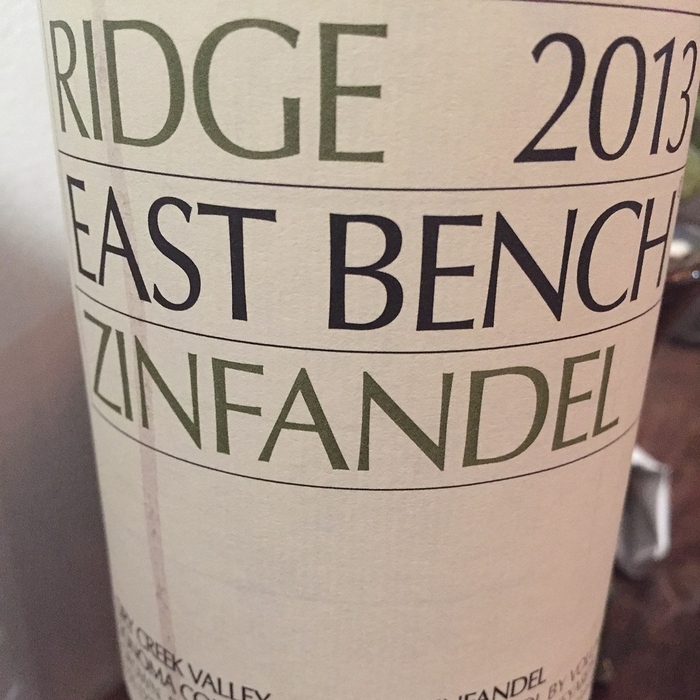