We had a long awaited wedding which was pandemic postponed several times. Originally slated for The Plaza, at some time during the pandemic they closed so the new venue was The Rainbow Room @ Rockefeller Center.

Added bonus for me personally was the rooms were at The Palace, a long time favorite hotel of ours from our many weekends in the City. First and foremost I was quite apprehensive of spending a night in the City and especially walking around in our black tie apparel. I’m very pleased to say that area of the city seemed to be business as usual, the city is back!!!

It’s been awhile since we’ve stayed at The Palace (discovered The Kimberly just a few blocks up 50th and really like it better) and I was eagerly looking forward to it. While it’s as beautiful as ever there was NO food or beverage service on the property!?!?! Look, I thought we were supposed to be returning to “normal”? No glasses in the room only plastic cups individually wrapped in plastic. There was also no mini bar options so no cold water or beverages, I called for a bucket of ice and glasses, I received a plastic bucket with a zip lock bag on ice inside, no glasses.

Sad to say I was quite disappointed with our stay. Beds and pillows are still good and the property is still beautiful but I think they can be doing “better” at this point.

Had lunch at Del Frisco’s Cafe at Rockefeller Center yesterday and everything was very good. They had a large number of tables full for a Saturday afternoon which was good to see. Made a stop at Magnolia bakery for some sweet treats and they were delicious!

The Rainbow Room, where to start??? The views from 65 stories up is unbelievable. You get a whole new perspective for lightening when you are up that high and the stormy weather made it a true unique and memorable experience. The venue itself is well………dated. The air conditioning on many of the rooms were overwhelmed it seemed. It felt like a time capsule from 1986 I almost expected Johnny Carson and Dina Shore to come walking in. There were missing ceiling tiles - exposed duct work, the carpets were old and worn it has not been kept very well over the years.

The food was meh at best especially given the location. I would have hoped they would have true chef quality food instead of normal mass produced banquet food which was exactly what you received. There was filet mignon which was good, but not great. Literally a 6 oz filet, spoon of mashed, some mushroom brown gravy and a few mixed vegetables. Ho-hum, had this been anywhere else it would fine or expected but here?? I held my hopes too higher!!

On the way out of the city we required some hang over assistance so a quick stop at Sticky Fingers Chicken was in order and very satisfying! Cool smaller chicken chain!

Oh and check out the wiener I passed on the way home!!

Welcome back NYC, I’ve missed you!!! (Looking forward to my tickets to Van Gogh exhibit next month!!! FYI Van Gogh single espresso vodka, the clear one. Absolutely delicious after dinner drink on the rocks. Trust me you’ll like it!!) 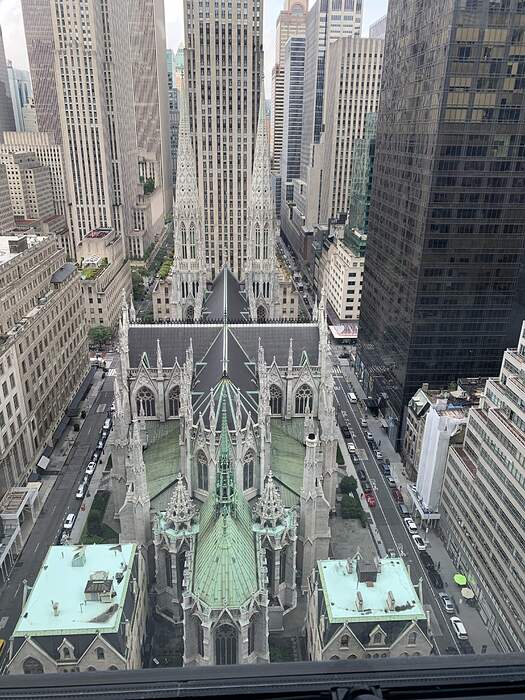 My nephew taking in the view 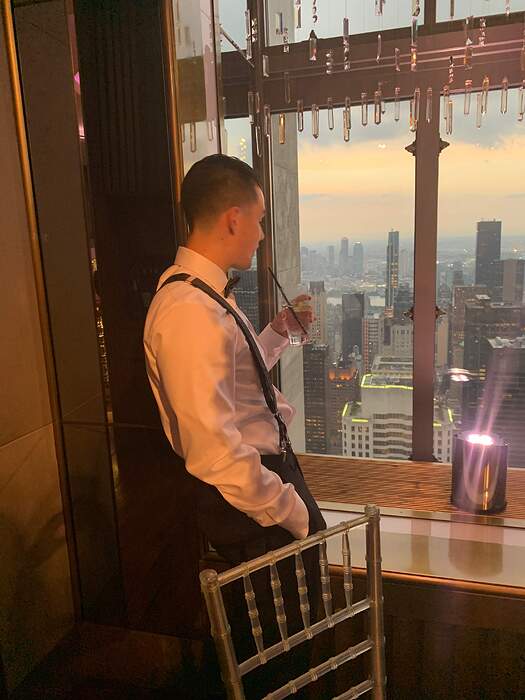 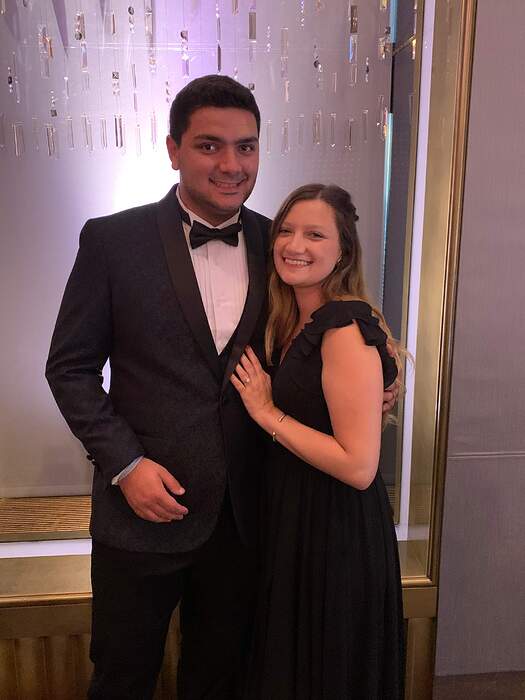 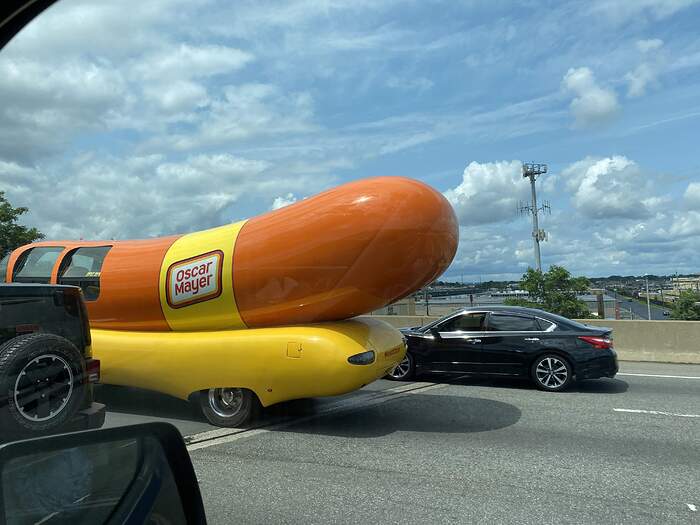 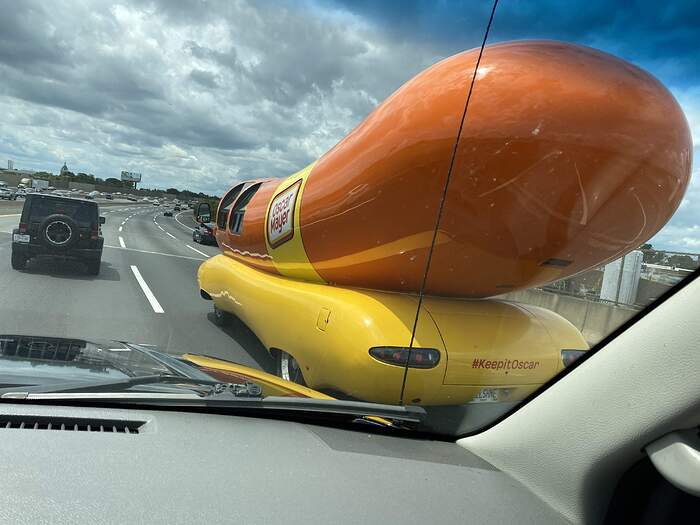 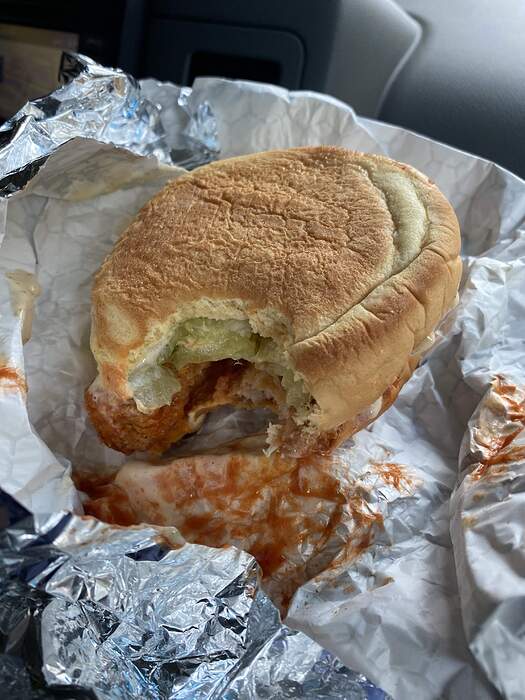 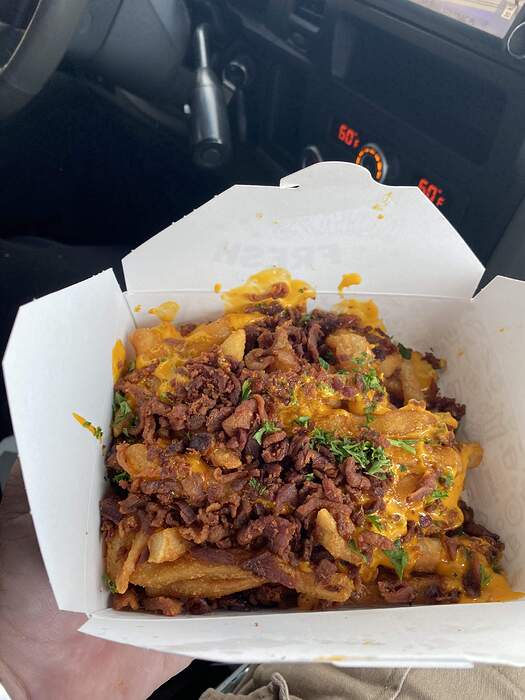 Seriously though, glad you enjoyed! Love the pics.

Gorgeous views! Thanks for sharing.

Not terribly surprised by your hotel experience nor the food at RR.

Foreign tourists are not back yet, and even though NYC is over 70% vaxed, other places that domestic tourists would come from aren’t necessarily, and with the Delta variant in play, I’m somewhat comforted by get the disposables and other measures still in place at the hotel.

Too bad about the food. It’s too bad when a venue like that doesn’t allow outside vendors - captive catering is almost always not up to the rest of the experience. Many of my friends who planned city weddings had to forego several preferred venues simply to have better food options.

Still, it all looks lovely - what a wonderful thing to go to a wedding in person again!

I second Saregama on this - bummer, but not surprised. Things are only semi-normal at this point. And the Rainbow Room has been dated and mediocre forever! But it sounds like the view and the overall joy at being back in the city made it all worthwhile. Fingers crossed for more impressive food next time!

My only Rainbow Room meal was a birthday brunch years ago. The room was beautiful, the view was spectacular, and since it was a (huge) buffet, I managed to find enough decent stuff to justify the lofty price tag. Trying to eat my weight in oysters and shrimp got me part way there. I’ve also worked 10 or 12 events there (even more years ago) and yeah, it’s event food. Not restaurant food.

The Rainbow Room is still around?? I think the last time I was there was 1986! I’m dated too.

JR! We missed each other. I’m in that area during the work week. In a building just to the left of the window that your nephew was looking out. Midtown is much more lively than it was in July 2020. Was pretty grim going into the office then. Now it almost feels almost normal but the dining options in Midtown aren’t great. One of my favorite new discoveries has been the Jam Rock Jerk food cart. Some of the best jerk I’ve come across in the city. Pretty funny to be walking up sixth and seeing smoke billowing out from a cart. Had to go to see if there was fire with the smoke and check it out. Glad I did. So much better than that sh*t they serve now at the Halal Guys cart.

3 posts were merged into an existing topic: August trip to New York City