Up in Smoke BBQ [Rockland, ME] 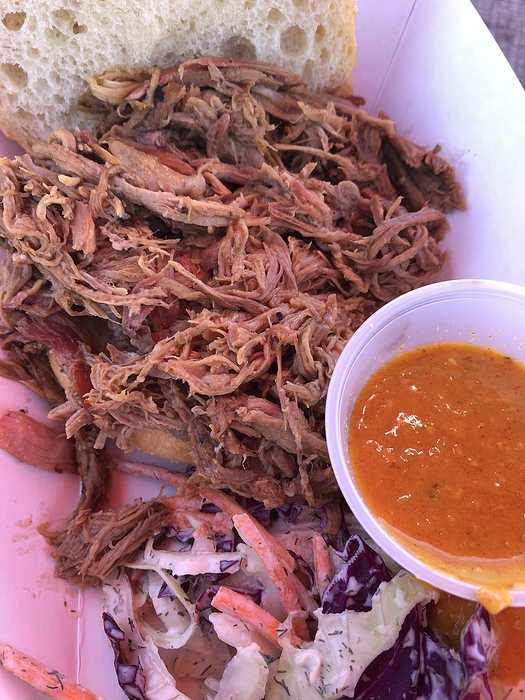 Half sour (house made) 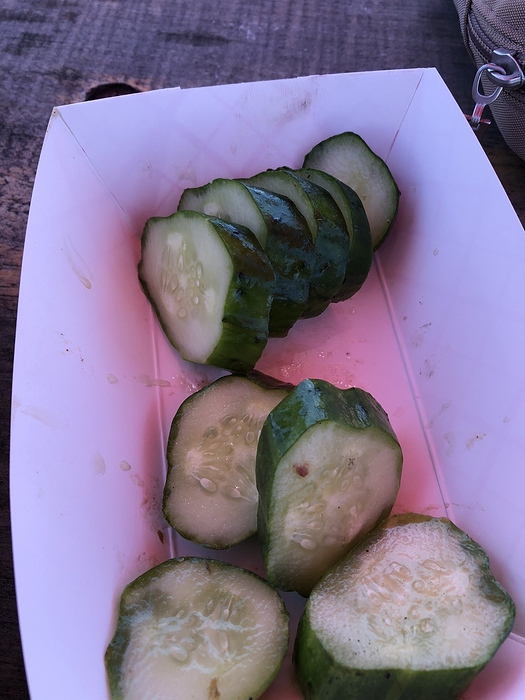 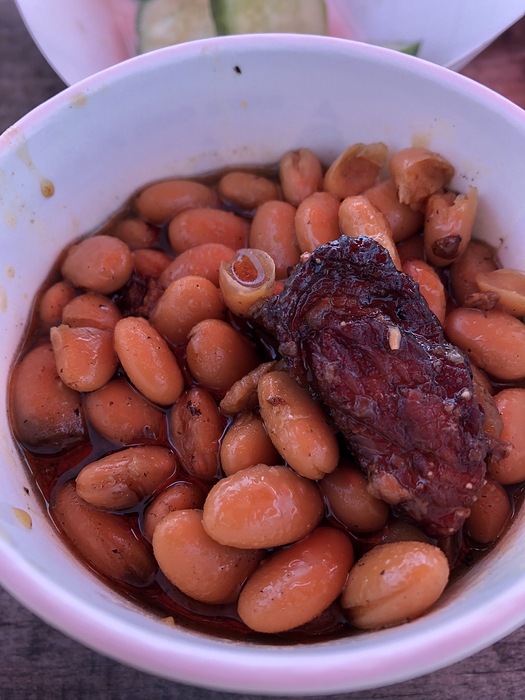 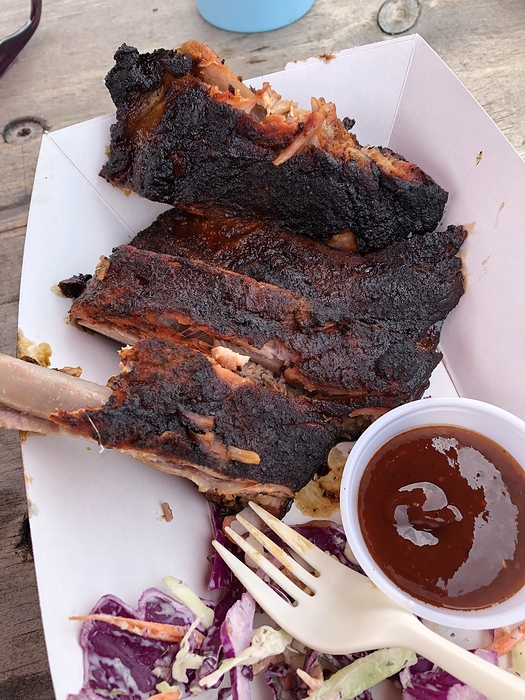 I have now had everything on the menu, having tried the jerk chicken today, which I hadn’t really been excited about because chicken can be so dry but it was absolutely fantastic, half a chicken chopped on the bone, incredibly tender and not in the least dry with fabulous jerked flavor and a sneaky heat that I loved. Not very photogenic though. This place hits it out of the park every single time. It really is remarkable. I have learned to share or bring a box for leftovers, the portions are huge. I am going to be very sad when I go home and have to wait till next summer to eat this food again.

My 2019 wrap-up report as sadly my time in Maine is over. Every single thing Will (pit master) makes is amazing. I had a chance to chat with him a bit. While his brisket is extraordinary he sort of waves that off saying you can’t open a bbq place until you have nailed brisket. He is proudest of his pastrami and his jerk chicken, saying those are much more technically difficult and took him far longer to learn. The chicken in particular (in order to deliver the tender perfection that he does) took a lot of trial and error over where he placed it within his huge smoker. He truly is a man with an obsession in the best possible way.

In addition to the consistently excellent food, I also enjoyed the many interesting folks I chatted with around the big communal tables over the summer, both locals and visitors. Many food tips were exchanged as well as travel tales told. One gentleman who lives locally told me that Will takes orders for Christmas brisket which is certainly something to keep in mind. One last point: if it is pouring rain at 4:00 am when he gets his smoker going and likely to keep raining, Will will be closed for the day. There wasn’t much heavy rain this summer so that only happened a few times.

ETA: get there early (best before noon) to have the best chance of getting what you want, or place an order the night before on the website. Pastrami Saturday only. I have gotten there at 12:30 or 12:45 to find “only” brisket left, and once he had already sold out of everything.

Thank you so much for the intel and pointer to Up in Smoke! We were already planning on Friday night in Rockland so it was an obvious target for Saturday lunch, because pastrami: 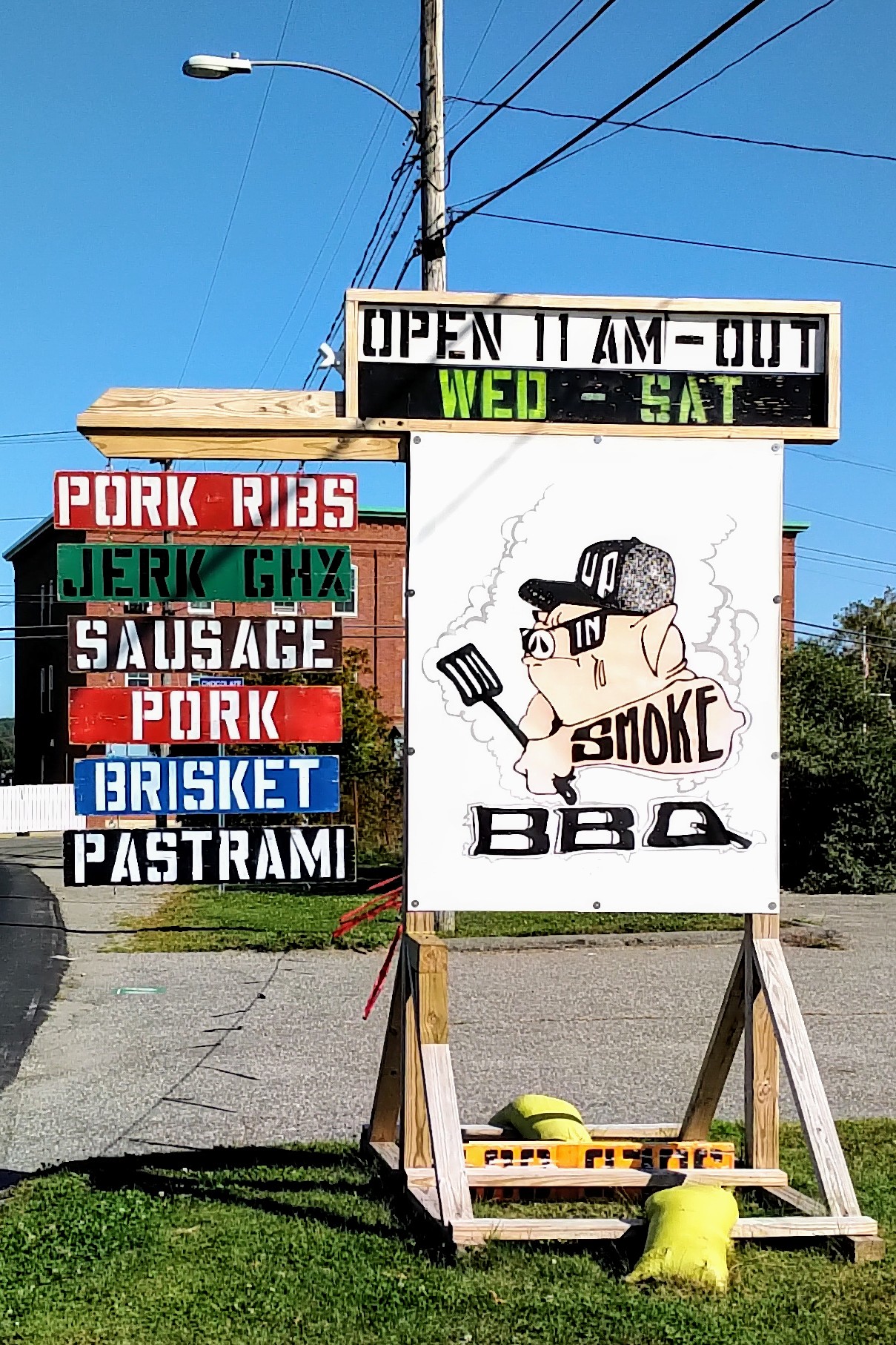 Forewarned, the three of us arrived a little before opening and enjoyed watching the prep. The smoker set-up is quite impressive and the decorative touches amused the welder in our group. 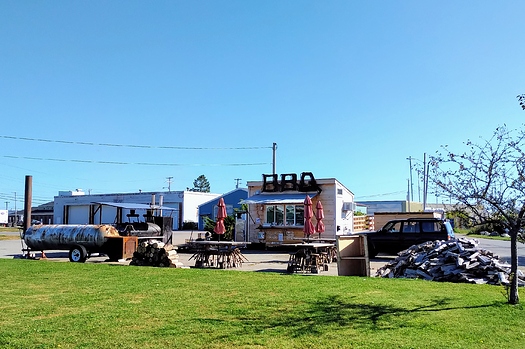 IMG_20190921_0944208~22978×1985 1.33 MB
I’m really glad we got there early; we were #2 to order and there was already a line behind us. We got sliced-meat portions of the pastrami and the brisket (one of us an aficianado) with cole slaw. Usually we’d try pulled pork or ribs when checking out a new BBQ place, but based on your description went with the jerk chicken for item number three. Very happy we did, especially when I found a bit of smoked chicken liver in the mix. (I did get an order of the pulled pork to take home, for science. Tasty, tasty science.)

For sauces we crossed state lines and had Carolina vinegar with the brisket (our brisket-lover is also a vinegar fan). Per tradition, the pastrami usually comes with stone-ground mustard and that nice-looking rye bread in your pic (I wonder if it’s from Borealis, forgot to ask), but I am a saucy heretic and got a side of Carolina mustard. 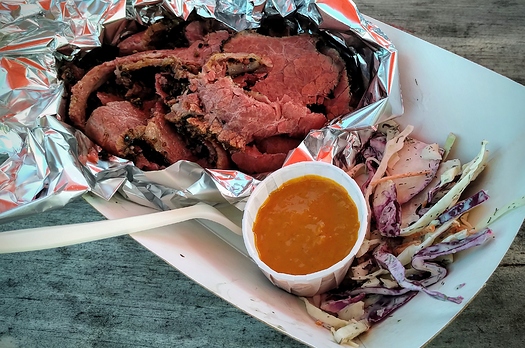 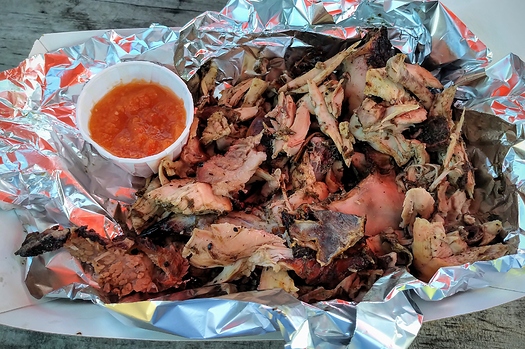 IMG_20190921_1122171~23391×2261 1.76 MB
I didn’t include a pic of the brisket since in the welcome shade of a red umbrella it looked a lot like the pastrami even after attempted color correction, plus your pic upthread is better. Also like the pastrami it vanished remarkably quickly.

Everything was delicious and we couldn’t have asked for better weather. My dining companions kindly forgave me for derailing our usual Morse’s meal, especially after I appeased them with an order of kraut balls to go

TL;DR: Agreed that if you like BBQ, just go already. Based on what Will said they should be open (when it isn’t pouring rain) through October at least. He also said he stuck it out through Thanksgiving last year but it was kind of rough; other than bad weather the limiting factor is having the water tanks freeze.

Thanks again for the post, I’m already thinking about a return visit.

What a fabulous report, I am so envious!! You certainly had a great weekend of weather too. Toum with the jerk chicken sounds amazing. And you can never go wrong with kraut balls…

I wish more pit masters followed his advice and learned to do brisket before opening because there are certainly many that don’t, especially away from the bbq power centers.

B, a transplanted Ohioan, went to school in both Austin and Houston. If I tell him about this place, it would be akin to torture.

Don’t tell him, just arrange a weekend up there and surprise him with it!

Lots to do with the spring onion around there too – Owls Head Transportation Museum is 20 minutes drive from there – cars and planes and stuff.

Oh we’ve been to that part of Midcoast Maine. Takes a little more planning these days. Last time we were there, we stayed right near the “Forest Gump” lighthouse.