Actually, I searched in some Italian language sites, and discover there is a third one in the same “bucati” format called Foratini.

Having lived in Italy for a while, I know there is quite a competition spirit between cities or even neighbouring villages, I remember an Italian explaining that they will label even food from the city next to their own as “exotic” food and eat only their own cuisine!

there is a third one in the same “bucati” format called Foratini.

Another word which very precisely means “thing with a hole in it”. Brilliant.

Another word which very precisely means “thing with a hole in it”.

I search bucati, and there comes another pasta: Fusilli Bucati Corti 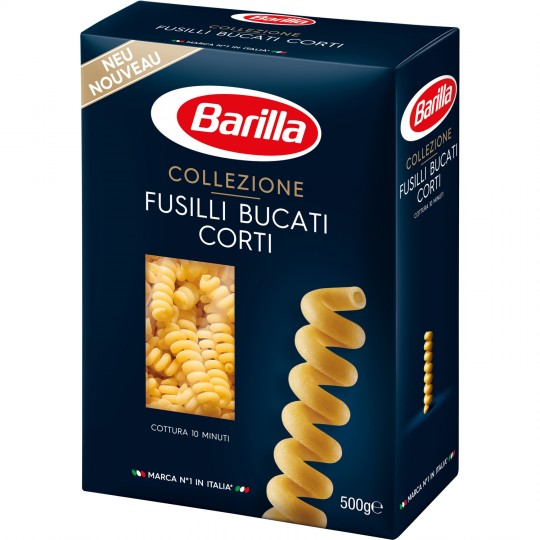 It seems to me that because I’m an English speaker I try too hard to get all these names defined, and perhaps Italian speakers treat the words on the pasta box as more of a casual description. Maybe that’s far from the truth.

No, you’re right about whole thing, this fusilli has a hole!

I went to the grocery the other day, and wanted to buy some lasagna. They were out of it - they had almost all their other pasta shapes, but I guess people around here were making leftover turkey lasagna or something. (I’d already read the bucatini article, but they didn’t even have a shelf label for that

) It’s possible that I’ll break down and try making fresh lasagna pasta myself, but probably I’ll just hope the next grocery I go to in a few weeks isn’t out of it.

Trader Joe’s no-boil lasagna noodles contain egg, which makes them more flavorful, and they are quite tender. I was happy to find them because I liked Barilla no-boil, but have been boycotting Barilla since their head publicly extolled homophobia several years back (he later issued an apology that was as hollow as macaroni).

have been boycotting Barilla since their head publicly extolled homophobia

On the other hand, it might be best not to look too closely into the personal opinions of the heads of too many other companies (I don’t mean they’re all homophobic, just that they’re not all good examples), lest you start running out of things to eat.

I think there’s a significant difference between when an owner/boss maintains immoral private opinions, and when the business is being run immorally or there’s corporate promotion of immorality. But there isn’t always a clear-cut distinction. And I think an owner/boss CAN do or say something privately that’s bad enough to boycott their company.

Looks like Barilla has done a lot since the controversy began.

The article talks about people (and I quote) “accusing Barilla of homophobia”.

You can’t really say that someone is “accusing” him, when he proudly said it himself on a national radio show. What they were doing by calling him homophobic was recognizing an obvious fact, not making an accusation.

“Look, our new CEO and CFO are gay, and Mr. Barilla has been forced to retire and turn over all his personal assets to the corporation, except a house and a car” doesn’t seem to be what’s happening here, though I didn’t read the whole story.

The story from the CEO, implying that he had no idea about Mr. Barilla’s views until he heard them on the radio that fateful day: Really? Come on.

Went to Safeway, and they not only had lasagna (which I have now made), but also had bucatini

So I’ll have to try some soon. I don’t remember the brand.