I remember liking whatever I had from a Tacos Sinaloa truck in Fruitvale years ago, though I’m fuzzy on the details. So I was keen to try their bricks-and-mortar location in Berkeley on Telegraph Avenue, a couple of blocks south of campus. We dropped in on Thursday night. It’s a narrow space with a glassed-in kitchen lined with counter space, so we perched in front of the assembly line. This may not have been the wisest move. Industrial corn tortillas are welded together on the grill; fillings are on a steam table (occasionally a clump of carnitas are plucked out and pressed into a crisp cake on the grill). The tortillas are dunked into the juice in the steam table trays, put on paper plates, filling spooned on, and the plate passed to another worker to top with salsa and onion. Audience mostly Cal undergrads who have no idea how to behave in a crowded space. Carnitas taco ($2.00) too crisp; al pastor too soggy and greasy. Decent but unremarkable flavour. Horchata ($2.00) is thin, and they were skimpy on the ice for some reason. Rather a disappointment. There are two better options a short walk from me near Market and Castro, and loads more in the Mission.

Things worked out better at Tacos Cala. The main entrance of Cala, a new upscale Mexican restaurant in Hayes Valley, is on Fell, but there’s a back door onto Hickory which leads to a small counter at the back of the kitchen and one metal standing communal table at waist level. There’s a rotating lunch menu (Cala is not open for lunch) of three or four tacos guisados. Tortillas are made in house (in fact the corn is nixtamalized in house). A taco is $3.50; aguas are $3, and there are bottled beers and wines available. The choices today were cochinita pibil, tinga poblana, rajas y papas (in a cream sauce), and braised greens (vegan, I think; I did not see one). I had the first two, and a jamaica (nice, not too sweet). The tacos are built on rice and black beans; heretical, but the rice soaks up the tasty liquids from the stewed fillings, which are served from attractive enamelled pots on a stove. Still a bit awkward to eat, but good flavours. Owner Gabriela Cámara came to the back to chat with the only other visitors, Tartine head baker Richard Hart and a friend, and I eavesdropped on their conversation heavy with big names while I tried to keep my face and hands relatively clean. I’ll be back to try their horchata and see what else is in the rotation. Tacos Cala isn’t open for dinner, but if you’re at Cala for dinner, you’ll be able to peek at the back space by going past the bathrooms; I did the opposite, sneaking a look at the bright, attractive main space of Cala with all the chairs up on the tables.

Tortillas are made in house (in fact the corn is nixtamalized in house).

Was hard to tell with the quantity of ingredients piled on top. It was at least good, but it didn’t assert itself as much as I might have liked. Thin, but it held together while I ate quickly.

Went back to Tacos Cala today. Had lengua and puerco en adobo, and horchata. Meats were good, well-stewed; not a revelation, but solid and tasty. I still can’t pick up the taco as presented without spilling half the filling, but there are real metal forks available to eat them down a bit, and I appreciated the freshly-made tortillas. The horchata was a bit understated - I don’t normally say this, but I would have liked a touch more sweetness and spice. 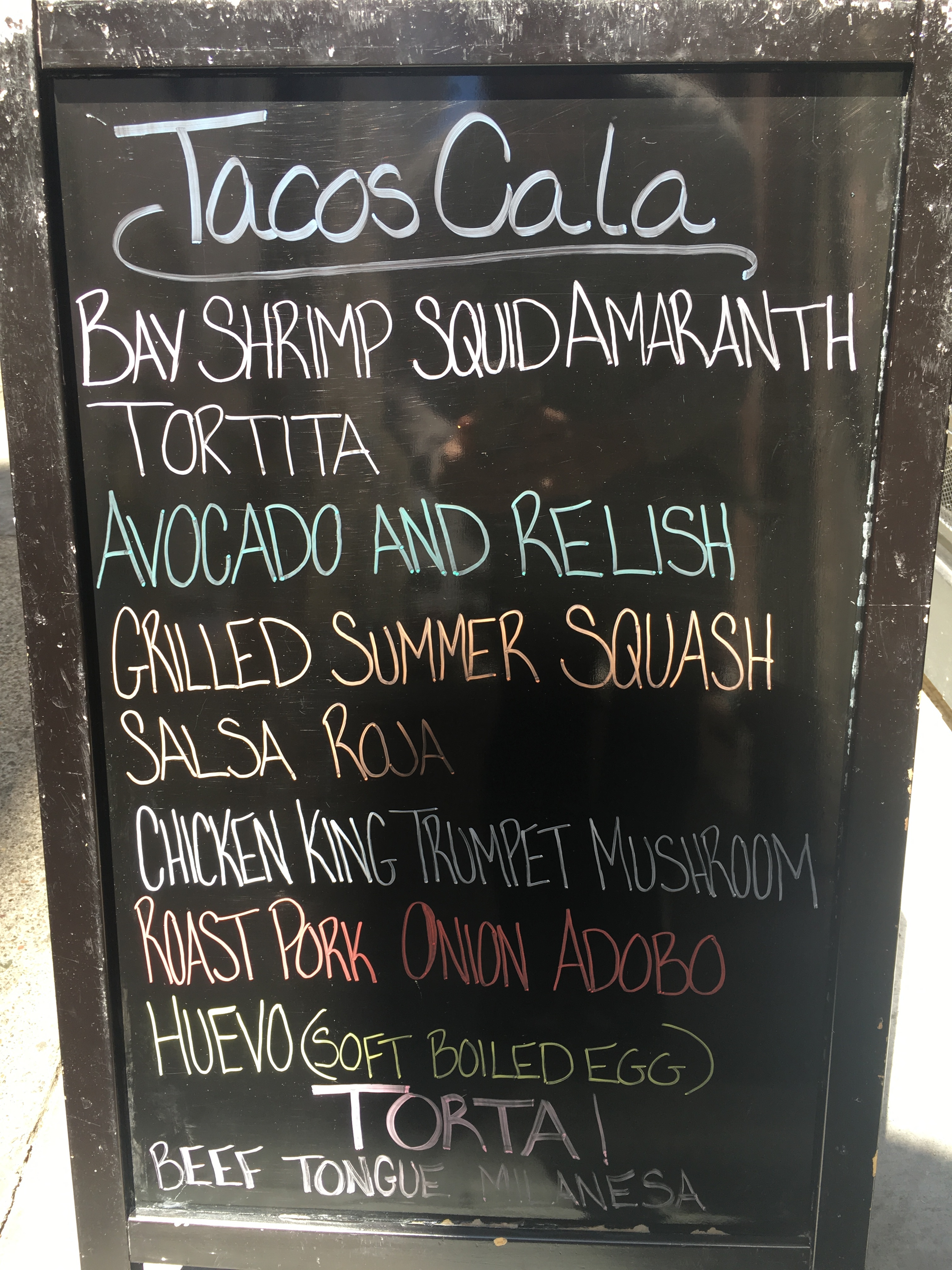 I tried the $12 special at Tacos Cala–3 of their tacos and an agua Fresca (we picked the avena, an oat-based horchata variant that wasn’t too sweet or spiced, perfect for the meal, YMMV). 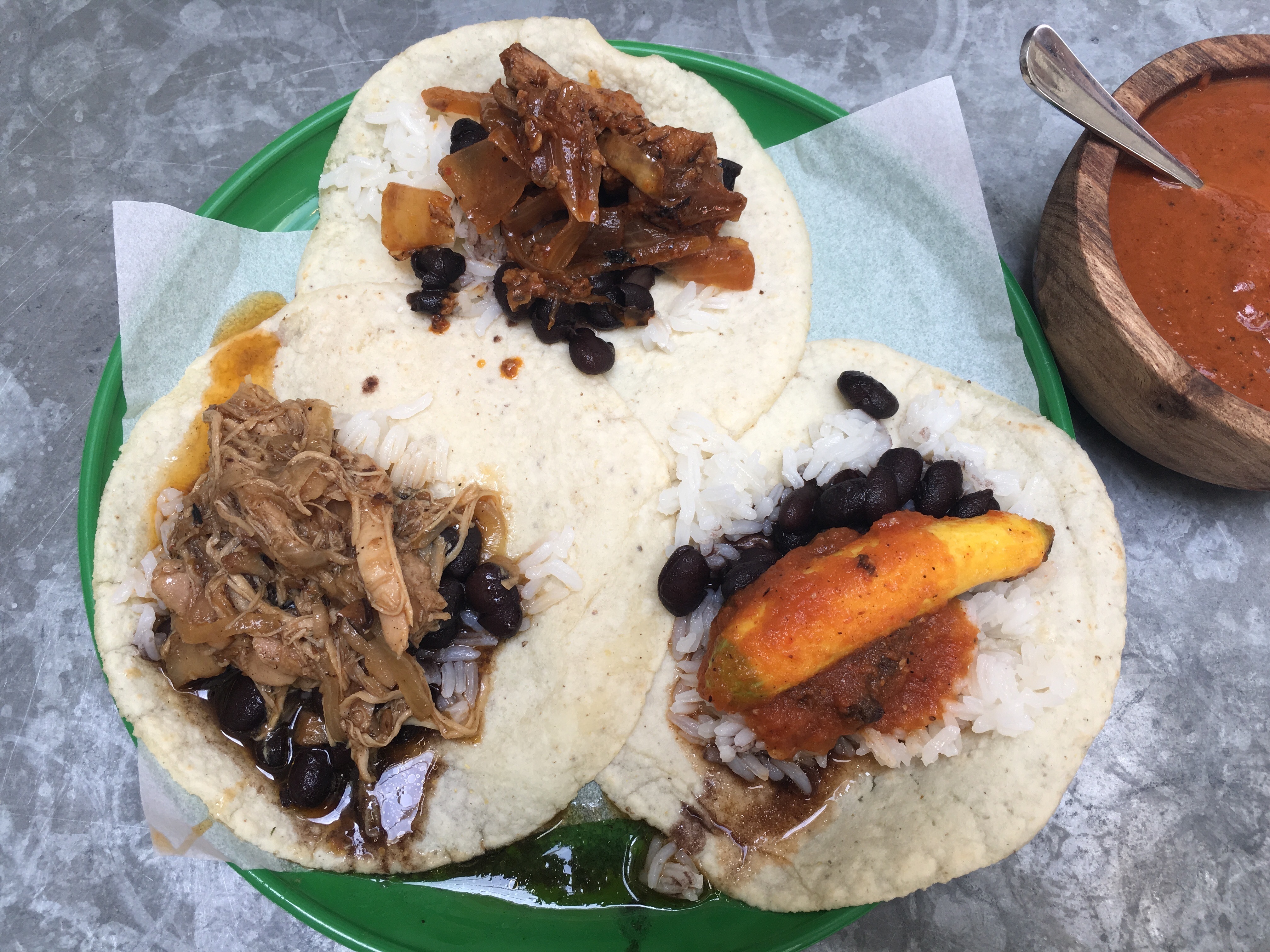 As @plragde noted, the taste of the tortillas didn’t jump past the stewed meat and rice flavors, but it was pliable and the texture helped grip the meat juices.

My favorite filling was the intense pork and onion adobo. The summer squash was also quite good— it’s not sliced, so the grilled juices burst into the rice and beans with each bite. The chicken and king trumpet mushroom was innocuous. 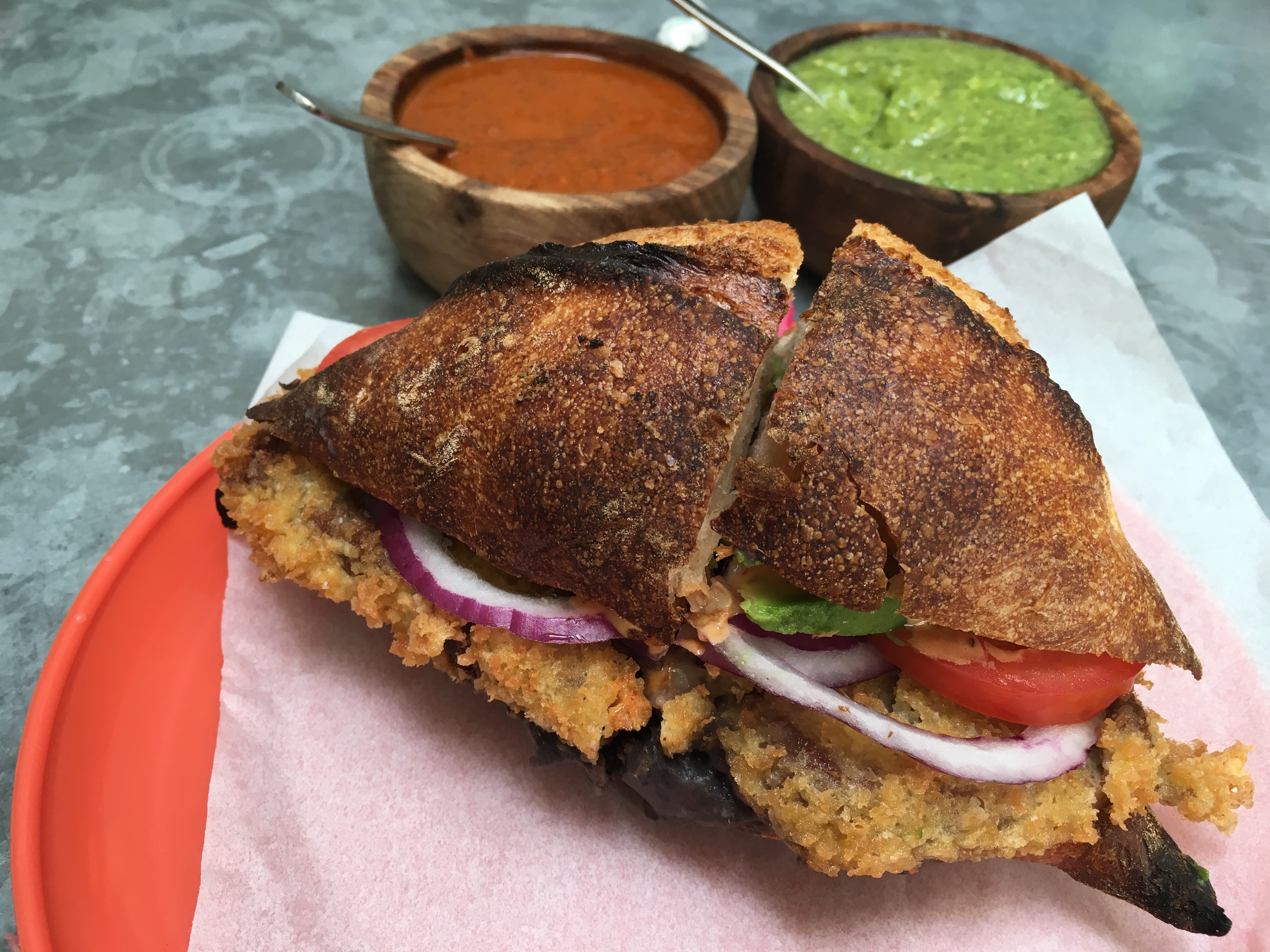 The torta of the day was the $14 beef tongue Milanesa. Wow, that’s a good sandwich. I was initially skeptical of the crusty bread-- upscaling banh mi or torta to a crusty bread makes them difficult to compress. Luckily, I was able to deconstruct Cala’s torta easily and and give the top a good Hulk smash before reassembling it. The crisp onions, juicy tomato, bulky texture of the breading, and soft, barely held together, tongue worked great with the crusty bread. There’s a smoky chili spread on the bread (chipotle?), which was used with restraint, and didn’t distract from the meat.

Enjoyed Taco Cala’s tacos very much in a recent visit. They did tacos guisado style, i.e. everything stewed for long hours, maybe overnight. We had one of each type of taco as a start. Shrimp/ pork machata, sunflower bud pipian, and chicken mole were great. Greens and poblano+potatoes were good. Egg was perplexing. Had the melon mint agua fresca.

The shrimp pork machaca taco had some small whole shrimp that added a bright and fresh shellfish taste to the pull pork and sauce mixture, although I speculate they might have added additional shellfish stock. The crispy (fried?) and salty sunflower bud balanced out the creamy pipian texture. Chicken mole had a hint of chocolate and was well balanced.

The egg taco- I just don’t understand it. I thought they would sauce it or add some spices to make the taco, but its just a soft boiled egg plopped on top of a bed of beans and rice, and then a tortilla. Is that common in Mexico?

These were what I call ‘designer’ tacos. Prices were high ($3.5 + 20% living wage service charge) for standing eating space or takeout. Though I must say they were very enjoyable and on a different level compared to typical hole-in-the-wall taqueria tacos. But what’s the deal with the 20% health charge?

Instead of cooking/ serving from adobo pots, now they went practical and did stainless. 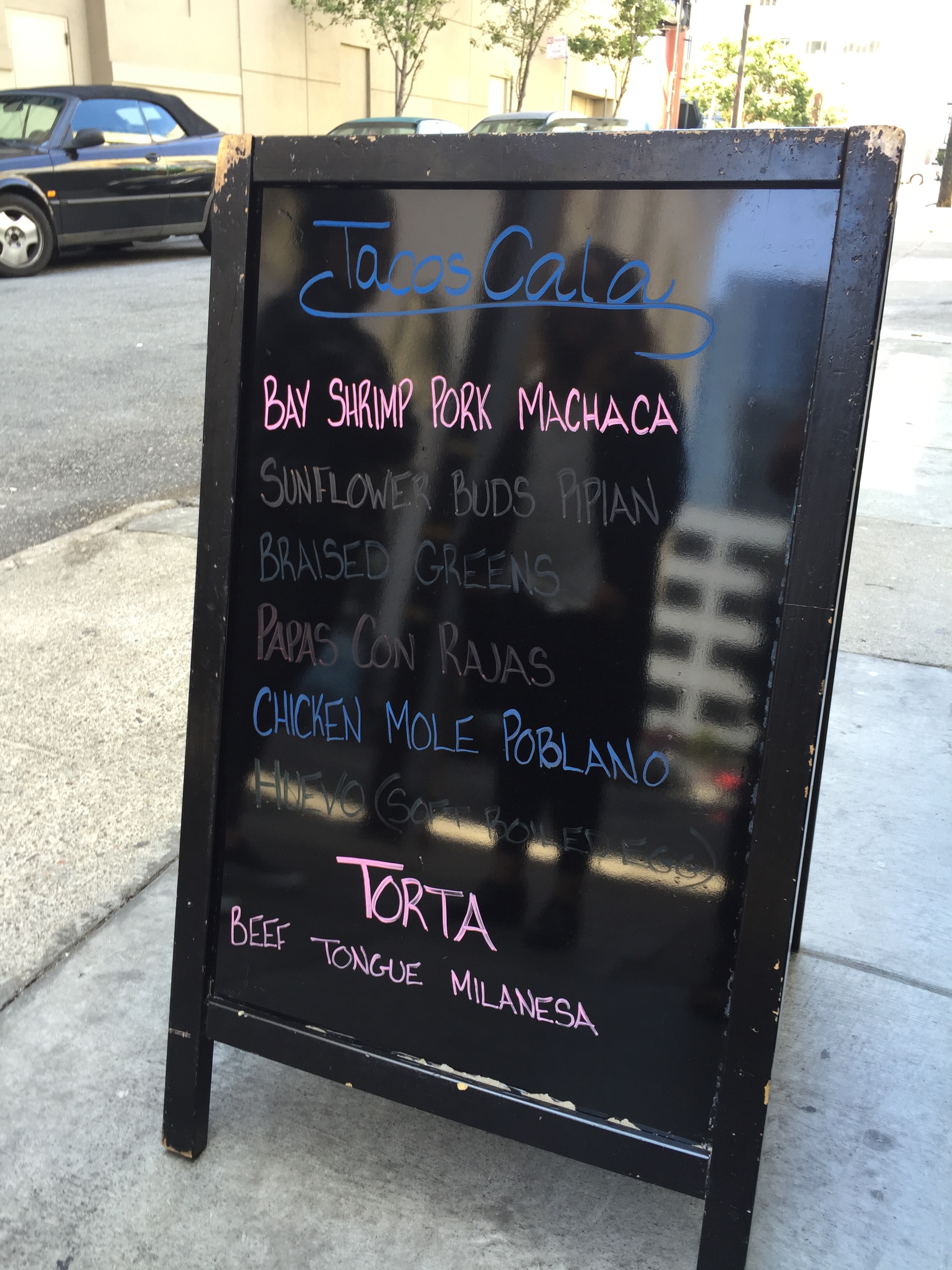 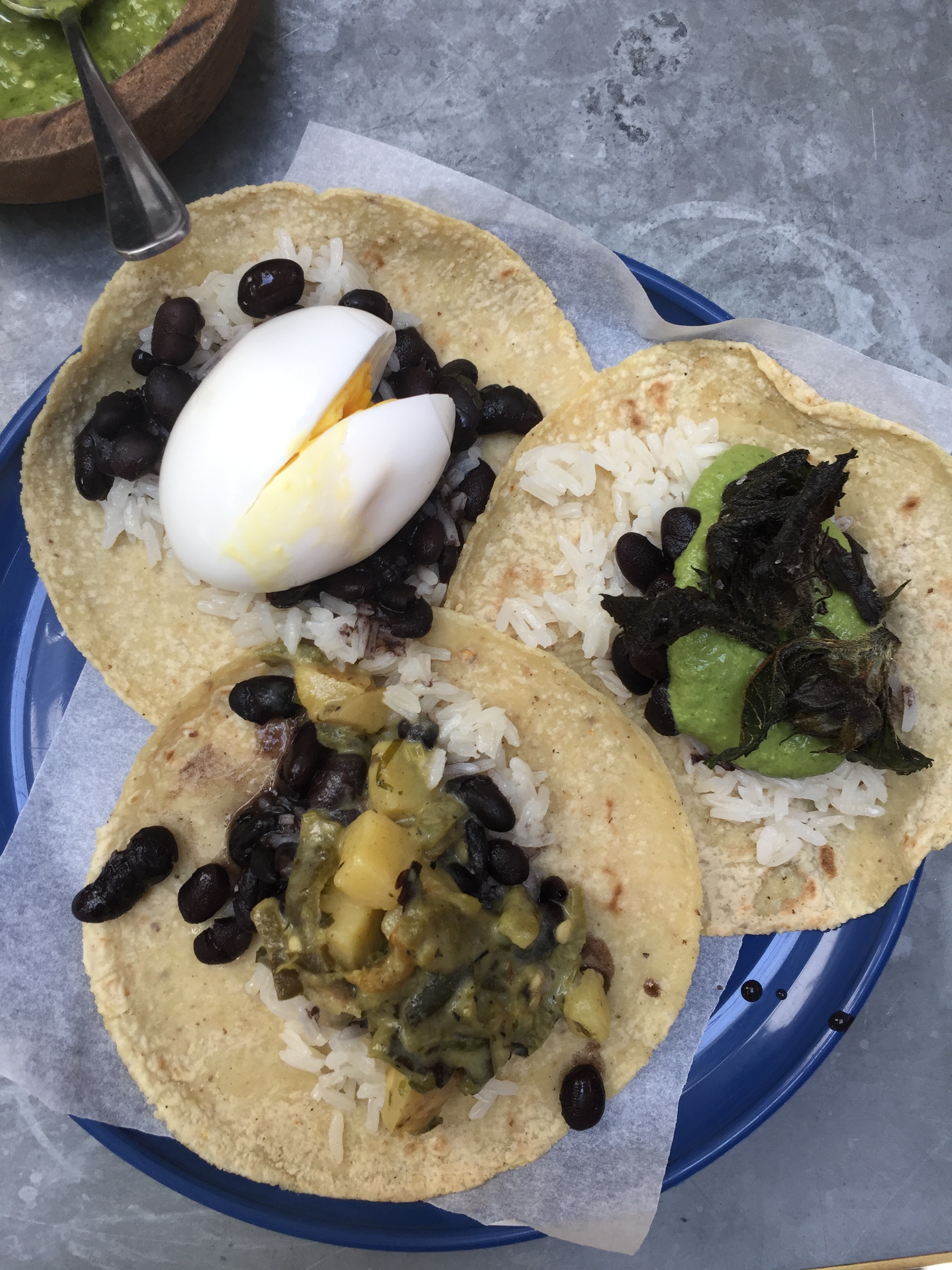 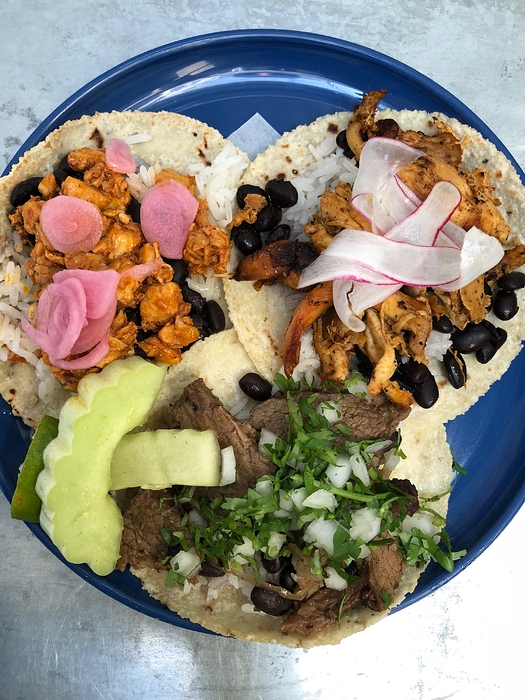 TacosCala.jpeg3024×4032 2.28 MB
Tacos Cala: Pescado adobada, carne asada and marinated chicken. Homemade tortillas. $4.75 each. These were all good but not great. They all have a small bed of plain white rice and some black beans which causes them all to taste the same in a way. None of the flavors really had a lot of punch. I felt the same way the last time I ate here, so don’t think I’d come back for the tacos.
1 Like
plragde (Prabhakar Ragde) August 20, 2018, 11:02pm #9

I stopped going to Tacos Cala, because while I like the idea of eating cheaply in the back compared to the prices in the front, the food wasn’t that cheap and it wasn’t that good. I could go to El Gallo Giro for less than half the price and enjoy it twice as much.

Yeah if they were doing the level of tacos of like Guerilla Tacos in LA does I wouldn’t mind the price, but they just weren’t very special. I walked by RT Rotisserie afterwards and regretted not trying that instead. Work brings me to that area 1-2 times a month around lunch so I’m going to start checking out some other places.

I’ve only had the whole takeout roast chicken (and sides) from RT Rotisserie, and that was worth the MUNI trip (a couple of times). The roasted cauliflower isn’t anything special.

I haven’t tried these yet, but I’m suspicious of plain white rice… Tacos de guisado in Mexico (City, at least) use Mexi-rice (Spanish), as far as I saw.

I did love Cala, and would go back in a heartbeat. Also, her original restaurant in CDMX, Contramar, is a knock-out.