My one recommendation is Metro Balderas 1 at 688 Almaden Avenue, San Jose.

Thanks for the rec. Looks legit from the pictures. I don’t go to downtown SJ too often but will definitely keep it in mind if I’m in the area.

What are your favorites in RWC?

B&M in RWC- none. Tried those El Grullense, Los Gemelos, etc variations, and I wasn’ t particularly thrilled about them.

Distrito Federal. Mexico City, that is.

There’s no lard, or any other kind of added fat, in a corn tortilla, either in the US or in Mexico. You might be thinking of flour tortillas (which are not used for tacos around here), or maybe corn tortillas warmed on an oiled grill. But I agree, flour tortillas made with lard are much better than the shortening version.

B&M in RWC- none. Tried those El Grullense, Los Gemelos, etc variations, and I wasn’ t particularly thrilled about them.

Good to know it’s not just me being picky ;). Now that you mentioned Los Gemelos I do recall going there and having a pretty mediocre meal considering the rave reviews. My favorite taqueria on the peninsula/south bay is actually Pancho Villa in downtown San Mateo. They do pretty good chile verde pork and carnitas and their grilled shrimp is quite tasty as well.

Years ago, a local foodie Sushi Monster did a taco crawl and rated every taco place around RWC. Unfortunately he didn’t eat pork so the list is not helpful to the question you are posing, and the age of the list (more than a decade ago) also doesn’t help.

And if you ever make it to Oakland, El Paisa does a nice job with their tacos.

Read Luke Tsai’s piece on El Paisa@.com (Top 10 bites of 2015) earlier. He loved the place and especially the tripa tacos. I went to the zoo on Saturday, and dropped by their place nearby on International Blvd for some tacos beforehand, as part of my ongoing quest to find great tacos that compare well with those from Mexico. Tacos I had, and in rough order of preference: tripa x3 lengua suadero cabeza asada pastor chicken (Choriza was not available that day. I didn’t get the seso/ br…

It’s a big schlep from Sunnyvale, but I’ll update you that Los Carnalitos in Hayward recently fixed their vertical spit (trompo). I’ll ponder its sweetness next time I go!

[image] Cemitas, a Pueblan type of torta, are hard to come by in the Bay Area. Los Carnalitos’ version is a monster sized stack of milanesa, slightly melted quesillo (a salty string cheese), avocado, and a smoky chili paste on a brioche like bun. I’ve had a bunch of these from the Redwood City food truck, and I am pumped that they finally opened a brick and mortar in Hayward. If they were located in San Francisco, this would easily make it onto one of those listicles of the best sandwiches. …

Years ago, a local foodie Sushi Monster did a taco crawl and rated every taco place around RWC.

I remember reading about that a few years ago and at the time it was a great resource. I believe a few of the places that I’ve tried were based on recs from his list but as you said, being that it’s 10 years old now it’s probably quite outdated.

It’s a big schlep from Sunnyvale, but I’ll update you that Los Carnalitos in Hayward recently fixed their vertical spit (trompo). I’ll ponder its sweetness next time I go!

Good to know! If I’m ever in the area will keep it in mind but as you said it’s a pretty long schlep from Sunnyvale for tacos.

Based on a single trip to the Los Carnalitos truck in Redwood City I was a bit disappointed, though that might be from a combination of having it on my list to try for so long combined with ordering disappointment and confusion, when they did not have the pambazo or huaraches. I didn’t love the quesadilla al pastor, largely because it had a lot of chunks of uncooked pineapple embedded within, making the whole combo too sweet and a bit puckery from the uncooked pineapple. 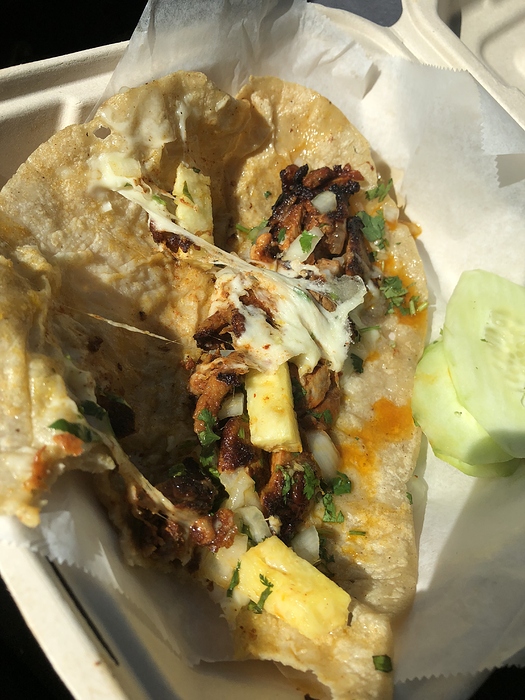 The uncooked pineapple is a little odd, especially in a quesadilla (yours looks unripe too) . Not typically, but I have had stuff from them with too much pineapple— I’ll take a future lesson from you and ask for no pineapple.

Hmmm. Is that a flour or corn tortilla? They used to make them, and huaraches, with fresh masa to order. I know they stopped doing cemitas

I got the quesadilla over the taco because the pictures on the side of the truck showed them as thicker, oblong (corn) tortillas whereas the tacos are shown as standard thin pressed tortillas. The tortilla seemed like it could have been pressed to order, or was at least made that day and not cooled, but didn’t have outstanding corn flavor. I have had similar tortillas at the El Grullense just down the road.
After hearing a Good Food podcast in which one of their tortilla experts mentioned that a a lot of tortillerias make tortillas with a mix of masa harina and in-house nixtamalized masa I have retroactively classified the many tortillas I have had that are obviously not factory pressed and cooled, and have a better texture and flavor than fresh-pressed masa harina, but are still a bit disappointing flavorwise into this category. Or it could just be that the type of corn that is generally getting nixtimalized is blander than that in some of the best tortillas out there.

I recommend a taco truck right off 101 at the Mt View / Palo Alto border. It’s usually in the parking lot of the Video Only on Charleston. I don’t remember what the taco truck is called. It tends to roll up around 11am and be gone by 2:00pm ish. Sometimes the truck moves, it was alongside the costco for a while, it was actually on Charleston for a while, and now ( early 2019 ) it’s been in the Video Only lot.

There is no seating. The one thing I will warn you is their orange sauce is NUCLEAR. The green sauce is a little bland but has a nice acid tang that a green sauce should have - it’s just the orange to beware of.

I have eaten the famous places in DF, and I’m partial to the style we have here which is admittedly different. I like a little more crisp, which we do, although I miss the pinapple you get with every taco in DF. I prefer a spice-forward approach, because the spice is middle eastern and not that actually spicy.

This place does do “tacos by hand” ( hecho a manos ) and has a spit in the truck. The exact quality differs by time of day because sometimes you get the crispy bits that have been on the spit for a while, but in the lunch rush you are getting the succulent innards, if that’s your style. The “proper” DF places have two spits.

Reading here, I don’t think this place will satisfy you, but it’s close enough that it’s worth a shot. It is very convenient if you are going southbound. However, since it is all hecho a manos, it can be slow.

Wait, this truck? I have passed by it so many times! I guess I will have to stop by next time.

Not Sunnyvale or South Bay, but Janelle Bitker has a nice article on DF style al pastor on trompo around the Bay Area, including a few sources around SF and Oakland: 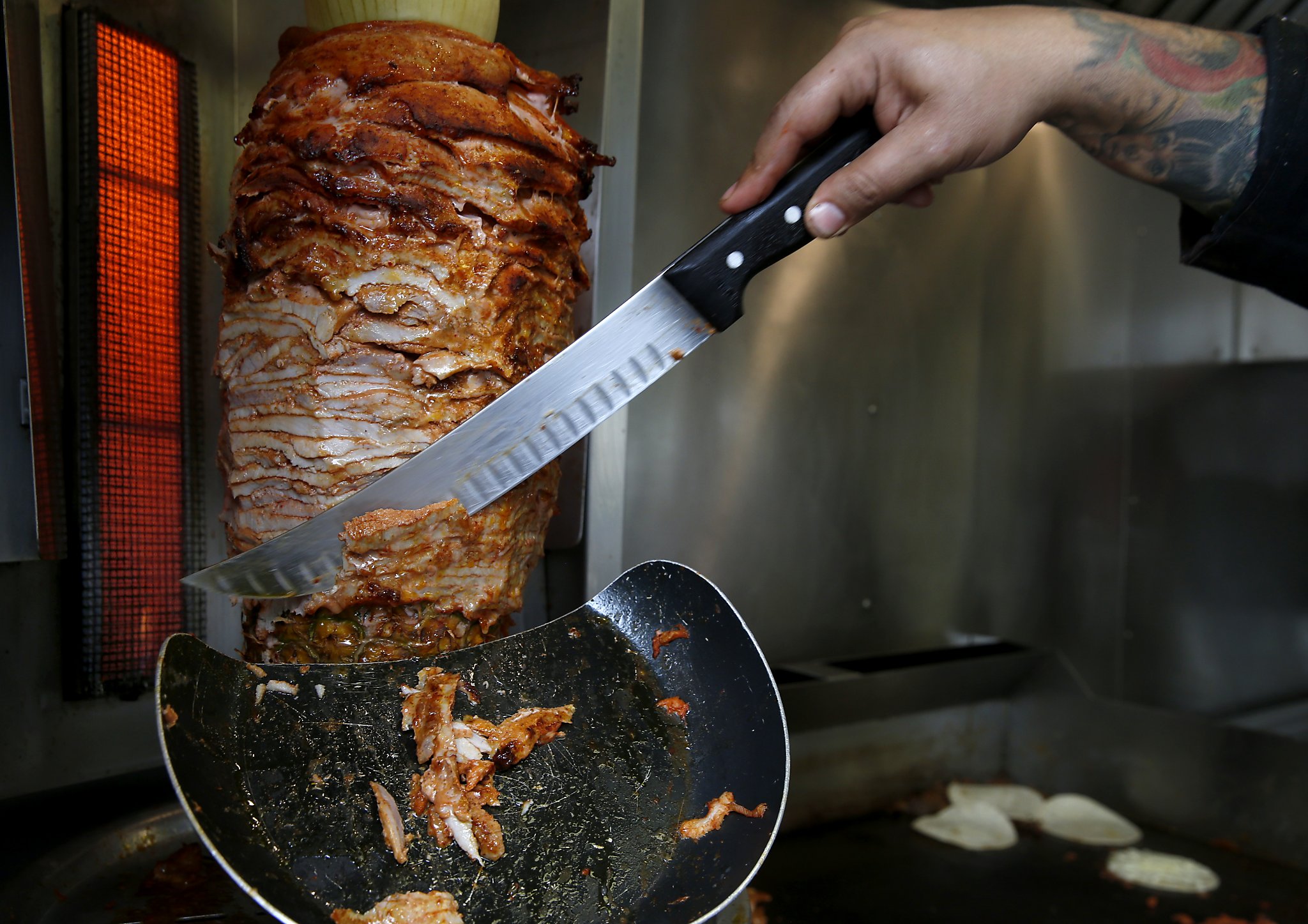 Despite the Bay Area's depth of regional Mexican restaurants, one delicacy remains conspicuously tough to find: traditional al pastor, cooked on a vertical spit with pineapple. That’s starting to change thanks to a new generation of chefs serving al...

@hyperbowler if you still go to Mission Bay, there’s a truck there.

Do you remember what this truck is called/know if this is still where it usually parks? I need to try!

Pretty sure it is this one:
https://www.eltacoranchero.com/location.html

Yelp says they are some time at the O’reilly’s on California St/ San Antonio. I recall driving by a taco truck there a few times as well.

Elena, enjoyed your abalone story plus others on The Six Fifty. When are you going to write about all the taco trucks from RWC to MV?

Great, thanks. On the hunt for spicy dishes and noticed your comment on their orange sauce.

Glad you enjoyed the abalone story! I need to spend some serious time getting to all the taco trucks…a story like that is definitely on my to-write list. What are your favorites?

That’s the one, went there this afternoon. Delicious, had Al Pastor tacos and gorditos. So good. They let me step in for a quick photo of the meat on the “spit.” 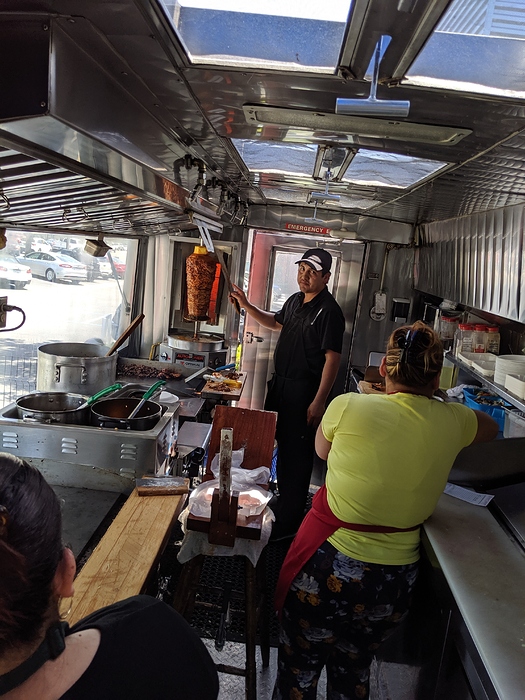 The tacos featured the crunchy pieces and the gorditos seemed more succulent. I’m no expert, but, I’m guessing if you like Al Pastor, you’ll be happy with El Taco Ranchero. 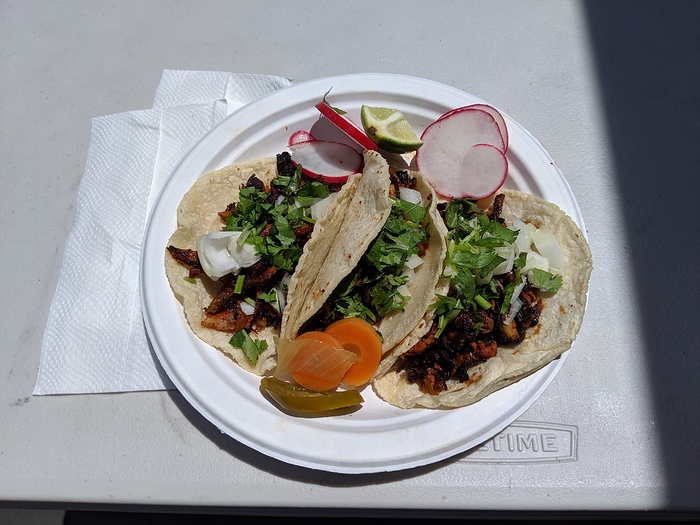 Thanks for the report and pics. Their website lists their hours as ​Monday - Friday 11am to 3pm,
Saturday - Sunday Closed. Do you know if that is accurate? Unfortunately will be pretty difficult for me to go there for lunch on a weekday. 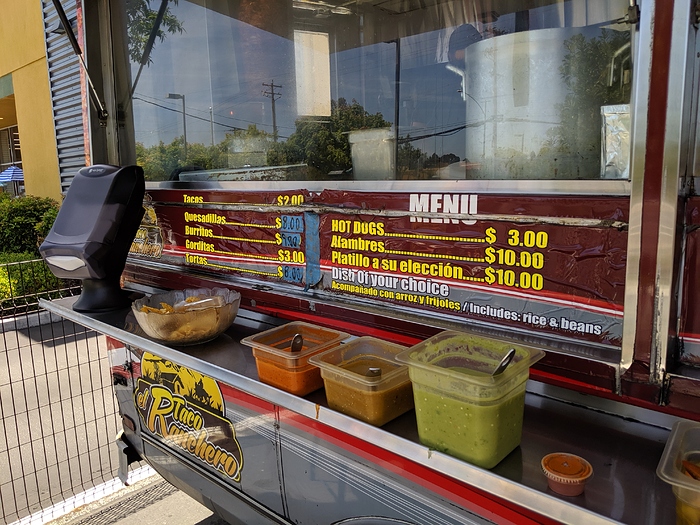