Today’s internet rabbit hole trip was sponsored by a dish listed on the menu at Skyiew Noodle & Tea in Pittburg. The #5, 安徽牛肉板面 Anhui Beef Plate Noodles look delicious from the photos. Has anyone tried this dish there or elsewhere? If its extra encouragement to go there, they appear to use hand-pulled noodles of some sort and list knife shaved noodles for other dishes.

Here’s what I dug up from the web about the dish. I’m not so clear on the defining features/flavors or the history of this dish. It seems you melt butter/suet and oil, infuse dry and wet aromatics in it, braise beef and chilies in it, simmer the strained solids in a water and tomato sauce (ketchup?) mixture, and serve the soup with a boiled egg and other stuff. Those seem to be the core elements, but even these four recipes are very different. Skyview looks to be topped with pickled vegetables and not have an egg.

To my knowledge, this is the first restaurant in the Bay Area to advertise a dish from Anhui, an area often described for having one of China’s eight culinary traditions. There’s overlap between Anhui cuisine and that in the regions around Shanghai and Jiangxi, but a lot of the Anhui specialities use local ingredients that I wouldn’t expect to see here.

Looks like a real find. The jiaozi pics on Yelp look good, too. If they put put pangolin on the menu, I’m taking a cab all the way there just to try it.

Some said that nowadays, more workers in the kitchens of Shanghainese restaurants come from Anhui. So maybe one just needs to convince the restaurant to make something from Anhui.

Even in Shanghai many of the restaurant employees (both kitchen workers and servers) come from Anhui. This caused an odd problem for me on occasion. I had learned enough Shanghai dialect to order food, but knew no Mandarin to speak of. Often I could not communicate with a newer server, and the owner or a more veteran server would come to my aid.

Based on this sign, Skyview might be owned by people from Taiwan. So Anhue dish cooked Taiwanese style? Perhaps that’s why Skyview doesn’t serve the dish with an egg. Also, the “plate noodles” look pretty vanilla to me. I.e. not so “plate.” Will check this one out at some point. Thanks for the find.

I finally got to Skyview Noodles and Tea, which I’ve since learned has a writeup in the East Bay Times. 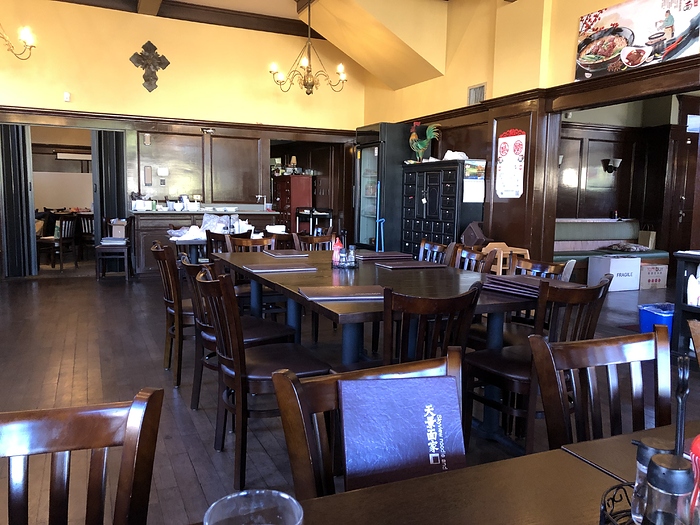 Ming Chu and Cathy Jing, part-owners of historic Liberty Hotel in Pittsburg, lacked tenants for the building’s restaurant, and decided to nourish Cathy’s passion for cooking and use the space for their own regional Chinese restaurant. Cathy, from Gansu, cooks, and oh does she cook! Ming, her husband, a civil engineer originally from Taiwan, works the front of the house.

The menu struck me as emphasizing Sichuan/Chongqing and Shaanxi dishes. Ming and Cathy explained that Gansu and Shaanxi, as Northwest Chinese regions, have similar foods but generally Shaanxi food uses more vinegar. 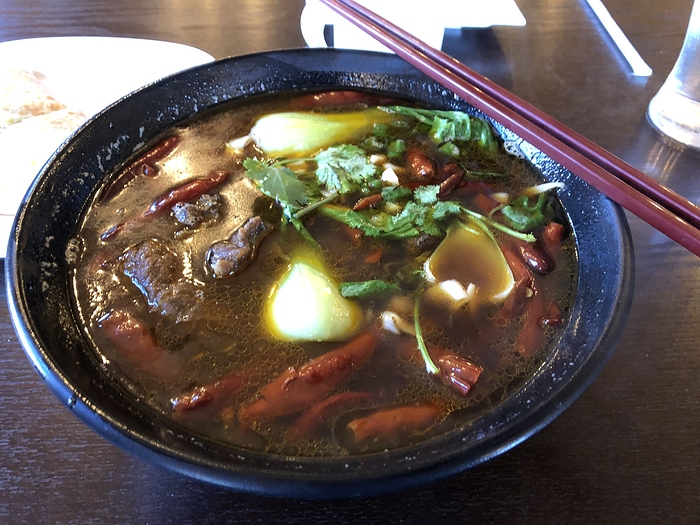 The “Anhui noodles” are different than versions I had googled for the original post, and are also unlike the version Melanie Wong reported on two years ago. Not to worry-- it’s complex and intense, actually the spicy version of their beef noodle soup, and a damned fine dish whatever you want to call it. The complex and intense base contains 15 spices, each of which they store in an antique apothecary chest. I tasted cassia and several unfamiliar flavors, and spotted some 草扣 / Cao Dou Kou / Alpinia katsumadai / “Grass Cardamom”. Cathy used to make this dish with hand-pulled wide noodles, but it was too labor intensive to support. I got this with the knife shaved noodles, which despite their different lengths and sizes, cooked evenly and chewy! 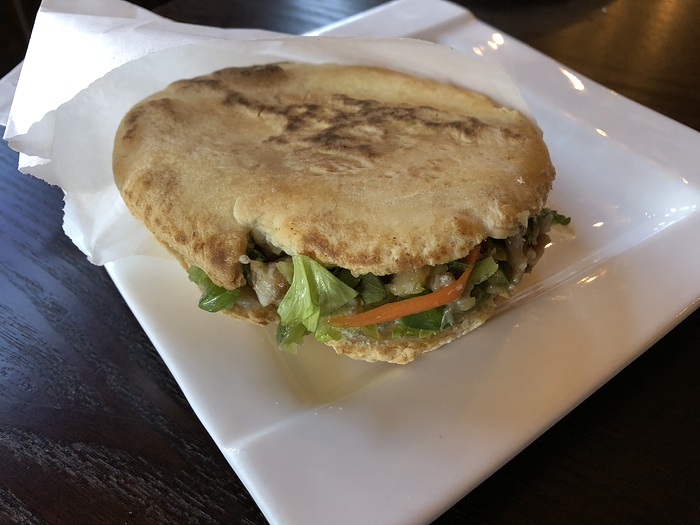 Ming said the roujiamo bread is a two step process: pan cooking, then baking, and they are sliced minimally through, pita or gordita style, and filled while keeping the bun in one piece. The filling had an excellent balance of greenery to the little bits of fatty pork. 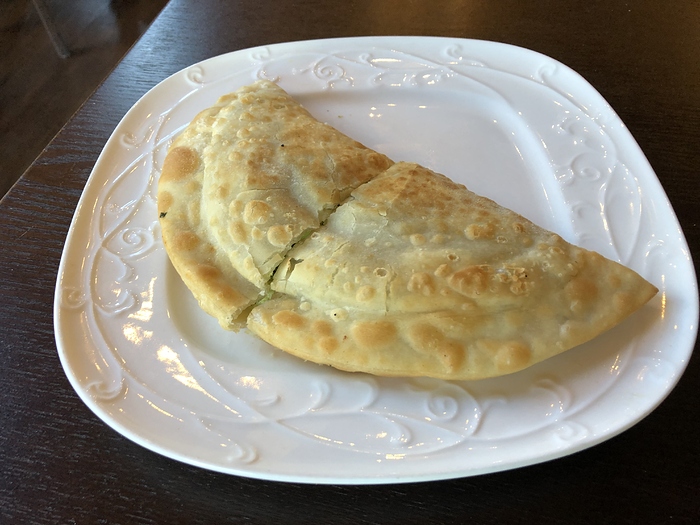 Their veggie pie isn’t unique to Gansu, but might be the best rendition I’ve had. Greaseless and filled with green allium (chives?), vermicelli, and eggs.

The Victorian-era interior design is lovely, and I’d encourage anyone who lives, or is passing through, the area to go grab a bite. My food came out promptly, but Ming said they are having difficulty finding more full-time help, and that causes a bottleneck when it gets busy.

Do they have Lanzhou La Mian on the menu (after all, Lanzhou is the capital of Gansu)? Or have they abandoned hand-pulled noodle altogether?

I didn’t know it when I ate there, but looking back at an old menu, they did at one point have “Lanzhou Beef Noodle” early on, and it’s been gone for over a year. FWIW, I haven’t had Lanzhou Lamian in China, but for my taste, the broth and noodles at Shinry Lamian in Fremont, which Jonathan Kauffman profiled for the Chronicle, impressed me. They also have Dongxiang sliced potatoes, which are like NW Chinese gravy fries. If you’re in the mood, it’s a 20 minute bus ride from Fremont BART (and their $5.95 Jian bing, though smaller in size to Tai Chi, is closer in price to what you’re used to, and is probably the best restaurant one available right now

Anyway, Skyview has abandoned hand-pulled noodles altogether, and so the knife-shaved are the only non-machine made noodle. Ming said the Anhui noodles are the spicy form of the “beef noodle soup with vegetable” 酱香牛肉面. The beef for the Anhui noodles was in big chunks, very different from the little cubes at Shinry Lamian or the slices common at random places listing “Lanzhou” noodles.

The seemingly Shaanxi menu shouldn’t have surprised me— I have a friend from Gansu (Lanzhou actually), who used to take his visiting family to South Bay Shaanxi places as its the closest to the food they ate when they lived in China. I did a face palm on my way home for not asking her if she was from Lanzhou, or if she knew of Shinry Lamian or that other new place. Ming said she was not a chef by training, but by about a year, she might have been the first Gansu-born Bay Area restauranteur to serve Lanzhou Beef Noodle soup.

The “Lanzhou La Mian” places in Shanghai (most actually run by people from Qinghai) always also have knife-shaved noodles as an option. The true LLM broth, however, is lighter snd clearer than shown in your picture, and the topping very spare (and always thinly sliced beef or lamb). Yours looks more like a Taiwanese Beef Noodle Soup, but maybe TBNS originated in Anhui