They lost their star a few years ago. Chef Melissa Perello’s other restaurant, Octavia, has one star. Star or not though it’s a pretty good deal especially if its one’s first visit.

is their $65 tasting menu available all the time?

I overheard when a waiter was describing it to another diner that they don’t always have it. It wasn’t listed on the menu either FWIW.

I had dinner at the somewhat recently reopened Frances a little while ago. Frances has been doing a series of prix fixe dinners with their FXMP pop up series recently, with owner/chef Melissa Perello back in the kitchen. A portion of the proceeds of each dinner is donated to a charity. For the one I went to the charity was Jose Andres’ World Central Kitchen. Food was $110 including service and tax, with optional drinks separate. They had a wine pairing as well.

hog island, earthquake bay OYSTER, verjus, pluot, shiso
Dinner started with an oyster, with shiso leaf and pluots. The licorice-y shiso and sweet pluot additions complemented the oyster well, rather than overpowering it. 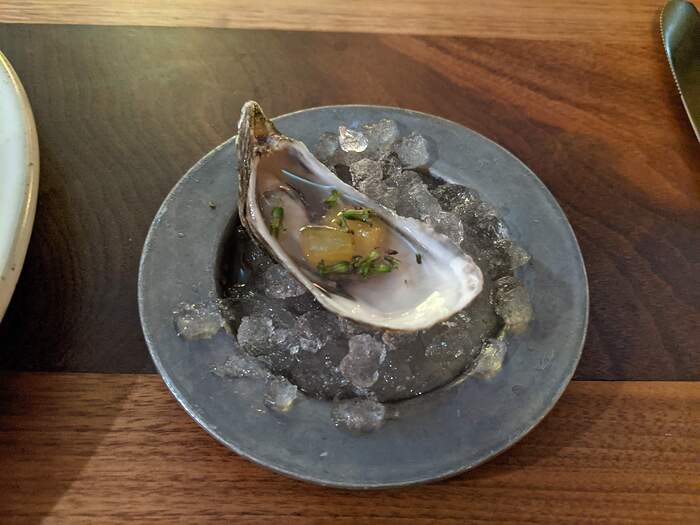 fifth crow ZUCCHINI & TOMATOES, charred onion tapenade
A delicious summery dish. It was Indian summer I guess here in SF. The zucchini and tomatoes were perfectly ripe and fresh. The sauce tasted like a smoky Mexican salsa. There was also a labneh like yogurt as well to add some creaminess. 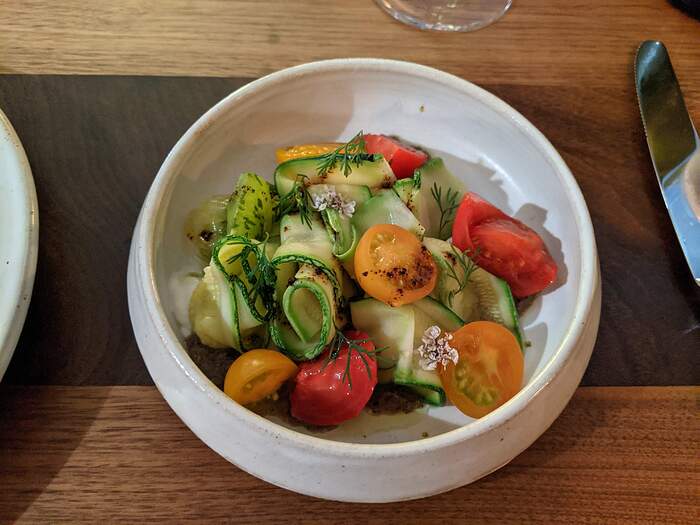 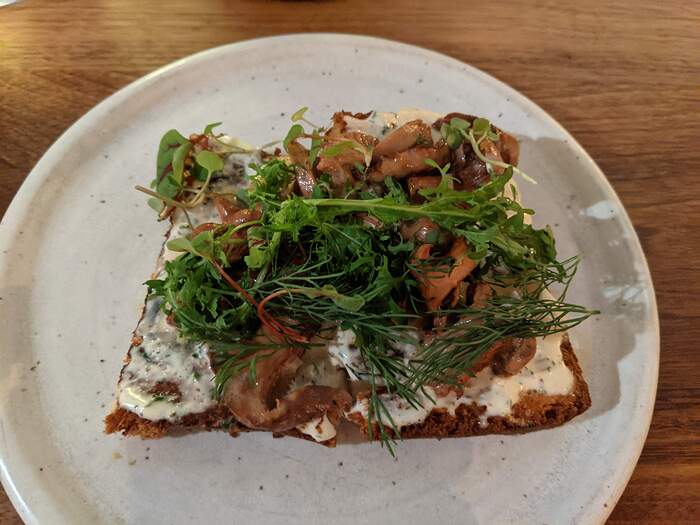 escarole & treviso SALAD, morettini pear, pecorino, almond
Very good salad. Treviso is apparently a type of radicchio. Its bitterness, along with the sweet pear, salty pecorino, and crunchy almond gave the salad a nice mix of flavors and textures. Pristine vegetables and fruit. 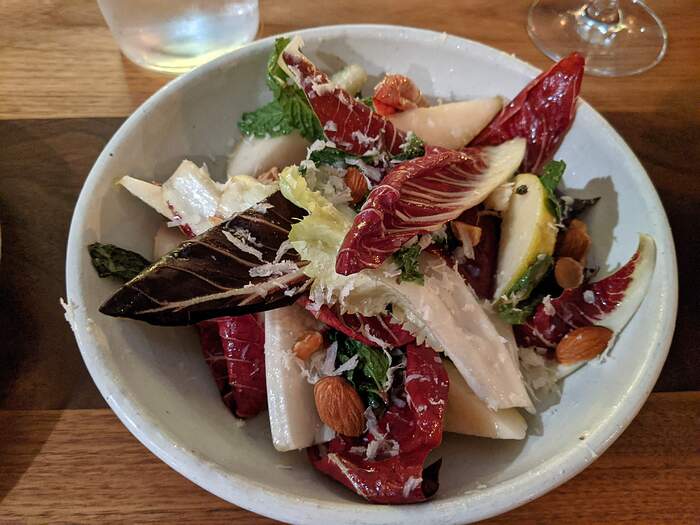 PACCHERI, pork neck ragoût, caramelized napa cabbage and whey
An excellent pasta dish, my favorite dish of the night. Paccheri are like big rigatoni. They were nicely al dente and toothsome. Nice comforting porky sauce punctuated with the slight zingy acidity of the whey, which I think is kind of an unusual ingredient in pasta sauces. 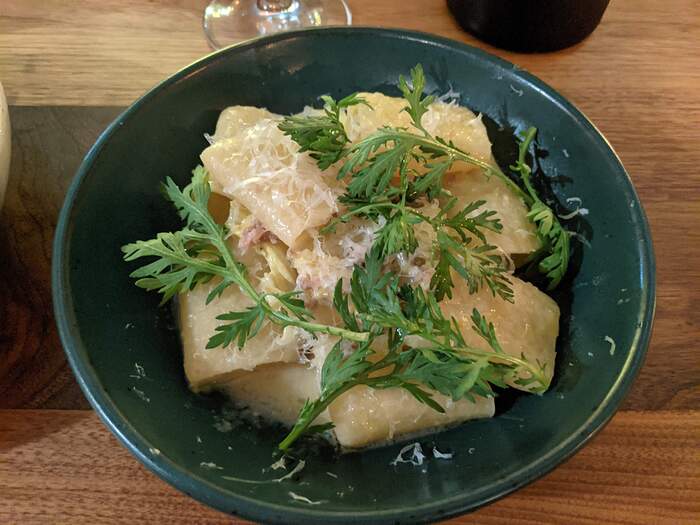 local BLACK COD, grilled savoy cabbage and smoked fumet
fingerling POTATOES with herbed aioli
The main course was a nicely cooked piece of cod with crispy skin, accompanied by some slightly charred savoy cabbage and a little bit of broth-y liquid underneath. This came with a side of I think roasted potatoes and an herby aioli. 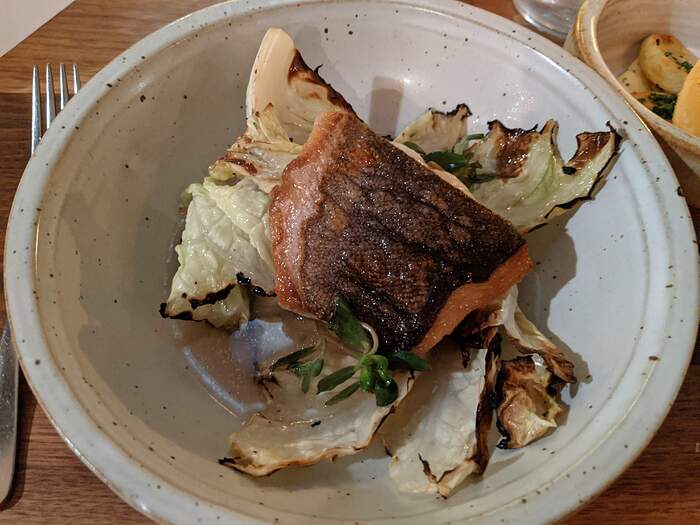 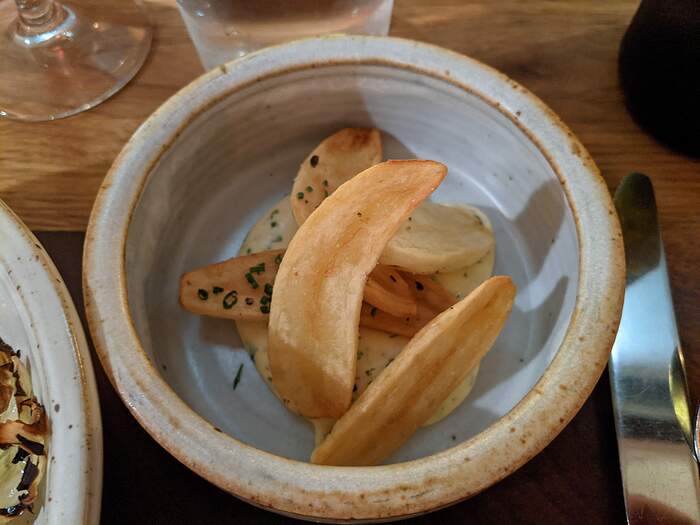 burnt honey ICE CREAM, fig and huckleberry
Finally for dessert a nice scoop of ice cream with fruit. The burnt honey had kind of a caramel like taste. 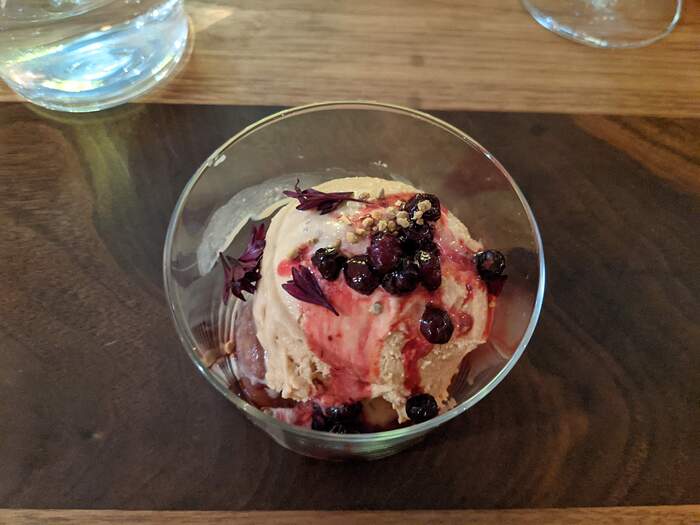