Salting those pieces of meat ?

For those who pre-salt skin-on poultry, do you feel the salt works its way “through” the skin and into the meat?

From my experiences, whatever method you use, as long as you master it, you can get good results. Personally, I think it’s the hardest to master salting after cooking, but I imagine there’s people for whom that approach is intuitive.

Make this Zuni chicken recipe and come back and talk to me. 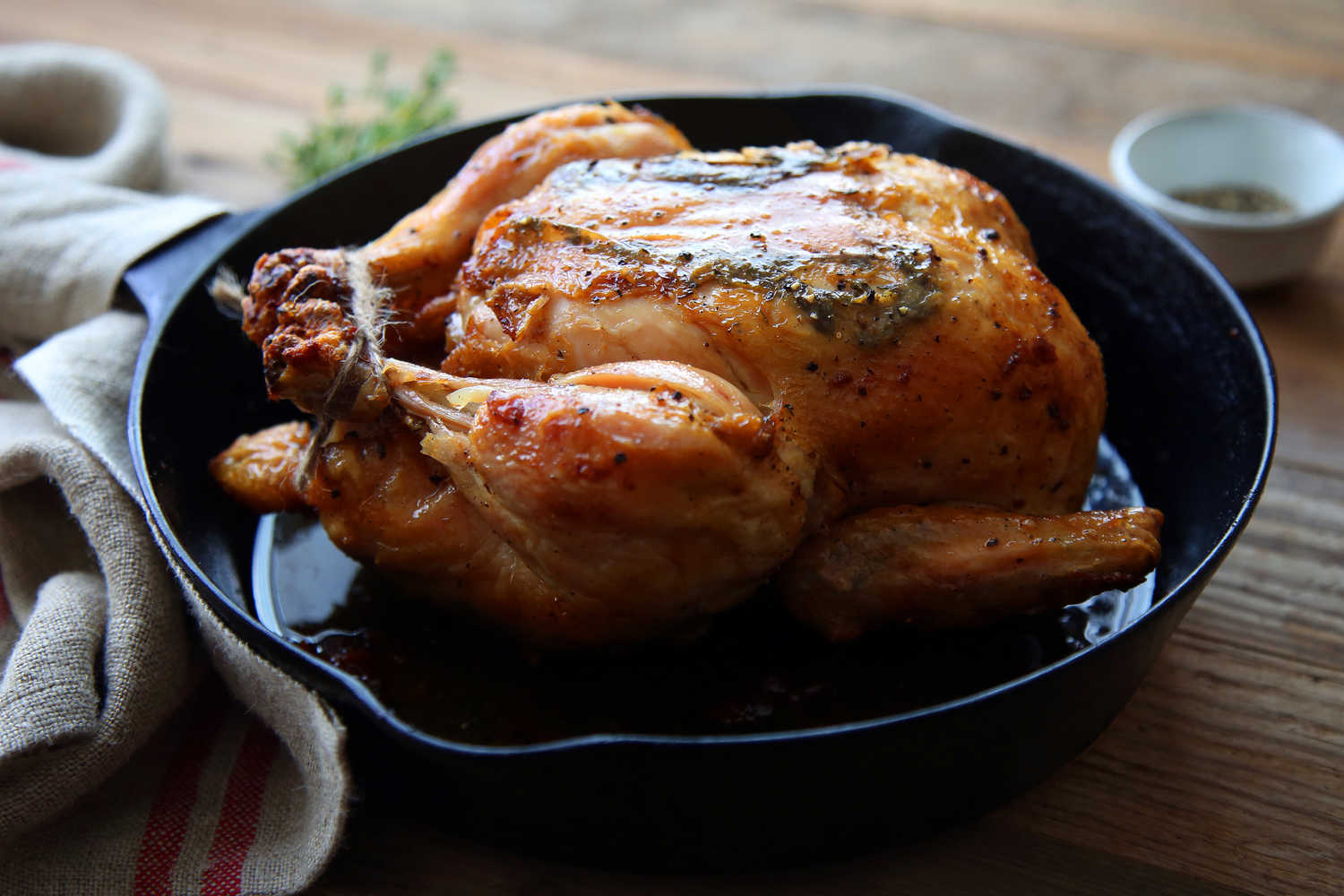 You don’t need a brick oven for this perfect roast chicken from the legendary chef Judy Rodgers — but you do need a hot one, and a day or so to dry-brine the bird before using it If you don't have the time to dry-brine, don't You'll still end up with...

The steamykitchen post informs that table salt won’t work; you must use a coarse salt. But the author doesn’t explain why that’s the case. Does anyone here know?

For those who pre-salt skin-on poultry, do you feel the salt works its way “through” the skin and into the meat?

No . But I feel it draws the moisture out of the skin to make it crisp up better .

How come in the case of poultry it doesn’t reabsorb the moisture?

It does. Its called dry brining.

I read the recipe. My question is how does it make crisping the skin easier if the moisture is reabsorbed?

Doesn’t sound right to me. Did they site any science behind their conclusion?

I don’t have the Zuni recipe handy, but I do know from plenty of experience that the salt is absorbed into the flesh but the skin is left very dry. This is when the bird (or whatever) is salted and then left uncovered in the refrigerator overnight, or even just all day. I do have some dim understanding of why, but for all I care it’s juju. It works. And Yes, the flesh gets salted, is moist, and quite delicious.

My understanding and results of salting is that it pulls water to the surface which is dried in the fridge. The results speak for themselves. Crispy crackling skin

You don’t need a brick oven for this perfect roast chicken from the legendary chef Judy Rodgers — but you do need a hot one, and a day or so to dry-brine the bird before using it If you don't have the time to dry-brine, don't You'll still end up with...

I don’t dispute the results. I’m just trying to develop some intuition of how it works. The process I imagine is: the kosher salt sits on the skin, it draws moisture out of the flesh, through the skin, dissolves in that moisture, then the moisture goes back through the skin again, back into the flesh, leaving the skin dry. I just don’t get how the skin stays dry, why is the flesh more absorbent of salty moisture then the skin?

I don’t know the science. But a few years ago on CH I asked, if anyone had cooked the Zuni chicken, had cooked a better chicken. No one had. ???

I just put my salted chicken leg and thigh in the CI skillet . I get them home from the butcher and salt them well . And let sit on the counter for around a hour . Cook skin side down until crispy and turn . They come out great with crispy skin . I do this all the time now .

Will be seasoning (including salt) a bunch of chicken wings in a few minutes and letting them sit on a wire cooling rack in the fridge for 8 hrs to dry the surface, then into the convection oven.

I’m late to the debate…

Having read the OP and the cited links, I’ve been running some tests with grilling and pan-searing. For a couple weeks now, I’ve been salting half the cuts well in advance (like at least an hour), and salting the other half just as they go in/onto cooking.

I have been surprised that I can discern no difference in result–either taste or texture–with steaks and chops.

Now then, I do find a difference in texture if the cut is coated in olive oil along with the salt and left to sit before drying and cooking. I think the acids in the oil somehow open up the cell structure and allow the salt and any aromatics to penetrate the cut better. Just my theory.

I believe Serious Eats experimented with this and found that if you salt it ahead of time it should be a minimum of 45 min or an hour or longer, otherwise, do it immediately before cooking. I think it’s advice for steaks, specifically: http://www.seriouseats.com/2015/05/food-lab-how-to-grill-steak-cuts-of-steak-marbling-salting-charcoal-technique-resting-tips.html

He says 40 minutes at the latest if not dry aging with salt for one to four days.

The only salt I use (if I use any) is after cooking. I like to feel as if I’m truly eating that cow and get the true flavor of the beef. There are times and places for seasoning, but I prefer to dip the meat if I want a different flavor.