Regarding the American style of serving meat, veg and starch on the same plate, does anyone remember these divided plates? 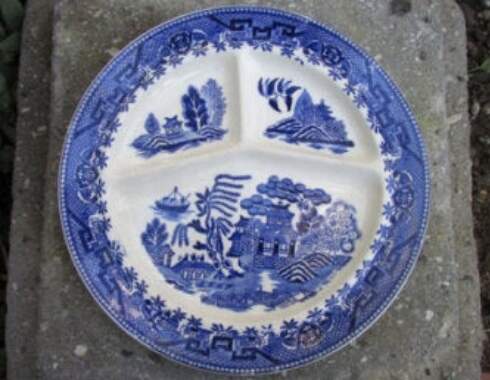 I remember this divided plate rather well!! 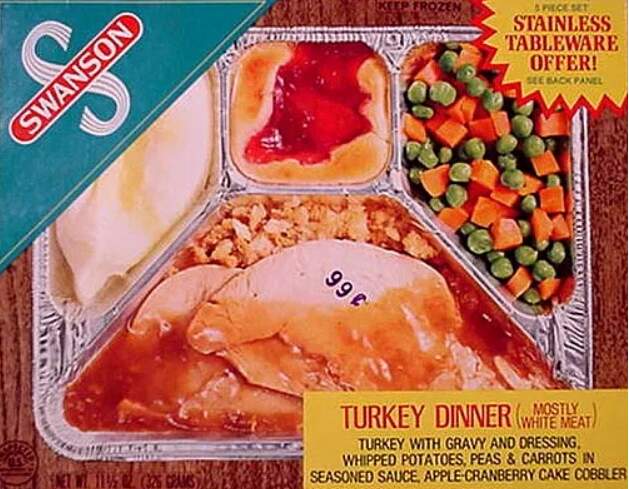 I wonder what my diabetes nurse would make of the divided plate. She’d probably think it a very good idea but I bet her approval might change depending on what element of the dish went in the large section. Her advice for my plate is 25% protein, 25% carb, 50% vegetable. I rarely hit the target.

I use a divided plastic bento box for my doggie bag when I travel. It was handy in Japan. Saved my leftovers for snacks later.

I also have been known to keep some clean plastic bags or silicon bags in my purse, for things I don’t finish. Better than wrapping leftovers in napkins

Amen. For years I have carried zip-loc sandwich bags when we eat out. I can never finish the quantity protein served, and feel it’s insensitive to return excellent food to the kitchen.

I wanted to vailidate the comments I’d made earlier about the similarities in presentation of restaurant meals between America and the two European countries I know best (UK and Spain). So, I’ve had a read of recentish meals I’ve eaten in the three countries and I link to the HO reviews I wrote below. These three places are all mid-range neighbourhood bistro type restaurants. And, yes, I’ve validated my comments - these meals are presented in very similar ways, IMO. There’s lightish starters, followed by a main course plate generally involving protein, carb and veg and a dessert (something we often don’t order). No cultural difference of significance - probably just as you’d expect.

The Lime Tree has always been a particularly hospitable restaurant and we were a bit concerned some of that might have been lost with the post-lockdown restrictions. We needn’t have worried. Essentially, things were no different. Yes, there were changes. A couple fewer tables to allow for social distancing. Staff wearing masks or visors – they seemed to have this right with the two staff who had most engagement with customers wearing the more “people friendly” visors. Menus now in a plastic hold…

Until the last couple of years, it was a bit of a rarity if you heard a voice that wasn’t Spanish in Las Lanzas. It was very much a local place for local people but, increasingly, other tourists have discovered it. The shortish menu remains unchanged – basically fish and steak fried in various ways without too much cheffing about with the food. They serve some of the best croquettes we know in Spain. A thickish béchamel sauce binding ham or, in this case, prawns before forming it into balls, br…

Back in the 1980s, when we first started to visit America, finding good food was difficult. You’d have checked in to your hotel and only knew of the restaurants you could see or had driven past. You never got to know of the great little places, just round the corner, that the locals raved about. The internet now means there’s no excuse if you have a poor dinner. Whilst the likes of Tripadvisor can be helpful, I still turn to foody discussion forums to find the real gems. Which is how we came to …

Amen. For years I have carried zip-loc sandwich bags when we eat out. I can never finish the quantity protein served, and feel it’s insensitive to return excellent food to the kitchen

My mom couldn’t make it to a special tasting menu at a restaurant, which had at least 8 small courses, a couple years ago. I went in her place, and brought home half of every course in two bento box containers

Just curious, the restaurant couldn’t pack the food for you? Or it’s due to embarrassment?

It happened to me that I couldn’t finish a dish, I sometimes asked for a doggy bag. It’s usually it was a plastic or paper box. Once, I slipped the chocolate madeleine in the cafe gourmand in a paper napkin and off in my handbag in a more fancy place. I have also asked for a cork if we couldn’t finish our wine, the alcohol limit is getting stricter over the years for drivers.

This was our MO in France where taking food away from a restaurant was frowned upon until very recently. Only a couple of years ago it was made law that restaurants had to provide packaging for diners’ leftover food. Previous thinking was that care had been given toward preparing good food that should be consumed as presented. i.e., why would anyone want to eat stale, reheated food? So rather than create a scene, I would simply drop 4 oz of uneaten steak into a ziplock. Sometimes it became breakfast or lunch, sometimes shared with an interested dog, sometimes just dumped. But never sent back to a kitchen as unwanted.
I got quite proficient. DH would look across the table and exclaim, “Wow! You really wolfed the rest of your meat!”, never having noticed my “snatch and drop” .

But I’ve to say when asking them to pack the food, some places packed only approximatively, not really everything.

Again, probably only sending home what they thought worth while and leaving small bits they considered “crumbs”.

Yeah, and when that thing they left out was the sauce, actually the best part!

Veering off topic but perhaps valuable, one reason I started doing this was that DH would finish my plate. After a few days of this, he’d balk at going out to a nice dinner, complaining that he couldn’t eat these “huge dinners” night after night. I couldn’t get across that he had been eating a dinner and a half, especially since he routinely ate my unwanted dessert. So in order to enjoy the maximum vacation, I started zip-locking the egregious portions.

I remember ordering fried potatoes that I could not eat somewhere in Europe. Could have been BCN. I asked to take them with me and the waiter looked at me as if he confused. He explained that they would not taste good when I got them home. I don’t recall what happened after that, but I can certainly recall the look on his face.

I remember this divided plate rather well!!

I would eat that right now minus the dessert. I haven’t had one of those things in at least 35 years.

It is in the Constitution …

It may not be mandatory now, however, it is a tradition and restaurant tables are reserved for the menu del dia in most neighbourhoods throughout the country.

Paella is normally prepared on Thursdays and Sundays - and is served at bars as a tapa on Sundays.

Yes, the main course is always a protein: 1 beef, 1 pork, 1 chicken and 1 fish and / or shellfish … In fancier establishments; baby lamb as well …

Starters could be: a rice dish, a pasta dish, a salad or a bean dish or a vegetable dish …

Dessert or café or tea …

Bread or Wine or a beverage are included.

Thank you for the interesting read. I recall my parents and grandparents telling some of this information when I went to study in the Madrid Capital many years ago.

Is this a serving for one or two ?

Big amount of broccoli and brussel sprouts and the plate is very very tiny !

Serving for one. Me!

Just curious, the restaurant couldn’t pack the food for you? Or it’s due to embarrassment?

With the tasting menu I brought home, the meal cost quite a bit, over $120 USD per person, and it was a small resto in my hometown, with maybe 16 seats, which were full.

Basically a chef cooking everything, and his wife was the Front of House. It was easier for me to pack it away myself, and saved them labour.

In a place like NYC, I ask for a doggie bag.

If I’m visiting a country where I don’t speak the language, I’d rather be gauche and pack it myself, maybe when the server isn’t looking, than cause a server any stress or draw attention to myself by asking for a doggie bag. 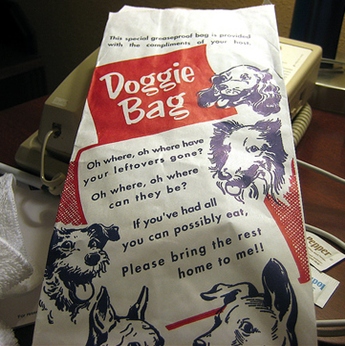 What is the Origin of the Doggie Bag?

Have you ever been slightly embarrassed by asking for a doggie bag in a restaurant? Well, you shouldn't be, really. Is it your fault if the establishment serves food in ridiculous proportions? And is it not proper that you do not wish to waste food?...

An excerpt that might serve to make this seem on topic;

“The doggie bag is not usually done in other countries and many foreign visitors to the U.S. seem to think this practice is somewhat appalling. It is hard to know just why but it is at least partially due to distaste for the wasteful over-large portions often served in America. To be fair, if the first doggie bags were really meant for leftover bones to be given the family pet, a prudent step in scarce times, then such distaste should be reserved for what the doggie bag has become, rather than what it was meant to be. Also, it is ironic that most of the world looks on Americans as wasteful and then beats us up when we show a bit of frugality!”