This is my go to recipe for pizza sauce although I don’t bother with the onion and sub 1/2 tsp of dried basil for the fresh stems. I know its enough for 3 of my pan pizzas so I freeze leftovers accordingly. If you need small amounts at a time, I’d freeze in an ice cube tray then pop into a freezer bag. 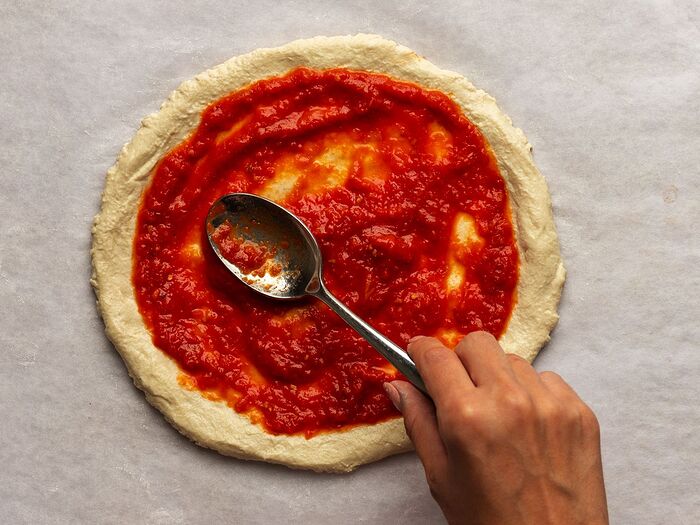 No need to go in search of a slice joint. You can make a New York-style pizza at home any time you want, starting with this faithful and perfectly calibrated recipe for the sauce.

Just like with pasta sauce, the only brand I use to sub for homemade is Rao’s.

And the really nice thing about Rao’s pizza sauce is, unlike their pasta sauces, it’s not 3X more expensive than regular “ok” stuff like Bertolli. Maybe 1.5X, but not 3. And given the small volume, it’s not a big hit as an absolute value. I also like Mids pizza sauce. Similar comment as with Rao’s - the pasta sauce from Mids costs multiple vs. Bertolli, but their pizza sauce is actually very close in price. Of these 2, I like Rao’s better but my kids like Mids better, and my wife is just happy that I cook for her. [Edit - and I should add that I’m just fine with Bertolli pizza sauce, too, so I guess I’m not too discriminating]

For home made, I’ve been copying from Brian Lagerstrom (timestamp set to when he does the sauce - also note the ingredients and amounts are listed below the dough recipe in the description). I like it and it’s very quick and easy.

If I don’t have homemade marinara in the freezer then I’ll use either the Cento pizza sauce in a can. I’ve used Rao’s too but didn’t notice much of a difference except for the increase in price.

I’ve never heard of Mid’s.
They don’t care for the west, it seems.

From their locator it looks like every Schnucks, Kroger, Dierberg’s in STL carries it and then some small towns farther West, but it looks like it cuts off about 60 miles East of Columbia (I think I recall you’re around KCMO area).

Mid is short for Mideo Octavio, the son of Sicilian immigrants who started an Italian restaurant ~ 1940 featuring his Grandma’s sauce recipe and eventually started bottling it at the request of his patrons, then started selling it.

To me it’s fine, but not distinct enough to justify the higher price so I only get it on BOGO (which is often enough). One of their advertising points is that it’s nice and thick and sticks to pasta well. It is thicker than Rao’s or Bertolli or what not. Can’t figure out why, though - no gum or the like in the ingredients.

nice thing about Rao’s pizza sauce is, unlike their pasta sauces, it’s not 3X more expensive than regular “ok” stuff… 1.5X, but not 3"

I went by the pasta aisle to check my memory on this and alas, this is no longer quite true. Rao’s is now 2.5X more than the Bertolli etc. mass market stuff.

I’m from KC. Now living in the people’s republic of Oregon
in the hippiest town of Ashland.
Home of Will Shakespeare’s

Sclafani ate by far the best tomatoes. Of course they ARE Jersey tomatoes.

We make our own sauce. For pizza we add some sugar & rosemary.