Where do you find good pho, crappy pho in the Bay Area? Since we can’t be in Vietnam all the time, where’s the best pho? Little Saigon* you say? Not all of them can be winning. Let’s hear them all- northern, southern, beef, chicken, SF, International Blvd, Story Road…

*Or whatever people want to call it, but let’s not go there… 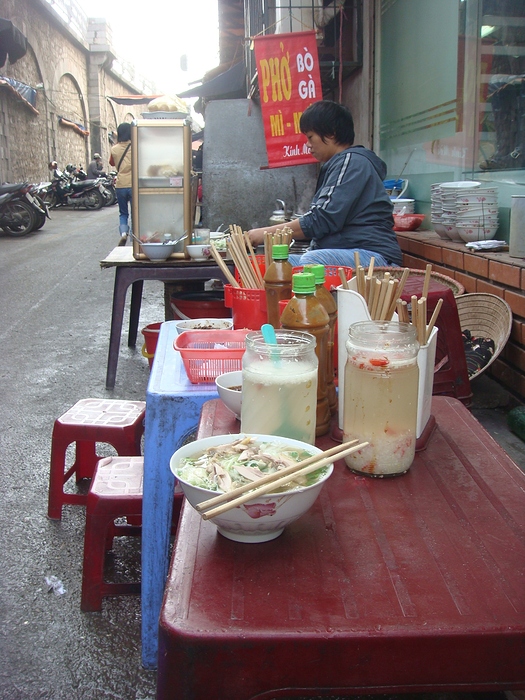 I will start. Pho Dong in Redwood City (on the same street as Kemuri and I Dumpling).

Surprisingly nice for the stretch of peninsula not exactly known for Vietnamese food. Noodle had springy texture, and was quite al dente for pho. No MSG in the broth that I can tell from the lack of massive water consumption afterwards. Good mix of fatty and tendon-y stuff. Its not going to win Best of the Bay awards but its closer to home than San Jose.

One complaint: the jalapeno was seriously weak. Threw the whole plate in there and its still barely hot.

Add $1.5 for extra noodle on the side. They divided their pho menu into 2 sections- first time enjoying pho (all the lean cuts), and those who want to enjoy traditional pho (the fatty and the innards)

I like the branches of Pho Huynh Hiep (Kevin’s Noodle House). I pretty much only get pho tai.

Crappy, you say? That would be Pho Dong Huong on Monterey Blvd. in SF. They transformed from a truly wretched/actively gross dim sum place to a completely mediocre pho place. That’s an improvement, right? Their bowl of pho is quite bland.

I’ve never found anything here to rival Than Brothers in Seattle.

That’s a picture I took from Wikipedia. The caption over there says that its a typical street stall in Hanoi.

@shanghaikid’s comments on a few other pho joints in San Jose linked here for reference:

A successful meal at Pho Cong Ly in San Jose near SJSU based on endorsement from @shanghaikid
(TY!)

So we obliged and got:

The broth was intense and fragrant. Loved the fatty, gelatinous meat and beef part. The lean meat was the least exciting relatively. The oxtail could use a few more hours of simmering though. 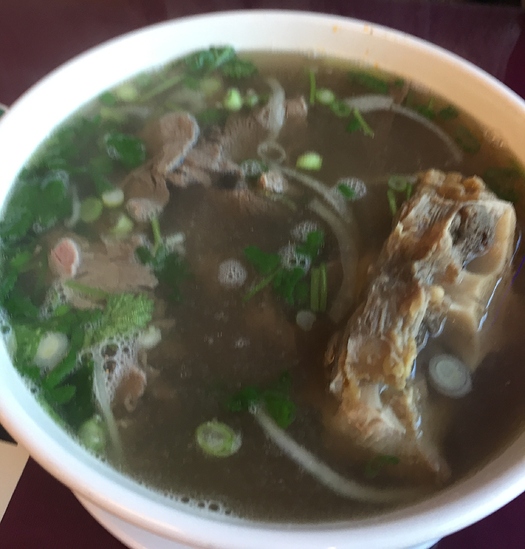 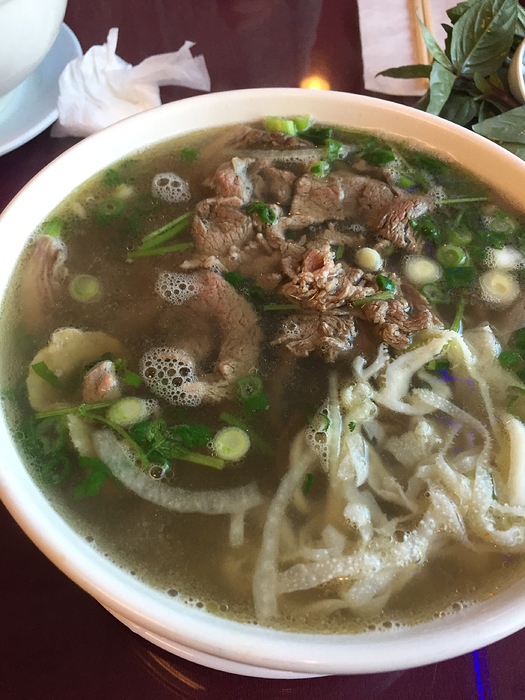 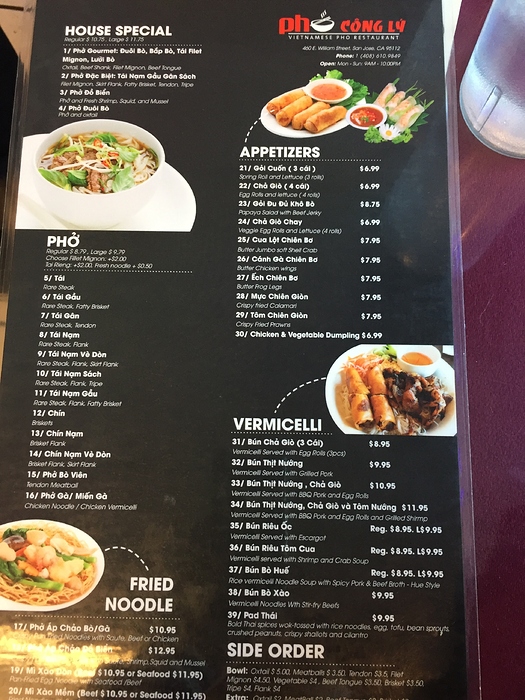 pho wasn’t a priority in the south bay, just looking for dishes missing in east bay:

I usually get my pho ga fix from Turtle Tower on Larkin St. in SF. I usually go there a few times a month and get the #9, which is the pho ga without giblets, usually in large size. I’m not a big fan of giblets. I have tried recently to branch out by trying Joy Hing BBQ Noodle’s pho ga in SF Chinatown a couple times.

Joy Hing’s version of pho ga (I got the #1, large) is somewhat similar to Turtle Tower’s style. Flat rice noodles, chicken, and cilantro, with the addition of sliced red onions. Both are served with sliced raw jalapenos and a wedge of lemon or lime. I liked Joy Hing’s pho ga. I felt it wasn’t quite as good as Turtle Tower’s though. Less noodles and less chicken, although the chicken was cooked well and was quite moist with skin on. I ran out of chicken quite a bit before finishing the noodles. Broth was similar, maybe an edge to Turtle Tower as Joy Hing’s was maybe a little thinner. Joy Hing’s version comes with a side of ginger scallion sauce which was good for dipping the chicken into. 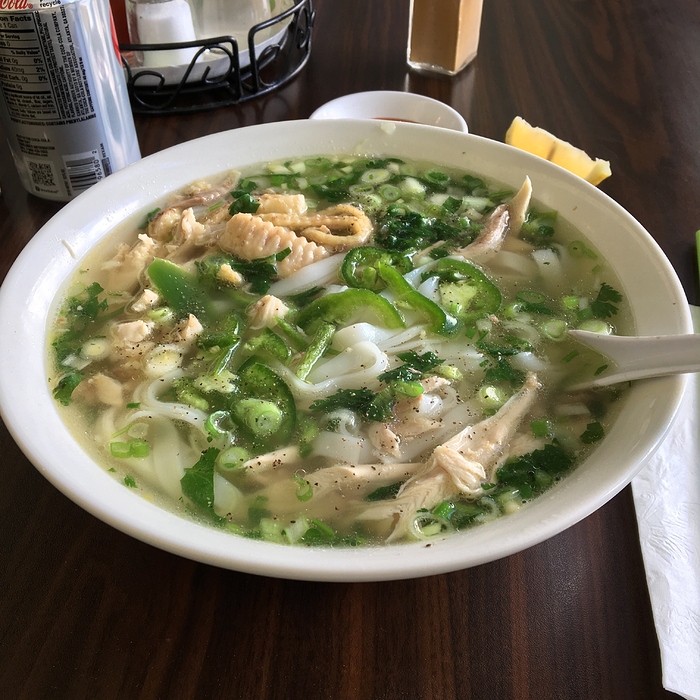 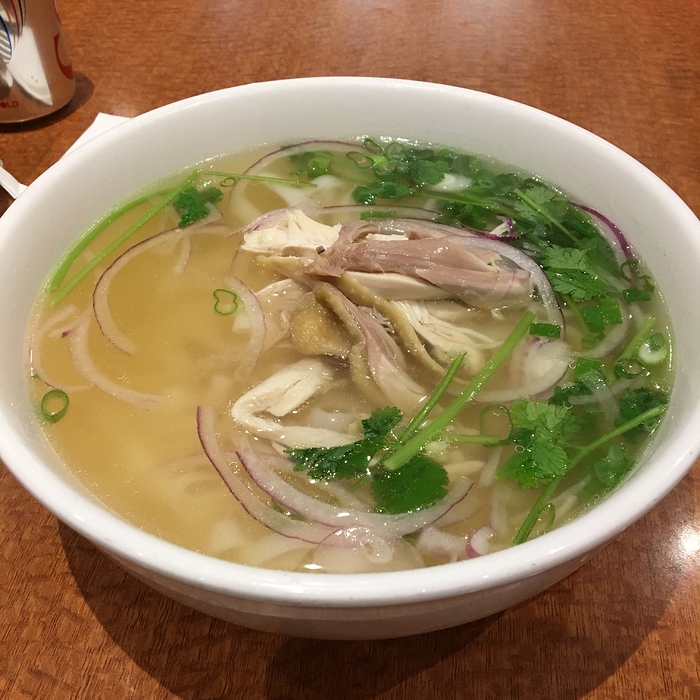 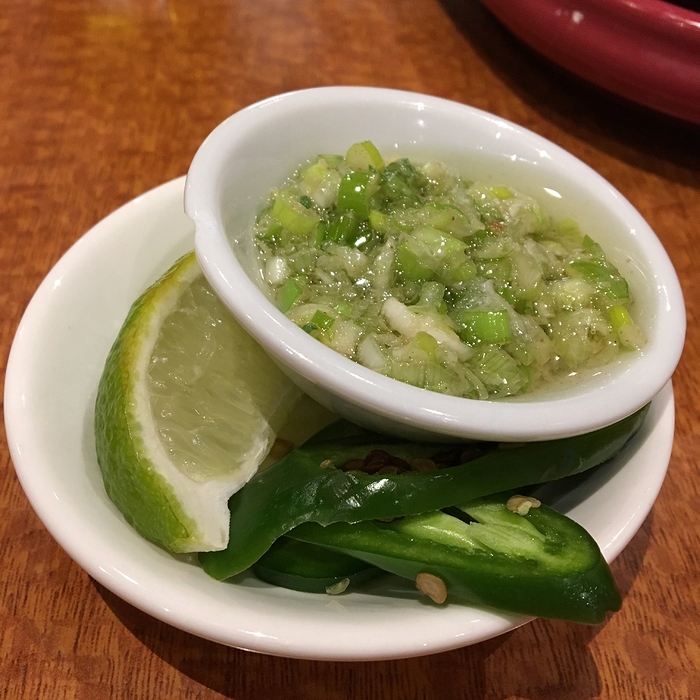 Pho Avenue, Mountain View, across the street from Whole Foods on El Camino.

Pho Dac Biet. With beef balls, steak, flank, tendon, tripe, briskets. Should have remembered asking for the steak on the side as it got overcooked in the hot broth. A bottle of fish sauce was available in addition to the herbs, chili sauce, Sriracha, etc. Overall, the bowl was not bad. A bit ahead of Pho Vi Hoa at San Antonio. Broth had no MSG, and got some good flavor. The beef balls were ok but I’d prefer more tripes, and briskets. 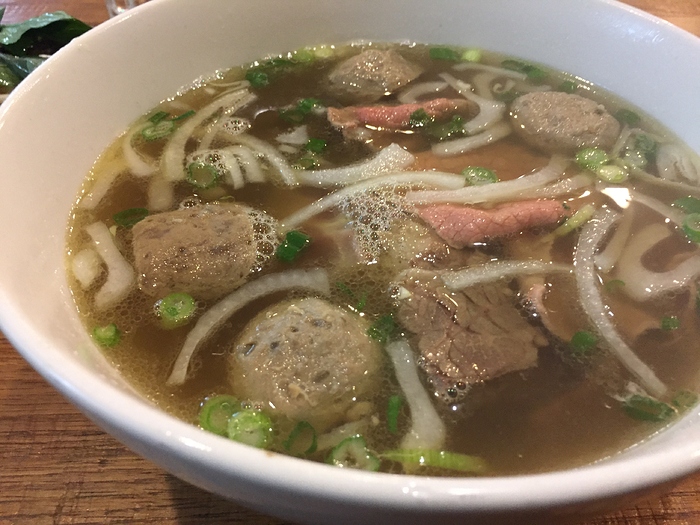 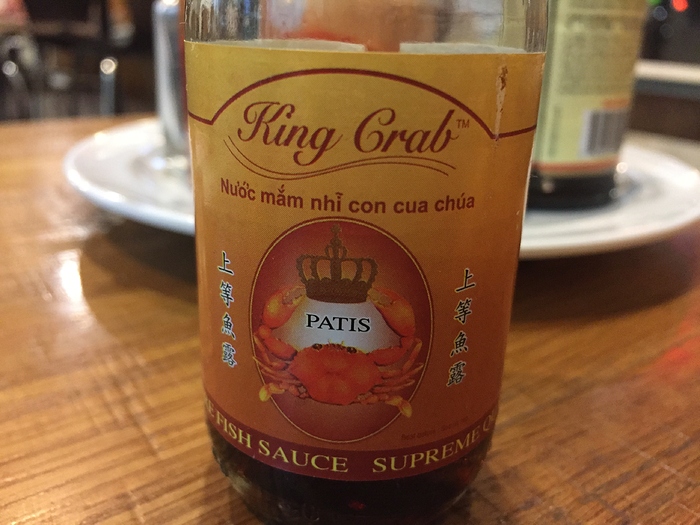 Acceptable broth and meat. Their buan cuon was more interesting though. They did offer culantro. Got beef balls in the soup. 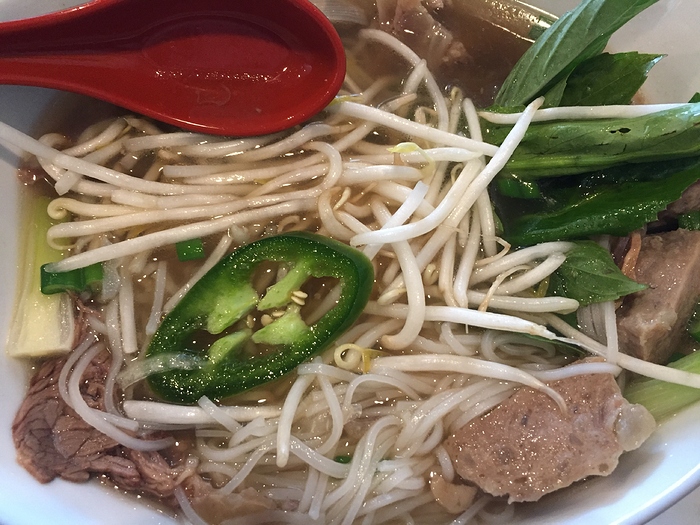 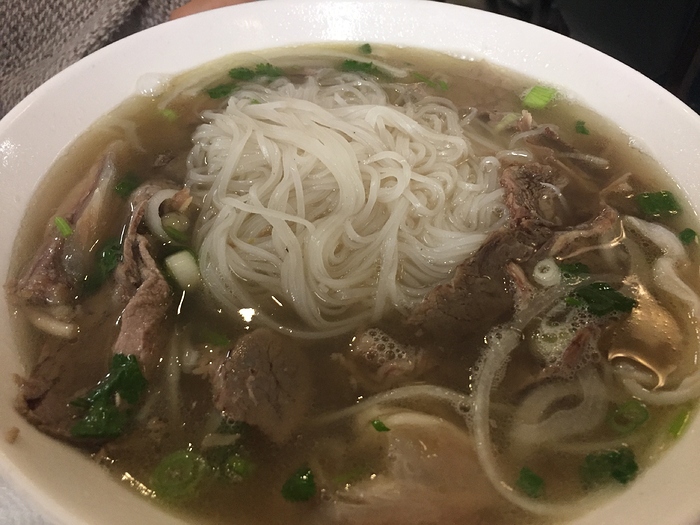 My favorite beef pho is at Kim Huong in Oakland. They also have my favorite bun bo hue.

Favorite chicken pho is at Turtle Tower, with giblets. I make a fish sauce-lime- jalapeño sauce on the side and dip the chicken in it.

There is now a second branch of Cong Ly at the corner of Jackson/ McKee in San Jose.

Thanks for the recommendation! I’ll have to check it out on my way to I Dumpling!

My first visit to Pho Dong off Broadway in Redwood City! Here’s my vegetarian perspective…

Here’s what I had: 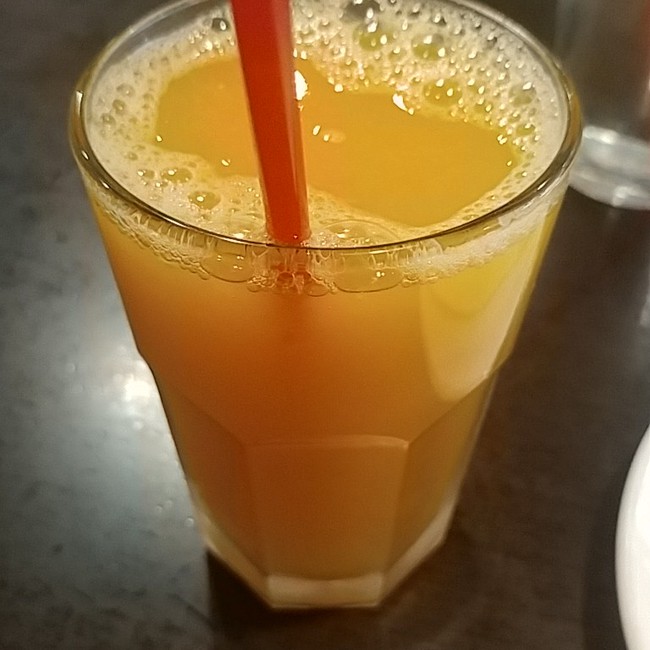 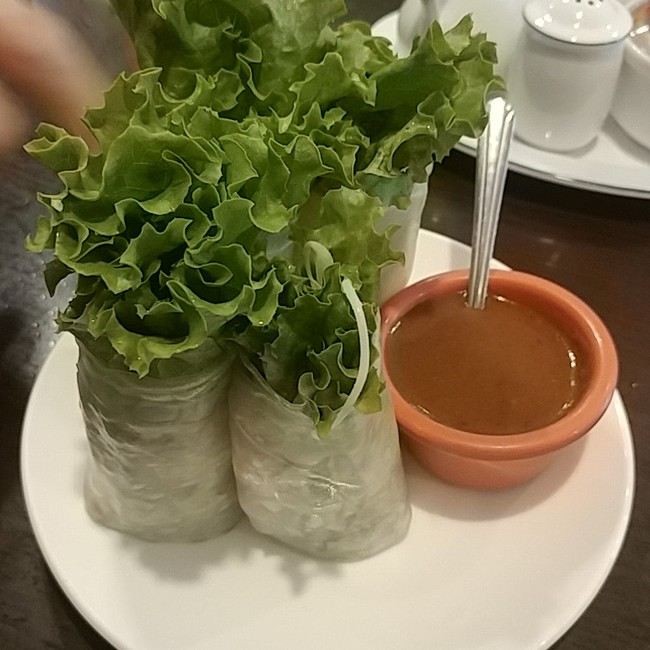 Not the best vegetarian spring rolls. The wrapper was soaked for too long, so it lost its springy chew. Sauce was good though. I still like Merit’s spring rolls best. 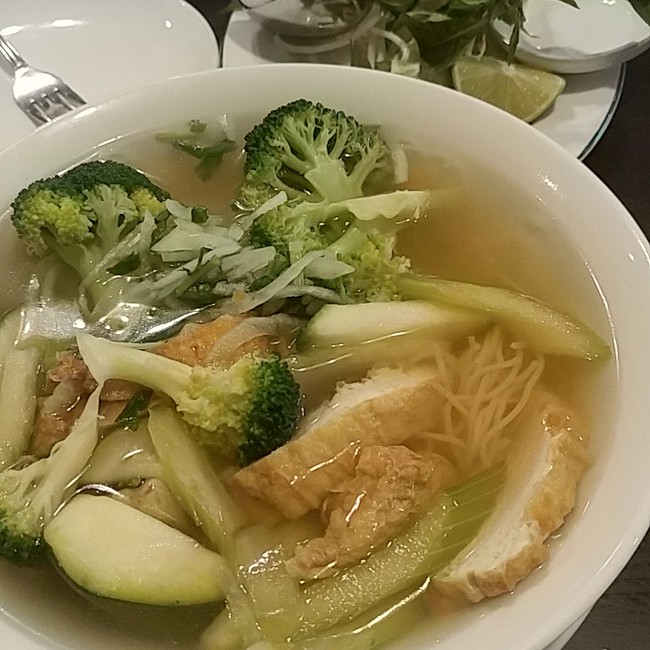 Well executed vegetarian pho. They know how to cook noodles properly, which is essential. They even did half rice noodle and half egg noodle in a single bowl for us! Great service. Tasted great, didn’t seem like there was MSG either. I find the broccoli a little distracting. For some reason, I associate broccoli with Western food, so it seemed misplaced, but other than that, I was happy with this bowl. 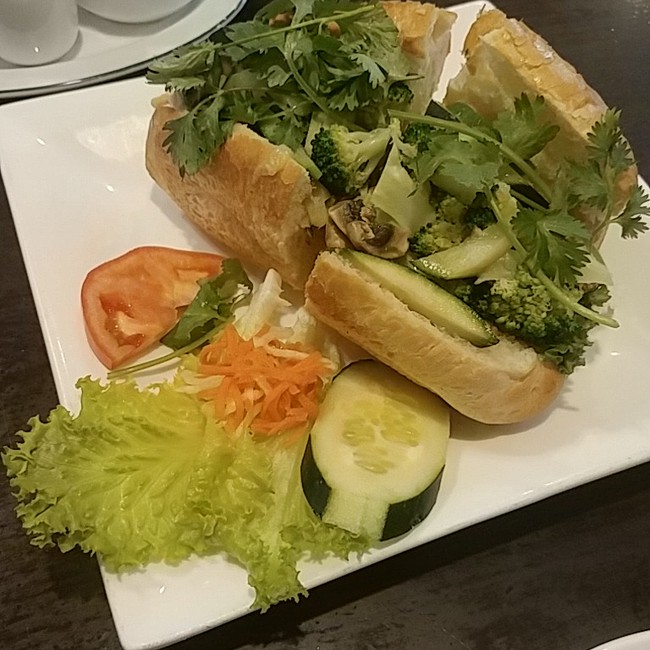 It’s rare to find vegetarian banh mi sandwiches (to my knowledge, I’d like to be proved wrong…

), so I was super excited about this. Again, like the pho, well done. The one thing is the broccoli, which I just don’t understand. I would’ve liked to seen more tofu and maybe some more flavor in the tofu. Still good though. 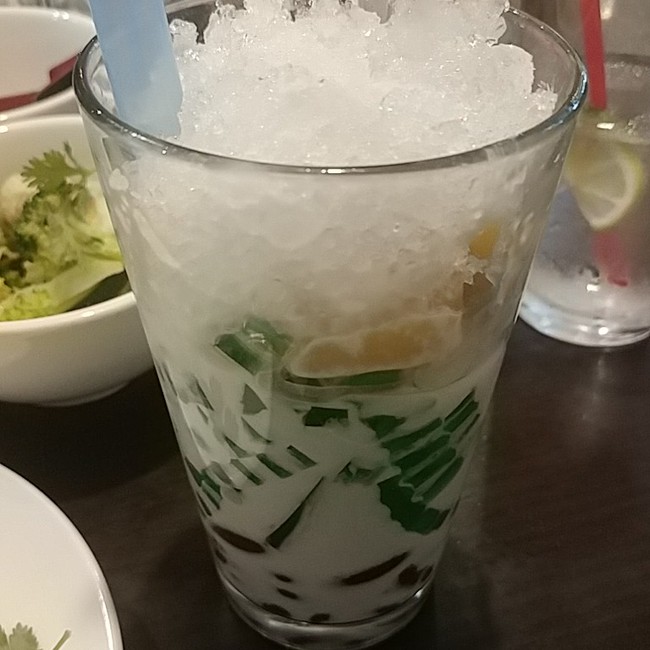 Finally, to top off this meal, I got my favorite dessert, che ba mau. Didn’t disappoint!

My husband and I had a great experience here and would definitely recommend trying.

Have a tasty time!

Good to know! Thanks for recommending those banh mi shops! I’ll have to check them out sometime!

A worthy bowl of pho ga from Pho Ga Nha. 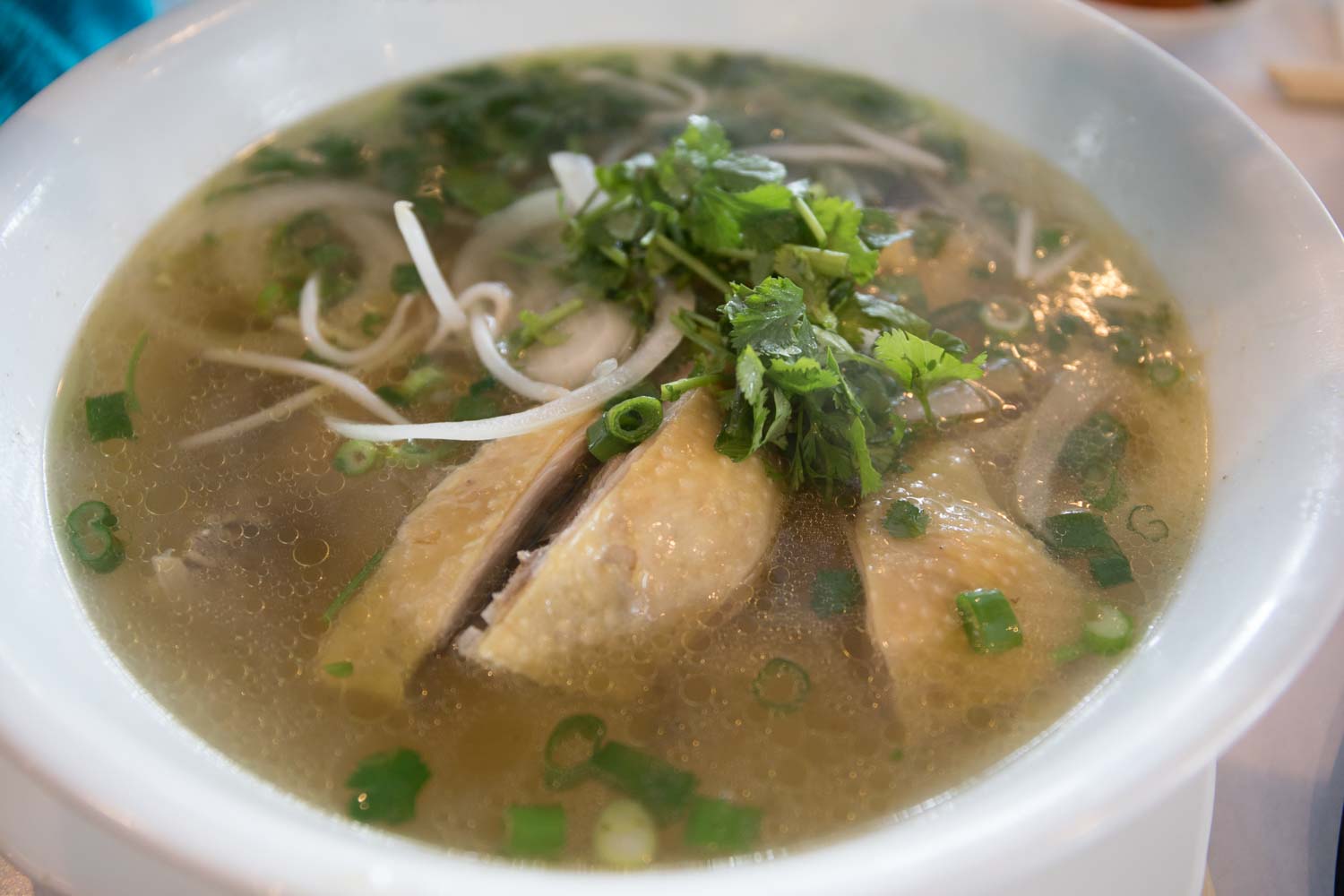 These guys are serious about their chicken. First, take a look around their restaurant. [image][image][image] [_D3A7169] While waiting for a table for late weekend lunch, I asked a regular for ordering advice. Specifically, I asked what else I should order besides the chicken pho, and whether I should order the duck congee. She said no, skip the duck, and get the hainan chicken rice with sticky rice instead. That’s persuasive enough, so I stuck to her advice, mostly. The pho. That bro…