Kerala’s coconut-enriched cuisine has always been one of the tastiest among India’s rich collection of regional cooking styles.

In George Town, where South Indian cuisine is often dominated by either Tamil-Hindu/vegetarian or Tamil-Muslim cooking, Shobana’s Kitchen offers a tasty alternative with its Keralan dishes. 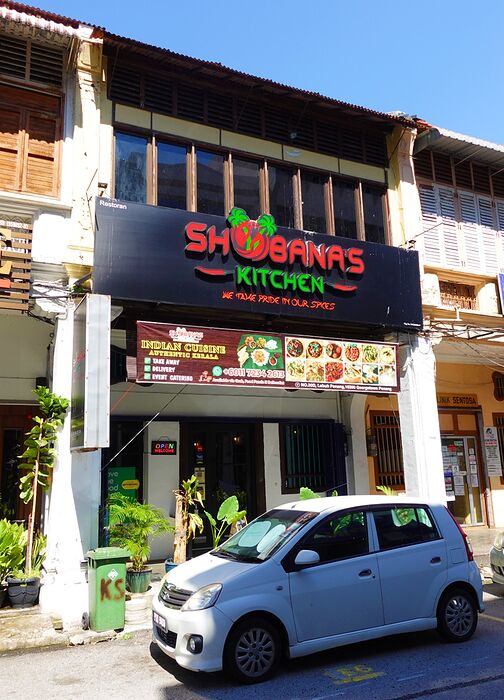 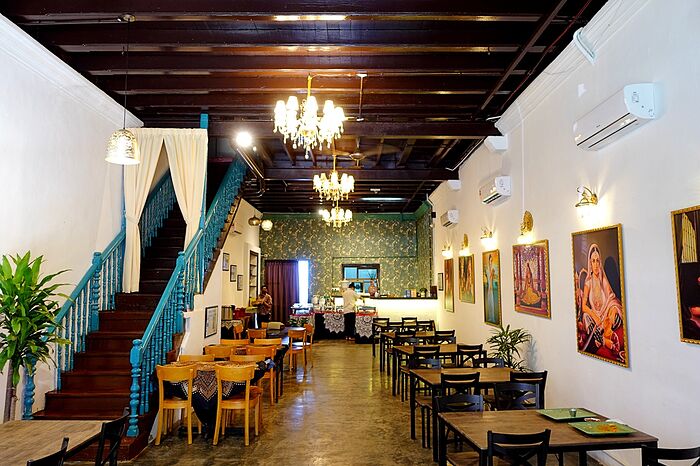 We were there for lunch today, over-ate (!) and were absolutely stuffed to the gills by the time we left: 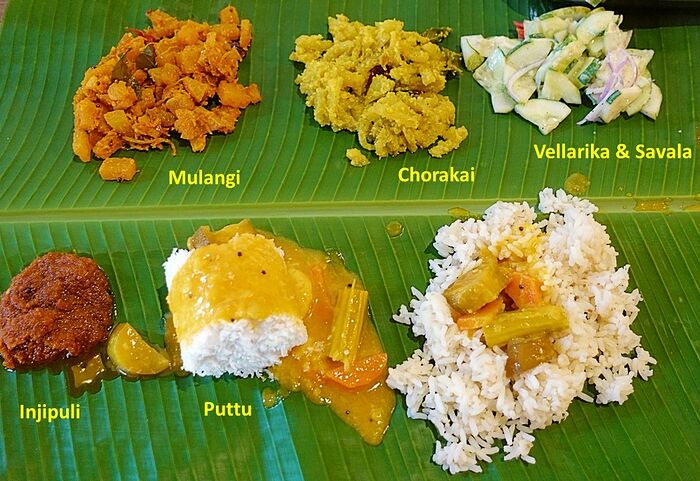 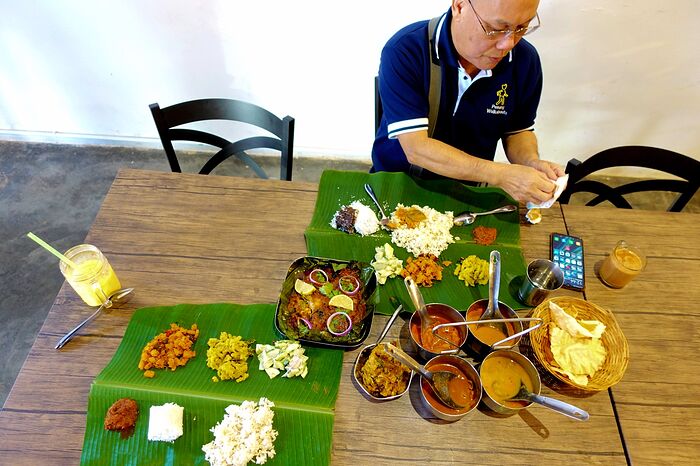 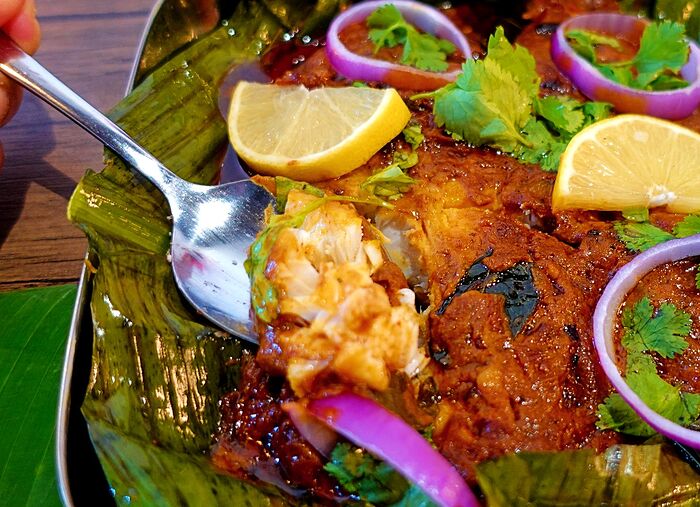 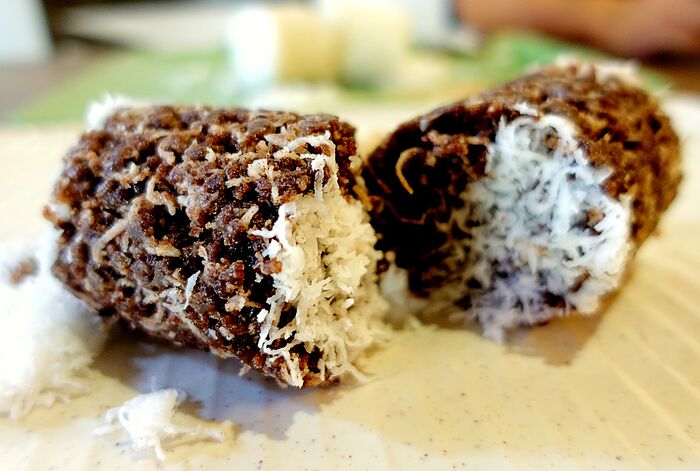 In this region, the Malayalees of Kerala, just like the Tamils of Tamil Nadu, the Telugus of Andhra Pradesh, Bengalis, Gujeratis and Punjabis, have been in Malaysia and Singapore for at least two centuries, as colonial British Malaya was closely associated with the British Raj. Their cuisines in Penang, as elsewhere here, have intermeshed with each other, and evolved, whilst retaining some of their defining characteristics.

So, the Keralan food here at Shobana’s Kitchen seemed to have strong Tamil influences, as Tamils are traditionally the majority among the Indian diaspora in Malaysia (85% of Indians) and Singapore (58% of Indians).

Our hostess, the restaurant manager Shoba, was incredibly genial & friendly. We are already planning a return visit soon, to explore more dishes on their menu. 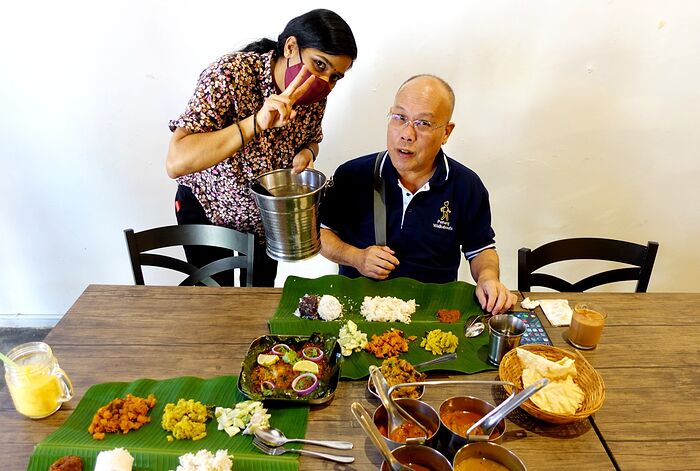 And I went back to Shobana’s Kitchen again today for lunch - this time because a good friend who saw my earlier post insisted that I come along for an encore. 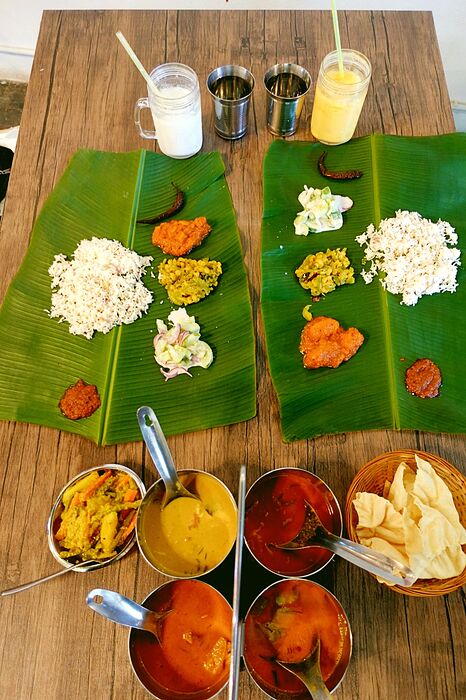 Unbelievable. But I’m glad I did - for two reasons:

The restaurant looked noticeably busier today because of the festival. 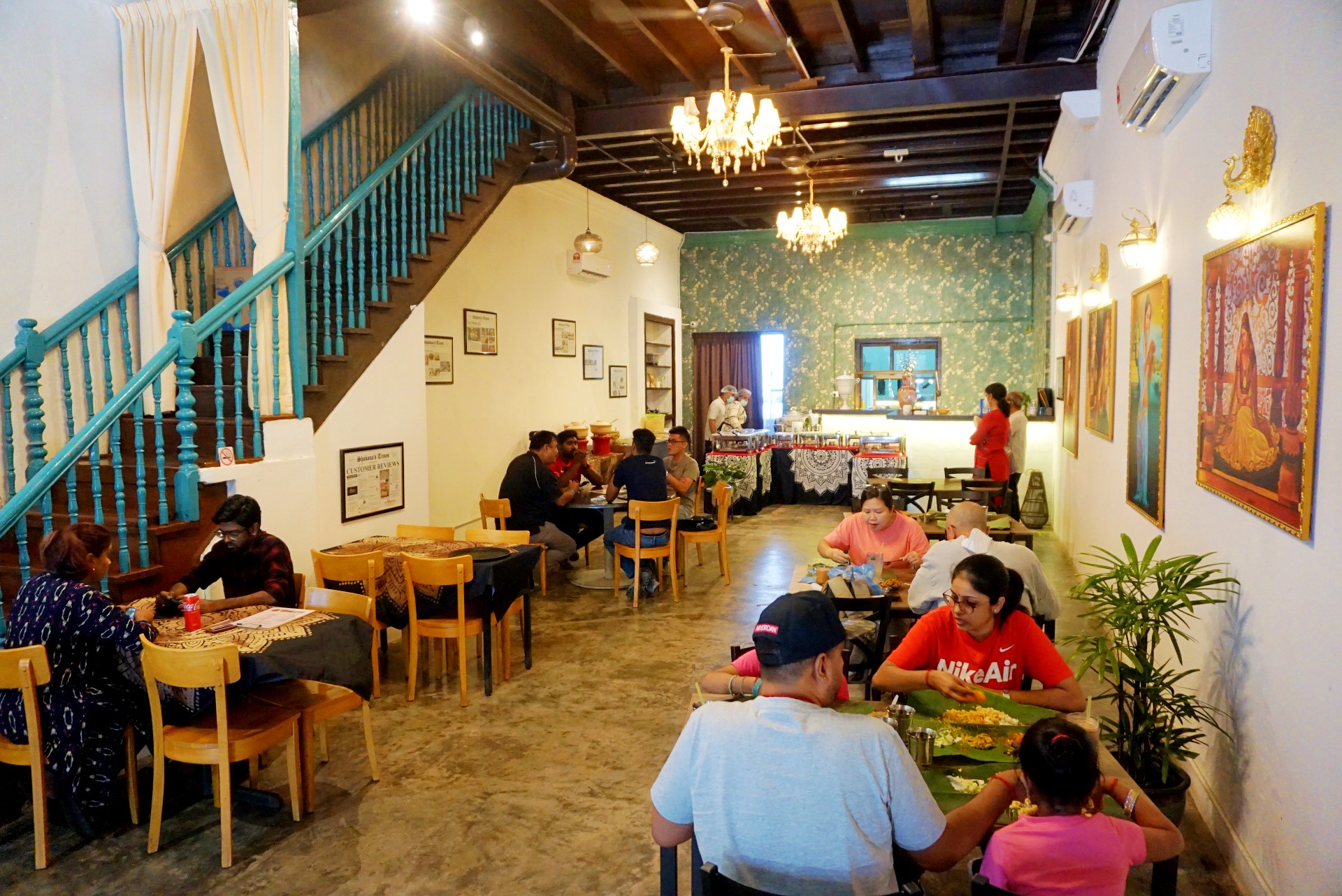 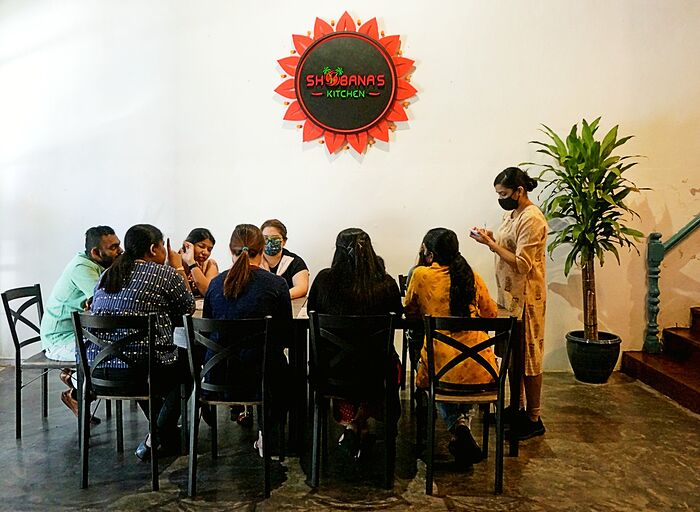 Eating rice and curries off a banana leaf has to be done sans any cutlery - one has to use one’s hand, and only the right hand. 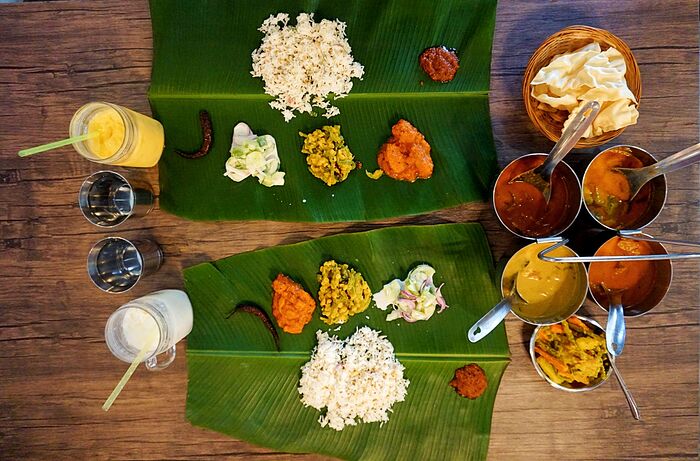 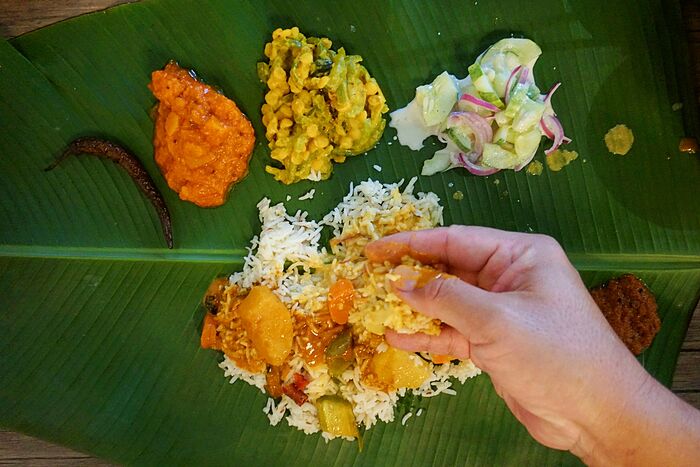 Thanks for that report. If I ever make it back to Penang, this will be my first meal.
Here in Chiang Mai we finally got our first Keralan restaurant a few months ago. It has a more limited menu than yours but we do get cutlery.

You should try eating Indian or Thai with your hand, Jeff, if you haven’t already!

I’ve eaten Indian food with my hand in India but as a westerner was almost always offered a fork and spoon too. Eating with your hand in Thailand (other than sticky rice) is no more acceptable than in Japan or the US. Some customs don’t travel well.

This report is so incredible and reminds me its been too long since I explored all the restaurants in Ft. Bend County, just across the county line from me, that cater to a seemingly sizable ex-pat community from Kerala in the Houston area. There are two grocery stores and churches, too.

I love the fish curry which I had at a couple of places, then found a mix at one of the grocery stores and made it at home. Absolutely one of my most favorite dishes from the Subcontinent. I loved the palappam, buttermilk curry, kappa and so many things, the thoran and avial, a duck curry 2 times and Keralan biryani with it’s raisins and cashews.

I visited at one Onam Sadya and we ate off (faux) banana leaves with our hands. I didn’t do as well as others around me but I didn’t starve. At a Sri Lankan place I also ate a feast off real banana leaves that was wonderful.

I definitely need to get back down there.

Thanks again for this report.

Thanks again for this report.

Most welcome. Looks like you do get some very good food options where you are!

Back to Shobana’s Kitchen for Sunday morning breakfast. We were the first customers there at 8am this morning, just as the restaurant opened its doors.

The genial Kochi-born chef, Madam Komala Devi, came out to chat with us as there were no other customers besides us yet. She’s quite a perfectionist in her cooking. 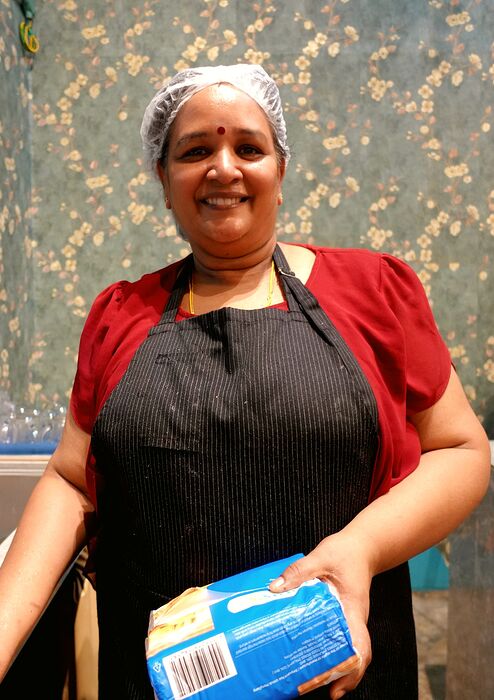 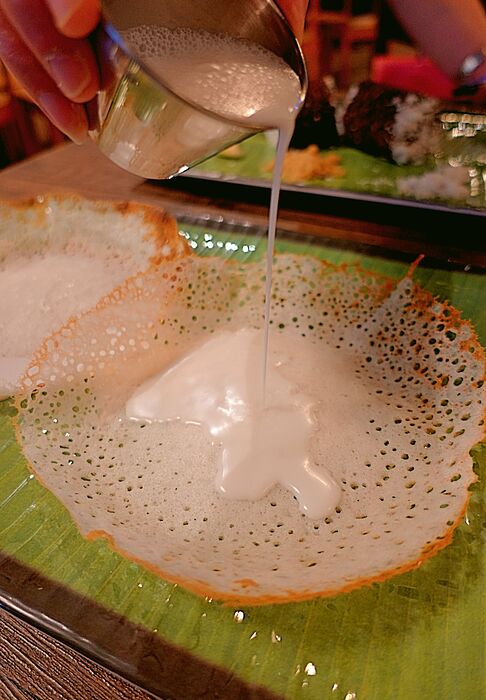 Another beautiful feast! I have to admit that the last two look like a perfect, decadent breakfast. Paal appam and a filtered coffee look like a phenomenal combo.
I just looked back a bit at some of your earlier posts, Peter, and I am dumbstruck by the variety and the beauty of the dishes that you have shared with us. I haven’t been to SE Asia for a couple years and I haven’t been to Penang for much longer than that, but these entries make me very, very wishful for the days of free and easy travel to return.
As I stroll through these cafes vicariously, one other thought has been coming to mind rather frequently of late. I would love to be able to buy a coffee table book with your thoughts about each of these cafes, to read the knowledge that you share about each of them and then to experience the beauty of the foods through your photography. I do not believe that I have ever seen a book of travel photography/dining appreciation that comes close to the artistry of your photos or the depth of your knowledge of the cuisine.
Your entries here on Hungry Onion are a treasure, Peter!

Thanks so much for your kind words. For me, these posts are merely sharing things I love doing, and places which I enjoy going to. I do wish you can come visit Penang one day.

I am still looking forward to international travel again!

I would love to be able to buy a coffee table book with your thoughts about each of these cafes, to read the knowledge that you share about each of them and then to experience the beauty of the foods through your photography.

That’s a great idea. I love looking at your photos and learning about the food and history of the area.