Had an Indonesian nasi padang lunch today with a couple of friends visiting from Surabaya, East Java, Indonesia.

It’s always difficult to find authentic Indonesian cooking in Malaysia, due to the close resemblance between Indonesian and Malaysian-Malay cooking styles.

Malaysia’s indigenous food is Malay cuisine, which share the same origins with quite a few regional Indonesian cuisines. However, due to its history, and the presence of significant Chinese (22% of the populace) and Indian (6%) communities, Malay cooking has absorbed and adapted some of those minorities’ cooking styles and food items, plus influences from neighbouring Thailand’s culinary tradition.

Over time, Malay cuisine diverged from its Sumateran and Javanese origins to become what it is today, although distinctive Indonesian influences can still be detected in various states of Malaysia: Minang cuisine in Negeri Sembilan and Selangor, North Sumateran/Medanese/Achehnese in Kedah, and Riau in Johore.

Recently, however, we kept hearing about 𝗥𝗲𝘀𝘁𝗼𝗿𝗮𝗻 𝗣𝘂𝘀𝗮𝗸𝗼 on Tamil Lane, next to George Town’s Chowrasta Market, from several expat Indonesians living and working here. They talked about the authentic Minang flavours from the restaurant. Minang cuisine, which originated from Sumatera, is perhaps the most popular regional cuisine amongst the many in Indonesia. 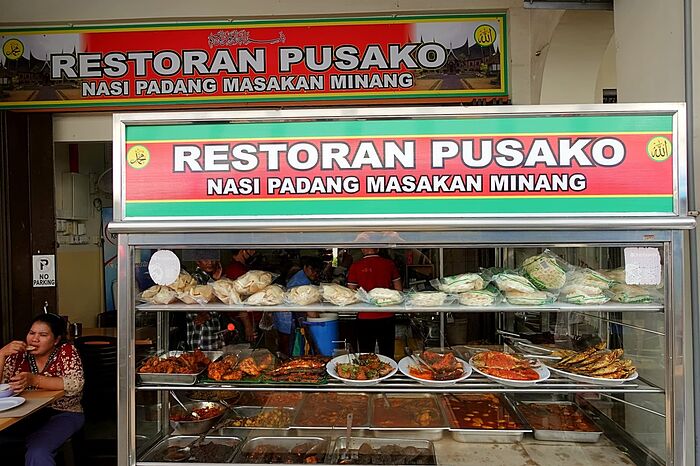 So, when I had two friends visiting from Surabaya a couple of days ago, I decided to
bring them there, barely 24 hours after they’d arrived in Penang, to see if Restoran Pusako’s food is as authentic as the Indon expats say. 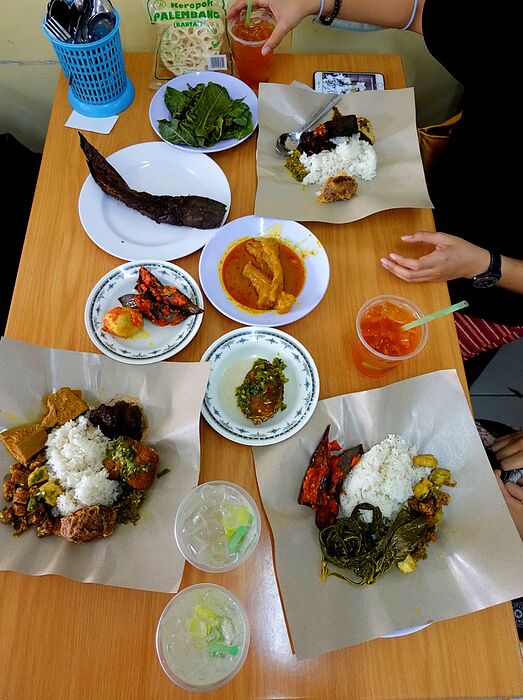 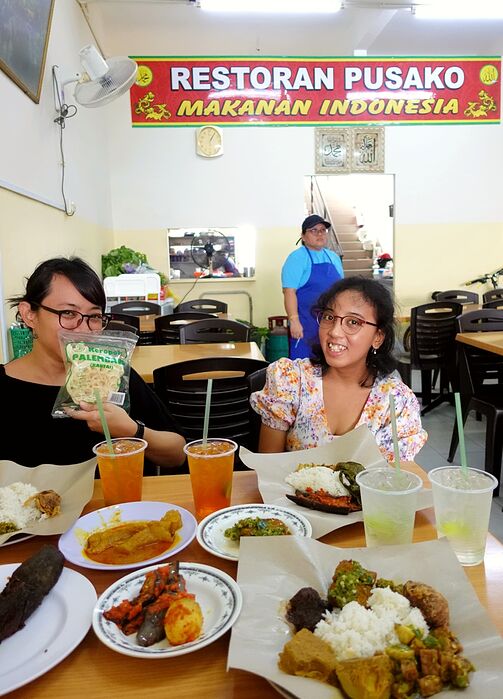 𝙍𝙚𝙣𝙙𝙖𝙣𝙜 - I found the “real” stuff here: fork-tender, dark-as-night beef, with red chili oil oozing out to form a puddle around it. 𝗧𝗵𝗶𝘀 was what I’d been looking for outside Indonesia, and rarely found. The one here was 100% the genuine thing. 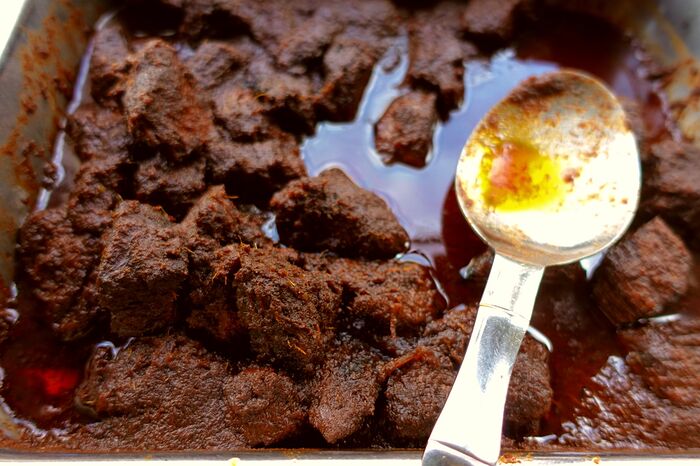 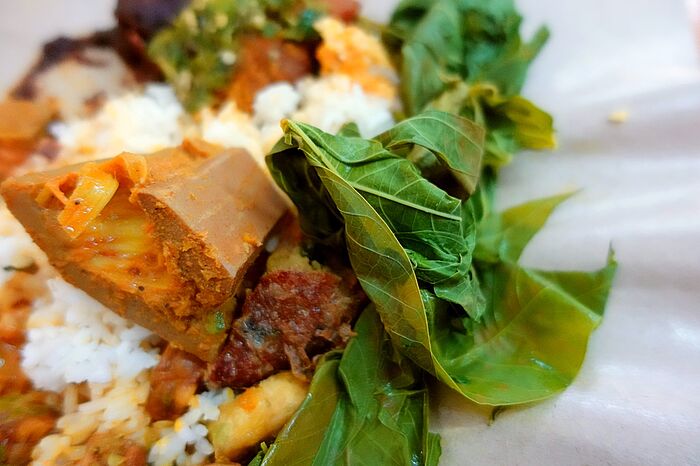 𝙋𝙚𝙘𝙚𝙡 𝙡𝙚𝙡𝙚 (pan-fried catfish) - the version served here was actually the best one I’d ever had: lightly crisped on the outside, but with the fish-meat just cooked and still juicy inside. 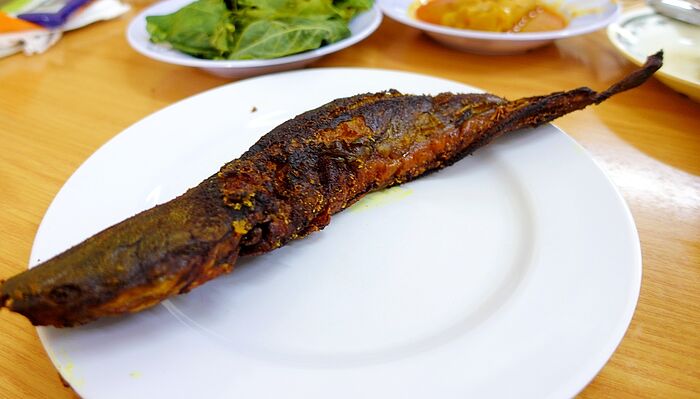 𝙂𝙪𝙡𝙖𝙞 𝙠𝙞𝙠𝙞𝙡 (curried beef tendon) - this was delicious: I’d come back here just for this dish. The gelatinous tendon was slow-cooked, Minang-style: which meant the use of a piquant, turmeric-inflected spice mix, and rich coconut milk which gave a curry sauce a creamy delicacy. Explosive tiny habanero chilis (Indonesian: cabe rawit) perked up the curry and undercut the coconut milk richness. 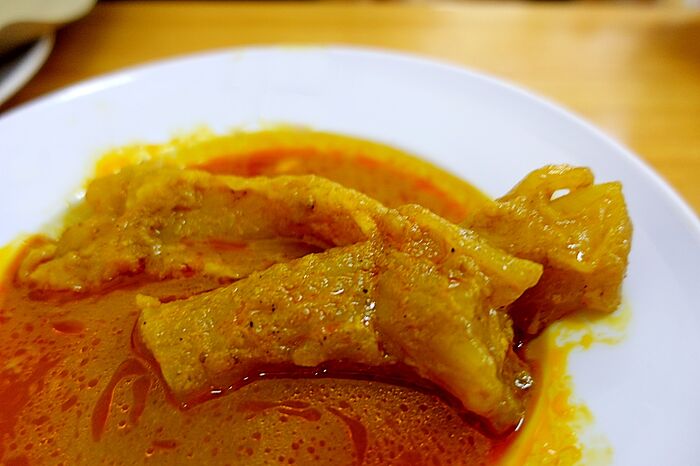 𝘿𝙖𝙪𝙣 𝙨𝙞𝙣𝙜𝙠𝙤𝙣𝙜 - cassava leaves, one of the must-haves for a Padang meal. 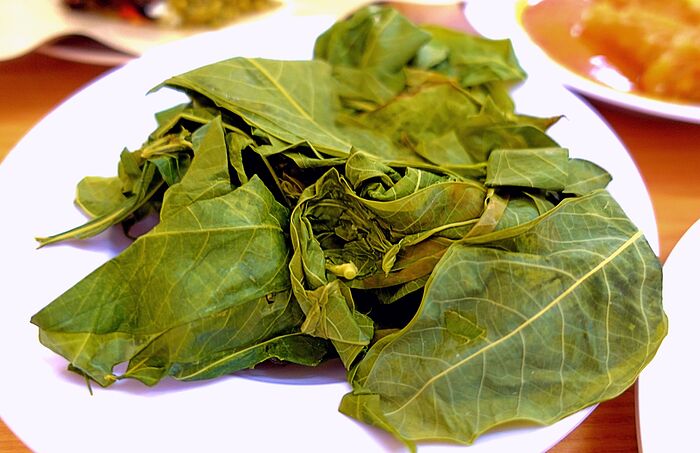 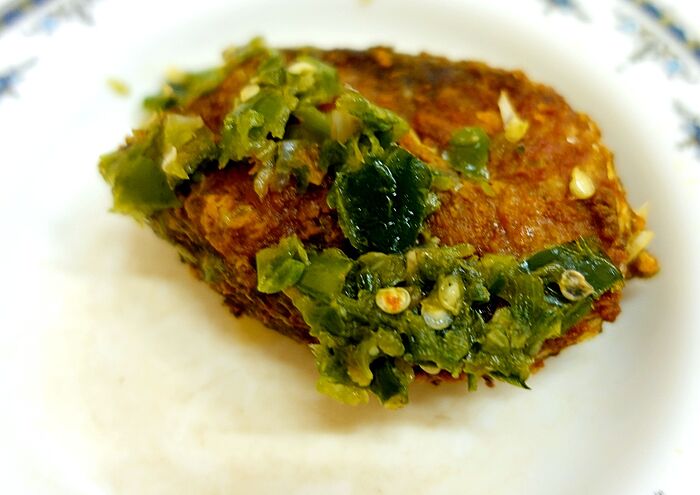 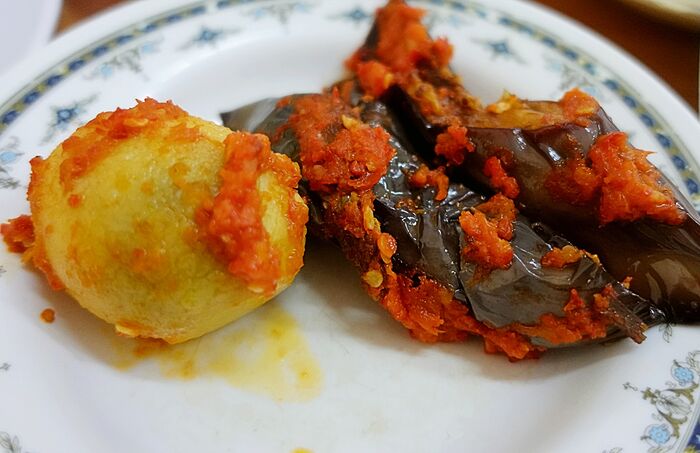 Unlike Singaporean-Malays or Malaysian-Malays who regarded fish, prawn or root vegetable crackers (Malay: 𝙠𝙚𝙧𝙤𝙥𝙤𝙠, Indonesian: 𝙠𝙧𝙪𝙥𝙪𝙠) as a snack, Indonesians would treat 𝙠𝙧𝙪𝙥𝙪𝙠 as a garnish, to be eaten together with rice or noodles during a meal. 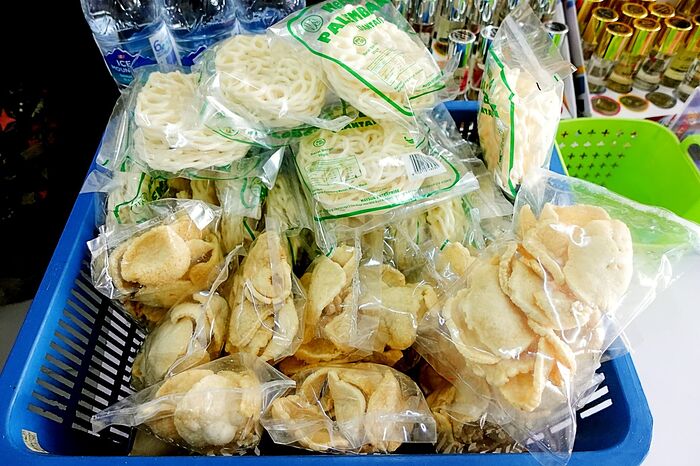 Left: 𝙎𝙖𝙢𝙗𝙖𝙡 𝙞𝙟𝙤 (green chili relish), a staple and must-have in any Padang meal.
Right: 𝙎𝙖𝙢𝙗𝙖𝙡 𝙢𝙚𝙧𝙖𝙝 (red chili relish), this one is invented to cater to the local Malay/Malaysian taste preferences. 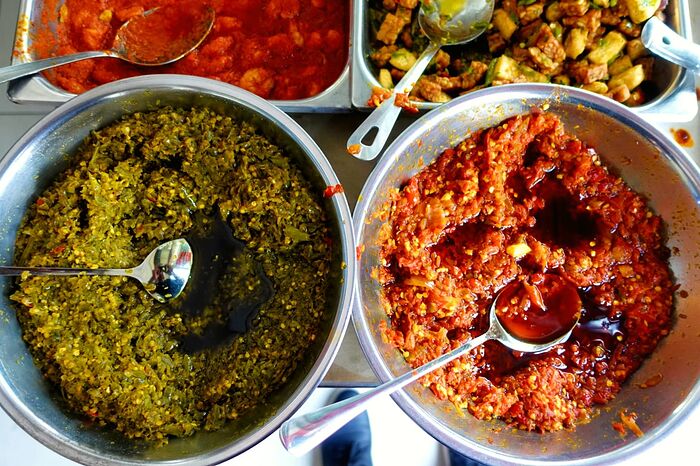 The owner-chef is from Padang, but her chief cook-server, Hery, happens to come from Malang, a favourite weekend destination (for food) amongst Surabayans, and located only 95 km (60 miles) from Surabaya. Serendipity! 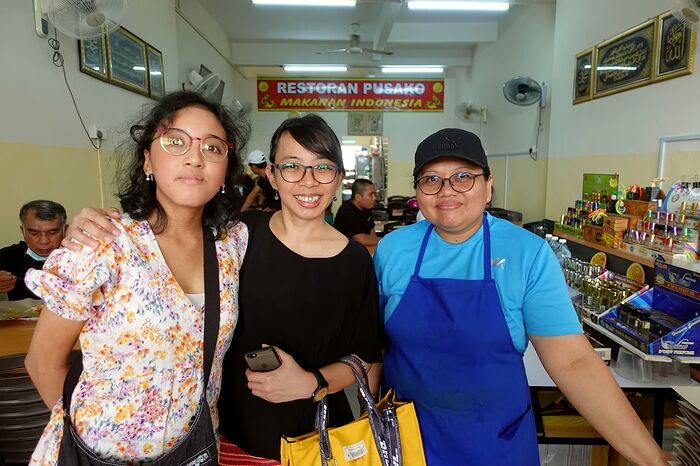 Modus operandi when eating in a nasi padang restaurant: 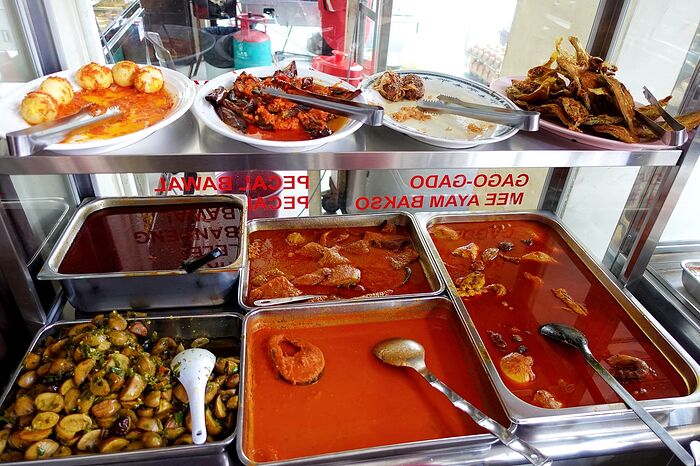 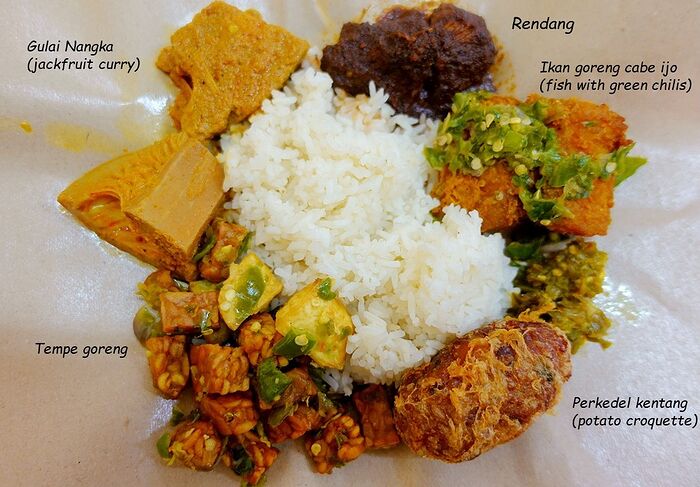 Looks like a great meal, and a great deal, Peter! I experienced that ordering system just once while I was in Indonesia this year and it was one of the better, less expensive locations I visited during my two weeks there.
I visited a Bangkok restaurant you recommended years ago, Kalpapruek, day before yesterday. Another very good meal there! I had an Esan Som Tom variant that was really good and a delicious green curry. I didn’t get too deep into the menu. The staff are still kind and welcoming to a non-Thai visitor! The funny part is that it was busy, again, and I had 2 or 3 of the staff escorting me to the door so that I would not bang my head on the low over-head. You could just see their relief when I got past the last low part of the ceiling. That has not changed a bit since the last time I was there!
Thank you for all your reviews! They are the best I have seen!

Please be aware how lucky you are to have all that wonderful food around you! Honestly, would rather eat here than at any 3 star michelin place in Paris…

I visited a Bangkok restaurant you recommended years ago, Kalpapruek, day before yesterday.

You are most welcome! Kalpapruek is a childhood favourite.
My maternal grandparents were Bangkokians - Teochew-Chinese, so the city holds precious memories for me.

I sat there for ten minutes just flipping through the menu, knowing that there was so much to enjoy there! I really enjoyed both dishes and the Som Tom really took me back to a version I enjoyed 30 years ago. It is funny how experiences, whether they are smells, tastes or sounds can take you back to an earlier time.

Please be aware how lucky you are to have all that wonderful food around you!

Oh yes, and I do hope you can come visit us one day soon.

Honestly, would rather eat here than at any 3 star michelin place in Paris…

I felt the same way, actually! Somehow, little places like this exude some much more warmth.

I remember you mentioning that a while back
I visited a coffee house in Bangkok’s China Town you recommended. Great iced coffee and toast! 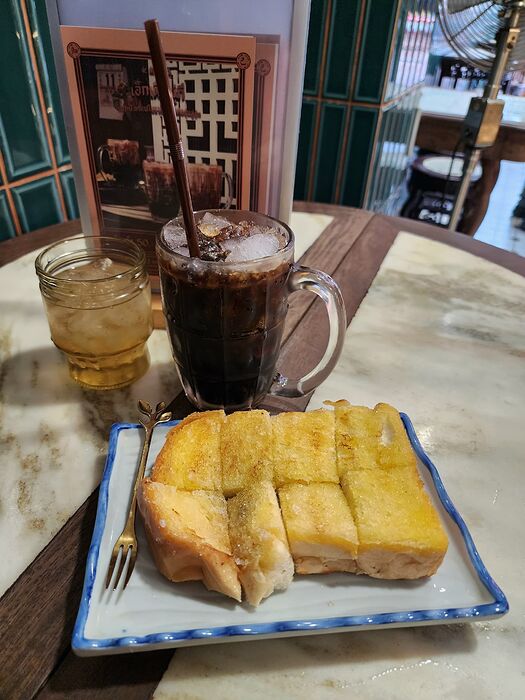 I stayed at the Atlanta Hotel this trip. What an experience! 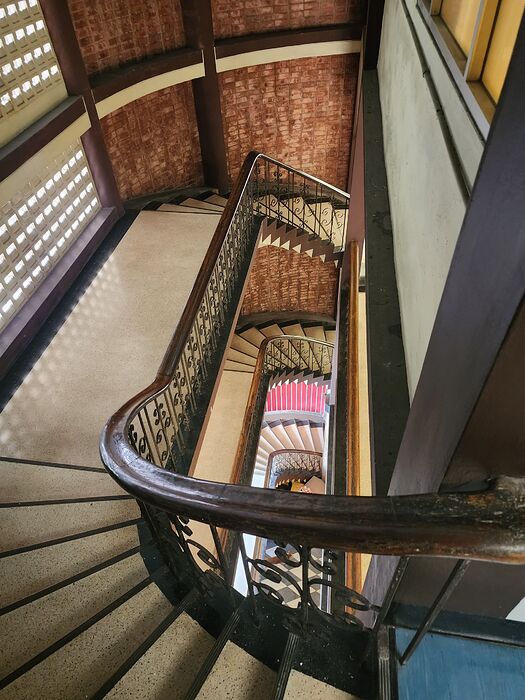 It is funny how experiences, whether they are smells, tastes or sounds can take you back to an earlier time.

Oh yes, taste memories! Sometimes, even a scent can bring back that a certain feeling of nostalgia.

Back to 𝗥𝗲𝘀𝘁𝗼𝗿𝗮𝗻 𝗣𝘂𝘀𝗮𝗸𝗼 at Chowrasta Market for the most authentic Padang food in Penang at lunch-time today. 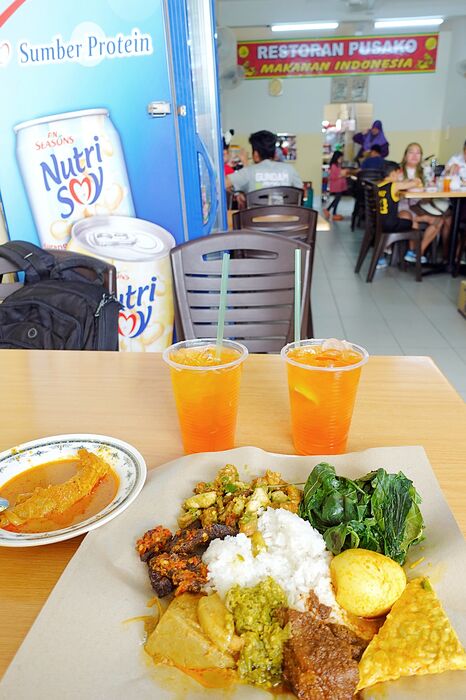 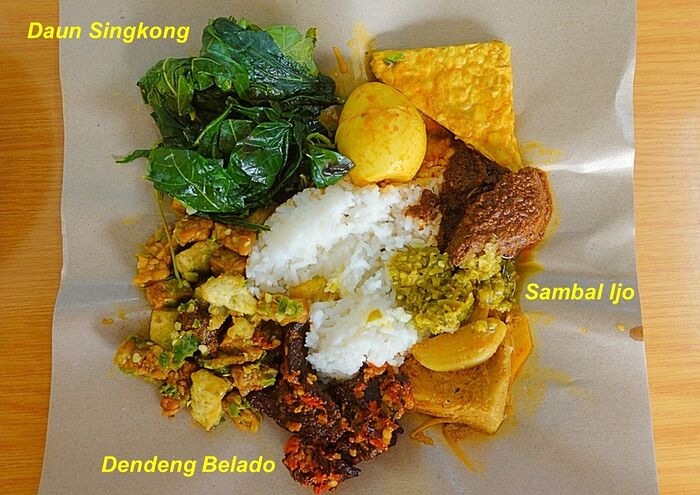 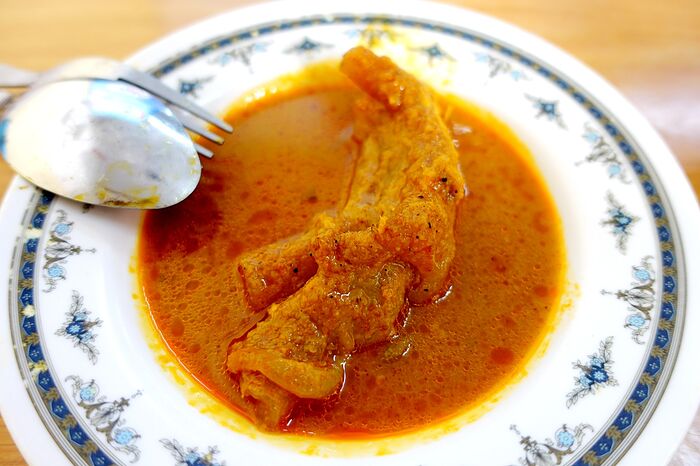 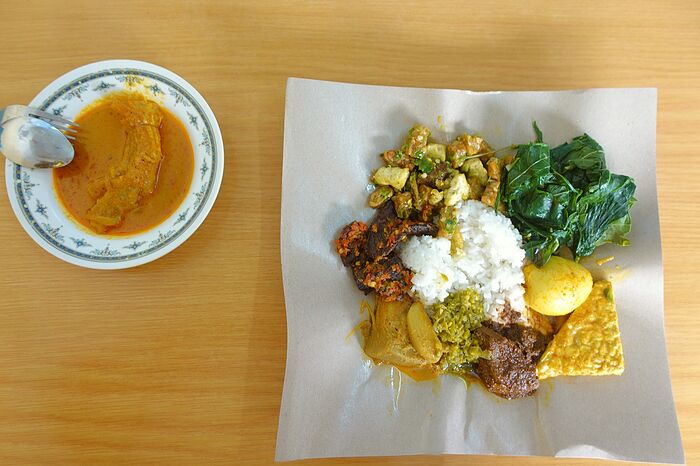 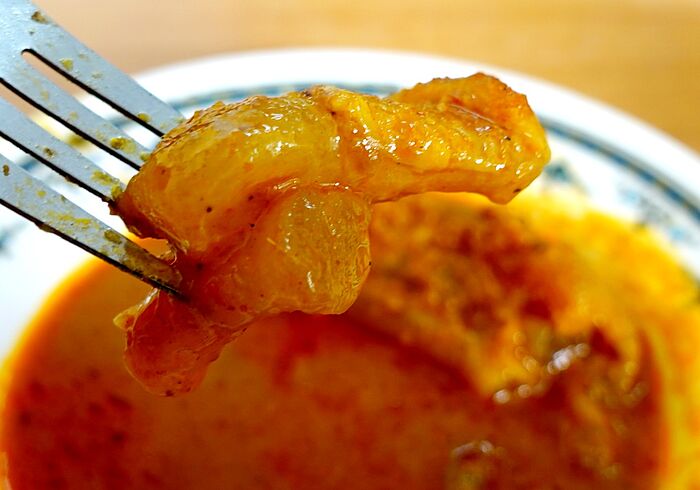 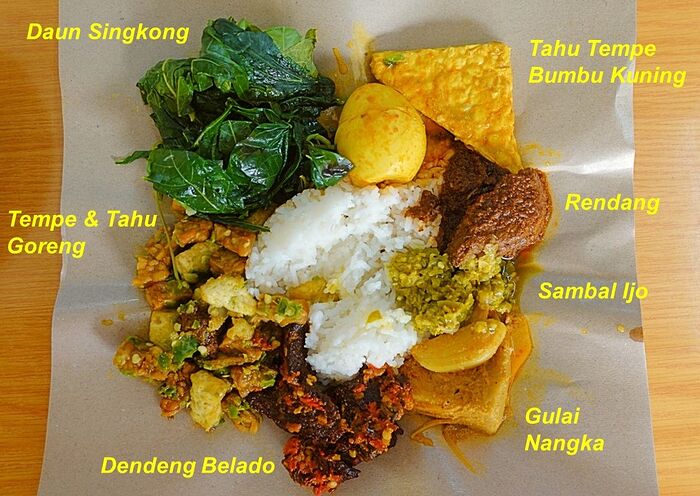 I love beef tendon. I remember going to a dim sum place in Bayswater , that did it and someone other than me suggested ordering it . I knew them very well and realised they weren’t quite sure what it was. I deliberately kept quiet. Sure enough it was declared too fatty by them and Mrs PB .so I had it all to myself . A bit naughty but no one would have agreed to it otherwise

If I had my way a lot more dishes should have 𝘥𝘦𝘯𝘥𝘦𝘯𝘨 𝘣𝘢𝘭𝘢𝘥𝘰 (crispy beef topped with red chili relish), as standard.

I deliberately kept quiet. Sure enough it was declared too fatty by them and Mrs PB .so I had it all to myself . A bit naughty but no one would have agreed to it otherwise

Naughty, naughty indeed. But I’d have done exactly the same.

Sometimes, even a scent can bring back that a certain feeling of nostalgia.

Hahaha, Proust smelled a cake and wrote his magnum opus remembering times past …

An inadvertent translingual pun. Chowrasta (or Chaurasta) in Hindi/Urdu means crossroads or where 4 roads meet. But chow in English is food, and so Chowrasta can mean a foodie crossroads destination, which seems to be the case here. I think it would make a great name for a pan-Asian restaurant focusing on foods of the crossroads of Asia.

Your food reports and pictures are magnificent, thank you for sharing with us. Long may you enjoy these in good health.

An inadvertent translingual pun. Chowrasta (or Chaurasta) in Hindi/Urdu means crossroads or where 4 roads meet. But chow in English is food, and so Chowrasta can mean a foodie crossroads destination, which seems to be the case here. I think it would make a great name for a pan-Asian restaurant focusing on foods of the crossroads of Asia.

Chowrasta Market, in the 19th-century, was more “Indian” than it is today - back then, Penang was The Fourth Presidency of India, and the governor of Penang reported directly to the Governor-General in Calcutta, India.

During that time, the spice ladies from Tenkasi and Kadayanallur (Tamil Nadu) were iconic features at the market. The Tamils came from the Coromandel Coast, whilst the Malayalees sailed forth from the Malabar Coast, to settle in George Town. At Chowrasta, there were communities of not just Tamils, Malayalees and Telugu, but also Bengalis, Gujeratis, Sindhis and Punjabis.

It was only in the early 20th-century that the market began to take on a more “Chinese” persona, as the Chinese emigrants started outnumbering others, and the Indians chose to move nearer to the busy and more bustling port area, where Penang’s Little India is today.

But there are still a few landmarks around Chowrasta Market, like the Sri Kunj Bihari Temple, which are reminders of the area’s old Indian heritage.