Paris (and London, Amsterdam, Bruges, and Brussels ) in September

If all goes as planned, we will be staying at
Reubens at the Palace in London
Pulitzer Amsterdam in Amsterdam
Grand Hotel Casselelbergh in Bruges (with day trip to Brussels and Ghent)
Hotel Brighton in France

2.5 weeks total, and several tours scheduled, food and otherwise, so not a lot of free time.

But here’s the thing; it will be a group of 5, one of whom is very difficult about trying new things. Last night, frustrated after having tried to plan dining for previous trips, I joked I would find him a Chik Fi Lay and an In and Out. He said okay, but I couldn’t find any. Finally I agreed to at least give it a shot in terms of finding some places we might all find something we might enjoy. He never wanted to travel beyond Atlanta, but indulges me.

Among us, son and DIL live in Turkey, and DIL lived in London and has friends there. Son has traveled in, and loves Amsterdam, especially cured fish. Daughter lives in NY and is probably open to anything, but would probably especially appreciate vegetarian.

I’ve been getting some great tips, including Robert et Louise from @SteveR , but it was suggested by @damiano that since there were “some excellent locals there giving great advice”, I start a separate thread on France/Paris board. We have been to Paris a time or two, and it was frustrating for me when it came to food .

So we are looking for very introductory, "tourist from California " friendly food, steak frites and roast chicken, always available, but maybe something more adventurous on the menu too.

In Paris, you’re not far from the Marais. I’d suggest Robert et Louise. Far from vegetarian, but they have fish/seafood, as well as a great assortment of grilled meats. 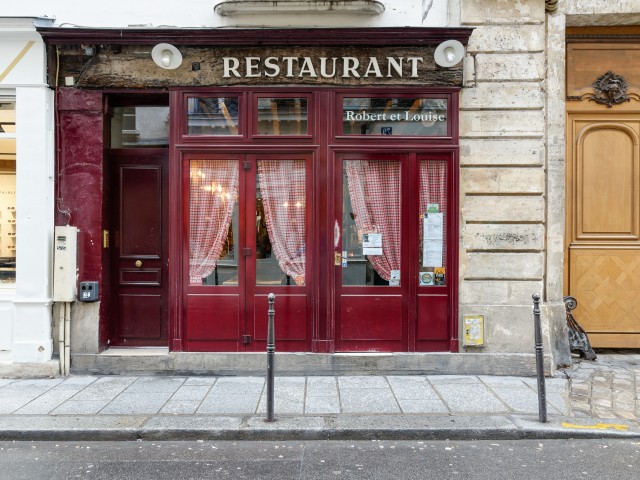 A post was merged into an existing topic: London, Amsterdam, Bruges, Brussels, Paris in September

In Paris, I am out of the loop, but we liked Brasserie Flottes for a Brasserie with decent food and some plain options. https://brasserieflottes.fr/en

In Amsterdam, again, out of the loop. The dishes I like when in Holland and when visiting Dutch restaurants- War fries (fries with peanut sauce, mayo, onions), bitterballen (meatballs), croquetten (beef filled croquettes), pfannkoekken (sp- giant crepes filled with savoury or sweet things). Their baked goods, especially apple things, are very good.

@shrinkrap Are you mainly looking for brasseries and traditional bistros? What is your budget? As far as I know your children are all adults. Do you mind traveling a bit or you want to stay to eat near your hotel?

If you have already plans for each day, it’s useful to let us know you will be in which district according to your daily visits to plan your meal accordingly.

you mainly looking for brasseries and traditional bistros?
I’ll have to lookup what those are!
What is your budget?
Husband doesn’t usually care about that, but I do. I’d have to research it for each location, but I’d say "midrange " most of the time, with maybe two or three “splurges” over the course of the trip.
As far as I know your children are all adults. Do you mind traveling a bit or you want to stay to eat near your hotel?
I’d prefer to stay near the hotels

If you have already plans for each day, it’s useful to let us know you will be in which district according to your daily visits to plan your meal accordingly.
**Okay. I’ll be back with that. **

ETA I added details for the other cities on the split off thread.

All the tours are private.

In Paris we arrive at 2 on a Saturday, have morning tours on Sunday, Monday and Tuesday ( the Monday tour is Gourmet walking in Saint Germain des Pres), and on Wednesday we head back home.

Re Paris. The area around the Hotel Brighton is not exactly well known for the quality of its restos. It has a tiny resident population but lots of tourists because of all the hotels in the neighbourhood. The quartier does have a certain liveliness during the day because of all the office and shop workers but, at night, it’s more of an area for visitors than us Parisians and so I’m not really clued in.

Not my style and no recent experience but l’Ardoise on rue Mont-Thabor has a good reputation for simple trad.

Time-warp Le Rubis on rue du Marché-Saint-Honore (one of the very few streets in this area with signs of real life) is worth a go. Very popular with workers at lunch. I’ve never been for dinner.

Not great food but the two restaurants in the very grand, historic and recently re-opened Hotel de la Marine ( https://www.hotel-de-la-marine.paris/ ) on the place de la Concorde are a very unique touristic experience. Have a look at the menus to see if they appeal. https://cafelaperouse.com/ and https://mimosa-rueroyale.com/

BTW, the “gourmet” walking tour in St Germain des Prés features chocolate, pastries etc. If you want a more comprehensive sample of the parisian food scene, a tour of the Haut Marais is probably better.

In London, I have always found Westminster/ Victoria dull and uninteresting, especially for food. Given that you have a lowest common denominator among you, maybe pub grub in pubs in nearby Belgravia could be suitable. Check out, inter alia, The Grenadier on Wilton Row, The Star Tavern on Belgrave Mews West, The Thomas Cubitt on Elizabeth St. All within a 15-min walk (at London walking pace which is probably 3x faster than the typical California saunter) from your hotel. If you can persuade the lowest common denominator to grab an overpriced burger in one of the hotel bars rather than accompany you and if your budget allows an occasionally splurge, The Muse by Tom Aikins on ultra-cutesy Groom Place is superb… but a sticker shock alert.

It’s 10-15 years since I ate at L’Ardoise on rue du Mont Thabor, but it was fine, especially for the reduced offerings on a Sunday night.

Probably 7-8 years since I had dinner at Le Rubis (in the 1st, there are other establishments with the same name in other arrondissements) and it was equally good foodwise to the lunch, and (thankfully) more relaxed.

A big second to Parn’s suggestions in the Palais Royal quartier.

In Paris we arrive at 2 on a Saturday, have morning tours on Sunday, Monday and Tuesday ( the Monday tour is Gourmet walking in Saint Germain des Pres), and on Wednesday we head back home.

Just noticed that your gourmet tour of St G des P is Monday. But oops, Monday is the traditional closing day for food shops in Paris. Not sure what sort of “gourmet tour” it would be when most shops are closed.

And a strong recommendation for Amsterdam: The almost daily street market on Albert Cuypstraat in the vibrant and somewhat hip De Pijp quarter. The best concentration of Dutch street food in Amsterdam. But a warning: pickled herring is an acquired taste.

Just noticed that your gourmet tour of St G des P is Monday. But oops, Monday is the traditional closing day for food shops in Paris. Not sure what sort of “gourmet tour” it would be when most shops are closed.

I was hoping for some feedback about closures. Thanks again!

It’s been said we don’t actually walk in California, except maybe on the beach, but we are originally from New York ( where I guess I acquired my taste for pickled herring) , and I hear it’s like riding a bike!

Well, he’s the one with the credit card, so… ( the dreaded ellipses!).

But seriously, food is only part of the trip. It’s also about bringing our family together for a few weeks here and there.

let us know you will be in which district

Oops! I forgot that part; I don’t know the districts just yet, but I imagine folks in Paris do.

Sun morning tour is The Louvre- I think this will be our second visit there.

Tuesday morning tour is Versailles Palace and Garden- I love gardens! I think being close to the Tuileries Garden is one reason why husband chose the Hotel Brighton.

BTW, @ParnParis , I am busily researching your suggestions; thank you for taking the time. I am having a tough time pulling up actual menus, but maybe that’s a good sign.

I am hoping by the time I’ve researched suggestions I can make one or two online reservations. Those are a big plus since aucun de nous ne parle français.

It looks like the morning tours end at 1:30 or 2. Do many eating places close in the afternoon ?

For which cities do you still need reservations? And how large is the group you are going with?

I promised to give some info on Amsterdam. Maxentropys suggestions are very good, as he just visited.

For rijsttafel, which is basically Indonesian food as Indonesia used to be a Dutch colony, I can recommend the basic but reliable Sama Sebo in the lovely area of Amsterdam South. Be aware that wherever you’d go in Amsterdam for Indonesian food, it won’t be that ground breakingly good. Locals do not eat Indonesian that often anymore, as they seem to cater mostly to tourists and elderly people. If you would want very good authentic Indonesian food you will have to go outside of the city.

Another former colony is Suriname, and the beauty of this cuisine is the fusion between Indonesian, Indian, Chinese and Caribbean food. Imho it’s one of the best cuisines in the world!

If you need more info please let me know. As always, more local, imho nicer, experiences will be found outside of the direct city centre. In the case of Amsterdam that means the areas called West (Overtoom, Kinkerbuurt, lots of students), Oost (hipsters), and South (wealthier clientele, the famous musea are here).

Which cities have better Indonesian restaurants?

In the Netherlands, the largest population of Indonesian people can be found around The Hague and neighbouring municipalities like Rijswijk. I used to work in Rijswijk for 5 years and went to lunch for Indonesian quite often…

In the surroundings of Amsterdam you can find great Asian food (Japanese, Korean, Indian, and also Indonesian) in neighbouring Amstelveen, because a lot of expats live here.

And then in Amsterdam you will have summer festivals like Kwaku which is running now until next week for very good Surinamese food. There are some good spots in Amsterdam as well, but only for take out, like Rotishop Gieta near Mercatorplein. https://nicelocal.co.nl/amsterdam/restaurants/rotishop_gieta_surinaams_afhaalcentrum/reviews/

shrinkrap – You didn’t give us the dates that you are in Paris, just the days of the week. Hopefully, the Sunday you’re going to the Louvre is not September 4. The first Sundays of each month are free admission and the museums are jammed.

Le Bistrot du 11 is a good choice and offers lunch on Tuesday, which is unlike la Table (1 star Michelin restaurant by the same chef) and Le Cave which open only for dinner.

Suriname, and the beauty of this cuisine is the fusion between Indonesian, Indian, Chinese and Caribbean food.

. The first Sundays of each month are free admission and the museums are jammed.

Thank you! Our visit to The Louvre will be two weeks later.

That sounds right up my alley!