How was the naim chien chrouk?

Prahok kites: Normally i don’t like chewing on crunchy raw hard veggies like cabbages. But in this case, the crunchy texture paired very well with the savory and aromatic mashed pork dip. Made for a addictive snack. 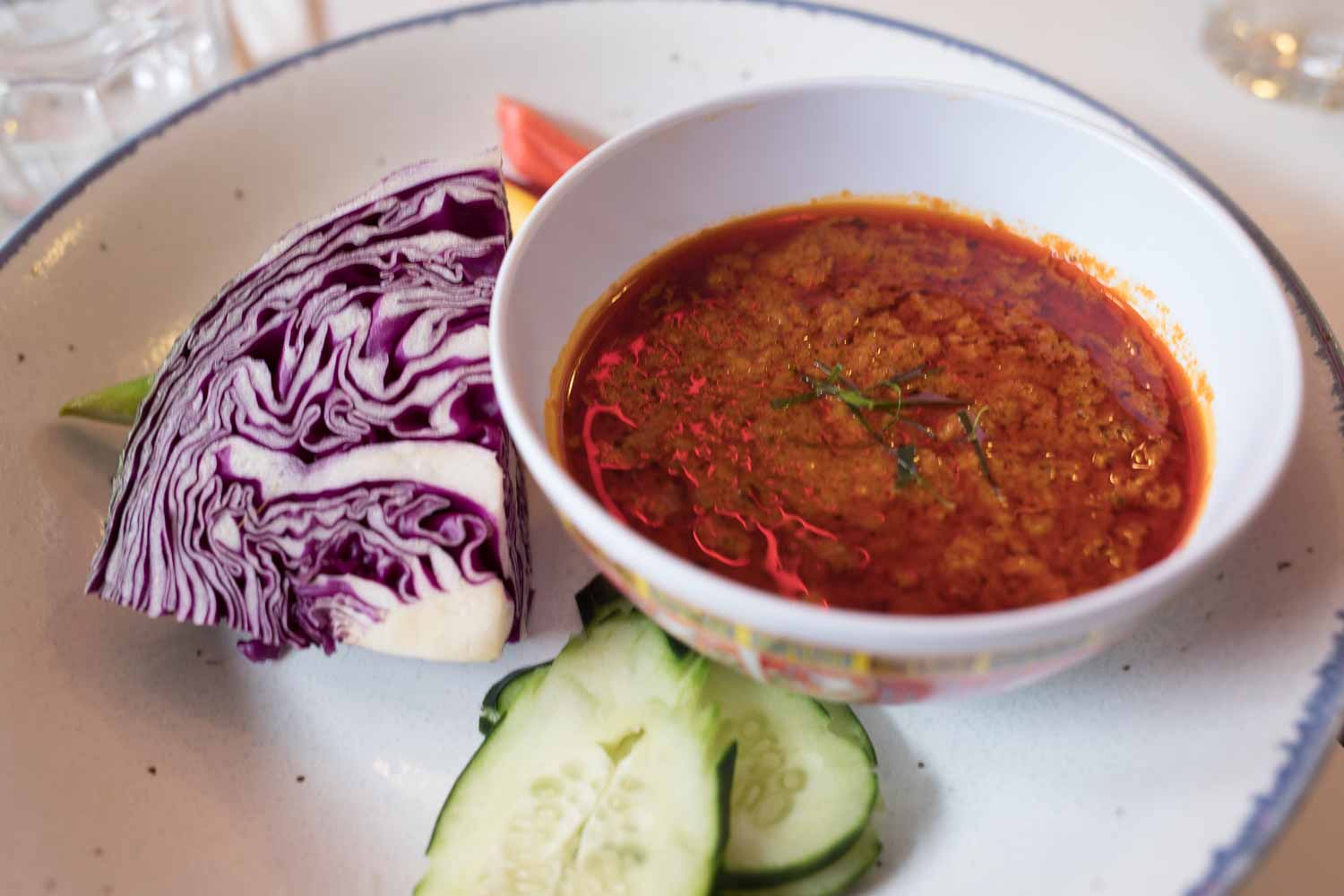 Koh: Just like @tm.tm said, a very good dish. Contrasting sweet and savory. Well balanced flavors. Just wish there were a little more of each components. A bit like the dtom kiem pork belly dish at Hawker Fare, but I think made a little more refined. 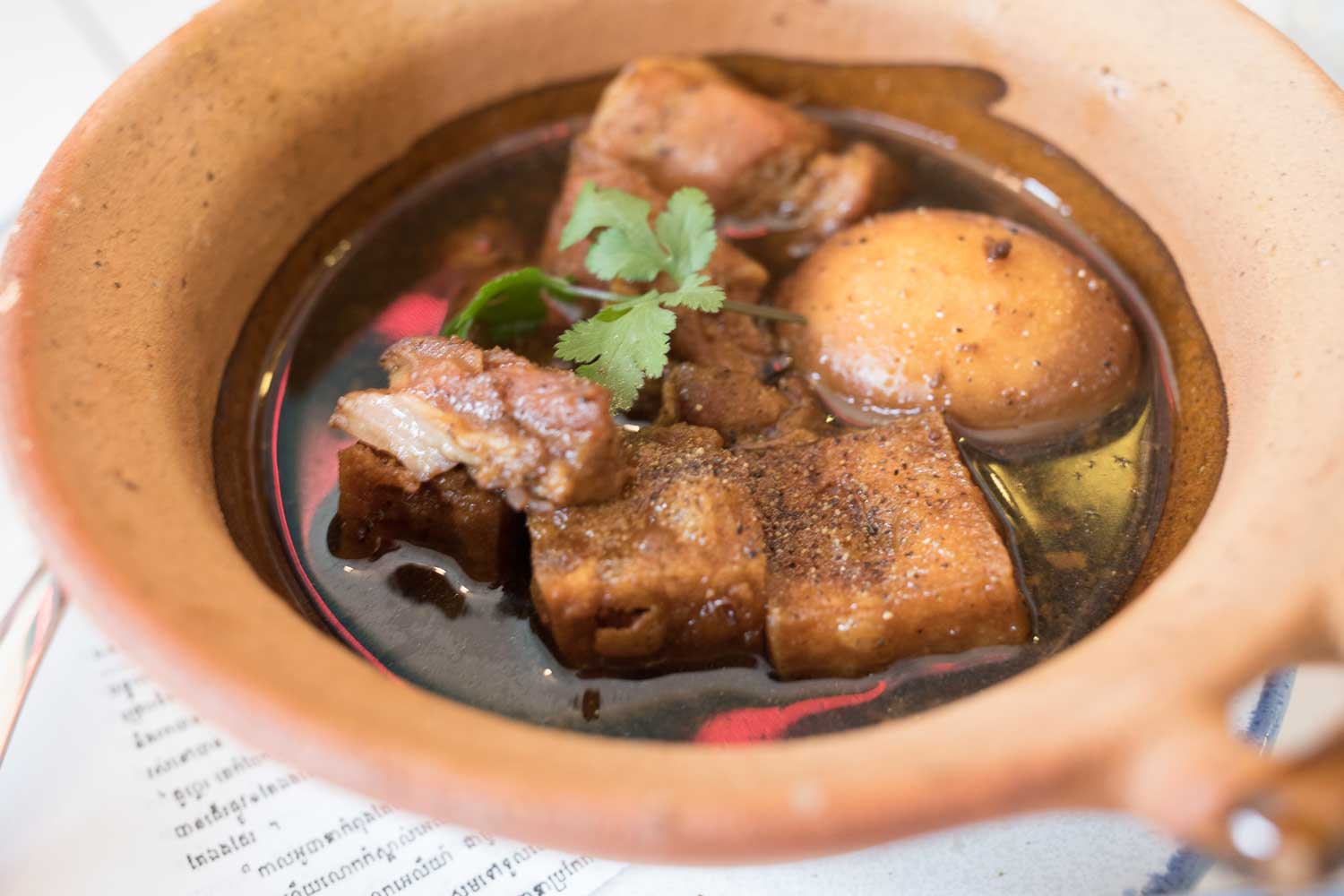 Machoo kroeung soup: That’s my favorite of the meal. Nuanced soup with a slight coolness from the tamarind and kroeung paste with a little taste infused by the curry leaves. Slight heat from the chilis. Excellent soup. The crunchy and hard texture of dried curry leaves didn’t quite work for me though. 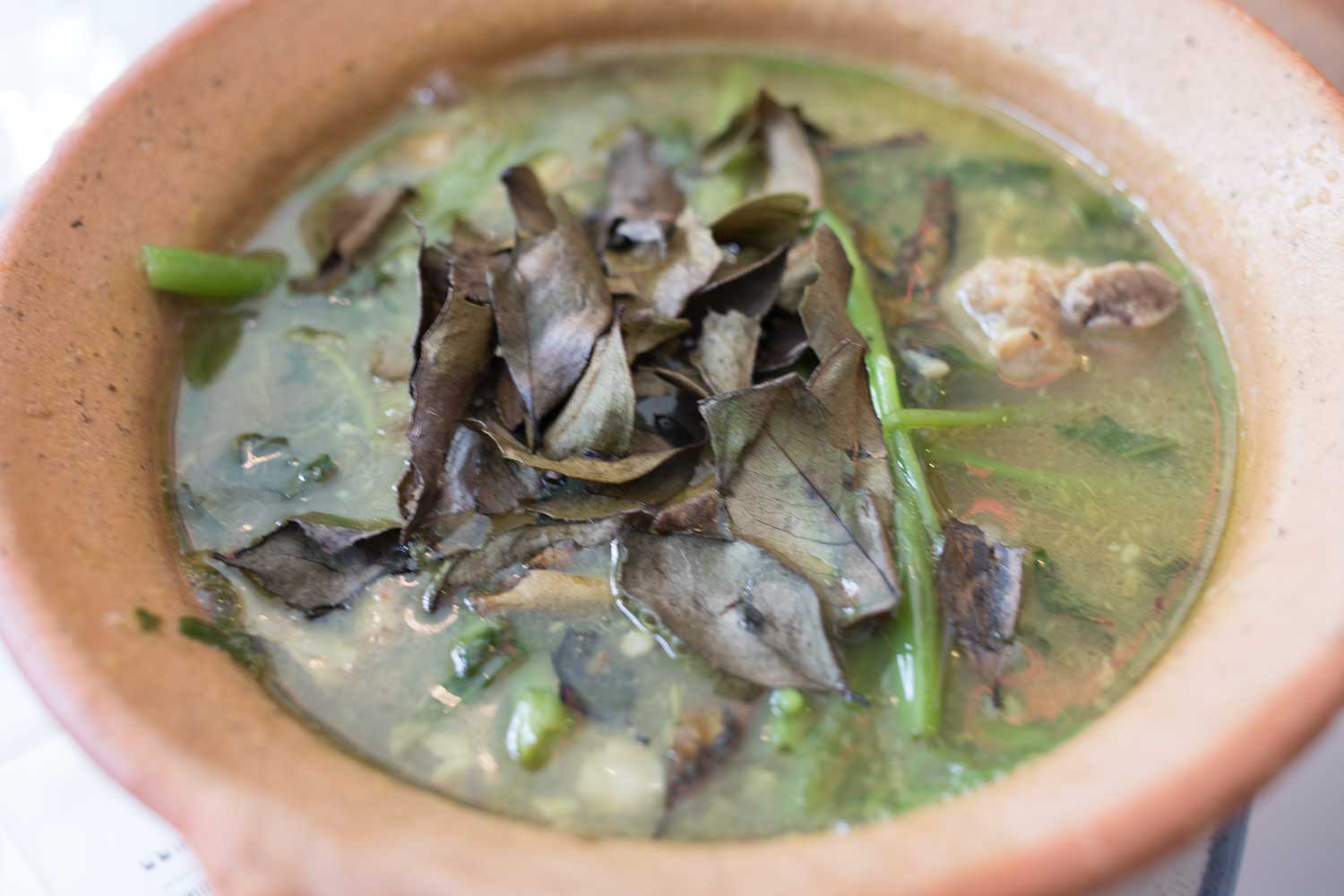 Kuri saramann: Decent shor rib curry. Curry on the sweet side. The other dishes worked better for me though. I thought the peanuts used in the curry was rancid, though.

They were definitely going for the well-prepared-small-portion angle. Restaurant was full. Kitchen was pretty slow. Give them time to work out the logistics.

The menu from that day. 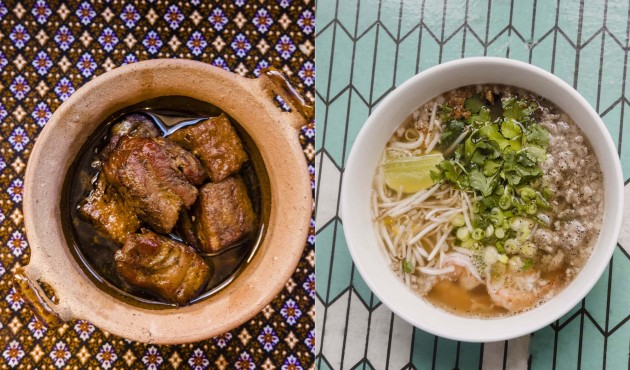 At the new incarnation of Nyum Bai, lunch is mostly focused on the street food dishes Yun specialized in when she was constrained to a food-court-kiosk kitchen. Dinnertime, however, is an opportunity to experience the kind of quintessential home-style Cambodian meal Yun describes (minus the part where you sit on the floor). The aforementioned pork dip has a Bolo­gnese-like texture and arrives at the table warm, exceedingly fragrant, and accompanied by raw and steamed vegetables. The amok, a fish custard that’s steamed inside a banana leaf, is delicate and rich. The koh, a saucy caramelized-pork-belly dish, is cooked until the meat is so tender you can cut it with a spoon. And the machoo kroeung, a sparerib soup that Yun most associates with her childhood, is an intense pop of flavors—tangy, spicy, funky, and pleasantly bitter. Fittingly for a restaurant whose name translates as “eat rice,” everything goes so well with steamed jasmine rice that you should order one or two extra rounds.

I haven’t had the amok. I ate the other dishes profiled by Luke during lunch. Looking at the menus upthread, it looks like Yun has made those dishes available during lunch as well.

But I think there are still dishes that are evening only. I need to make it back to Nyum Bai soon.

Luke Tsai
@theluketsai
For my money, Nyum Bai’s new Fruitvale location is the most exciting new restaurant to open so far this year. 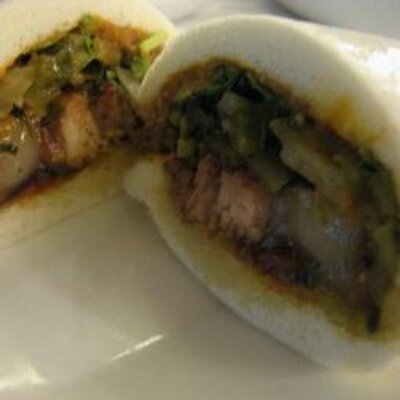 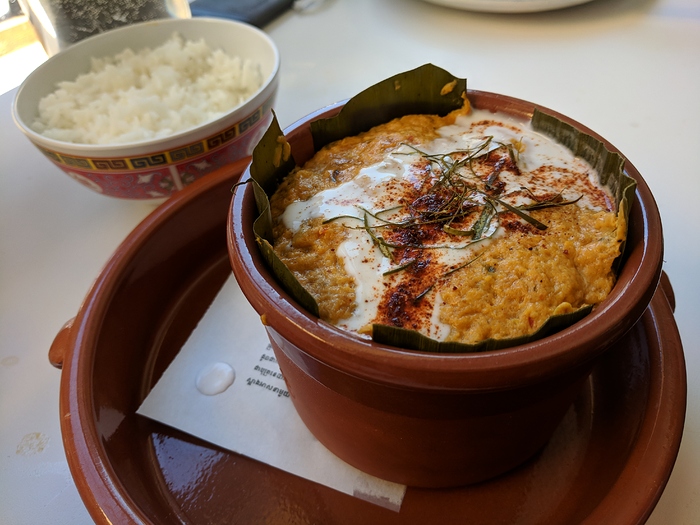 We went for lunch earlier this month and had the amok amongst other dishes. It was delicious, quite rich - almost a chawanmushi like texture but with the bits and flavor of fish interspersed within. If you are in a hurry, note - they warned us it would take a while to prepare.

For my money, Nyum Bai’s new Fruitvale location is the most exciting new restaurant to open so far this year.

I haven’t been to other new Oakland restaurants, but Nyum Bai certainly is serving up some really good food…!

Did the amok fill up the whole height of the container? Or did they have filler at the bottom? If the whole thing was amok, that’s a lot of amok…!

BTW, welcome to the board! Glad to have you join the discussions- curious how did you find the site? A bunch of board participants wrote a little blurb about themselves in the following, feel free to do the same!

Hello Fellow SF-Bay Area HOs! (That’s what we’re calling ourselves, right??) Our Fearless Founder reached out to a few of us – hyperbowler, ernie_in_berkeley, and myself, mariacarmen – to see if we could help brainstorm ideas to invigorate this board. We all know what a vibrant food area we live in – why don’t we have more activity here? What are we missing that we had over at CH? I will admit I’m guilty – leaving CH opened up time I didn’t know I was missing, and other things filled in th…

@sck - no filler, and as you mention, it was quite a lot of amok! Though we wanted to, we weren’t able to finish the whole thing in that one sitting.

Thanks for the warm welcome! I was a long-time Chowhound lurker and very (very!) occasional poster, but it got a bit tedious to keep up with the site activity after a few of the redesigns. I had been looking for a replacement for Bay Area food discussion since then and think I saw a mention on one of the other food sites (i.e., Berkeleyside, East Bay Express, Eater), which brought me here. Glad to see there are a lot of familiar handles posting both here and on Food Talk Central from the earlier Chowhound days.

Isn’t Powderface Beignets right there, too?

It is. Powerface is opposite of Reem’s.

Another meal- less successful than the other two.

Pineapple soup/ machoo manor soup. Sweet, salty, sour at the same time. A little bit like tom yum without the heat. Pineapple, tomatoes, tamarind and herbs. It was okay. Just get the machoo kroeung soup instead.

Water spinach $12: very disappointing. Vegetables had loads of fiber. Inedible. Had to spit out most of them. Salty though its by design. The restaurant needs to do a better job sourcing or just leave the items they can’t get decent ingredients for off the menu that day.

Ngoum banana salad. Purple cabbage with a dressing that heavily basil/ lime flavored. Best of the four dishes that day.

Ran out of amok that day.

Went here for an early dinner/late lunch. Had a bowl of their kuy teav Phnom Penh noodle soup ($11.95). From my understanding (Wikipedia), this dish is very similar to the Vietnamese dish hu tieu nam vang, and has Chinese origins, with a pork broth, rice noodles, and various toppings.

It may have been due to hunger, as I only had a chocolate bar for lunch, but this may have been the best version of this dish I’ve ever had. It was slightly lighter in toppings than other bowls, as the only toppings it had were ground pork, (perfectly cooked) shrimp, beansprouts, cilantro, and green onion. The star of the show was the broth though, which was porky, flavorful, and a little sweet with a hint of garlic, and had a good amount of fat on the top which gave it a slightly slick mouthfeel. The rice noodles were also very good, medium sized and firm. 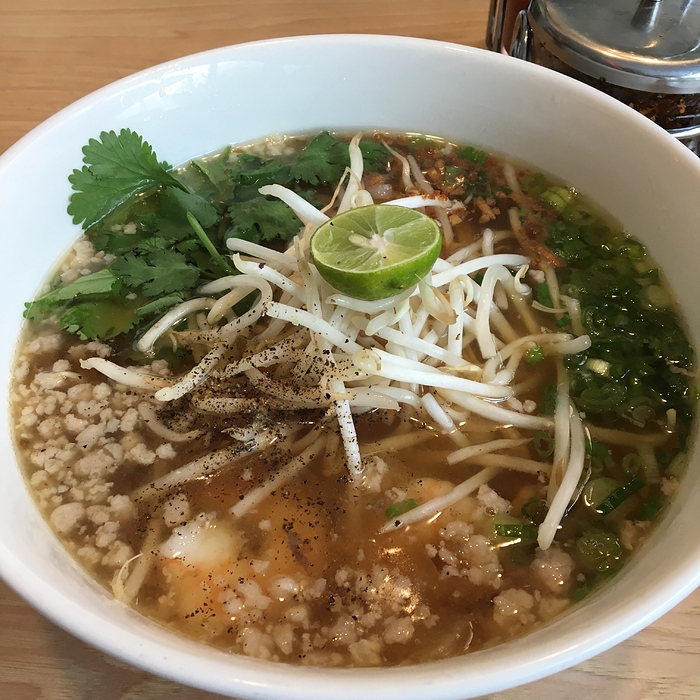 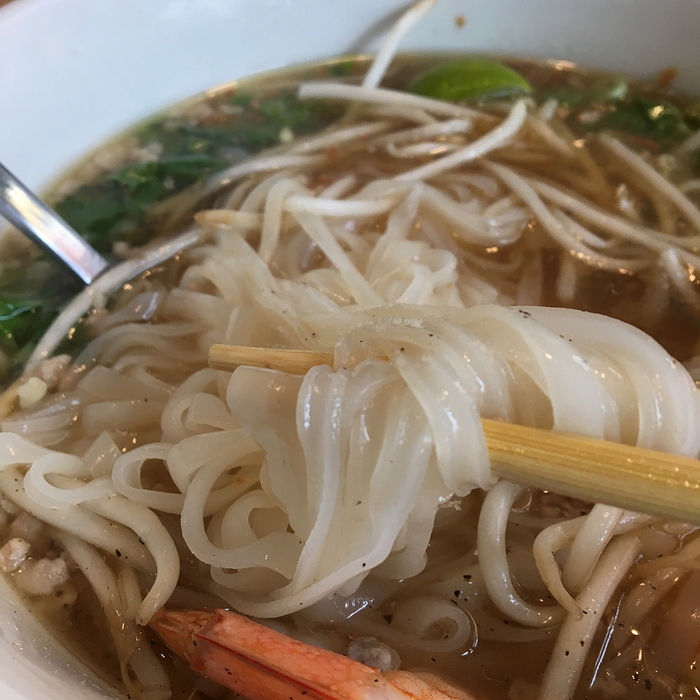 Very convenient to Bart, it’s just steps away from Fruitvale station. And as @sck noted above, Nieves Cinco de Mayo is next door for dessert. 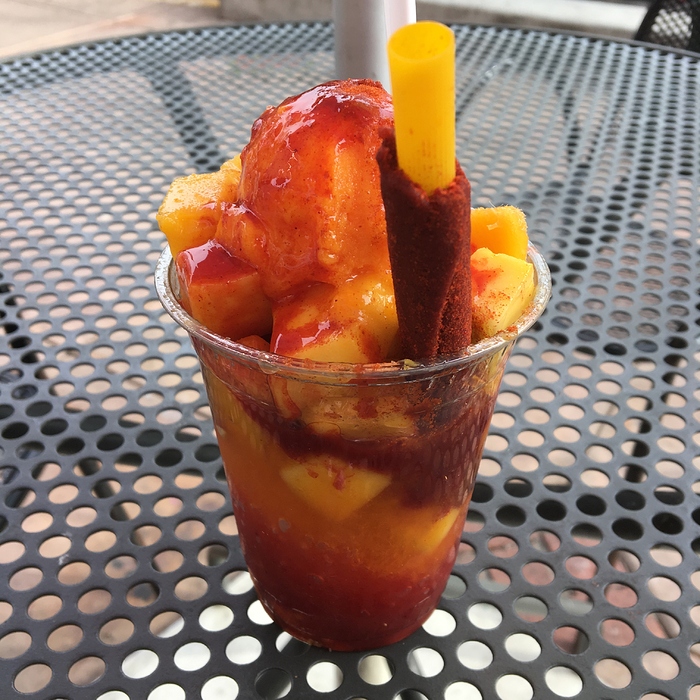 I visited at weekday lunch. It was quiet. Nite Yun was working at her laptop at an outdoor table, and I got a chance to thank her for the food and music. I really enjoyed this meal. I only had ten days in Cambodia but tried to eat well, and I don’t think I had better food there. I had the prahok ktiss and the amok (both dishes I’d had several times in Cambodia), and a glass of draught beer. It cost $50 all in. 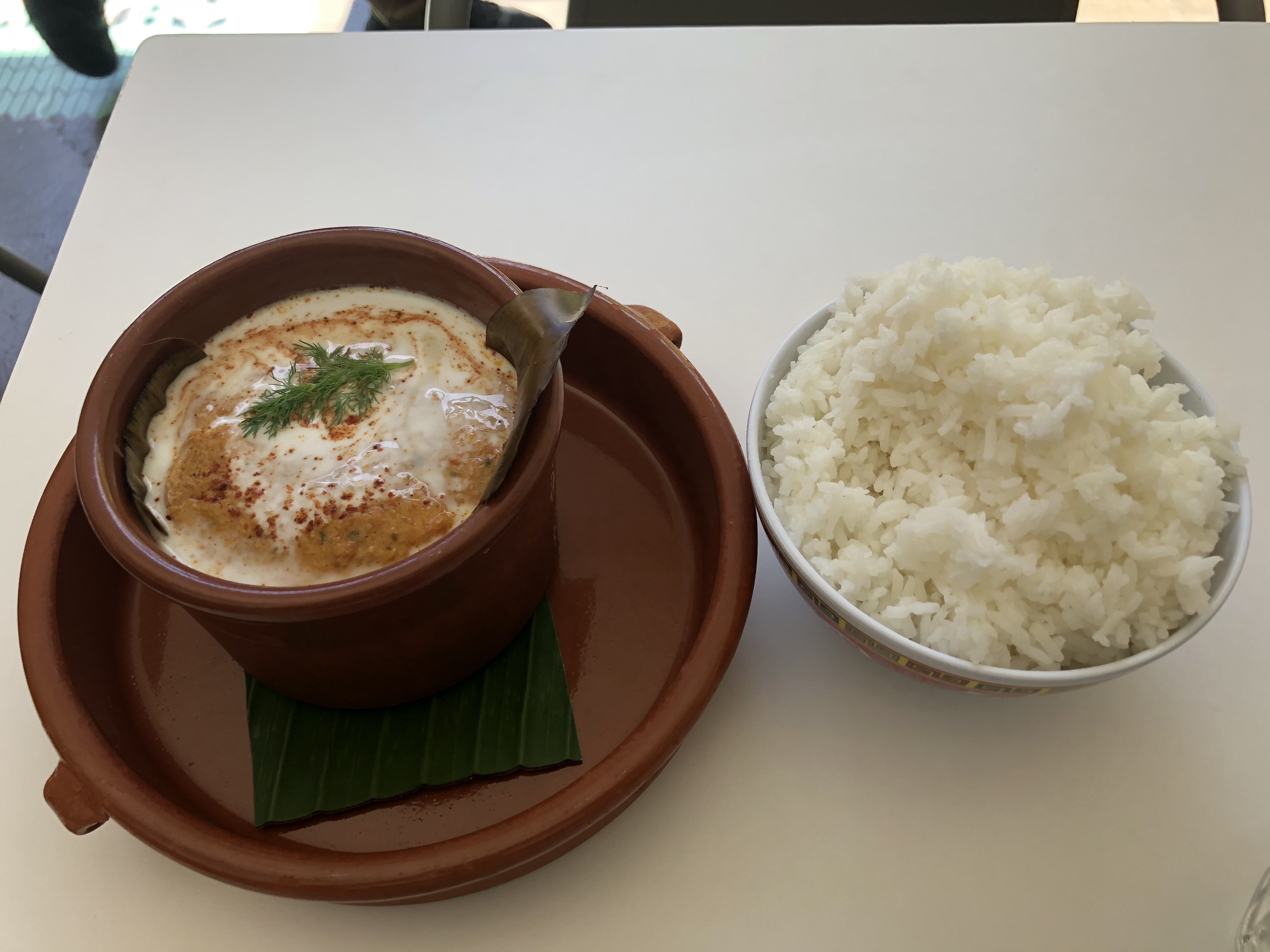 Their IG says that they have a new lunch menu. Any new items? 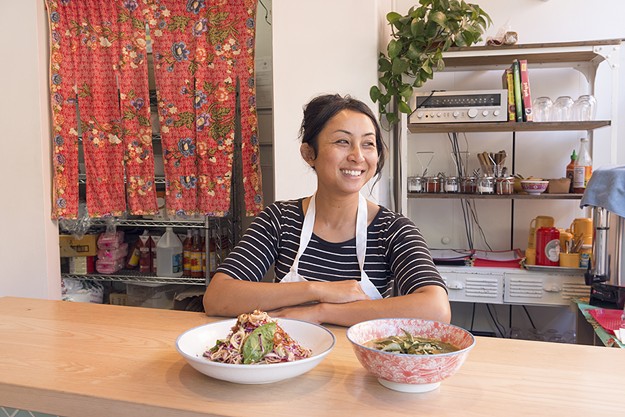 The Fruitvale restaurant captures the underrated expansiveness of Cambodian cuisine.

The retro-modern space looks adorably inviting, with pops of pastel pink and baby blue. Cambodian rock plays nonstop, and nearly destroyed album covers decorate one of the walls. But the area that feels the most Cambodian is actually outside, in the open-air, teal garage where incense burns. It’s a great spot to order the machoo kroeung soup, the single dish that made me utter, “Oh my god, this is hella Cambodian.” Pork spareribs float in a soup visibly full of kroeung, the spice paste consisting of lemongrass, shallots, galangal, kaffir lime leaves, and fresh turmeric that makes Cambodian food taste Cambodian. The broth braced in its herbaceous quality, with crunchy water spinach and meaty pork that fell off the bone. 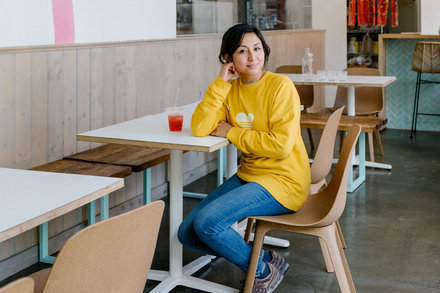 A Cambodian Refugee Cooks From Memory at Nyum Bai

Since opening the restaurant in Oakland, Calif., in February, Nite Yun has followed Khmer cooking traditions that war and genocide nearly wiped out.

Chien trey & ngoum mango- delicious. Lightly breaded and perfectly fried. I thought it’d be too American. But just a light, fragrant basil based dressing with green papaya added the perfect touch of Cambodian to the dish. 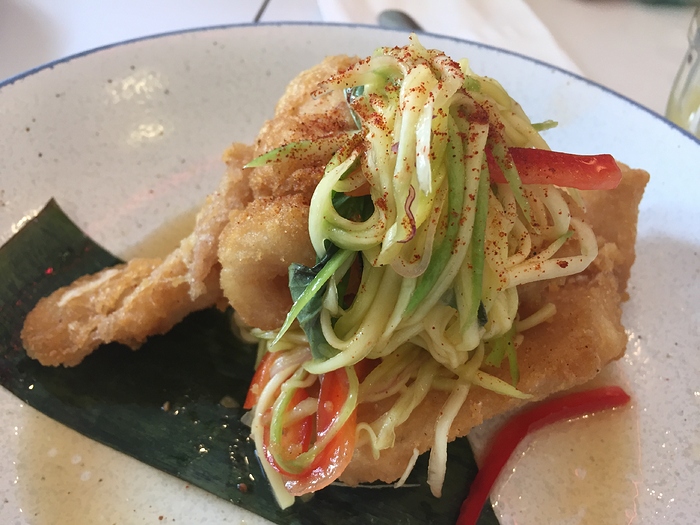 Finally I got the amok. Its as described by @zippo1 and @e_yoko- rich, fragrant and delicious. Its been a while since I had the amok at Battambang, but Nyum Bai’s was at least as good. 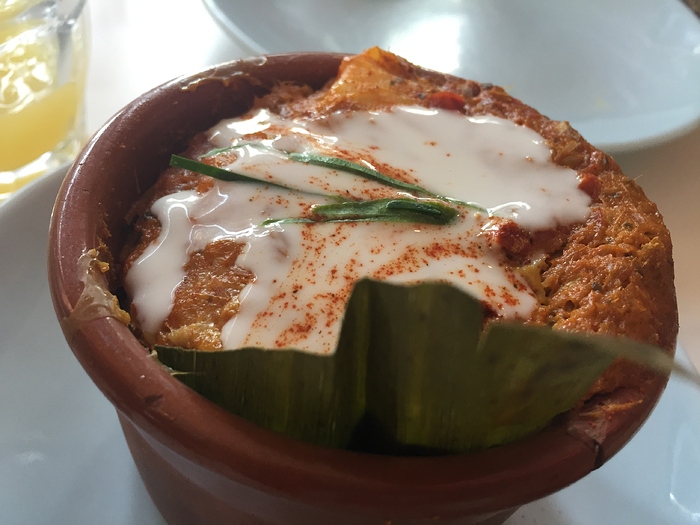 Koh, this time with bamboo shoots. Good as usual. 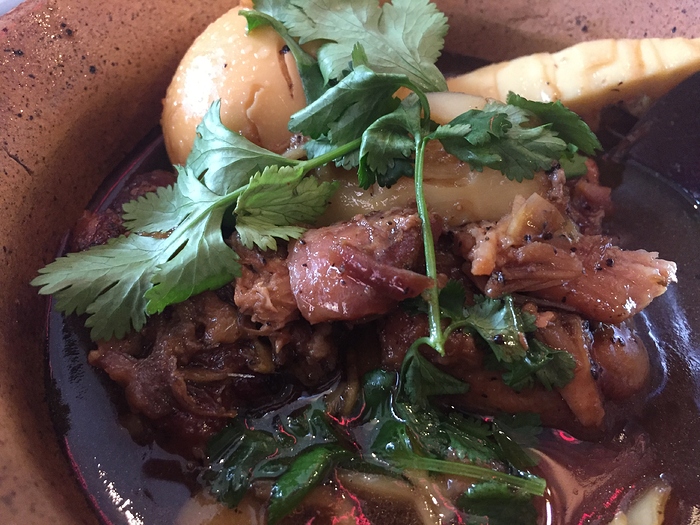 Oh, the glass noodles sound quite good. Also have to try the bok la hong, cha troup, cha kroeung sach moan in future visits. How are their sweets? 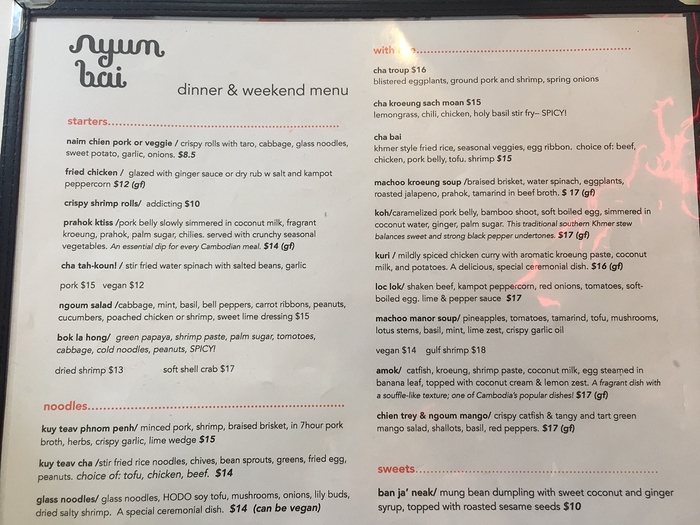 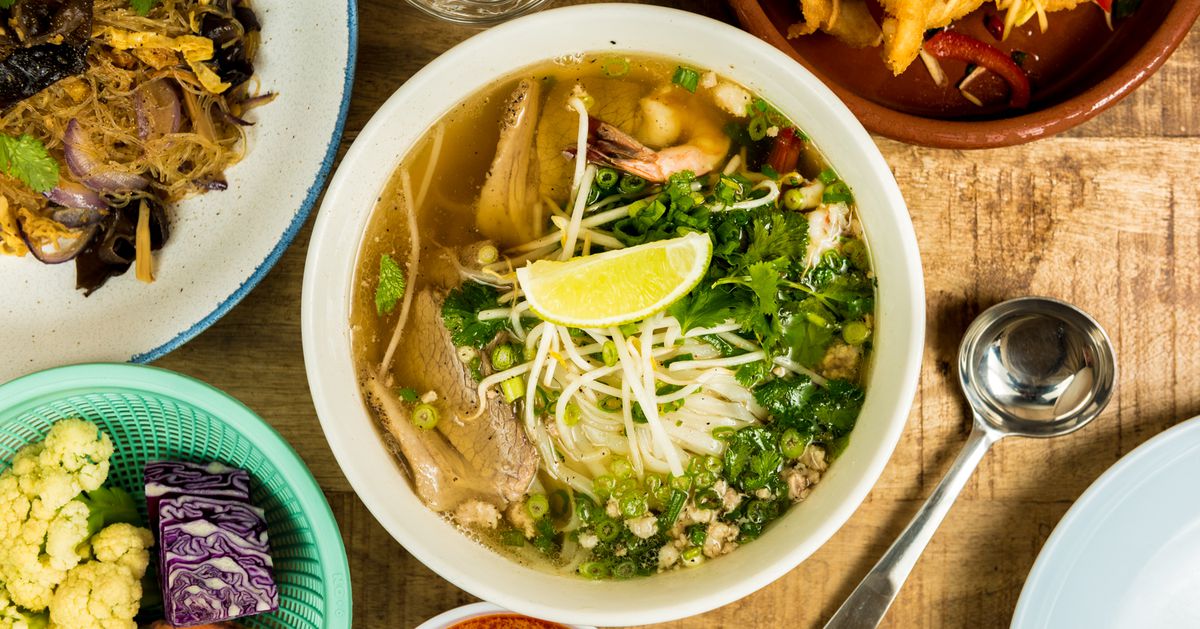 Nyum Bai Will be a Fast-Casual Restaurant When it Reopens After the...

It will be a long time before things return to normal for Bay Area diners, chef Nite Yun says

Last week, Yun decided to shut down the restaurant completely for the time being, “to decompress and come up with a new plan.” As she tells Eater SF, that new plan will most likely entail reopening in a couple of months as quite a different kind of restaurant: Nyum Bai will shift to fast-casual service, and serve a menu focused on takeout-friendly Cambodian street foods instead of the family-style home cooking that had become the restaurant’s claim to fame.

That’s pretty astute to switch to fast casual takeout friendly food. Though her family style home cooking really shined and will be missed.