I returned for another good meal. Snack items are inexpensive and the offal ones in particular seem sized for a few people. Some of the menu items overlap with what’s served at Hong Kong Style cafes, for which my experience is limited to places that use crazy amounts of MSG in everything. Are other places serving food of comparative quality? 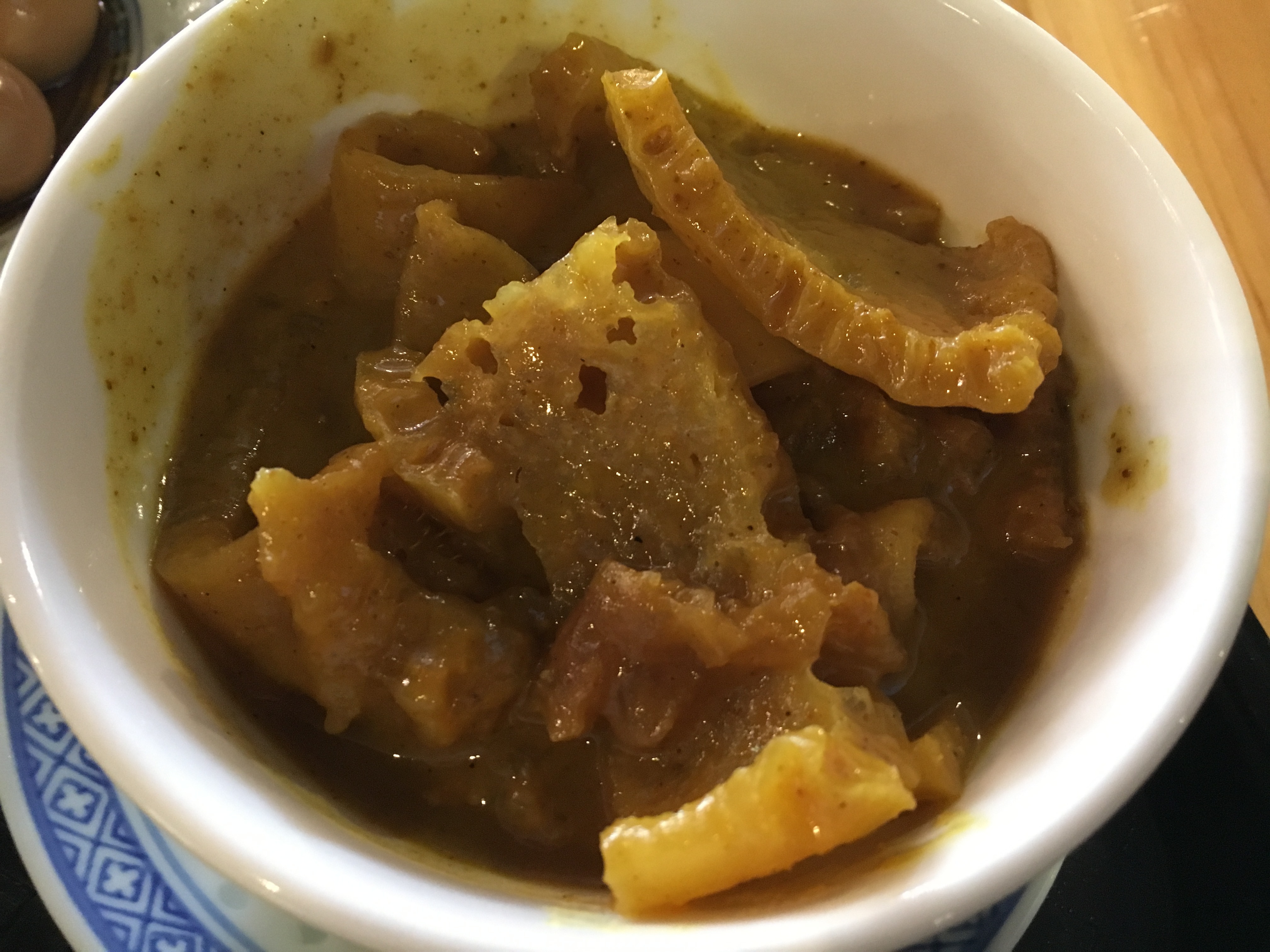 The star of my two visits was the curry pork skin, and I regret not getting a more complimentary photo. The skin is soft from slow cooking and the resulting lard- flavored gravy, tinged with a fragrant curry powder, is liquid gold. 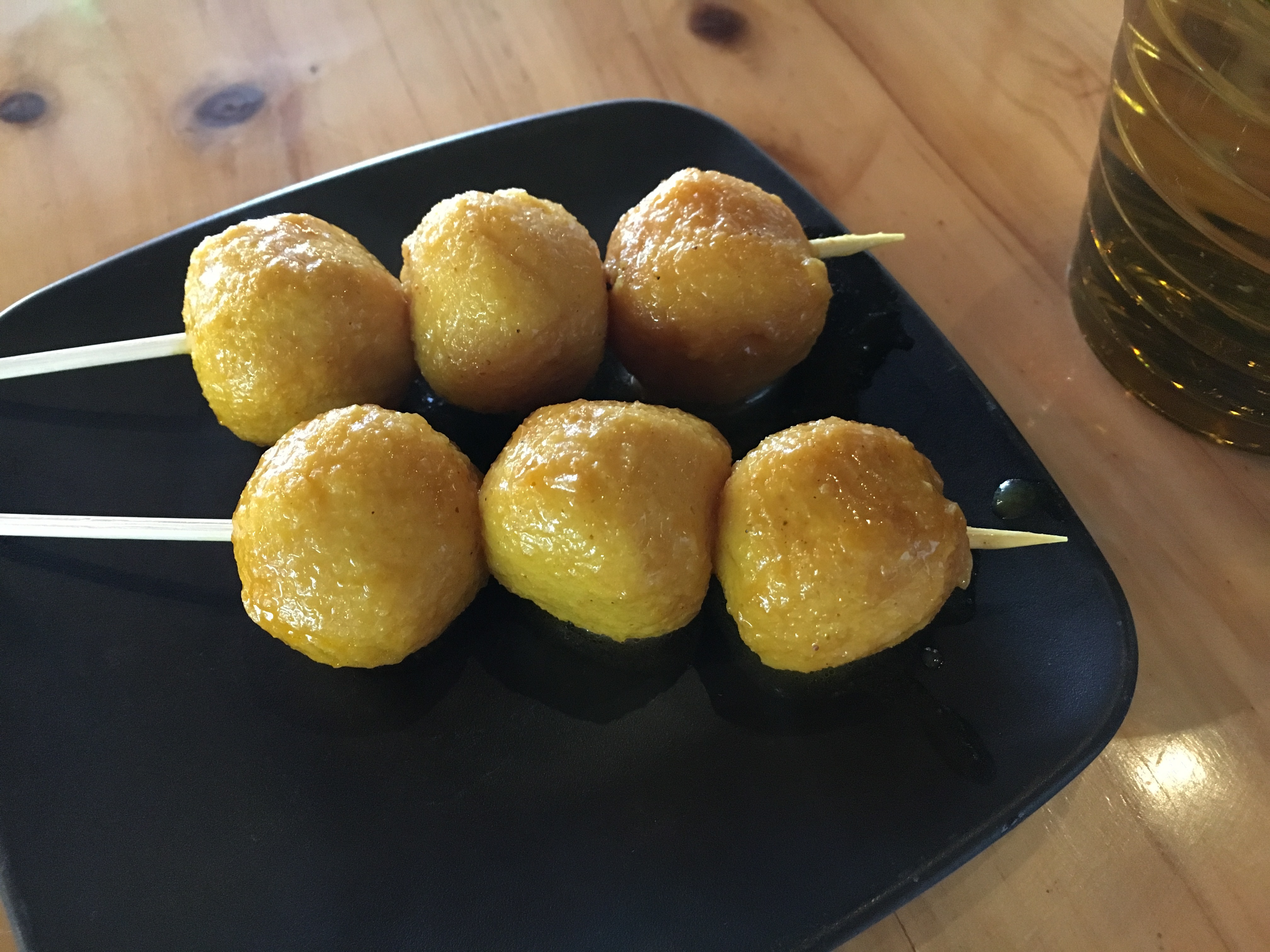 The curry powder is also tasty on the fish balls— I wonder which brand of curry powder they use? It’s very aromatic. 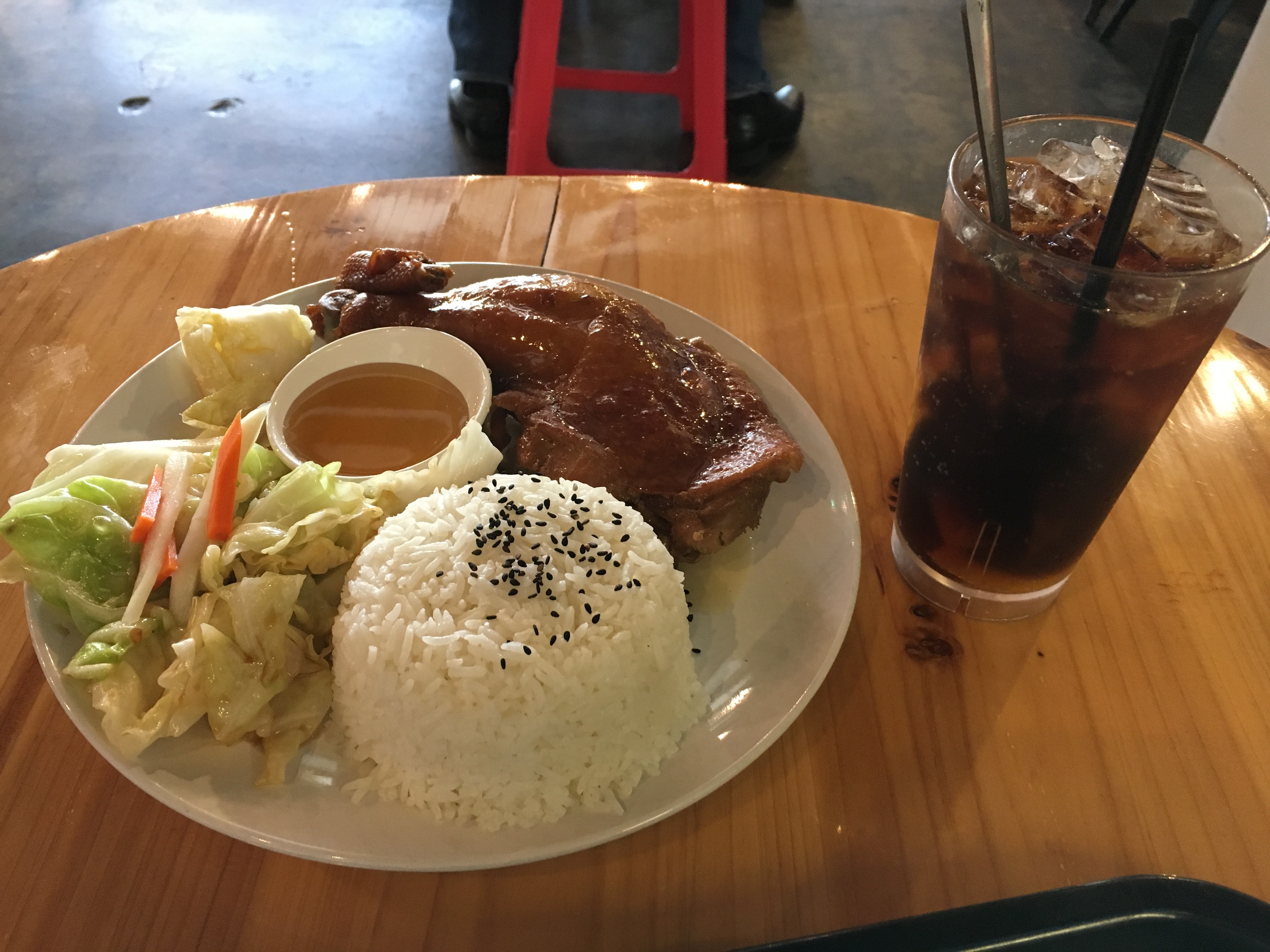 Cola soy sauce chicken has a savory sweet taste that neither overwhelmed the chicken nor was syrupy. A super sweet dipping sauce comes on the side. 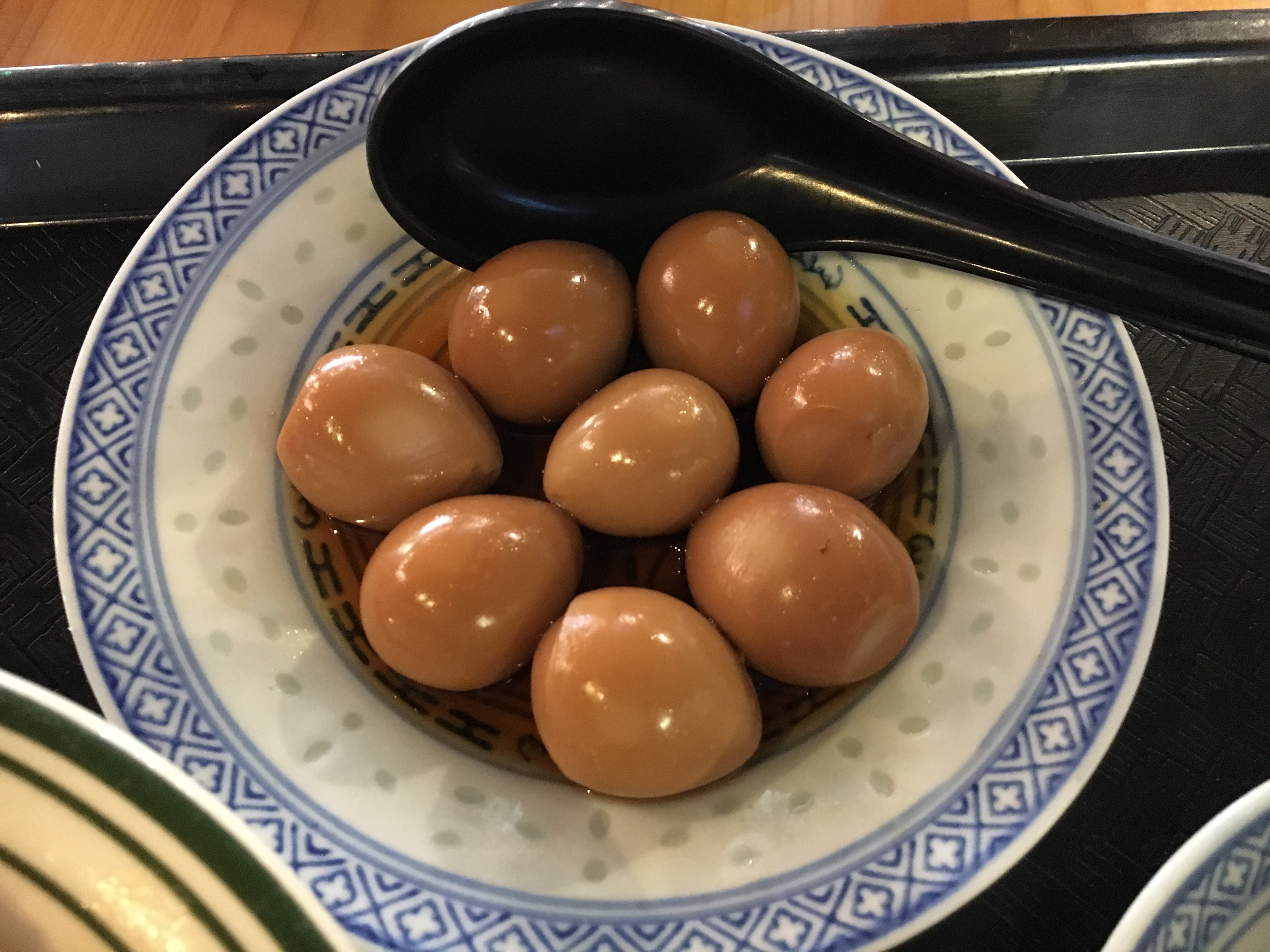 For two dollars you get 8 bouncy quail eggs with creamy but cooked center. 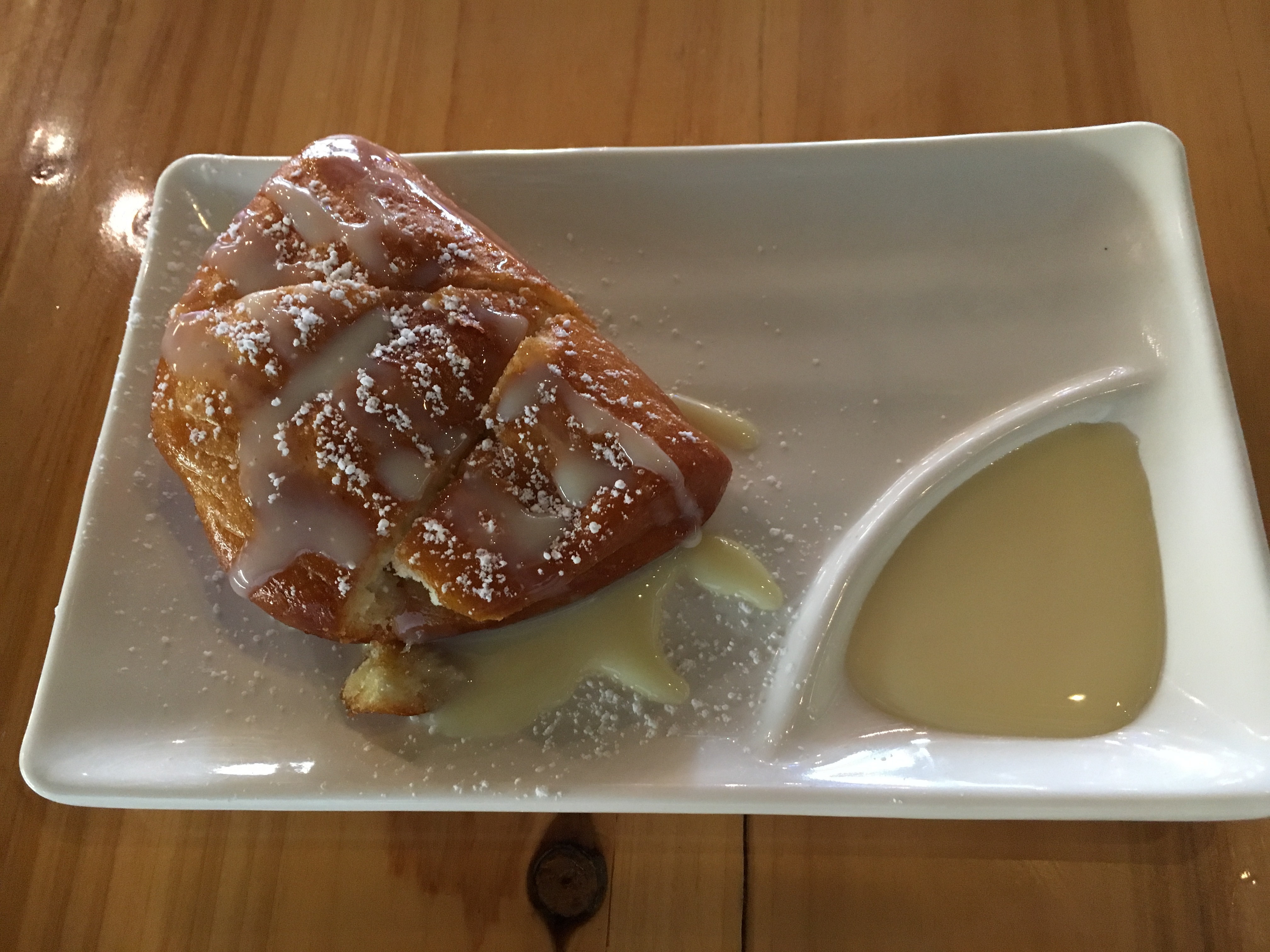 I liked a sweet item on the specials board, I forget its name— it’s a doughnut like thing with some reduced sweetened condensed milk on the side.

Next time I’ll try the wonton noodle soup, which they started serving today.

my experience is limited to places that use crazy amounts of MSG in everything.

No crazy amounts of MSG here?

MSG probably in the fishballs themselves, but I didn’t note any MSG in the sauces or other ingredients (I’m not against MSG in moderation-- or the corn syrup used in the Lemon Coke I ordered 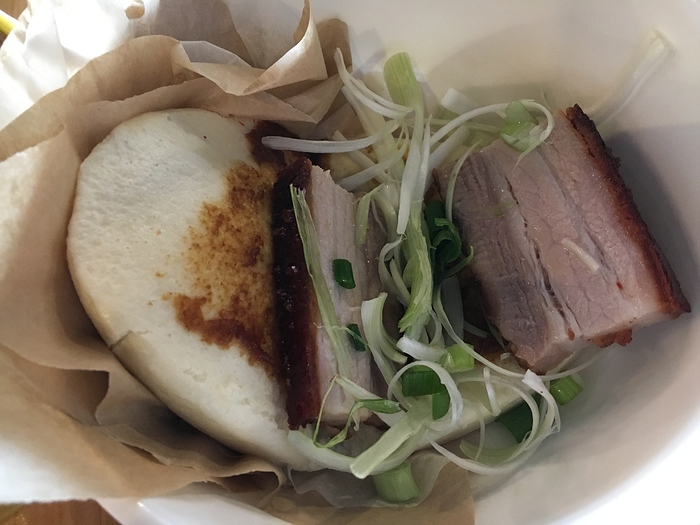 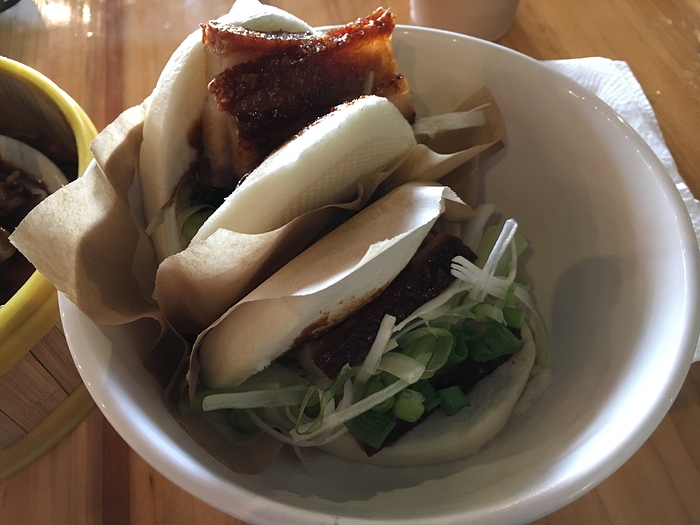 Another winner on the pork skin front— roast pork buns. Pork skin was crisp, and it’s flavor penetrated the clamshell buns and enhanced the meat. I ate some skin in its own, and found it more flavorful and less teeth cracking than the skin of the suckling pig I had at Koi Palace a few months back. 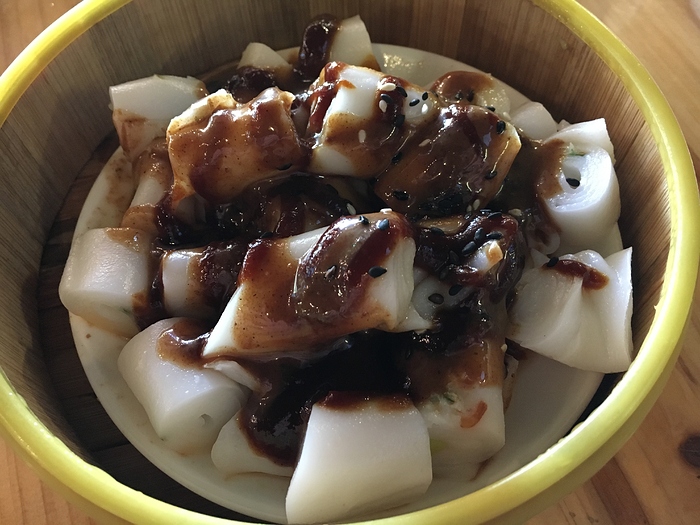 Rice rolls had a sauce with an umami and nutty component (hoisin and sesame paste?). Tasty. 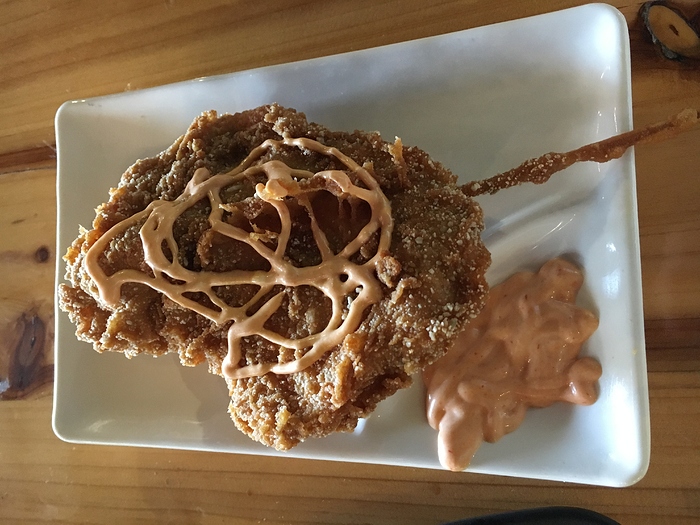 Fried Chicken steak skewer was a deep fried chicken fillet and had some kind of spicy mayo drizzled on top. Fine, but there are more interesting things on the menu. 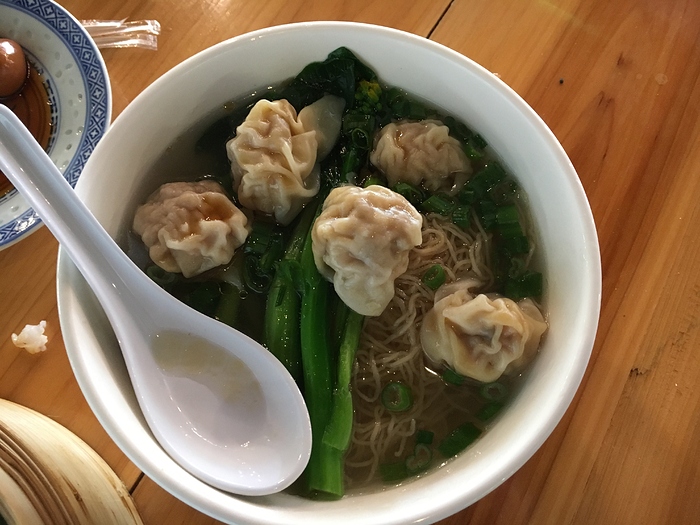 I’ve been overwhelmingly pleased on my previous three visits, but I struck out this time.

Wonton noodle soup was dominated by sesame oil, and the broth itself lacked flavor or body. On the plus side that means they’re not dousing it in MSG. The wontons were OK – – bouncy, large chunks of shrimp were in a favorable ratio to pork; Tight wrapping with no tail of excess wrapper; wrapper and generous amount of Chinese broccoli were overcooked 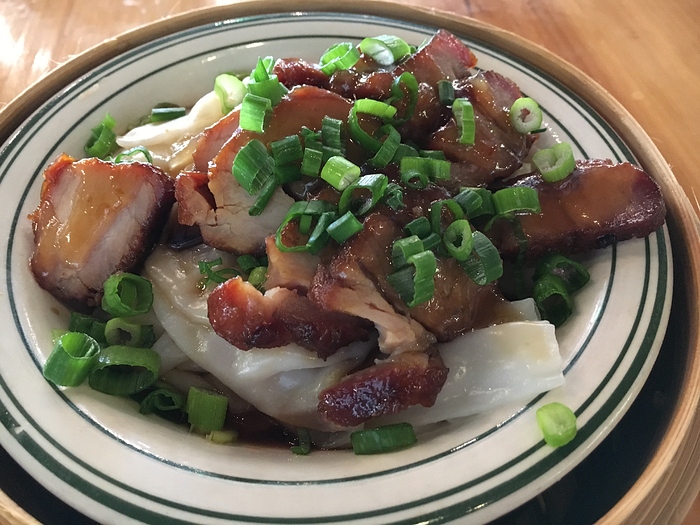 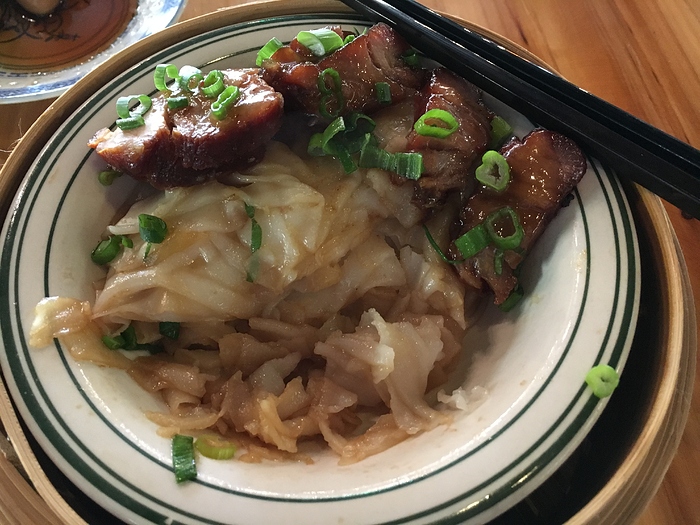 Roast pork on Rice noodles also suffered from over cooking – – the white rice noodles sat in the bottom of the bowl soggy and stuck together, the pork on top was dry, in the turkey breast sense.

I couldn’t finish the sweet chrysanthemum tea, which seemed even sweeter than the lemon Coke I enjoyed last time I came here.

The saving grace of the meal was the $2 quail eggs, which still kicked butt.

Wonton noodle soup was dominated by sesame oil, and the broth itself lacked flavor or body.

Haha, adding sesame oil is how I cheat at home when I need to cook noodles in plain water and get some aroma at the same time, when I don’t have any stock on hand. If their menu is as big as they were a month ago when I looked at it, they probably suffer a bit from trying to cook too many dishes. Its hard to have noodle soups on the menu without a noodle station and the volume.

How’s the noodle itself?

Traditional wonton noodle soup has noodle on top of the wontons to keep the noodle al dente.

Haha, adding sesame oil is how I cheat at home when I need to cook noodles in plain water and get some aroma at the same time, when I don’t have any stock on hand. If their menu is as big as they were a month ago when I looked at it, they probably suffer a bit from trying to cook too many dishes. Its hard to have noodle soups on the menu without a noodle station and the volume.

How’s the noodle itself?

Traditional wonton noodle soup has noodle on top of the wontons to keep the noodle al dente.

Ha, the menu is pretty small compared to most Chinese restaurants! Except for hainan chicken rice, the remainder of the lunch menu are different permutations of items I posted, for example I think there is a different noodle dish with the roast pork or chicken salad.

The noodles in the wonton noodles were good – – nice snap.

The owner has some interesting plans for the space (e.g., actually cooking the food on the carts!). Wrote about Night Market as part of a story on night market-like (or at least night market-inspired) entities in the Bay Area. It’s a fun spot. 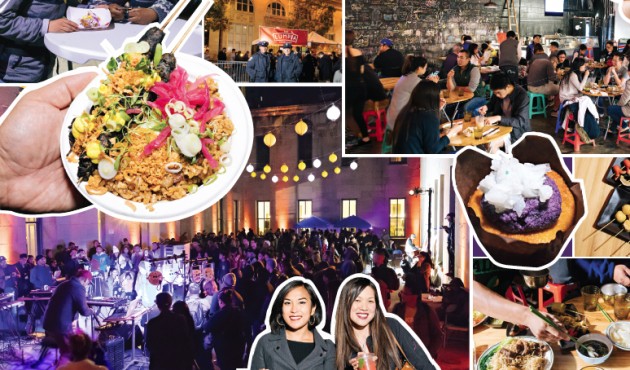 The Power of a Night Market

Looking to Asia’s back alleyways to stoke a new Bay Area craze.

A great article, and it’s good to see you posting here, Luke!

I revisited the curry fish balls, curry pork skin, and quail eggs, and all were as good as previous times. They make all the fish balls in house except for the ones used for curry fish balls— regardless, I found the texture less rubbery, and the curry more aromatic, than the curried fish balls at Cooking Papa. Is a better version of the dish available elsewhere?

What do they use the other fish balls for, noodles? You mean they have people pounding fish by hand into pulp in the kitchen the Chiu Chow way? If so, that’s old style, labor intensive and that’s news! Because you don’t even see fish balls made the old style way often at all in Hong Kong any more. Or some other mechanical means?

How’s the texture of their other fish balls?

I haven’t had their other fish balls, which are for their soup. Next time I go I’ll ask how they make them.

Vien Huong makes their fish balls in house, and they have a less rubbery feel than processed ones. I wish I’d asked about technique! Teochew Noodle Shack doesn’t make their own.

Was going to go today before finding out from Yelp they were temporarily closed until June. What’s happening with them?

From their FB page: 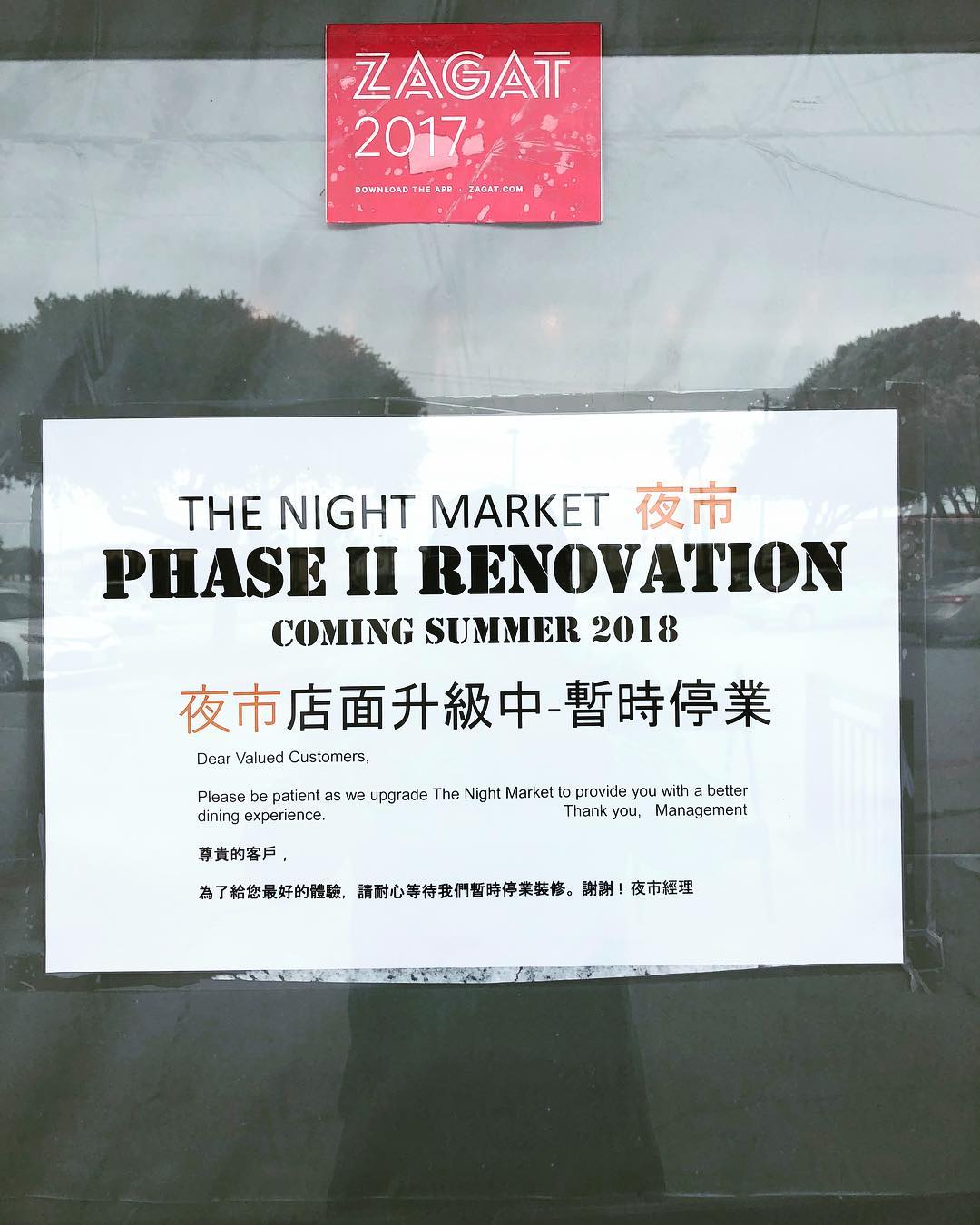 Interestingly if there’s one thing COVID did to Night Market it is to make it more authentic. People are indeed sitting outside in the original dai pai dong in Hong Kong. Spray some water on the ground, make it a little greasy, get some plastic chairs, then the ambiance is all good.

The only thing inauthentic is that the temperatures dip to mid 50s at night or 13 C lol.

I’m glad to see this place around, haven’t gone back recently but might give it a shot sometime soon.

i dopped by a few months ago. i needed to charge a friends tesla so i got some snacks and ate them in my friends car (carefully). i thought the food was identical to as before, which is pretty good. the place was nearly empty but i think it was a weeknight.