Has anyone been to PJ Lee’s in brick lately?

They closed this week after more than 20 years. We only went a few times a year since they were not exactly local but I will miss them. I used to go to the Mongolian in Red Bank often when I had my boat docked in Red Bank but they’ve been gone forever.

Was the Mongolian place where they cooked on a steel drum looking thing? (I think where Red was last occupant) I know my wife used to take me to a place in Red Bank like that, this is going back at least 20 years.

I’m guessing yes… sounds like the Mongolian BBQ place that was in Morristown (Khiva) 20+ years ago! You went down a salad-bar-like line, piled your stuff in a bowl, and they cooked it on a HUGE round flat-top griddle.

Was the Mongolian place where they cooked on a steel drum looking thing?

Yes, that was the place. It was late 80’s-early 90’s in Red Bank. This is what the cooking grill looks like. 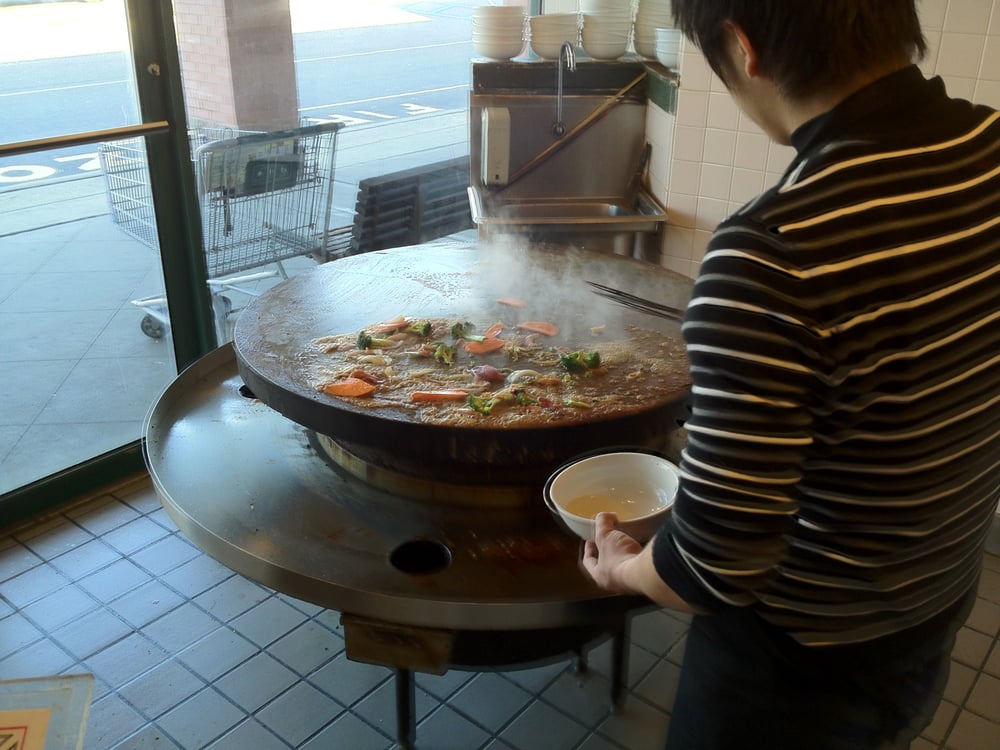 Yep! I never liked it but my wife sure did! We went several times back then and have never seen a place like it since. They should open one using a steel drum so the cook can entertain you while cooking!!! (I get 20% if anyone steals my concept!!)

Something tells me this crab won’t be making it’s way to our local China buffets. How rich is the guy that going to eat this thing? 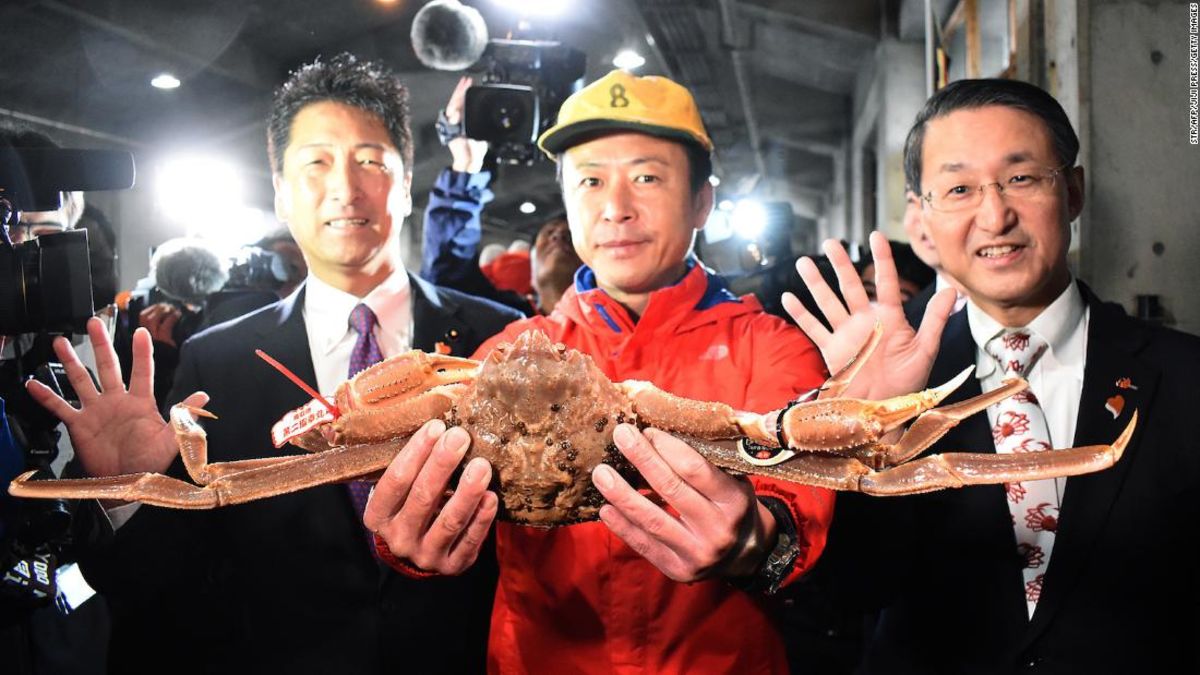 I wish they explained why this particular crab was so special. Was it just it’s size or something else that made it so prized? It doesn’t really look much larger than all the others there…

The crab is going to be a fine specimen. It is big for its kind, but those snow crabs dont get very big so that is as big as it gets. It really won’t be much bigger than ones you can buy locally. The shell and body will be perfect with no imperfections. There won’t be any barnacles or scratches. All the legs will be proportionate and never chopped off and rejuvenated. The legs will be long and the body will be shaped "correctly. " The color will be as light as possible. The claws, like the legs will be fully grown and not different sizes or chopped off at one point. So it will be a nice crab but there will be no way to taste the difference between this and one you pay a few hundred bucks for in Tokyo.

It is all marketing. The national media will cover this and it will bring a ton of attention to the distributor and restaurant, as well as the rich guy who buys it. So they basically pay a ton for a crab/tuna and it is advertising. Some guy like the Japanese Jay Z will buy it. That’s not a real person but Jay z pulls stunts like this.

Some guy like the Japanese Jay Z will buy it.

Please tell me there’s a Japanese Beyonce too!

So for some reason I went last night solo. Thinking to myself alone, I realized how much this place sucks.

Not one dish is really flavorful. Everything is luke warm and the guy that cooks on the grill went MIA after I asked him for a piece of prime rib. He was a latino gentleman and had no idea what prime rib was. So I had to ask in Spanish and then he realized I was talking about the one hunk of meat sitting in front of him on the counter. It looked like it was sitting out all day. The chinese manager saw us talking and he came over and cut me off the end piece. I like medirun rare end pieces but this was medium well, dried out and then flame grilled. I wanted him to cook off any bacteria so I let it go.

So I couldn’t get a stir fry since the guy disappeared.

At the same time I asked for a piece of duck and he take it back and fries it…no joke. I’ve never seen this.

The jus saved the prime rib…barely.

Everything else was meh. I managed to grab some hot fried shrimp out of the fryer. They were by far the best thing I had.

With no butter warmer in tow, I decided I am done with the china buffet unless it’s crab fest. The food just sucks. After sichuan cottage blazing hot dishes bursting with flavor, I sat there dumbfounded at my stupidity. For now no more buffet unless it is crab time and I’m equipped

This sums it up… 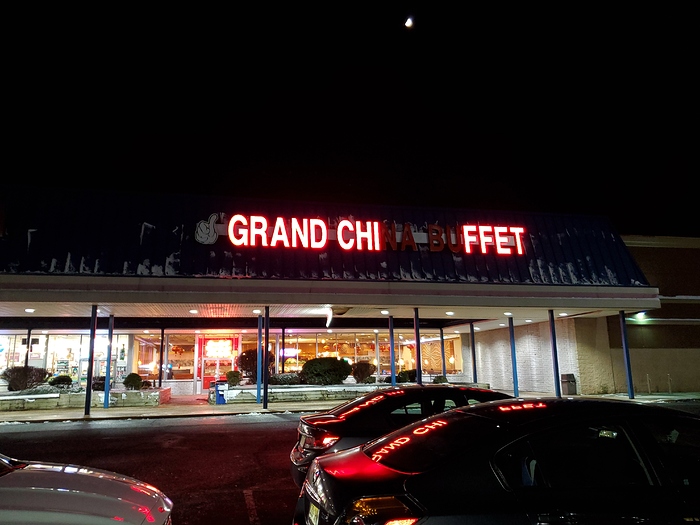 Johnny in fairness why did you go to a Chi Ffet place if you wanted a Chinese Buffet?

This place has been limping along for awhile and it is kind of sad because it used to be “decent”. It has gone from a C to a D for sure. Outside the peel n eat shrimp and the aforementioned fried shrimp (frozen but still dam good) I’m hard pressed to recommend anything else. Honestly as Joon recently posted if you want a genuinely good Chinese Buffet you have to go to Freehold/Manalapan Tapa(something) place.

That’s sad man. It sucks that your PR was overcooked. I think with any buffet, there’s really only like a handful of things worth eating. When I’m at the Eatontown buffet I literally don’t even look at the warm buffet section. All the action happens between the crabs, raw bar and grill station, and if it was unattended like that it would basically ruin it. Did they not have crabs at all?

Buffets are especially terrible once they enter the death spiral, because it basically makes the majority of their food inedible. A place like Grand China Buffet you really need to hit on a weekend when it’s got more people rolling in.

From your description, I thought you were at the HAZLET one until I saw the picture at the bottom.

When I was a child (their heyday was the late 90’s) it was fine. I then didn’t visit again until two years ago. Food was lukewarm and flavorless, but the temperature bothered me most. Their desserts looked like they literally fell out of a bakery truck. For the same price as Teppanyaki, it’s really a joke.

I miss the Middletown location.

I’ve been to the Hazlet buffet a couple times now and it’s not bad for what it is. Lunch is something like 9.50, and I’ll stick mostly to the build your own stir fry section. I go all in on the shrimp and other proteins. No bullshit like rice or noodles. Basically for me it’s all you can eat shrimp for 10 bucks which isn’t a bad deal.

Apparently the stretch of Route 18 in East Brunswick where Teppanyaki Grill is is scheduled for “redevelopment”:
https://www.tapinto.net/towns/franklin-township/sections/other-nj-news/articles/east-brunswick-redevelopment-big-changes-to-route-18-9

" For those residents and commuters who are getting tired of looking at abandoned properties on Route 18 south like the Wiz/Gap Plaza or most stores at the former Loehmann’s Plaza, help is on its way.

This past week the East Brunswick Redevelopment Agency has entered into an agreement with River Development Equities of Red Bank to manage 45 acres of the Redevelopment Zone between Ruth Street and Tices Lane on Route 18 South, extending back to the Lake Apartments."

For those of us who like Teppanyaki, we could do without the help.

Is anyone steering clear of certain things with this virus situation?

Well, I’m not planning a vacation to China in the near future.
If you mean whether I am avoiding Chinese restaurants, no, absolutely not.

I was at H Mart in Edison yesterday, and masks abound were donned.

We went to Chengdu 1 today and it was empty. They said that all of the Asian customers are staying home. They are only getting American customers. They said Saturday night, which is usually packed, was dead. Everyone is afraid to dine out.