I’ll do some research late tonight on Modesto, Turlock, and Tracy for specific restaurants to vet from y’all. In the meantime, do any places in that vicinity jump out as characteristic and/or unique to those areas, and distinct from what’s available in the SFBA? Any strong Basque recommendations?

We’ll be feasting on Armenian food in Fresno, so cross that off the list as an option!

have you tried Wool Growers in Los Banos? might be out of your way though. I haven’t been there in many years so can’t say how it is now.

Here’s a segment from the California Report by Sasha Khokha on Wool Growers:

That’s too far out of the way for this trip, but I’ll put a mental note for that the next time I go to Los Angeles!

When I go to Fresno from the Bay Area, I like to stop at Papa Urb’s Grill in Tracy. It’s a convenient location, right off the 205, and I can usually grab a table.

I like the Shanghai lumpia, sisig fries, lechon kawali, adobo, and tocino. Everything is so rich that I usually only order one of these items. I’ve also had the Papa’s breakfast, which is tocino, longinsa, and fried egg served over rice. I think that also comes with a salad with a mayo-garlic dressing. Yeah, it’s not health food.

If halo-halo is your thing and you have room, their version is good.

I also tried Saigon Restaurant off of Naglee Road. Mediocre pho, but I wanted something a little lighter that day.

Los Banos is actually on the fastest route (by 3 minutes) from SF to Fresno. That’s the way we used to go when I did field work down there. We’d stop at Los Banos and my colleague would go to McDonald’s while I would hit the taqueria next door (saving our per diem for Fresno). That was decades ago.

The best Basque was in Fresno at the Santa Fe Hotel. It was/is right by the railroad station. My coworker was a railroad nut, and one time while we were dining there he heard a train whistle just before the dessert was served. He leapt up from the table and bolted out the door to watch it pass, startling the waitstaff who immediately looked at me to make sure I wasn’t following him.

If you are going through Modesto, I’d consider a side trip to Riverbank for a taco and a beer and paying homage to the Brown Buffalo. 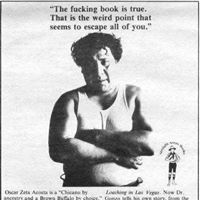 GONZO honored in Riverbank Ca . Where he grew up... RIVERBANK — Oscar Zeta Acosta — hero to the Chicano movement, hard-living pal of Hunter S. Thompson — first raised hell in Riverbank. He grew up...

Two small changes of plans for the ride there: Armenian is back on the table and nothing that would be too crowded on a Friday night ( i’m getting pressure to speed this trip up, and would be willing to expand my scope to something like a good burger, but not tacos, to combat my companions suggestions of fast food )

Sadly the Basque situation in Fresno has deteriorated over the years.

The old Santa Fe Hotel at the Amtrak station is now the Shepherd’s Inn, we haven’t been in years.

Santa Fe Basque has moved to 3110 N. Maroa, just south of Shields Ave. It’s decent and would fill the need for a fix, but again it’s been a few years since I’ve gone for lunch.

The Landmark is undergoing renovations into more of a bar/nightclub scene in the Tower District, which no longer is our go to place.

Our all time favorite has been the Old Basque Hotel on F Street. A couple of years ago, iirc, the owner passed away, and I thought they’d closed the doors for good. I see that Yelp does not have a closed banner at the top but the most recent post is over 2 years old. Definitely give a call first. If in fact they are open our favorite item last visit was the fried chicken with garlic. 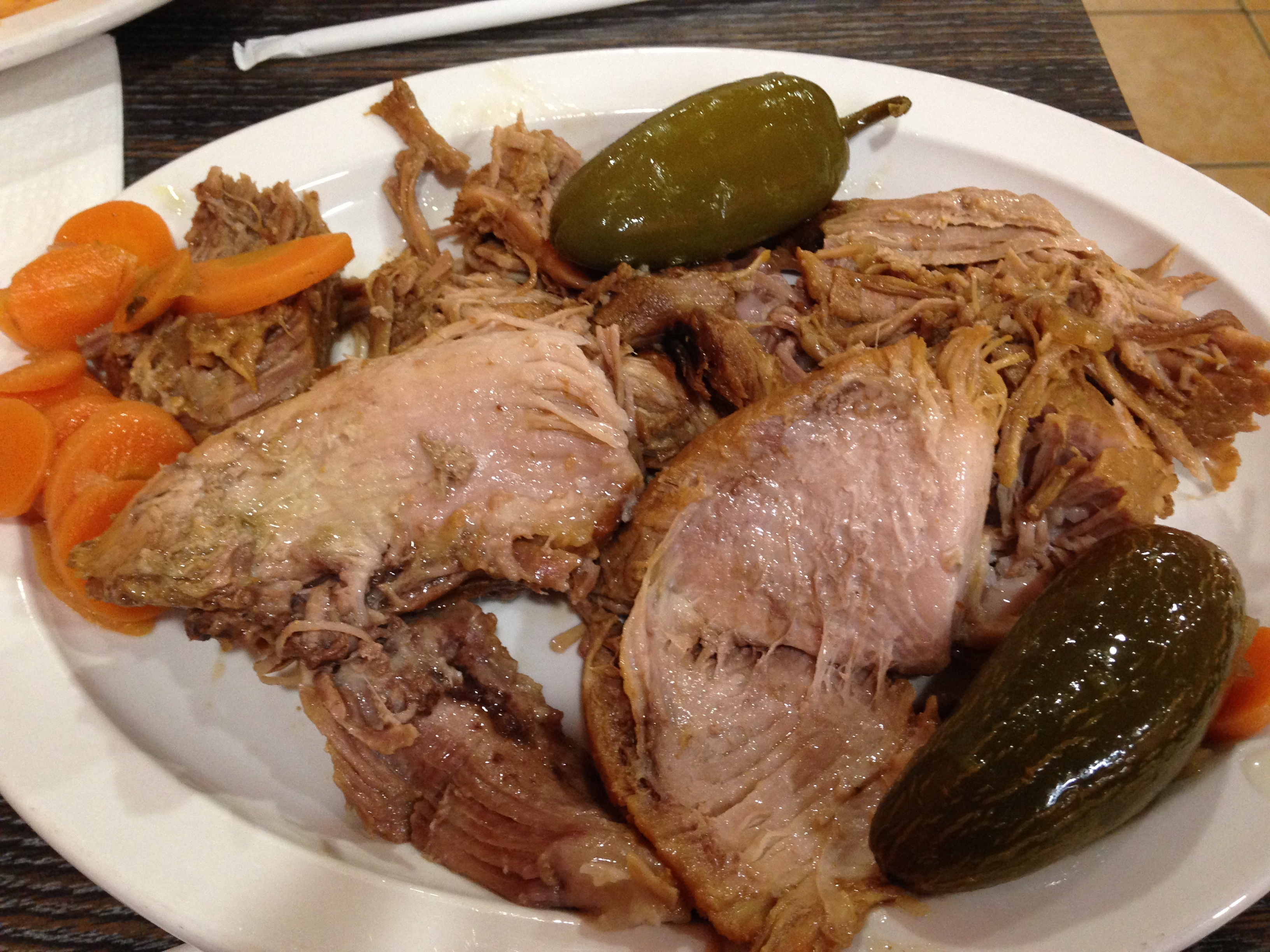 We had an excellent meal at Carnitas Michoacan in Ceres tonight. The 1 lb carnitas plate came with chopped onions, cilantro, carrots and jalapeño escabeche, a stack of tortillas, and rice and beans. The carnitas held their shaped, and pulled into fibers easily with a fork. Juicy, delicious, and lardy tasting. The tortillas are handmade from fresh masa. Killer house salsas.

Inside the Chevron gas station in Ceres is Little Mexico City, which is been open since the beginning of 2018. Huge handmade Huaraches (stuffed and topped with beans) and tortas. They also have burritos. I enjoyed an agua Fresca, but regretfully didn’t eat anything. 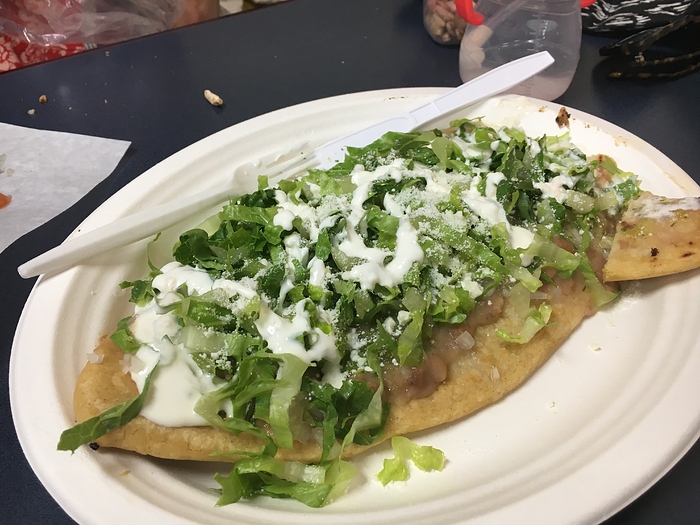 There’s a huge Oaxacan population in Madera, someone told me 15,000 depending on migration, including three restaurants. I wish I’d known about Colectivo Sabor a Mi Tierra , but only saw Lisa Morehouse’s article after my visit.

I did go to Oaxaca Restaurant Madera, which was better than the scarce Oaxacan restaurants I’ve tried in the Bay Area 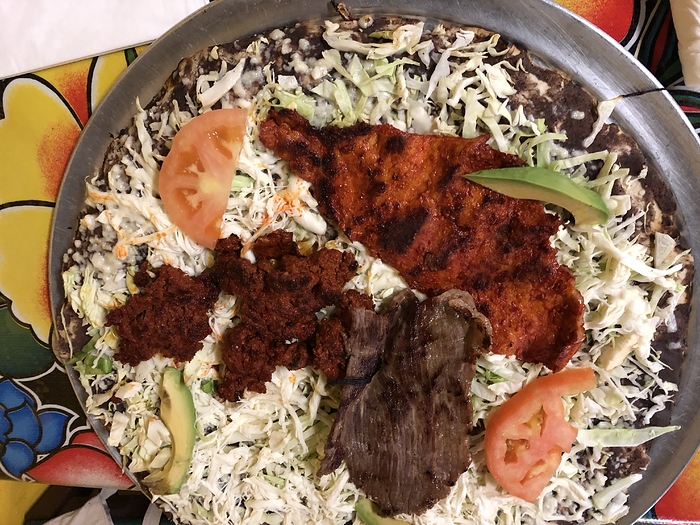 Clayuda Mixta with Tasajo, cecina, chorizo, quesilla (string cheese). The shredded cabbage picks up all the meat juices. Chorizo was great, and was spiced differently than I’m used to. Heh, cecina was spiced like the chorizo I’m used to. Obviously they make the meats there, but I believe the clayuda/tlayuda itself is purchased elsewhere (the 2nd Oaxacan Restaurant in town, Sazon Zapoteco, sells ones made in San Diego, and had red mole I preferred of the two restaurants). 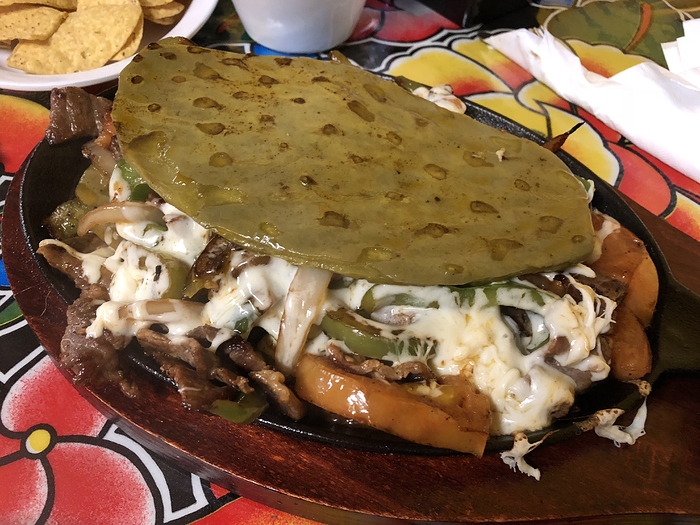 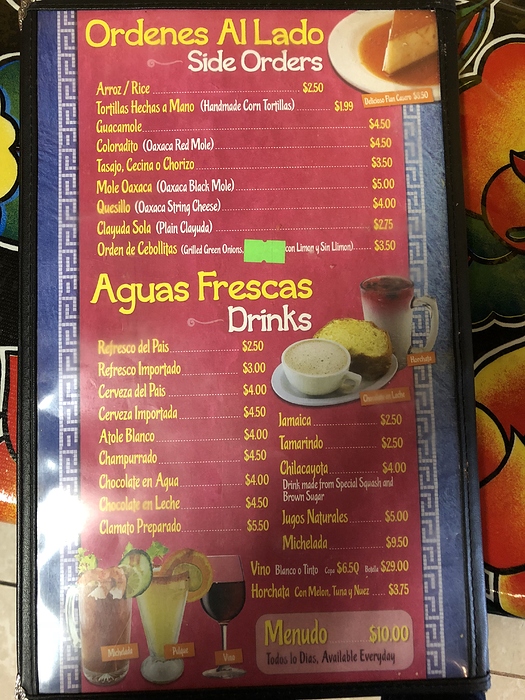 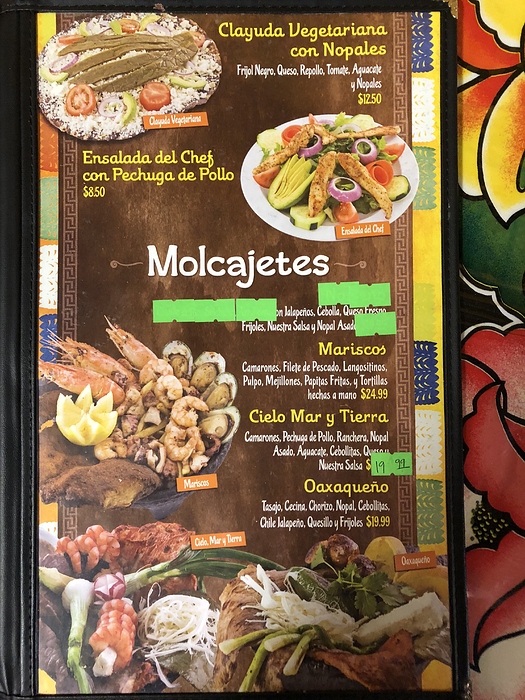 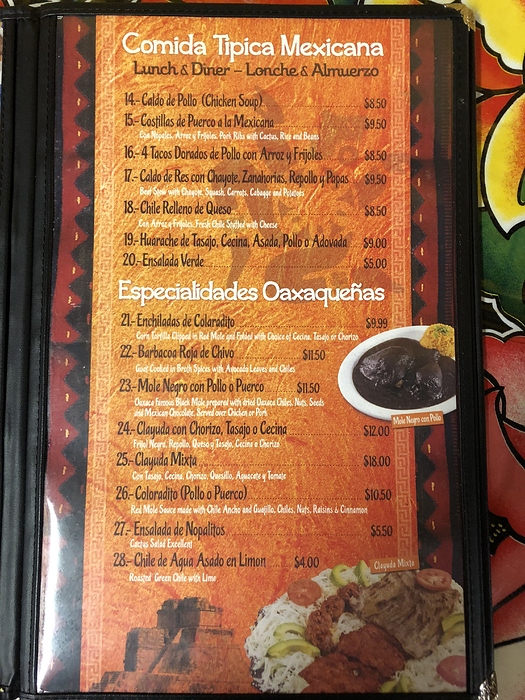 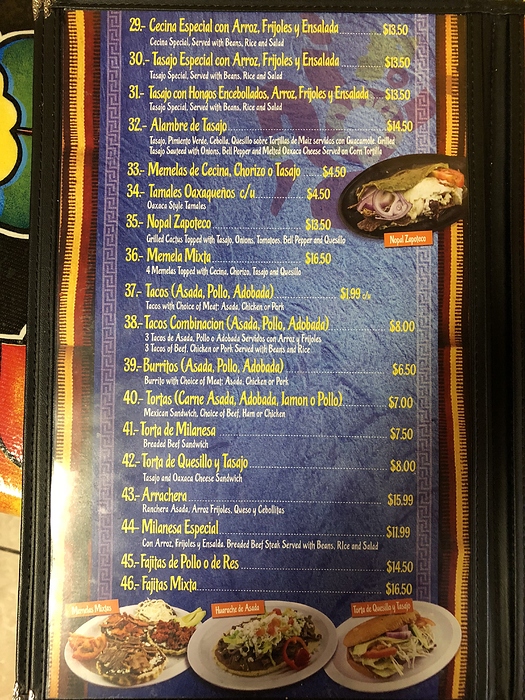 Now that’s a find! I wish I saw that before I went on my trip. Hopefully I can try it on my next trip.

I tried a lot of Mexican taco shops on my last trip and off the record they were ok, that’s why I’m not reporting on them. I want to do Central Valley proud, last thing I want is 15, 000 angry Oaxacans PMing me. But the elusive taco evades me. 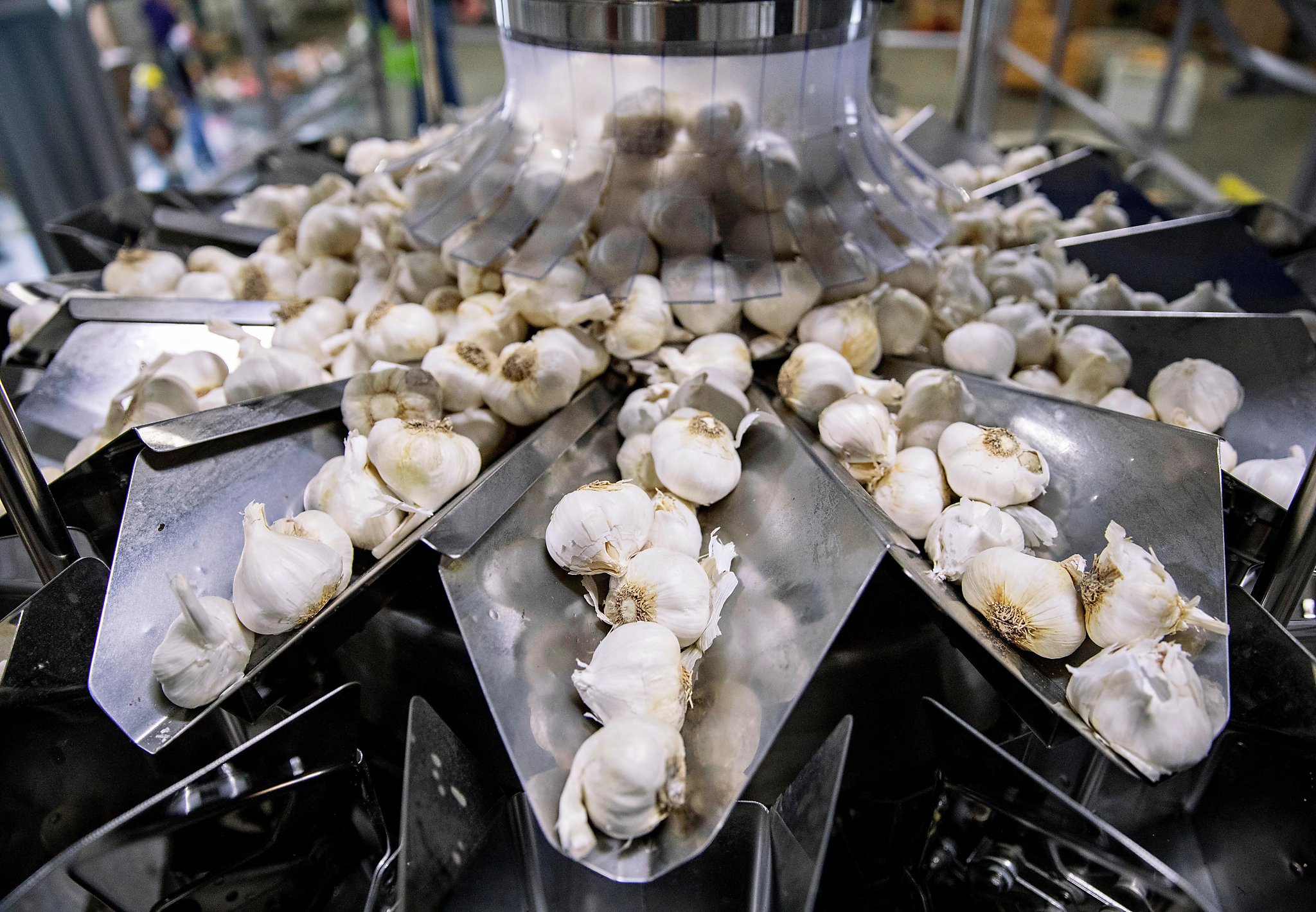 There will be garlic fries and garlic breads, garlic roast corn and garlic spreads. You'll find garlic chicken and garlic jams, garlic ice cream and maybe garlic ham. But you will not find any of this at Christmas Hill Park in Gilroy on May 28. To...

Things get even saltier lower down the page: “FRESNO IS THE TRUE GARLIC CAPITAL OF THE UNITED STATES - NOT GILROY. FRESNO COUNTY grows many times more garlic than any other county in the United States? It’s a fact!”