Their Facebook page mentions biang biang noodles (Che mian, torn noodles), Xi’an style burgers, dry pot and hot pot. The five types of burgers including a vegetarian one. Has anyone checked it out?

Huh, that looks intriguing. Thanks for bringing it to our attention!

Went last night. We had the Spiced Beef Burger (Rou jia mo 肉夹馍) Cumin Lamb Hand Pulled Noodles and Spicy Veggie Iron Pot.
The Rou jia mo was not to my liking the Bread was kinda damp and textureless , perhaps low quality flour? It seemed premade to me so I asked and was assured it was made in house. They explained that there are a couple of different ways of making them. I was comparing to the ones that I had had at Terracotta Warrior.
The other two dishes were very good.
The Szechuan Pepper used in the Iron Pot was the most aromatic and pungent that I have every had. Really beautiful Citrus-Pine Scent and flavor. Perhaps the Green variety. Nice mix of Veggies Lotus Root, Bamboo Pith, Pressed Tofu, Celery, Cabbage etc…
Noodles had a lovely chew to them Topping could have been a bit more pungent but still very good.
Staff was super friendly and interested in our impressions especially the young Man who seemed to be coordinating everything
There a couple of negatives about the space, though they will wane with time.
No hand held Menus yet
Varnish on the homemade Tables stinks like Solvents
Plastic Glasses also off gassing ie Water tastes horrible
We will be back, but with our own Water Container

I stopped by in a hurry for a takeout lunch and got the Cumin Lamb “Hand Pulled” Noodles. The noodles were very thin and certainly not hand pulled, though I could believe they were put through a noodle sheeter and cutter in house. Mine were fairly soft, and stuck together. The dish was sauced with chili oil and garlic, cumin flavor on the lamb was noticeable, but not very strong, and some cabbage, onion, and green peppers were thrown in as a vegetable element, but the bowl was mostly noodles with very little cumin lamb. 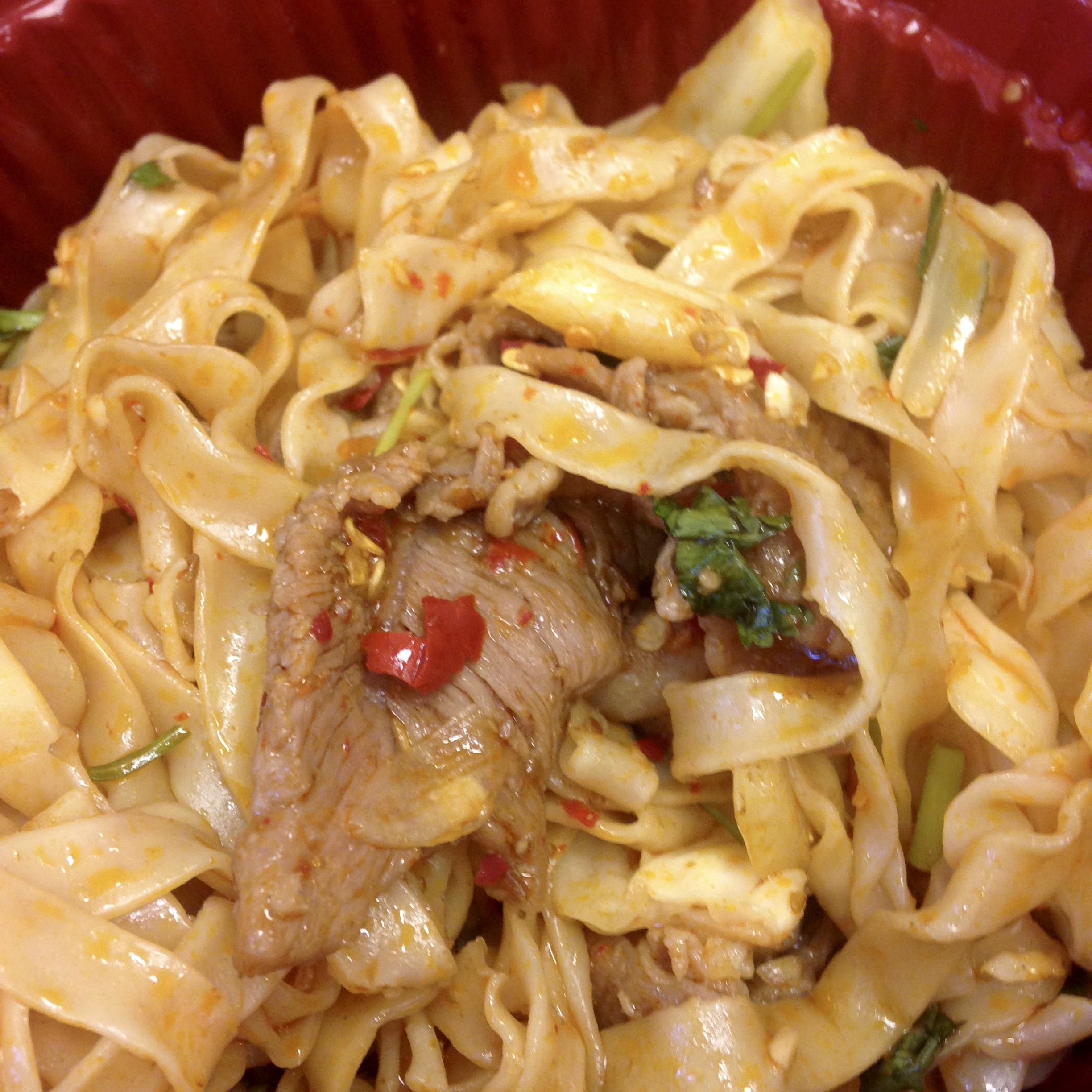 758fda908f5d060478c4533c339596144977d9c0.jpg2448×2448
The signboard menu and graphics had the feel of a chain, or something intended to be a franchise, though, as BierMonk mentions, the dining room had the feel of a place hastily put together after a trip to Ikea, with tables recently and not too carefully stained.
Most of the students in the dining room seemed to have ordered from the “Iron Pot” (individual alcohol flame) section of the menu. The braised pork belly one looked pretty good. I watched the kitchen for a bit while waiting for my order. They were heating up rather large (at least 6 inch diameter) rou jia mo on the griddle from a bag (that they could have made earlier in house), had a giant stockpot going on the stovetop. They are definitely still in opening days, and I’ll likely be back to try an iron pot and bao when available, but I was not yet impressed.
hyperbowler June 8, 2016, 2:58am #5

the Bread was kinda damp and textureless

What’s the ideal for this type of bread in Xi’an? I’ve only had these locally, and they’ve ranged from bisquick tasting, to benign, to ciabatta-like in flavor / loft, to hockey pucks, to an actual English muffin I saw on Yelp.

After looking at their facebook page, I’ll note that the noodles they’ve pictured look nothing like what I was served. It’s possible they ran out of the “hand pulled” noodles and substituted some commercial noodles, or just that the pictures aren’t representative, but there’s no way the noodles I was served weren’t rolled through a roller on thin setting and machine cut at ~1/4 inch. They didn’t even have the ruffled edge the dried “knife shaved” noodle product does. They were relatively long, though–probably over a foot, though it is difficult to say because they were somewhat stuck together such that I don’t know that I ever pulled out a whole noodle without breaking or biting it off.

I have never been to Xi’an so can not answer your question. As I said in the post " I was comparing to the ones that I had had at Terracotta Warrior."

I agree the Noodle are machine made. Should have mentioned it to the Guy I asked about the “Burgers”.
He said that they make the Bread in house and that it is done ahead and re heated.

More info about the new restaurant, started by a recent Cal alum.

Luke Tsai has a review in the East Bay Express. I’m excited to hear that one of the owners was a recent chef at Z&Y.

Regarding @tm.tm’s comment that the noodles didn’t seem hand-pulled and/or were machine cut, the owner told Tsai that they make the “noodles by hand in-house” and Tsai notes that “[t]hese were long and crinkly with a nice chew, though they were thinner than most fresh, hand-made noodles I’ve had, and weren’t nearly as wide as other biang biang noodles I’ve seen.” Noting the run around I’ve experienced when inquiring how places make their hand-pulled or hand made noodles, I wonder whether Tsai’s wording is a veiled skepticism about what aspects of their noodle making are as advertised. Generally, I don’t understand why restaurants with hand-pulled noodles don’t fill their Facebook/web pages with videos of the chef’s talents— that’s cool stuff to watch and doesn’t reveal any technique not shown on thousands of Youtube videos.

Famous Bao’s kitchen is virtually “live”. and small. one could see if hand pulled noodles are actually made.
wasn’t paying attention. informed by associates noodles are the dry kind.
fyi. my lamb burger bun tasted more like a coarse muffin than chairman’s bao.

The roujiamo bun isn’t supposed to taste like a guabao. It’s pan-fried as opposed to steamed. They generally are somewhat like English muffins, but denser.

thanx for illustrating what a roujiamo bun looks and taste like. have eaten only a few so far.
my comments were meant to contrast a roujiamo with the omnipresent chairman’s bao.
actually neither one fits my fancy.

Was David Deng there? Were there any signs of “New Management”?

I’m not sure if he was there. Since our last visit several new items were listed on the menu. That was the main thing we noticed that was different. Everything we ate was excellent.

Acccording to the guy at the counter, the noodles are pulled off site.