Mom’s birthday tonight and she just wanted to stay in, so we got takeout from Esposito’s. We had not ordered from here a while and our last visit (the start of this thread) was two years ago. She loves their Bolognese, so she had that with rigatoni. BF had a calzone with pepperoni and black olives. I had Chicken Murphy. The hot peppers gave it a nice zing, but would ask for spicier next time. Pasta AND potatoes together. Carbs, carbs, carbs!

Only pics of my dish. Huge portion. I’m almost embarrassed to admit I polished off the whole thing…and lots of bread. The downside of a garlicky sauce. 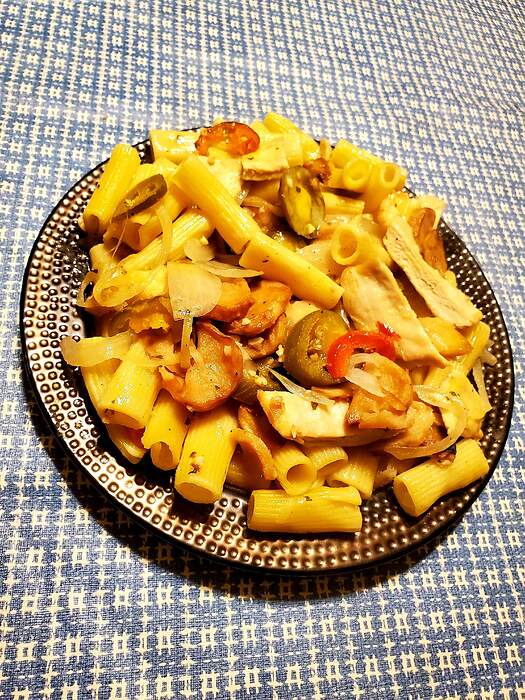 As Covid changed the way we do takeout (we literally just do pizza, Chinese, and Indian now because Italian dinners and pizzeria sandwiches always end up just mediocre and Justin and I can cook almost anything better anyway), I was skeptical, but I ended up really enjoying my dish. The pasta was VERY al dente but I’d rather that than mush. Both dinners came with salads and bread.

When picking up, they had a decent crowd in the dining room. Their new location (the old Matawan Insane Asylum, err, excuse me, Pride of the Sea) is nice but very bright. Couldn’t imagine dining there with multiple glasses of wine and sitting in such a bright light. But we eat out so rarely now anyway. Would do takeout again. Prices more than reasonable.

Are they still doing the drive up takeout thing? One of the few covid conveniences. Glad you all enjoyed your meals.

Their new location (the old Matawan Insane Asylum, err, excuse me, Pride of the Sea)

Actually, their “new location” is about 10 miles south on Rt. 34 in Colts Neck - the old Thai restaurant across from Delicious Orchards is their “newest location”. Looking forward to giving them a try.

I meant if they still do the drive up takeout. It was great. You don’t even get out of your car. Super helpful with kids!

I believe most places have done away with curb side delivery. You have to go in to pick it up.

I’m not sure but I don’t think so. They do have a separate side entrance for takeout pickup, though.

Does anyone know what’s going on with their old location (diagonally across the intersection, where the original Peter’s Fishery used to be)?

I’ve only ever been to the Manasquan location and they have discontinued bringing your food out to the car. In addition to eat in, they do pick up and delivery though delivery usually takes at least double the time, even factoring in drive time for me.

@NotJrvedivici I’ve seen the “Coming Soon” sign in front of the ex-Thai restaurant a number of times and thought you were wrong that it’s the “new” location for Esposito’s. But in case my memory was faulty, I didn’t want to say anything until I checked the sign again. Just got back from Delicious Orchards. Checked the sign and, indeed, it says Via S’Posito not Esposito’s. So it appears it’s an entirely different restaurant.

Hmmmmm now I can’t recall how I became of that belief however I may stand corrected. I’m going to assign my top Captain @seal to head up an investigation for the culprit!!! Seal, you have my orders…………Oh one more thing……bring them to me dead or alive.