Dish of the Month (DOTM) for HOUSTON, January 2016 is PASTA 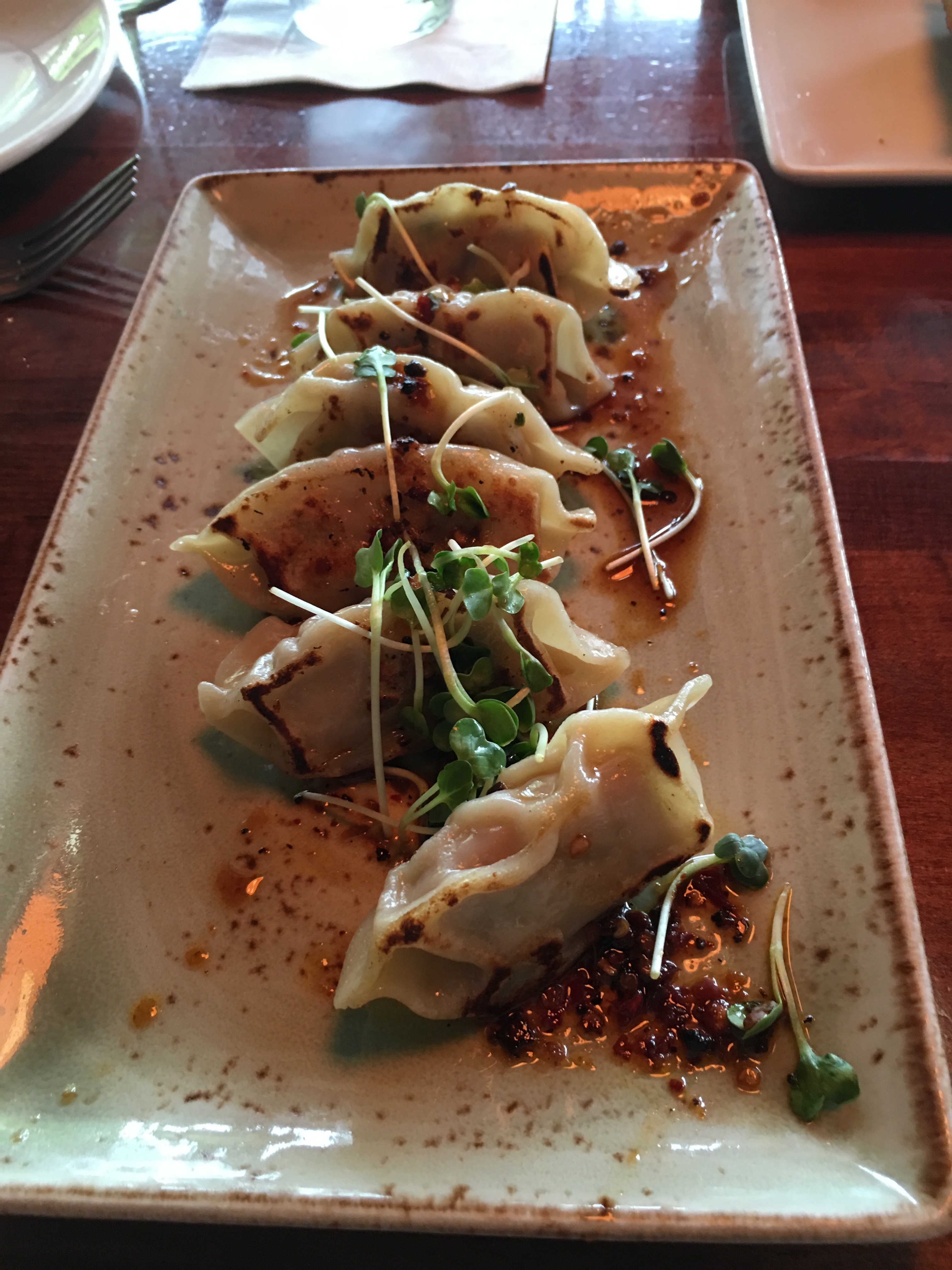 Why non-wheat based noodles? Asking because only rice noodles will remain as the major non-wheat option left.

If you are open to wheat, you’d want to check out these two comprehensive threads on Chinese noodles types (just ignore the restaurant mentions since they are for the SF Bay Area):

Yeah, thanks. I’d seen those and though I haven’t read them through I’ll probably refer to them.

As for the non-wheat based - I was basically just thinking out loud or thinking at the key board in this post. I do have in my pantry from Hong Kong Market, a Super Walmart sized grocery store in Chinatown, some Korean Buckwheat noodles (the label says they do contain wheat) and some sweet potato noodles - di gua fen si - ingredients just listed as starch and water.

Maybe we should think about a get-together. Mamak would be a possibility. This could be one like last month where you can order anything off the menu, not just something related to the DOTM. What do you think?

I’m going to try to get over there in the next couple of days and will report back.

Oh, dear. Well, if it’s any consolation, the presentation is more appealing than the frozen ones I finished off at home last week! Got 'em at Super H Mart but can’t remember the brand.

You know, PF Chang’s food is actually very good for the most part. The salt and pepper shrimp is my favorite dish there.

I’ve never been. Did go to Pei Wei once; they’re co-owned but I don’t know how the menus compare.

Your picture made me hungry… 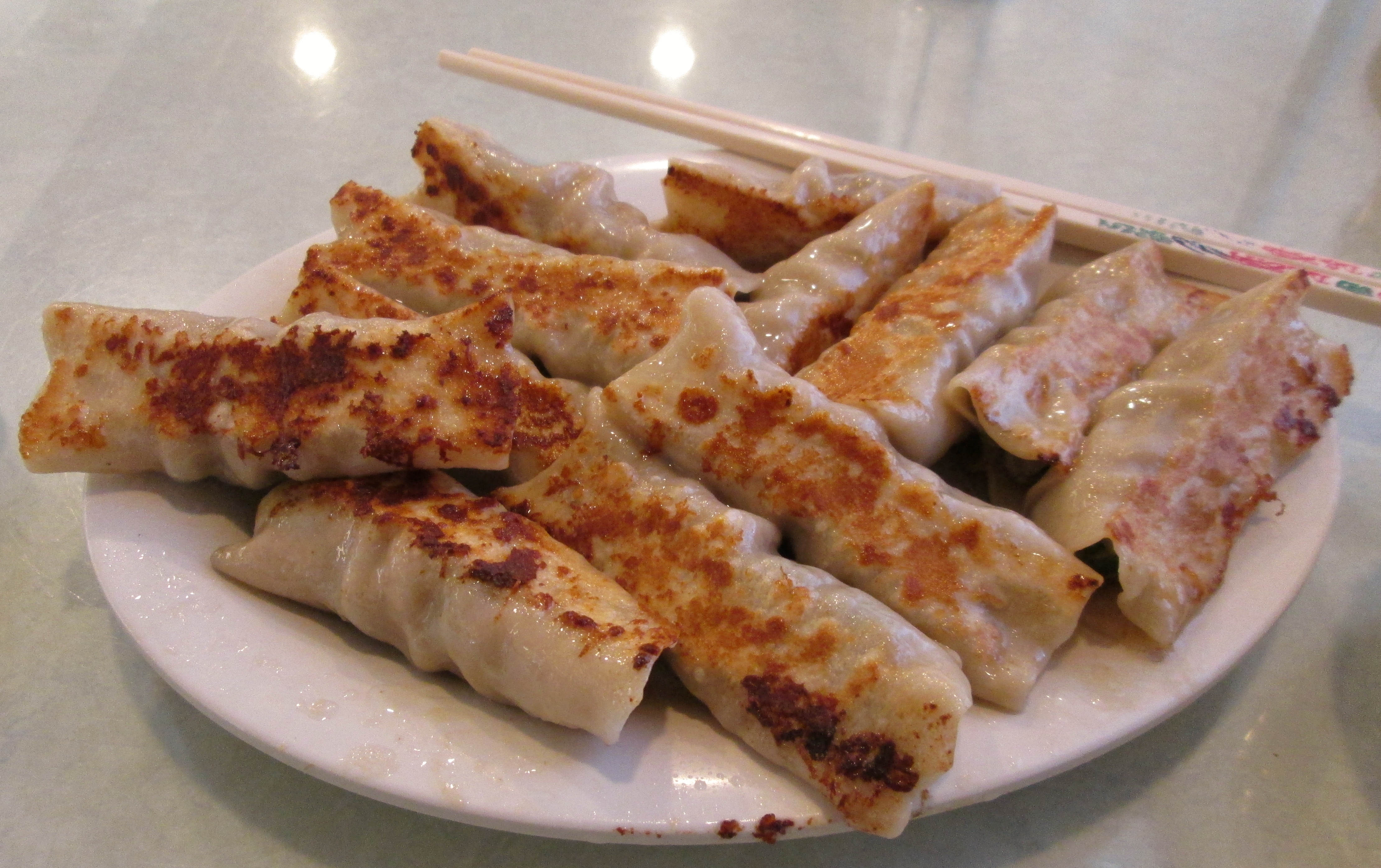 …so I headed over to San Dong Noodle House for some fried pork dumplings with leek. I haven’t been here in a long time. When I first went years ago it was being touted by other Hounds as the best in town. I understand there’s been an ownership change and the counter lady that some found intimidating wasn’t there today; in her place was a very friendly older gentleman.

It’s counter service, cash only. Pick up a cup and some water, utensils and a bowl to mix your dipping sauce in with the condiments on the table.

May have been some change in the food, I’m not sure, but they’re still very good. I’m not sure there was the choice between leek or cabbage before. I think I might have liked the cabbage better than these.

It’s a very small menu; 20 items in English plus a small Chinese menu of about a dozen items.

The other item that was always highly recommended was the beef noodle soup and I always used to get both but I’ve been needing to cut way back after over-indulging through the holidays. I didn’t even finish all twelve so I’ll have a great bedtime snack or breakfast.

Those look delicious! Different shape. Do they serve drinks other than water?

I still want a meet up in China Town.

Didn’t have yesterday but I think I remember having tea there before. My memory is slipping away.

Looking at Yelp reviews/pictures, there’s a pic of the current menu plus some previous ones - there have been changes. The pan-fried pork/leek dumplings are new and prices have edged up over the years. I thought I was remembering the first time I went I got the dumplings and soup for right at 10 bucks. Dumplings yesterday were $6.50. So maybe my memory isn’t completely gone.

Lots of good reviews on Yelp and good pics. Also see on Yelp you can buy frozen dumplings to take home. I looked at all their ready-to-go items but didn’t see them. They’re probably better than any you’re going to find at a grocery store.

This would be a good place for a small meet-up. Small menu but lots of good choices. I’m up for that.

I made it over to Mamak today after a failed attempt to get into a jam-packed Uyghur Bistro. I’ll try again there on a weekday.

Mamak has been open for several years now but this is my first visit. It’s a larger, more spacious room than Banana Leaf I right across the parking lot and I didn’t get any of the attitude servers at BL have had toward non-Asian customers. 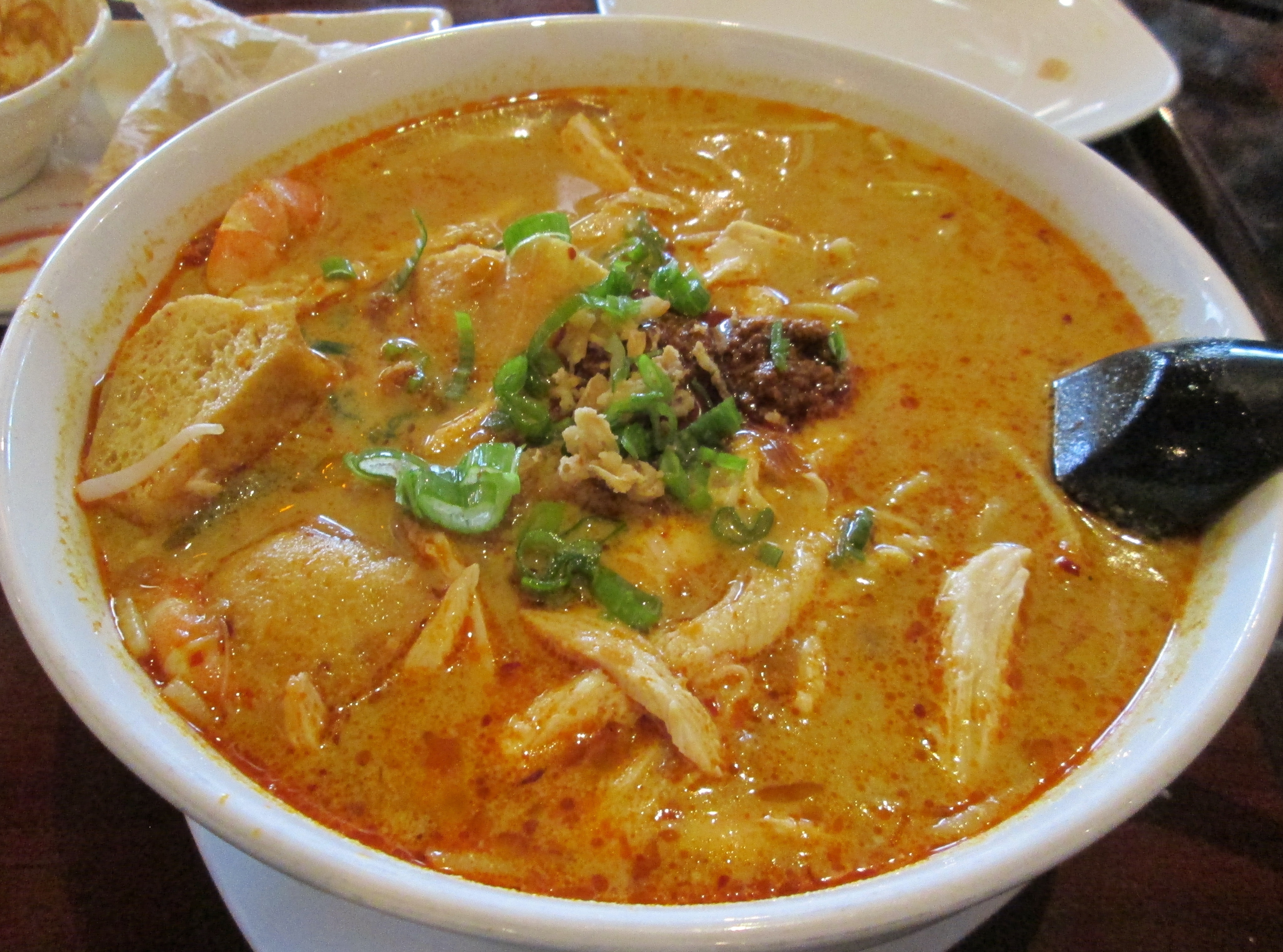 I had the Singapore Laksa Noodle Soup with noodles, shrimp, chicken and pork along with fried bean curd and vegetables. A pleasant surprise were crisp bean sprouts.

The only thing I have to compare this to is the packaged product mentioned above. All the flavor notes I expected were present but surprisingly that soup was creamier and richer. That was one of the amazing things about it. Of course any shrimp, chicken or pork in it would have been freeze dried. Also I’d have to say the noodles in the packaged product were better; there was nothing stand-out about these noodles to me. Still, it’s very good to know there’s a place to go to get the dish.

I may come back for the Stir-Fried Flat Noodle (Chow Kueh Teow) for this thread but I’ll pass on the Roti Canai. The version here was a leathery pancake with an uninteresting chicken and potato curry for a dipping sauce. And I’ll probably get around to trying BL’s version of this soup.

Malaysian cuisine hasn’t done well here for some reason. Several of the places I’ve been to are gone including the very short-lived Nyonya Grill in Sugar Land that was probably my favorite. I am glad Banana Leaf and Mamak have survived.

Now, where are those pictures of pierogies??? I’ve been salivating for 4 hours!

BTW, I discovered Eddy’s when it was on sale at Kroger once and found it to be the most delicious sausage, and this is a sausage lovin’ household. Those look yummy. So do you still indulge in pierogies at Polonia after having those???

Eddy’s is good stuff. I think I first came across it at Foodtown; I don’t have a Kroger near me so don’t shop there often. There’s several good sausage makers/butcher shops/smokehouses in the Czech-German belt stretching out toward Central Texas.

Note to all: I plan on hitting up Uyghur Bistro and Cooking Girl, the new Sichuan place in Montrose, for some noodles for this thread. If anybody wants to meet up, PM me. This would be for weekday lunch. Weekends are probably going to be packed for both.

Are these what you’re seeking? http://www.amazon.com/Prima-Taste-Laksa-Mian-185g/dp/B00B5NOQ74

Yes that’s it. Thanks. Never would have thought to look as I always assume I can find anything I need or want locally. Alas, I’m not into buying in bulk like that - I like variety too much - but I’m sure I’ll find it here someday; meantime there’s more good stuff to try.

Cost Plus / World Market appears to carry it.

Excellent! That’s probably where I found it. I remember going there a couple of times last year and I always browse the small International foods section. Maybe they’ll have some of those other Malaysian/Singaporean varieties that were rated so high by Ramen Rater.

Lambowner - I go to the one on Richmond @ the Loop but I see there’s one just off I-10 on Yale.

plan on hitting up Uyghur Bistro and Cooking Girl, the new Sichuan place in Montrose, for some noodles for this thread. I

I’m up for that, I’ve not heard of either of these places. But I am close to Montrose so let me know if you pick a date for this.

Just a block from Cuchara. I think it’s a mother/daughter operation - seems like I’ve read that.

Hot Diving Fish has been raved about by several on YELP. I wonder what Three Flavor Rice Noodle in Casserole is but I wonder even more what Broken Heart Jelly is. I didn’t see any pictures of either of those on Yelp.

I think it’s packed a great deal of the time and very limited parking, of course. I haven’t driven around to see what neighborhood parking options are like. I was thinking Monday or Tuesday would be better and as early as possible. When can you get away for lunch? They don’t open until 11:45 on weekdays so I bet it’s packed from the get-go.

ETA: Found a couple of pictures of Broken Heart Jelly on Yelp by scrolling through all of them. Pictures don’t help. Appears they have several off the menu specials. The ‘Organic Dumplings’ look interesting.

Looks pretty small in the pictures. I can’t find any statement of capacity. Four parking spaces in front, 4 or 5 on the side.

I could arrive early to hold a place if there’s a line. Back-up plan could be to go to Mala Sichuan next to El Real.

I PM’d you about a snag in the scheduling.

Anybody else care to join Lambowner, et. al., and I at Cooking Girl PM us for details.