yes. walk -ins can be seated at the bar with a shorter wait time

That is ridiculous IMneverHO!!! They’re good. They’re really good. But buying a res for something like that. Cuckoo.

A credit card is needed now to hold a reservation. Note the policy:

If you need to cancel your reservation you may do so 24 hours in advance. If you cancel inside 24 hours we are authorized to charge a $10.00 fee per canceled guest.

Over ten years ago three of us agreed to meet for a weekday lunch at Harbor Village. Two of us found each other at the Four Embaracdero escalator as the third was coming down saying, “It’s gone!” “What do you mean?” “It’s gone.”

After surveying the demolition site and heading out Sacramento Street to R&G in silence, one of us announced the verdict, “All the kids must have finished medical school,” not wanting to contemplate the commercial real estate market.

Thanks to sck who allowed me to take over his reservation! When I arrived shortly after 10am (they open at 11) on a Friday, there were already about a dozen people in the line for the bar, which they said had 16 seats available. Separate line for those with reservations. They did check my ID. Of the 3 items I ordered, which some have raved about (pork xlb of course, pork shrimp shumai, pork shrimp wonton in hot sauce), I enjoyed the last, the others were somewhat bland and i found the meatballs inside to be a bit dense for my taste. Both the xlb and the shumai had soup inside, but not as much as some places. The wrappers of course were excellent in terms of thinness, elasticity etc. Only been to one Din tai fung before (Arcadia ) and it was long ago, but this one didn’t seem to measure up to those memories. maybe I’ll wait until the frenzy dies down before going back, given the effort required to make reservations at midnight, drive down there etc. Thanks again sck! 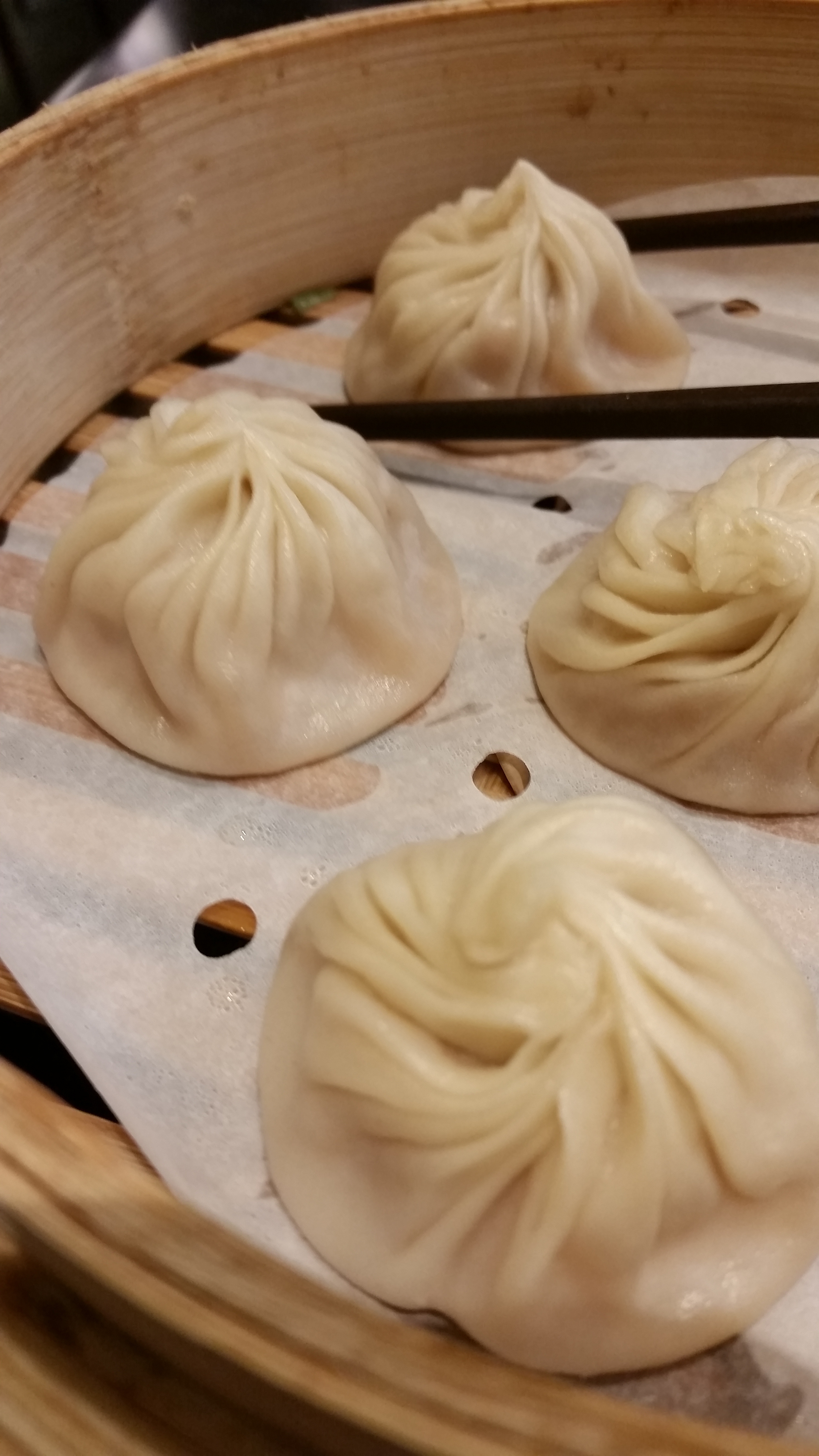 No problem! And thanks for the report!

How would you compare their XLB with the better versions in the Bay Area?

A little odd that they are a little off on the XLB. I guess its intentional…

I have not tried any xlb in the peninsula where I gather there are some good spots. Personally I prefer a softer meatball and more juice such as at Yank sing or shanghai house (sf), although the latter is a bit sweet. Crystal Jade (sf) used to have good xlb but I haven’t been for ages. I wouldn’t dare to question Din tai fung, but just say I prefer a slightly different style

I learned of the reservation system pretty early and managed to snag reservations for this past Saturday and Sunday night. Dim sum is always a game of which dish is going to be awful, so it was a delight to have two meals of small plates, with most dishes above-average to awesome, and no complete duds.

Vegetable dishes (mustard greens with ginger, Chinese brocoli, kale with garlic, and fried string beans) were all excellent. Bright green and crisp. The string beans had more seasoning on our first night.

My favorite other dishes were the taro bun, the chicken dumplings, The pork chop noodle soup (clean, chickeny broth with what is essentially Chinese schnitzel ), The beef noodle soup, and the shanghai rice cakes with pork. The noodles with minced pork sauce and the noodles with spicy sauce had good noodles, and good sauce, but the sauce had a hard time adhering to the noodles. 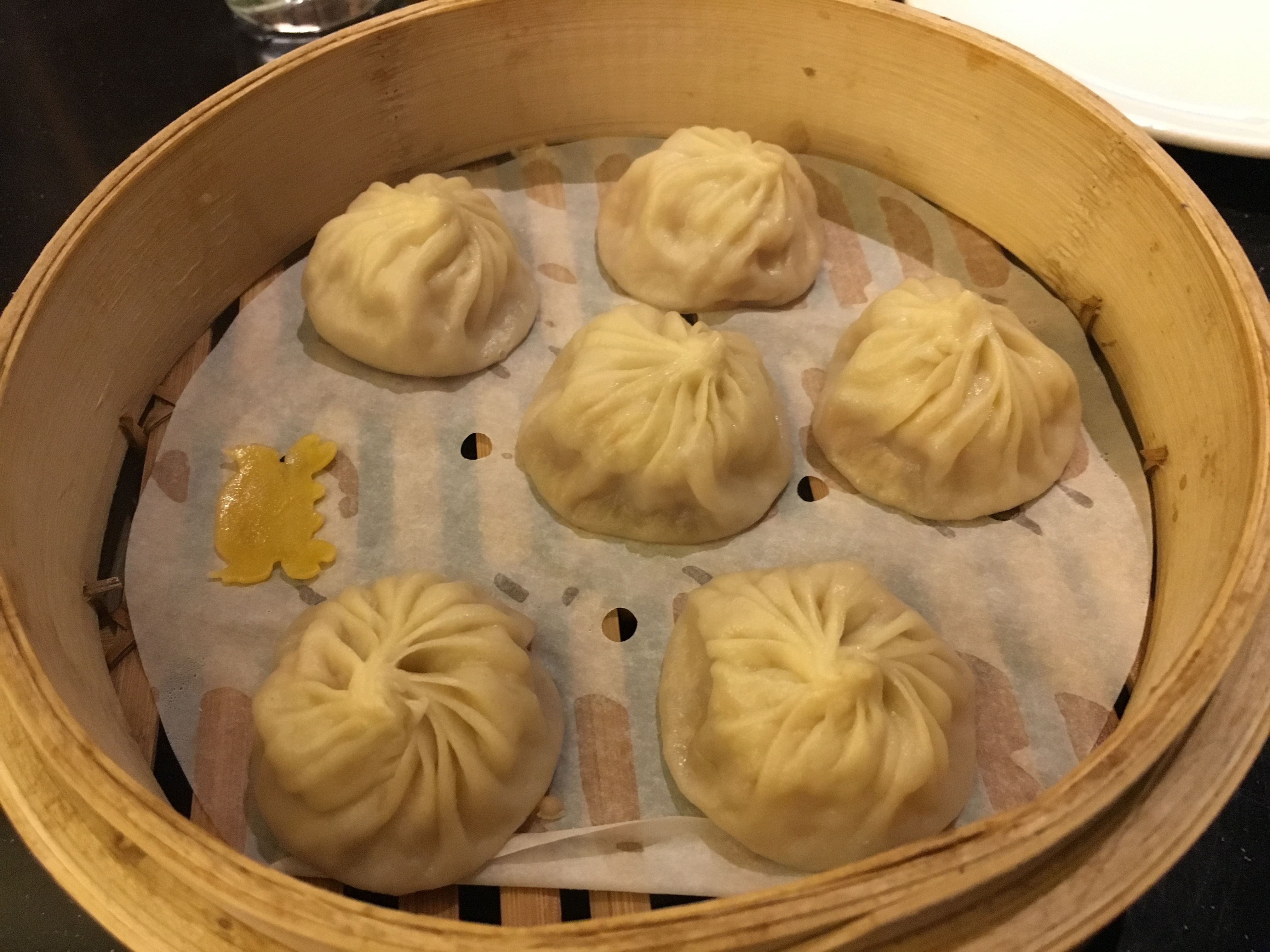 If I understand the distinction correctly (see discussion), DTF’s soup dumplings, owing to their emphasis on thin skin and more soup relative to meatball, are technically ‘Nanjing tang bao’ rather than xiao long bao. From a construction and consistency standpoint, I’ve encountered no rival to DTF’s tang bao in the Bay Area. If the ones I had in Shanghai were a 95, these would be a 90. From an enjoyment standpoint, I like these as much as the dumplings at Shanghai Dumpling in Cupertino, who serve a different style of dumpling that is bigger, has more soup, and has a more intense bacon like flavor that I dig and My Dumplings in Milpitas, who serve a small, soupy thin skinned tang bao. However, DTF beats these two restaurants in terms of consistency, within a basket and across days.

DTF’s uses even spiral crimps, which help make the tang bao compact and easy to pick up at the midsection with chopsticks. Despite the thin skins, none burst, or even came close, which give them the edge over many of the xiao long bao in the bay area— no goofy conical top knot like Kingdom of Dumpling, excess dough with slippery meatballs like Shanghai dumpling king, stout meatball draped with a skin like Shanghai Dumpling Shop ( these are good, but not my stylistic preference), bottom punctures from machine made XLB sticking to spoons/foil cups at Dragon Beaux or MY China. Some other issues I’ve encountered are a stiff wrapper at Dim Sum Club, oversteaming at Yank Sing, and at other places, off flavors, pink sludge instead of a solid meatball, and gluey spots under the meatball. These aren’t eat to make.

People were divided on whether they liked the pork or pork/crab tang bao the best, so personal taste rather than execution was the arbiter. I preferred the crab, which lent a subtle flavor to the meatball more than the soup. Great flavor as a whole— I did a dissection. Clean flavored, light soup, not oily. I found the pork meatball lacking in flavor, but hadn’t noticed this when I ate the dumpling in its entirety, so no big deal.

The tops of tang bao that weren’t eaten immediately got dry. That’s the better outcome— XLB at other places turn into a saturated, hole filled mess after a few minutes.

Skins were as thin as you’ll find in the Bay Area— the tang bao makers roll a little wooden plank over a dowel to achieve this. I don’t recall seeing that before at DTF in Asia, and I wonder if it’s related to repetitive stress injuries. Anyway, the skins weren’t as extreme in their level of extra-soupy, translucent, droop that I had at the Shanghai DTF, but that didn’t diminish my enjoyment.

Finally my turn to eat there today. My wife and I came away rather disappointed. Our point of reference was a DTF meal in Hong Kong in 2013. Its not a surprise that this meal didn’t measure up to that one, but its only around above average by local standards. 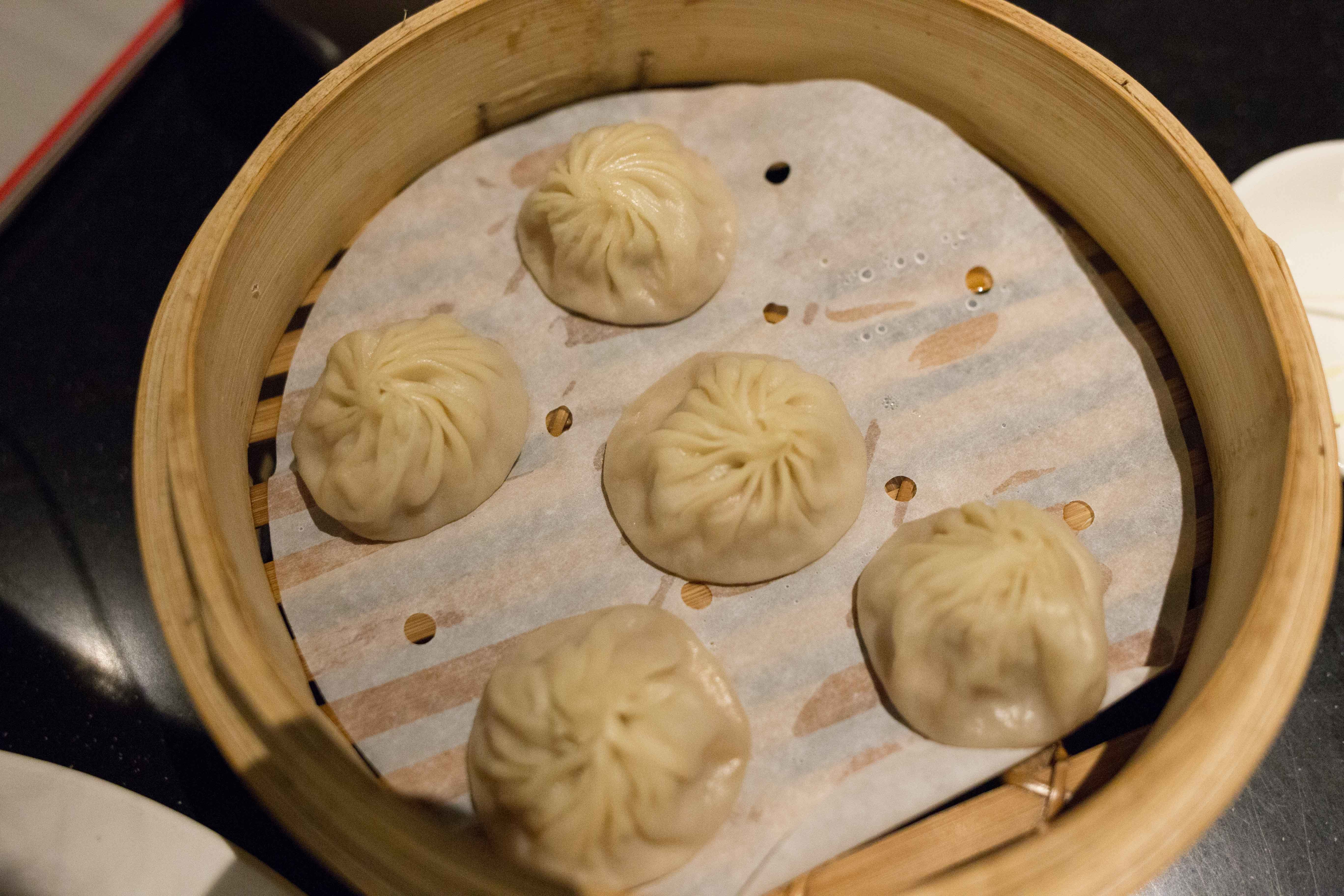 Pork XLB- Came to the table with no steam whatsoever coming from the basket. Had I not have two crazy and hungry young children screaming at me and I was thinking more clearly, I would have thought about sending it back. Its still very warm to mildly hot, but the XLB skins were dry already. For the XLB itself, the skins were gluten-y, thin, and held the content/ soup well. The minced pork, was like @Barleywino said, overly dense. The pork didn’t taste very distinctive. I felt it was a XLB made with all the famed DTF techniques, but without the ‘excitement’. I am going sticking with Panda for my XLB fix close to home.

(There were 6 XLBs in the basket) 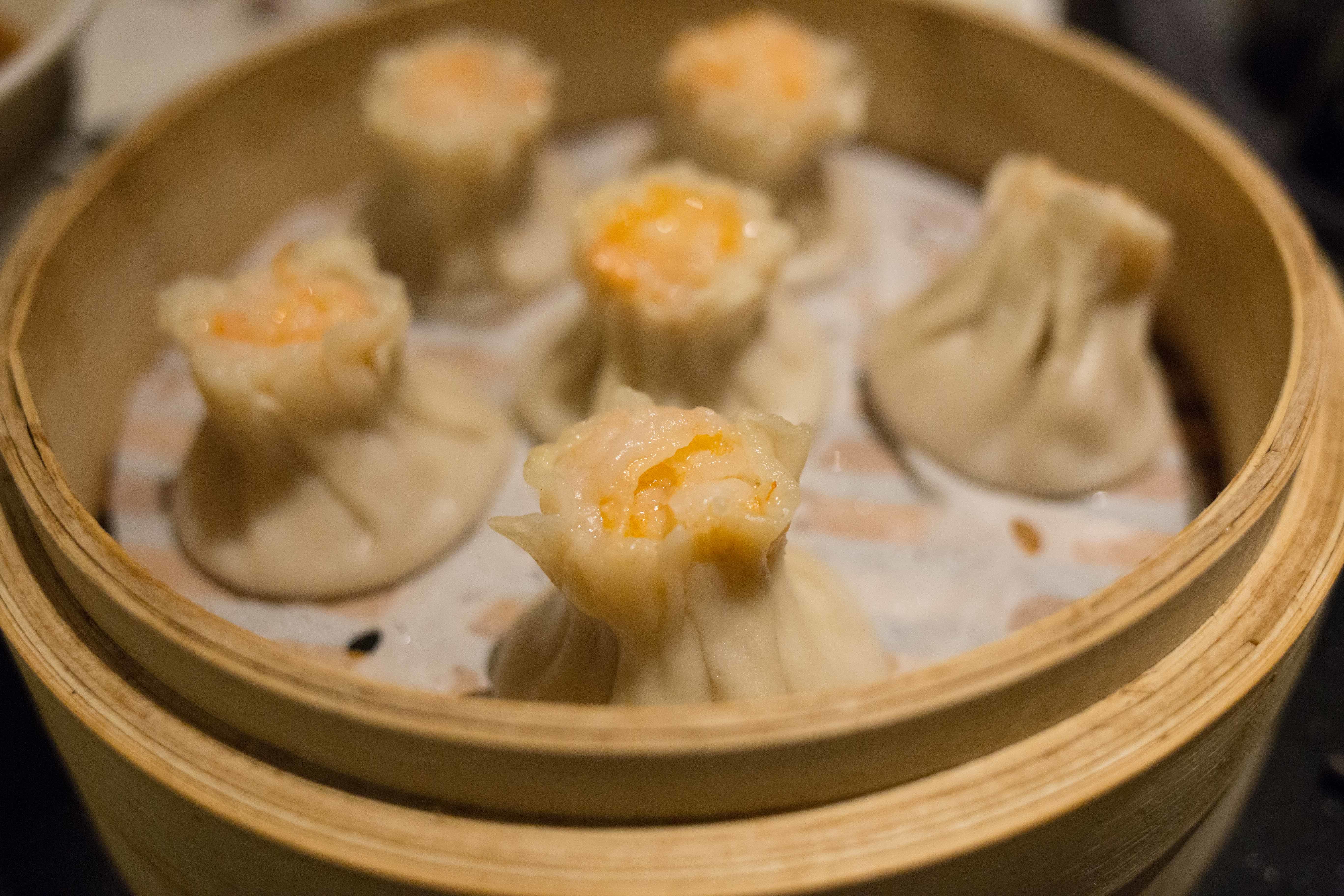 Pork/ shrimp shumai- Like a thicker skin XLB with a shrimp at the top. Not too different from the XLB. 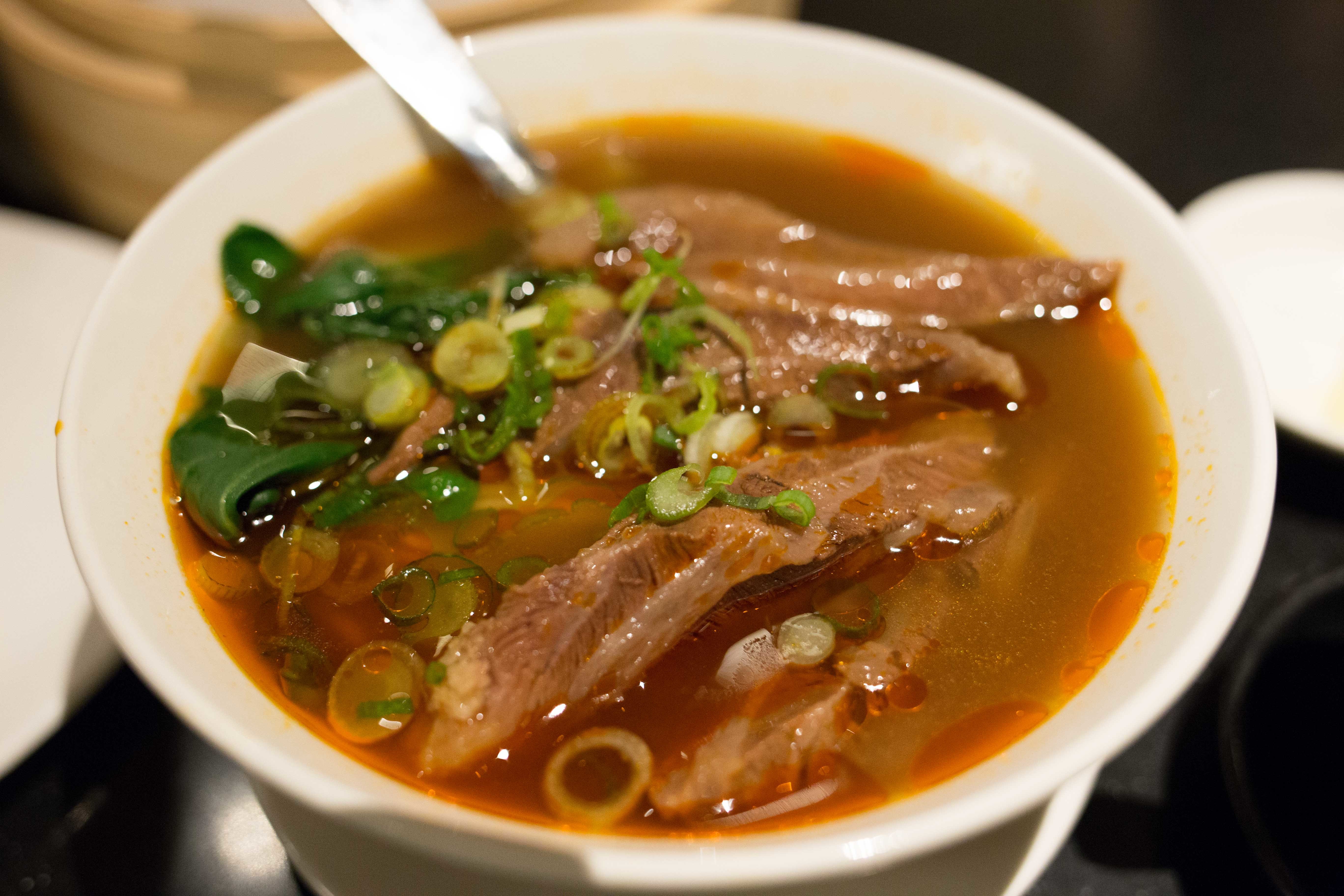 Braised beef noodle soup- generous amount of braised beef that were tender. Noodles at the bottom with bok choy and scallions. The dish was made reasonably well, and I drank all the soup. Though I don’t think its reached greatness. I am not a Taiwanese beef noodle connoisseur though. 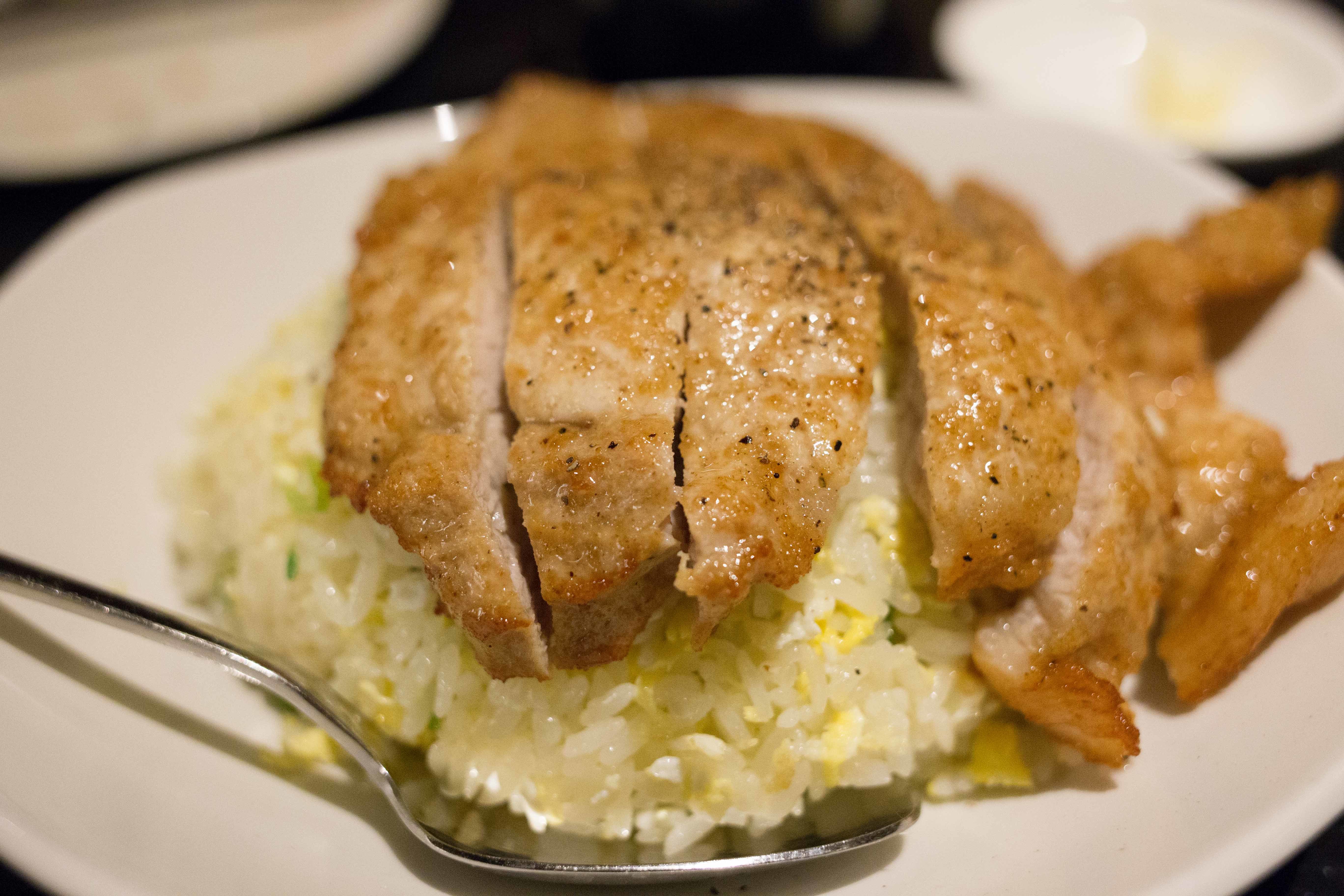 Baked pork rib fried rice- The pork was marinated in brine, and then they sprinkled salt and pepper on the breading at the end. Its too salty- could use about 75% less salt. The rice was some type of medium grain semi sticky rice. 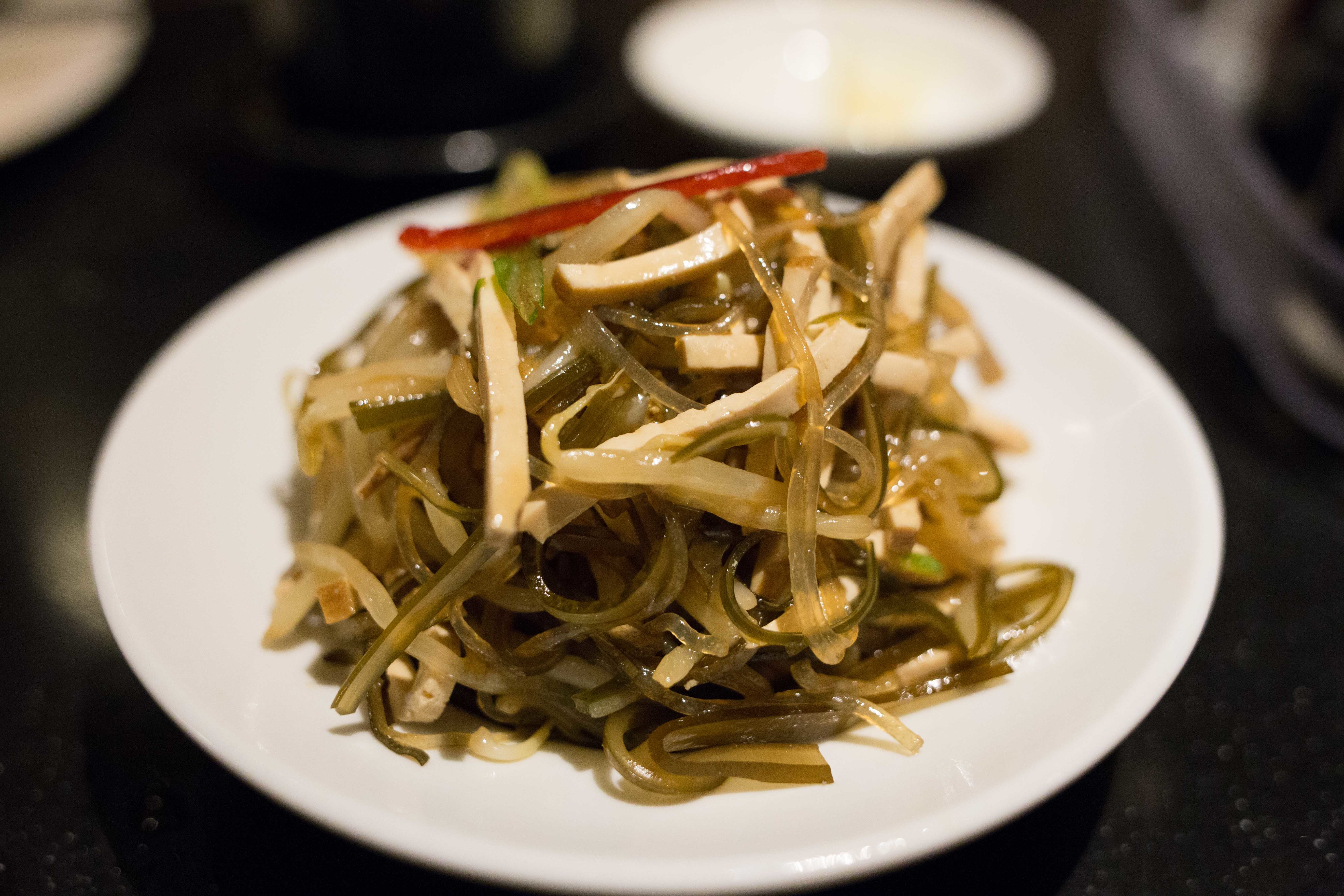 Tofu and seaweed appetizer- it would taste better if its not overly salty. 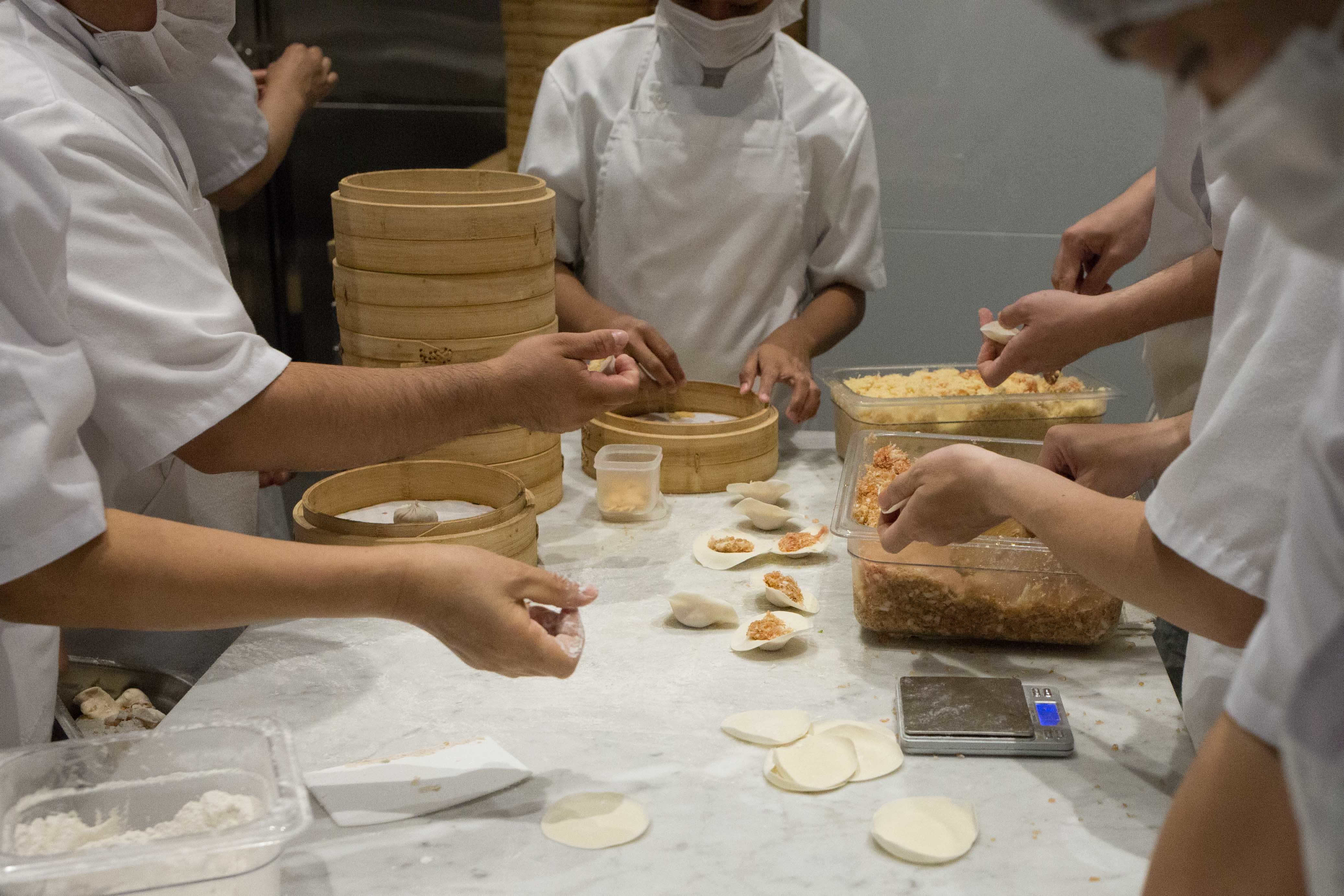 The team making the XLB. Note the scale used to measure the weight of the filling. 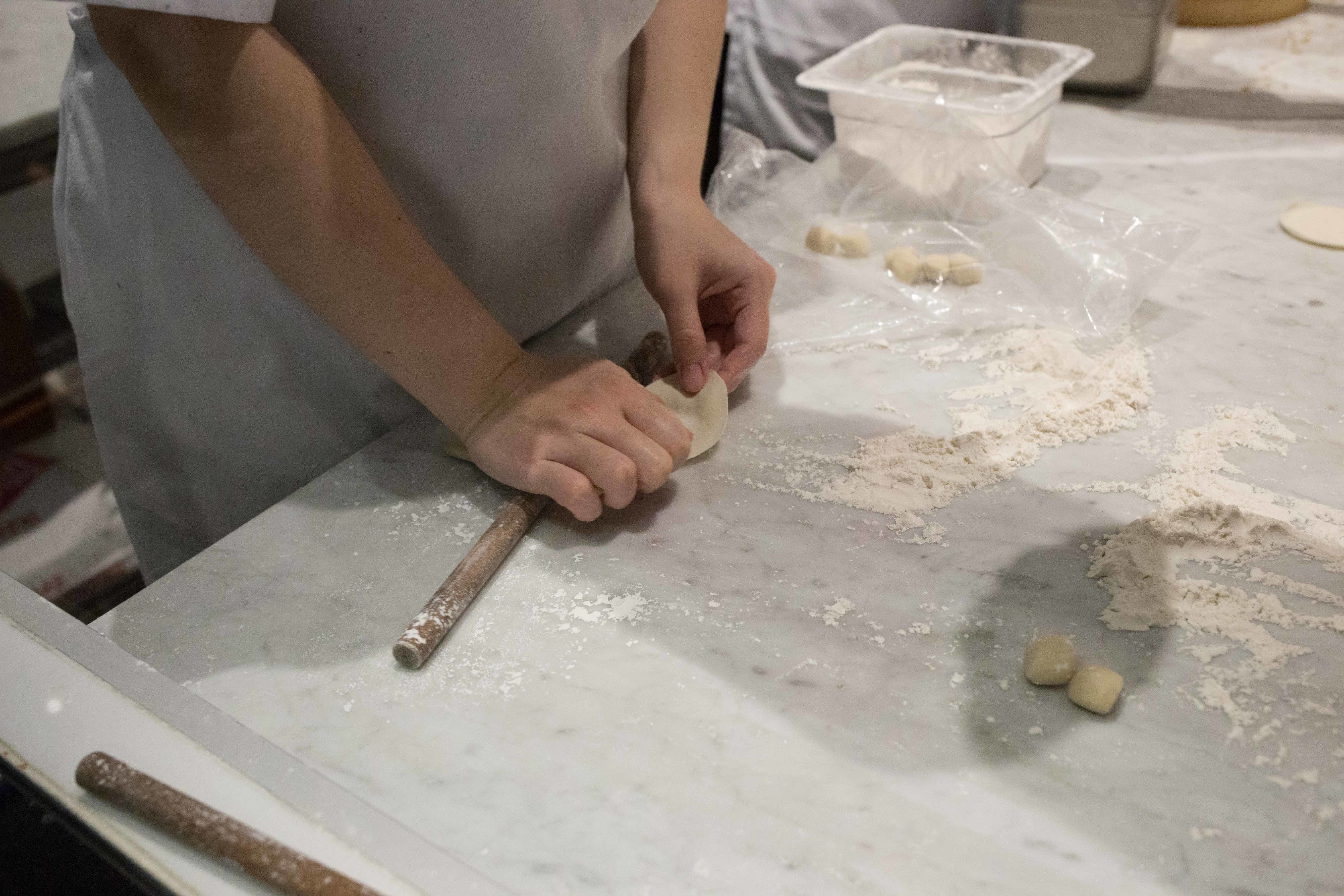 Collins Best and Mayfair flour in sight. Not sure if they use these for the XLB. This page on the menu documented the Michelin Stars the HK branch garnered from 2010 to 2013. Walking out of the HK DTF meal last time, we felt the dumplings were great and the noodles were very good, and were highly satisfied with the entire meal. I must say we didn’t feel the same this time. Hilariously the idea of filling up at Santouka arrived in both of our thoughts independently mid-way through our meal.

We drank a lot of water afterwards because of the salt.

This page on the menu documented the Michelin Stars the HK branch garnered from 2010 to 2013. Walking out of the HK DTF meal last time, we felt the dumplings were great and the noodles were very good, and were highly satisfied with the entire meal. I must say we didn’t feel the same this time.

Just ate at DTF Hong Kong Causeway Bay recently. I must say it confirms my memory that the DTF HK XLB is much better than the ones I had in my one meal at DTF VF. My local favorite in the Peninsula and South Bay- Panda, pales compared to DTF HK.

DTF VF’s previously closed 3-5pm timeslot may now be open for non-reservations (don’t know if its weekend only). Best to call and confirm.

I was visiting the last week of august and we were unexpectedly in the area on a tuesday, i was hoping that 2pm on a tuesday we could get lucky as a two person walk in or eat at the bar. Ummmm… No. The place was slammed, and they told us an hour and a half wait. On a tuesday.
So we went elsewhere, disappointed. Moral of the story would be make reservations for weekday lunch or go early prepared for a long wait. Not sure when i’ll be back, but my parents are serious dumpling lovers so i know they will return. I’m passing on to them recommendations from this thread since both are technologically challenged

What do you recommend other than the XLB? The Sheng Jian Bao and Chef Zhao Tofu seem to be popular on Yelp, as do the Seaweed Rice and Crab Meat Ball. The Spicy Flounder with Tofu (clay pot) and Crab with Rice Cakes look good too. What else have you tried and what do you like most?

Sorry, I haven’t tried too much there yet. The SJB were good. I had some kind of beijing spicy eggplant and it was fine but not exceptional. Look forward to your report.

DTF is most famous for 2 items: soup dumpling and fried rice.

Other must get items are the spicy wonton, steamed dumplings, and the Taiwanese beef noodle soup.

What’s special about their fried rice; is it the nori version that everybody on Yelp seems to like?