As many of the Kumino fans know, chef Haochen Liu, a Manresa alum, closed down the fusion noodle, bun and rice plate place in Mountain View last year, citing a small dining room and an inability to expand the restaurant as factors. Since then the chef has been looking for a suitable location. Recently I got a note from the restaurant FB page that they were reopening in Cupertino as Kumino China. We went there on their third day of operation, for a Sunday lunch.

Chef Liu’s partner, chef Bryan Leavey, has gone back to Boston already, and the chef is now partnering with the owners who own CBI Boiling Fish and some other restaurants. In fact, CBI Boiling Fish’s Cupertino location (the other in Milpitas) has converted directly to Kumino China. I’ve never been to CBI, but judging from Yelp pictures, Kumino China just put a new sign on the door and reused all the interior elements- design, furniture, bar, utensils. It was quite a shock because Kumino in Mountain View went with a minimalist modern look, and personally I think it matched the style of the food quite well- forward looking, not bound by tradition. The current CBI interior has heavy and exaggerated traditional Chinese accents, e.g. the chairs especially, so it was a bit weird as we sat down inside for the first time.

The menu has changed somewhat. Gone were the soup noodles, which had some of my favorite dishes at the original Kumino. After the meal we had a chat with the chef and he mentioned that those dishes were often compared to ramen around the Bay Area and misunderstood. I felt his garlic oil pork noodle soup ranked as one of the very top bowl of ramen in the Bay Area, (still drooling). But perhaps cooking multiple big vessels of stock every day is just too much hassle and unprofitable compared to cooking the soupless noodles that the menu retained.

We were told there are two chefs in the kitchen now. We ordered some new items not found on the old menu, and we also had some old standbys.

Uni chawanmushi. My vote for the best dish of the meal. Silky, steamed egg custard with uni on top and a savory, salty, and rich brownish soy sauce-based sauce. Steaming, decadent, and delicious. 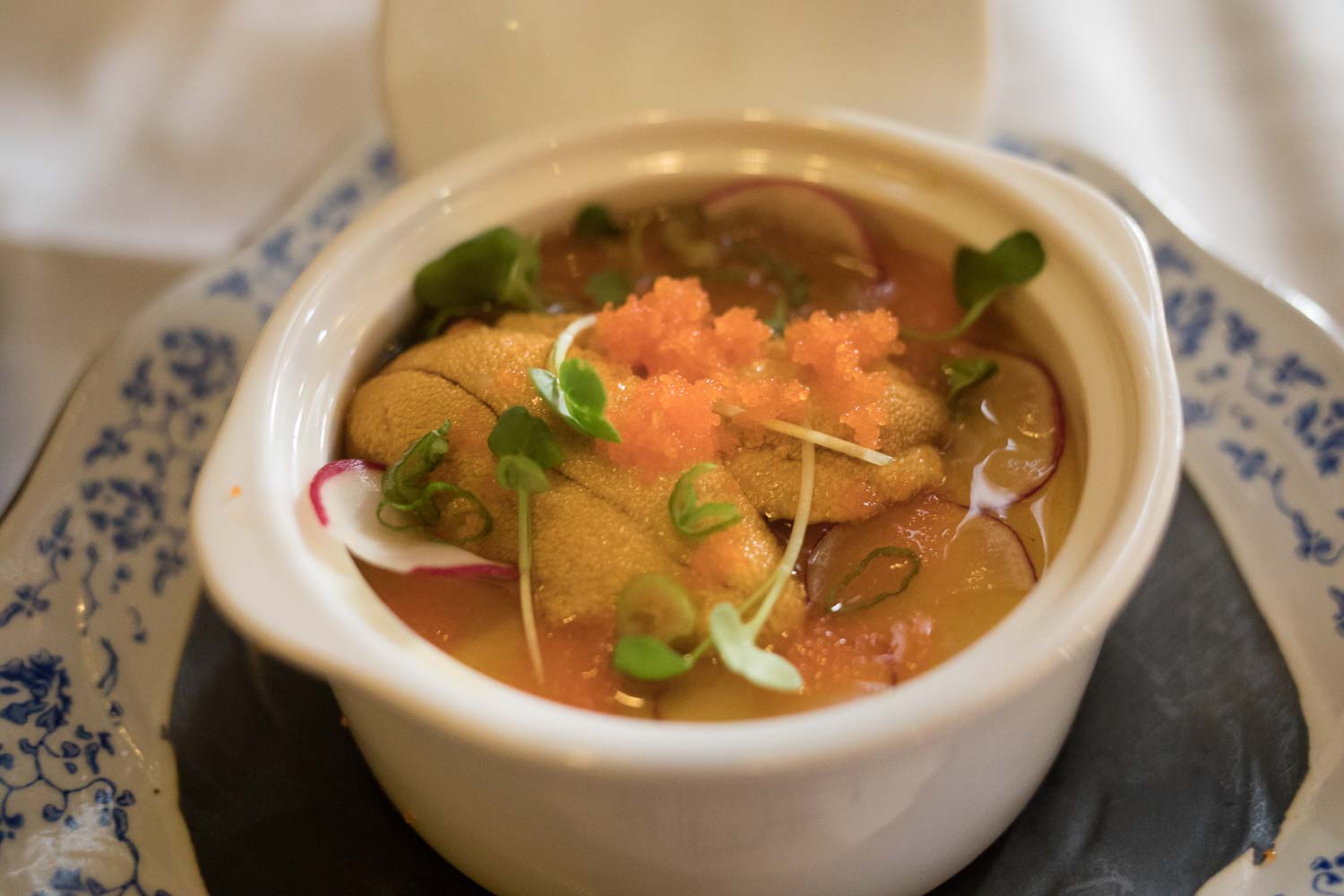 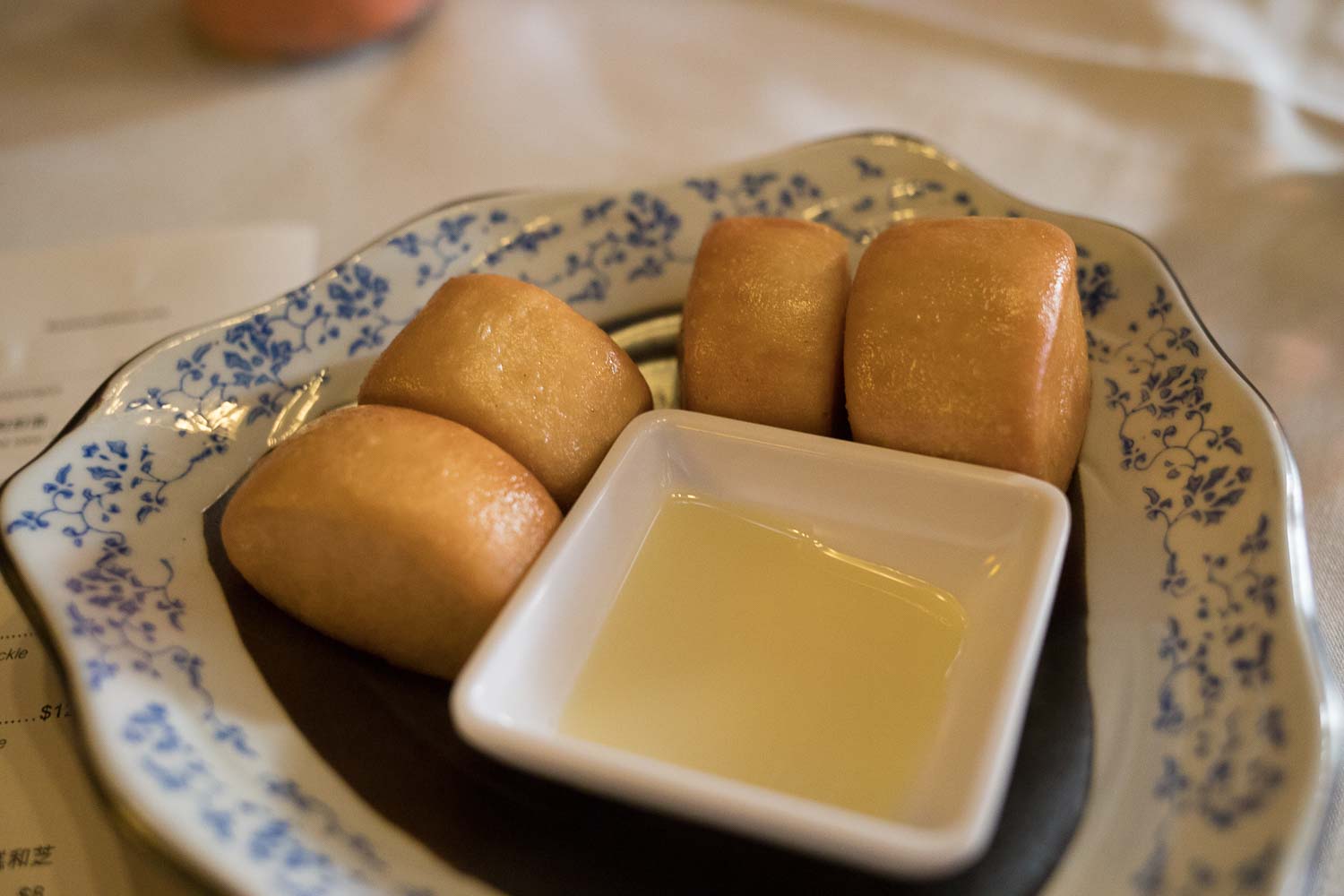 Truffle and mushroom jiaozi. Done quite well. These were made in house, including the skin, which was chewy, and full of gluten. The chef, coming from Tianjin, should be well versed in all things jiaozi. The inside was full of what looked like small chunks of oyster mushrooms and Chinese? black truffles. Tasted pretty well. My wife liked it more than me. Later recommended to us was the pork jiaozi, which we’ll try next time. 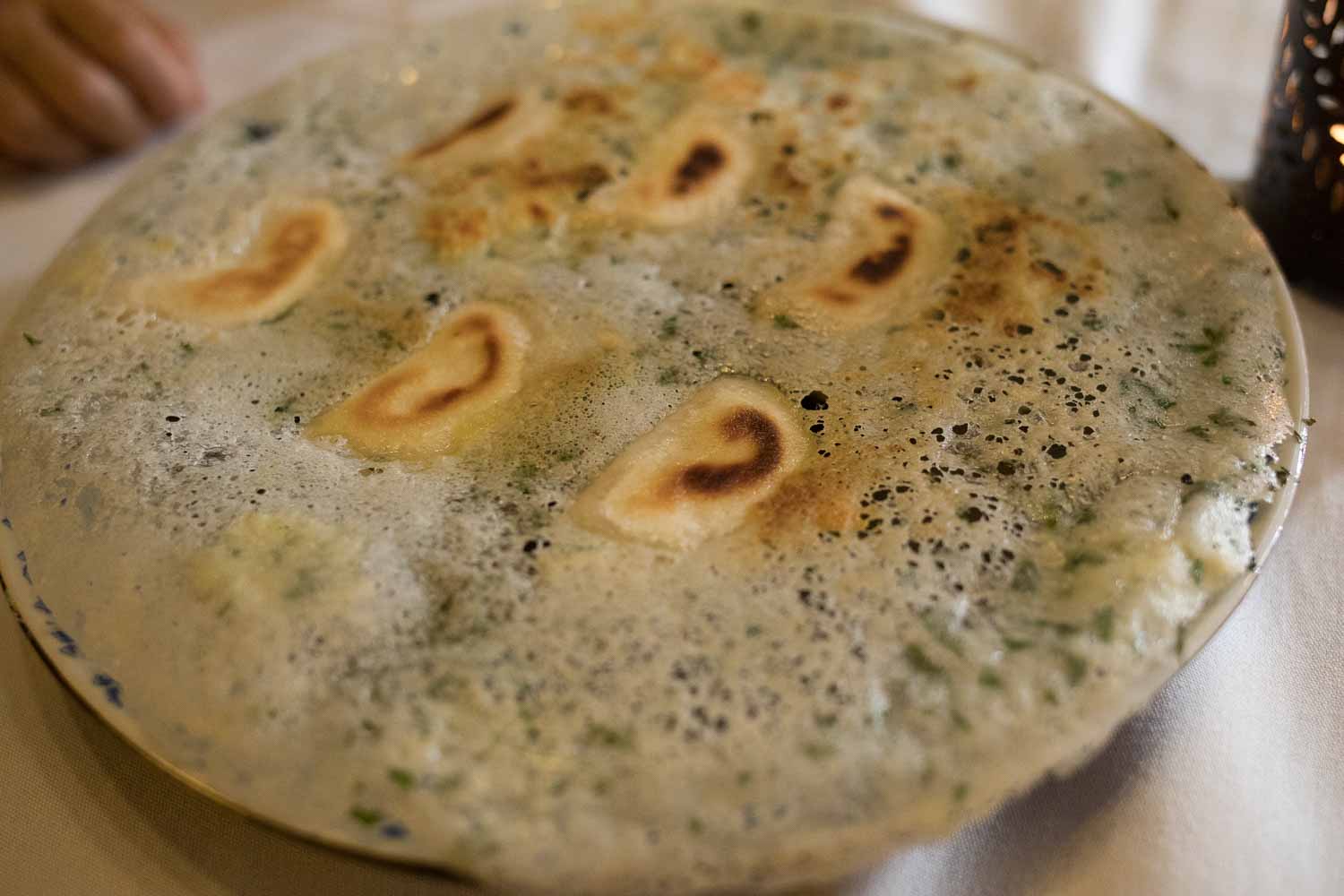 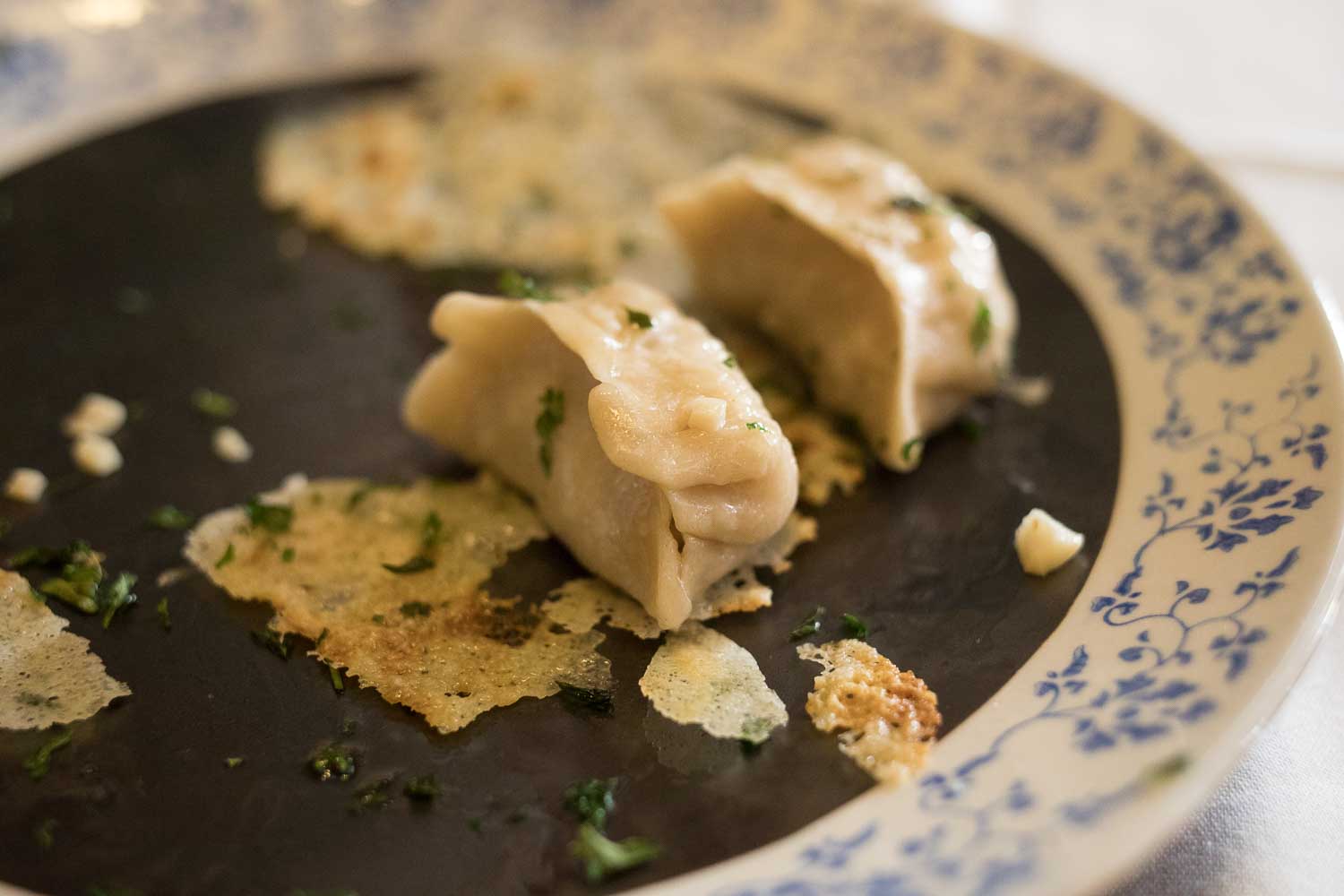 Garlic pork noodle. We were told by the chef after the meal that the noodle was made in house. We told him that the medium flat noodle was overcooked substantially, which really affected the whole dish. So chalk that one up to day 3 hiccups. The pork was cooked well, tender and well flavored. The asparagus was bland. The chef mentioned that Kumino China now shares the same ingredient sources as the rest of the CBI (+ other ) restaurant operations. I felt while the asparagus was already pretty bland (just like most random asparagus found in supermarkets) when Kumino was a standalone restaurant with the chef controlling its sourcing. Now, its even more so. So let’s hope that if its a sourcing issue, that the chef can keep the sourcing at a certain level for Kumino China. 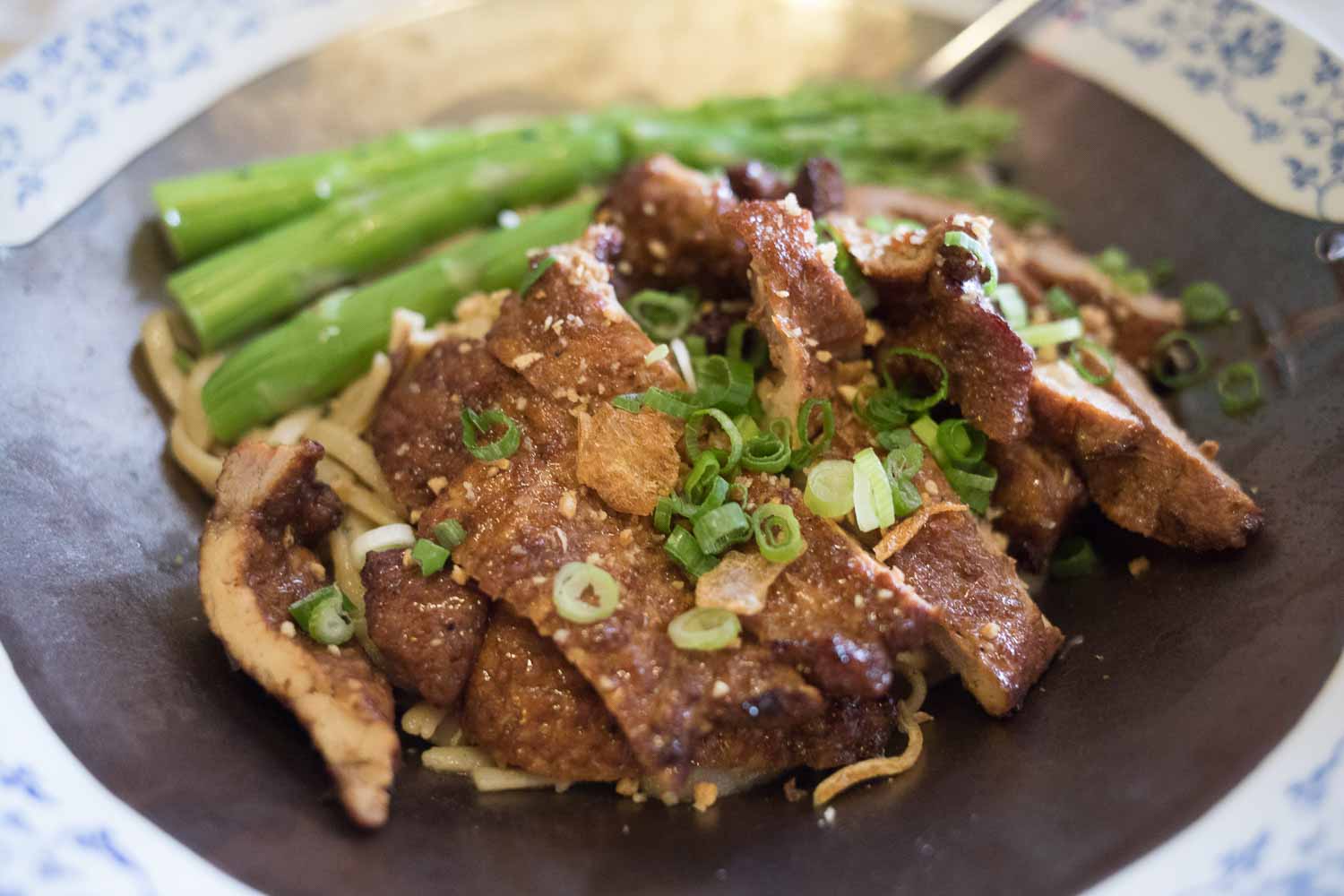 Dan dan noodle. The ramen noodle was slightly overcooked this time, but better than the garlic pork noodle. The sliced pork was seasoned well, as usual. Both plates of noodles, however, missed just that little spark that took them to the level at Kumino. The flavors were just a little less pronounced. 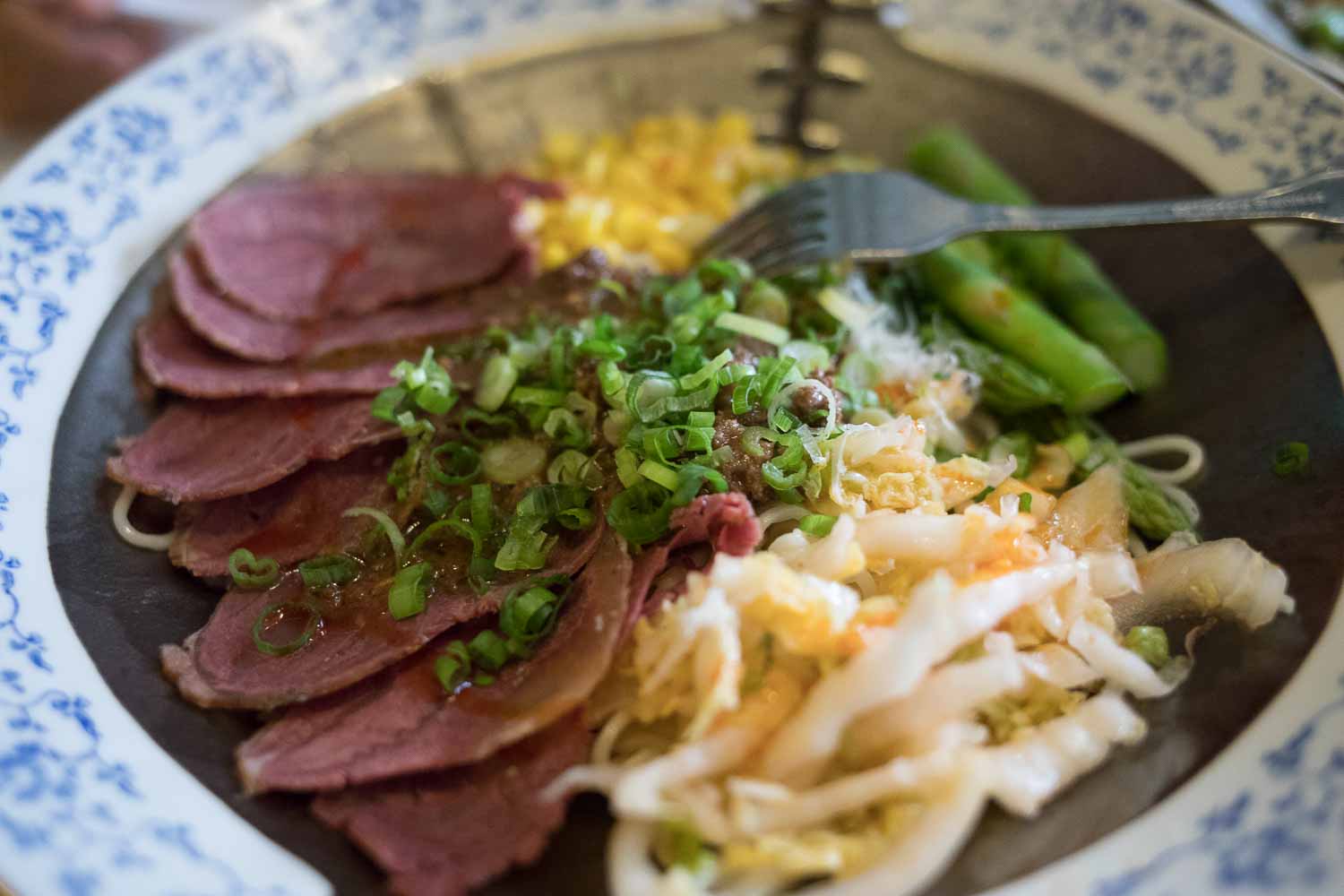 As expected, Kumino China on day 3 remained a work-in-progress. Some of the kitchen issues like cooking timing- I am certain the chef will sort it out in time and not worried about at all. Some, related to flavors, we’ll have to wait and see if its personnel ramp up or sourcing or something else. Overall the dishes are promising, and its clear he knows how to cook (see the chawanmushi). Its not fair to compare day 3 of Kumino China to the well-oiled machine that Kumino was when I had my first meal there.

I do hope that the partnership between the chef and the CBI people is a good one, because I don’t think any constraints on his talents is good on anybody’s part, and I hope that its more than a marriage of convenience because the chef has been out of the kitchen for almost a year (and he has a young family to feed). He did slim down significantly, however. He attributed that to the stress of opening a new restaurant. In any case, I’ll be cheering the chef on and will return once they ramp up to try the duck, a new item on the menu. 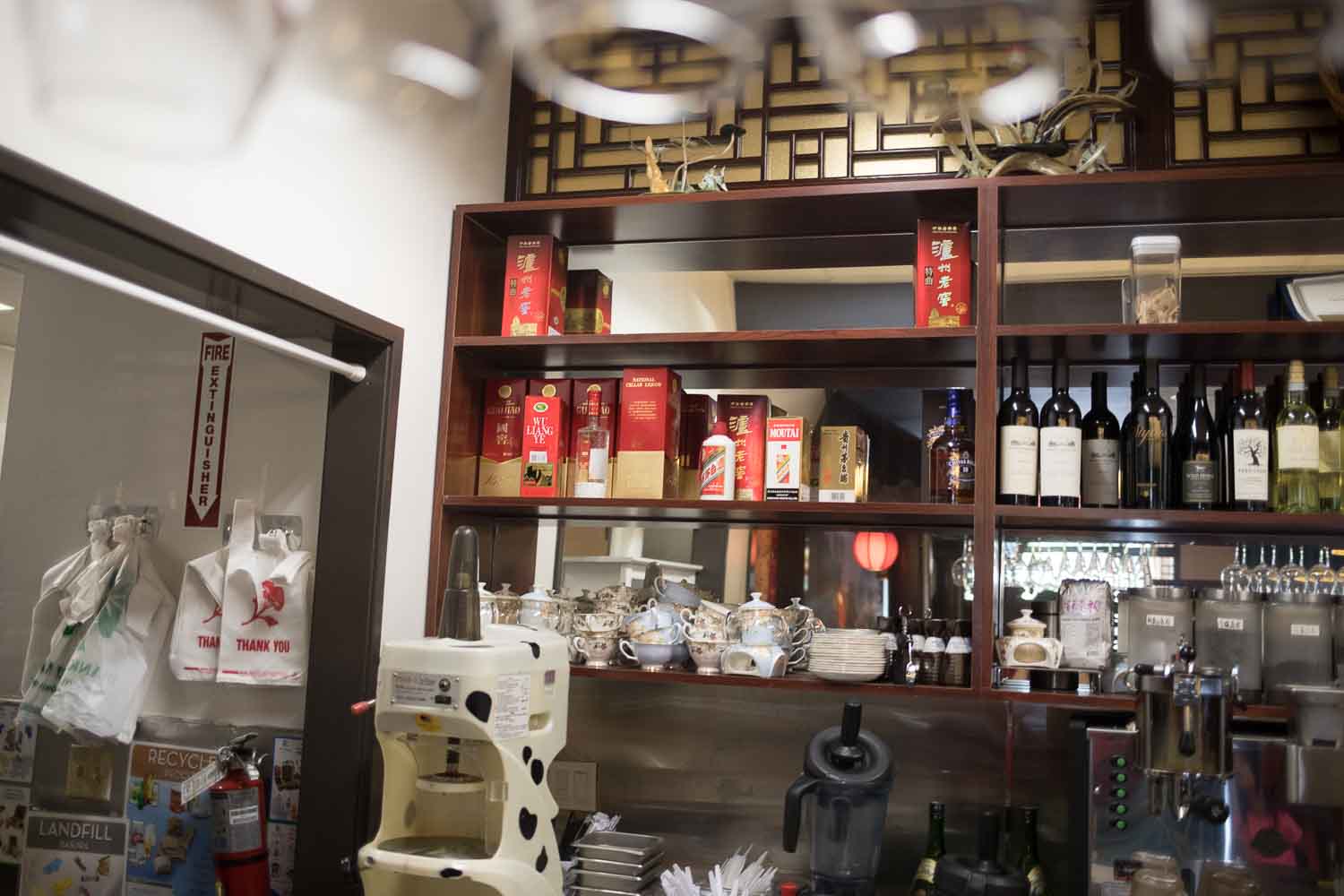 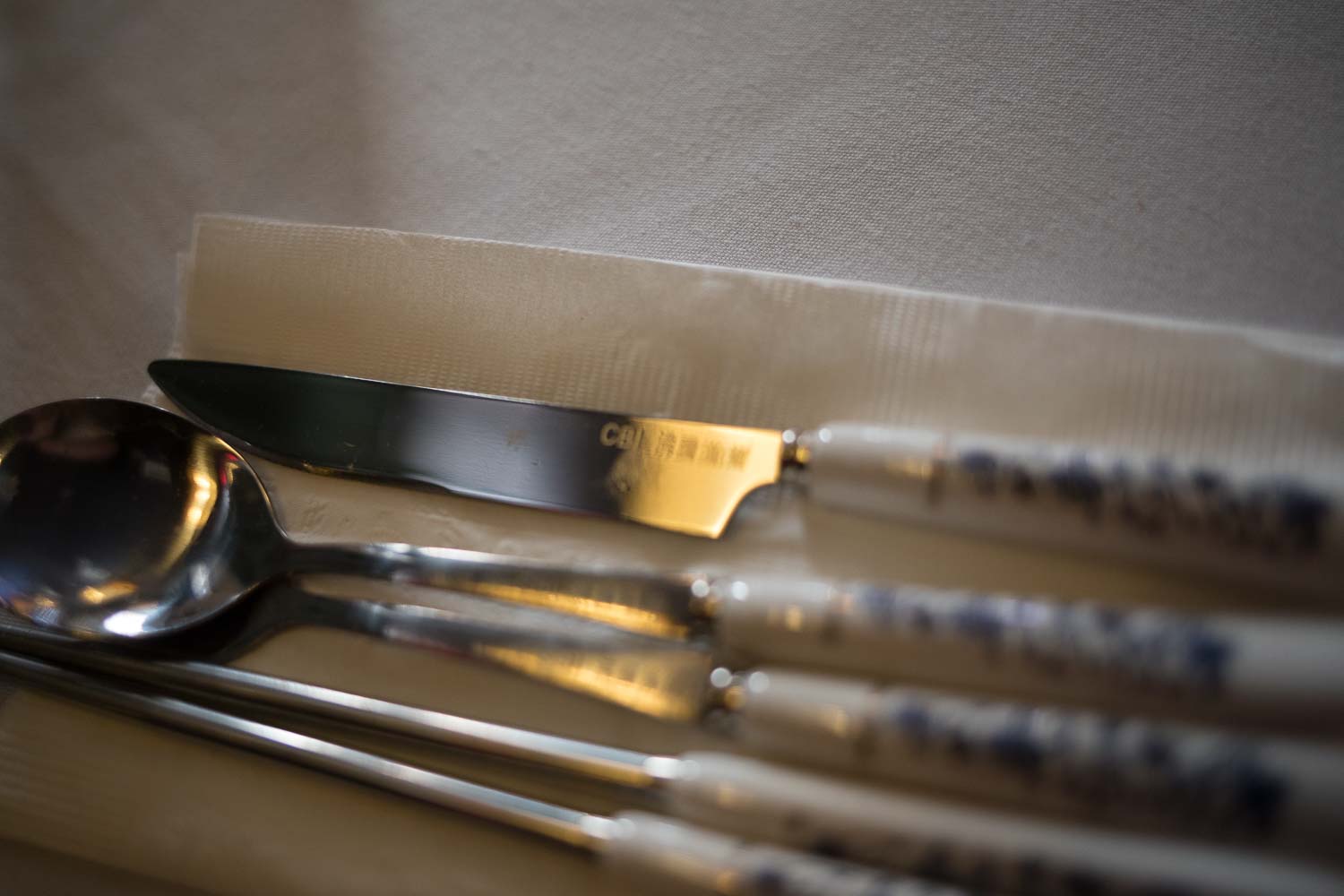 Soft-opening menu. The chef recommended the half duck for us next time, which came with two bowls of duck ramen. 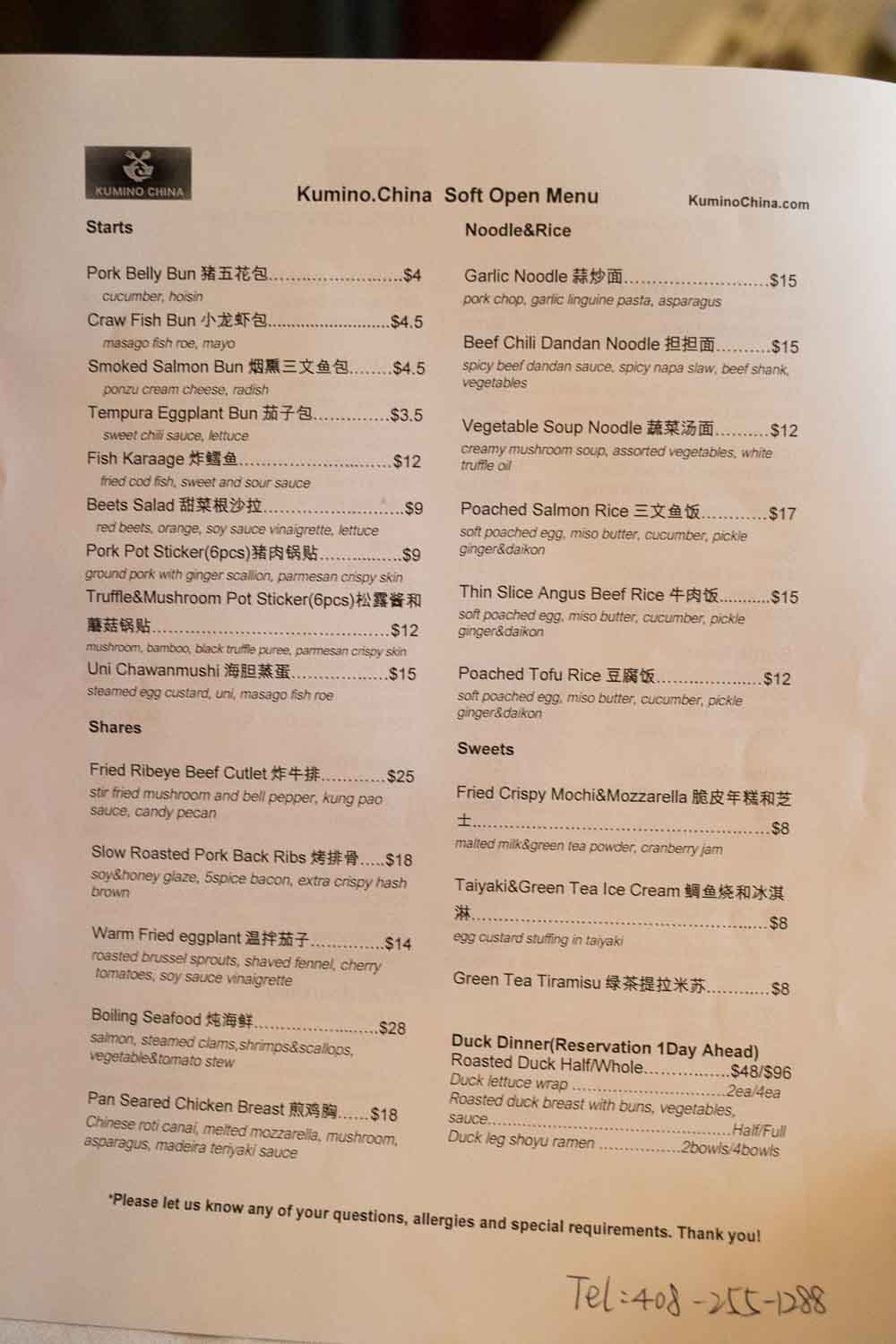 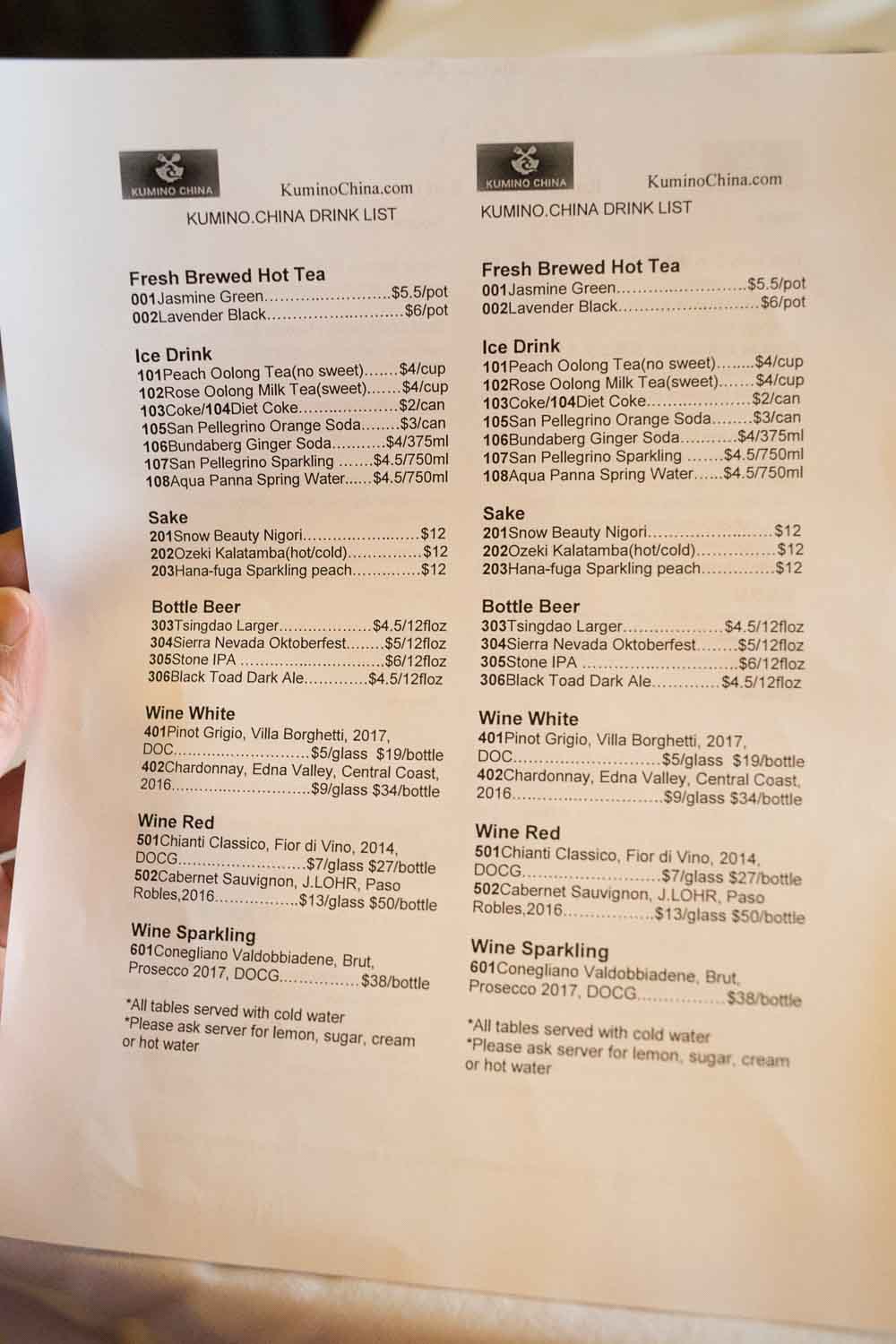 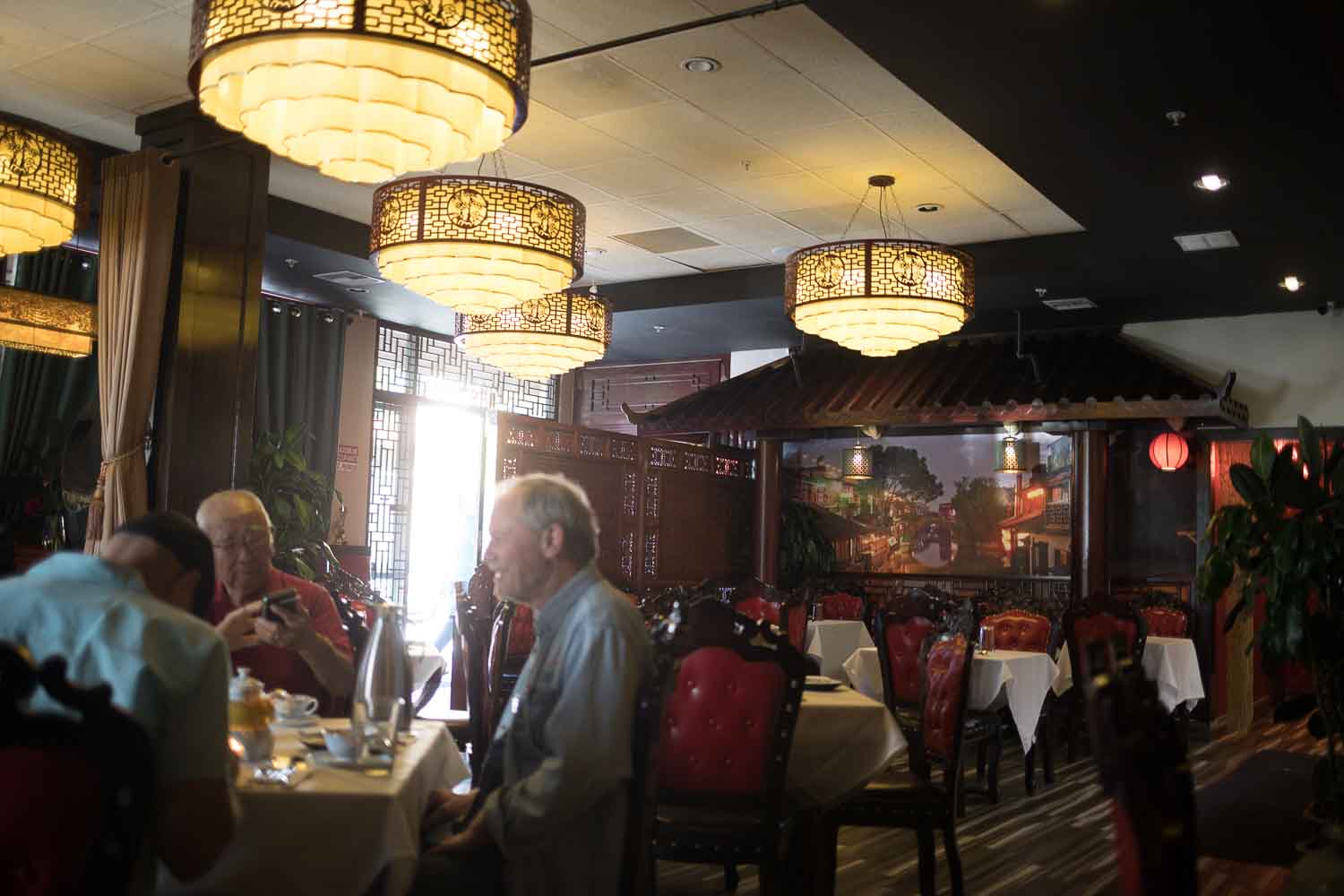 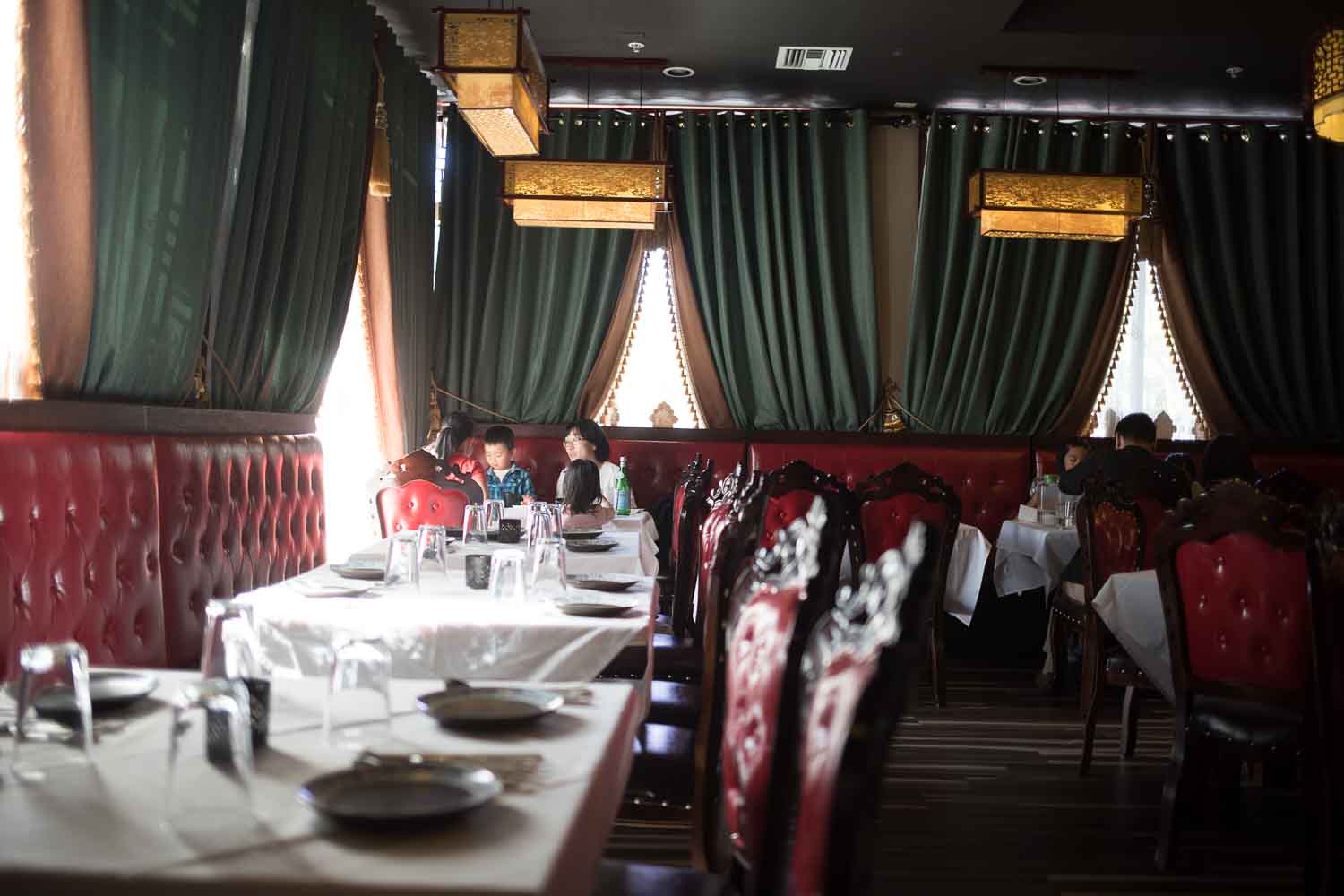 Doesn’t seem like Kumino has been discussed much on these boards but it is a worthy candidate to talk about. In a non-descript Mountain View strip mall that also houses Taqueria la Bamba, Kumino is a fusion restaurant that serves food from all over Asia, with techniques borrowed from the two chef’s background. One normally wouldn’t expect this kind of resume in a modest restaurant in a random suburb. The chef Haochen Liu was a CIA Hyde Park graduate and a line cook at Manresa. The story went…

For some reason, by reading the 2 threads, I find the first Kumino’s positioning more convincing because it was all Asian crazy fusion (not so common) and it was more modern and fun. I fear the new one, people might think it was just another Chinese place.

The place, other than using some Chinese ingredients, is really not Chinese, but pan-Asian. Just like we don’t call Momofuku a Chinese place.

Then I wonder why they added China in their name of restaurant. The interior decoration now is very Chinese too. Maybe it is because of the joint venture constraint imposed by the investor?!

Thanks @sck for the report! Now I want that uni chawanmushi even more! Still very curious about the duck & the $$$…

the duck does come three ways- the half duck comes with two bowls of duck shoyu ramen, some duck buns and duck lettuce wrap. So there’s a bit of effort involved.

Thanks, hope someone tries it & can provide more input on the high ticket. We’ve had duck 3 ways at a couple of other places & if I remember, a whole duck was around $40. Very curious about his prep…

You should go try it

I will, but other dishes sound more interesting to me… I liked the warm eggplant salad at the old location, so would want to try the current eggplant dish. Will have to gather a couple of friends who liked the old place…

Nice. Look forward to your report too.

For the chawanmushi, I know how to do the egg custard at home, and I can get uni myself, but just don’t know what he put into the sauce…!

I think the investor probably just said to the chef, ‘here’s a location that’s not doing so well and could use a refresh in the concept, and i don’t really want to spend any more money on decor or equipment. Interested?’

There is a similar case in Paris, a young Chinese chef, used to work in a 1 star restaurant, quitted and open his own restaurant. He was doing very well with his wife in a tiny space, excellent cooking, cuisine was refined and precise and quite unique. The space was small but clean, it was full every night. He moved to a bigger place, I went there maybe 2 years after for a visit. When I entered the place, I thought I had the wrong address, the place was indeed big, but empty with only 2 or 3 tables for night, the restaurant was not well situated, the food didn’t resemble anything that I remember, but stuff you find everywhere in Paris. Fried food were soaky. The place smelled bad and probably reused the decoration of the previous restaurant. There seemed to be some kind of curse. The chef was not motived anymore.

Sometimes need to be careful with the decoration (and investors)!

Kumino China tweaked their menu slightly now compared to when they first opened. 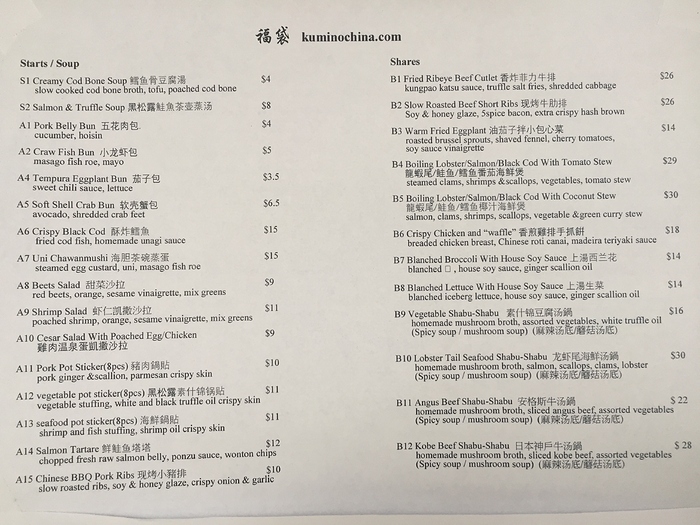 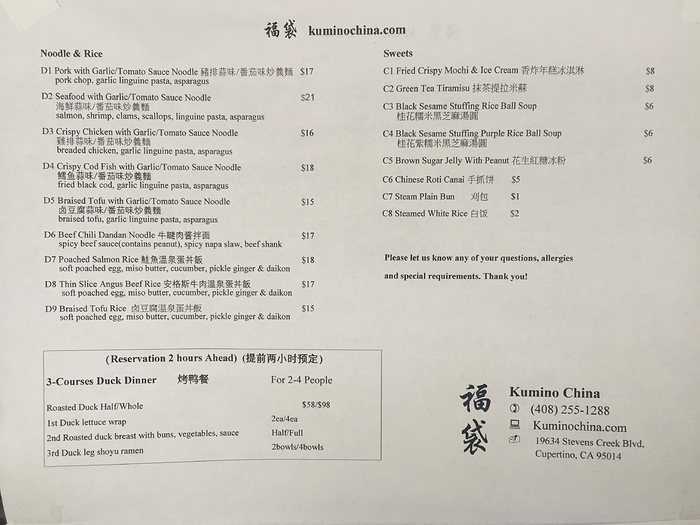 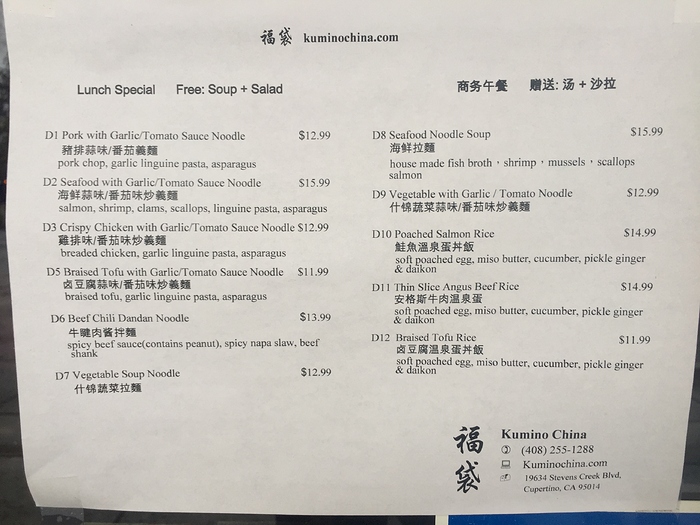 Creamy cod bone soup $6: really good. loads of cod bones resulting in a very rich, intensely seafood-y and flavorful soup. For $6, its really good value. And its great for a cold and rainy evening. 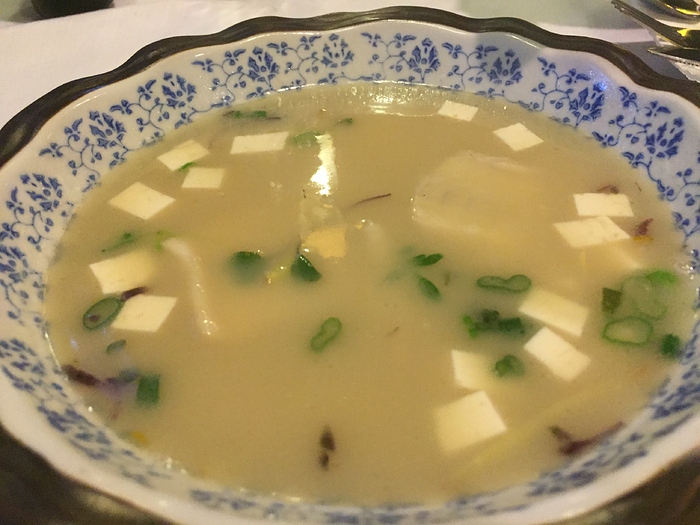 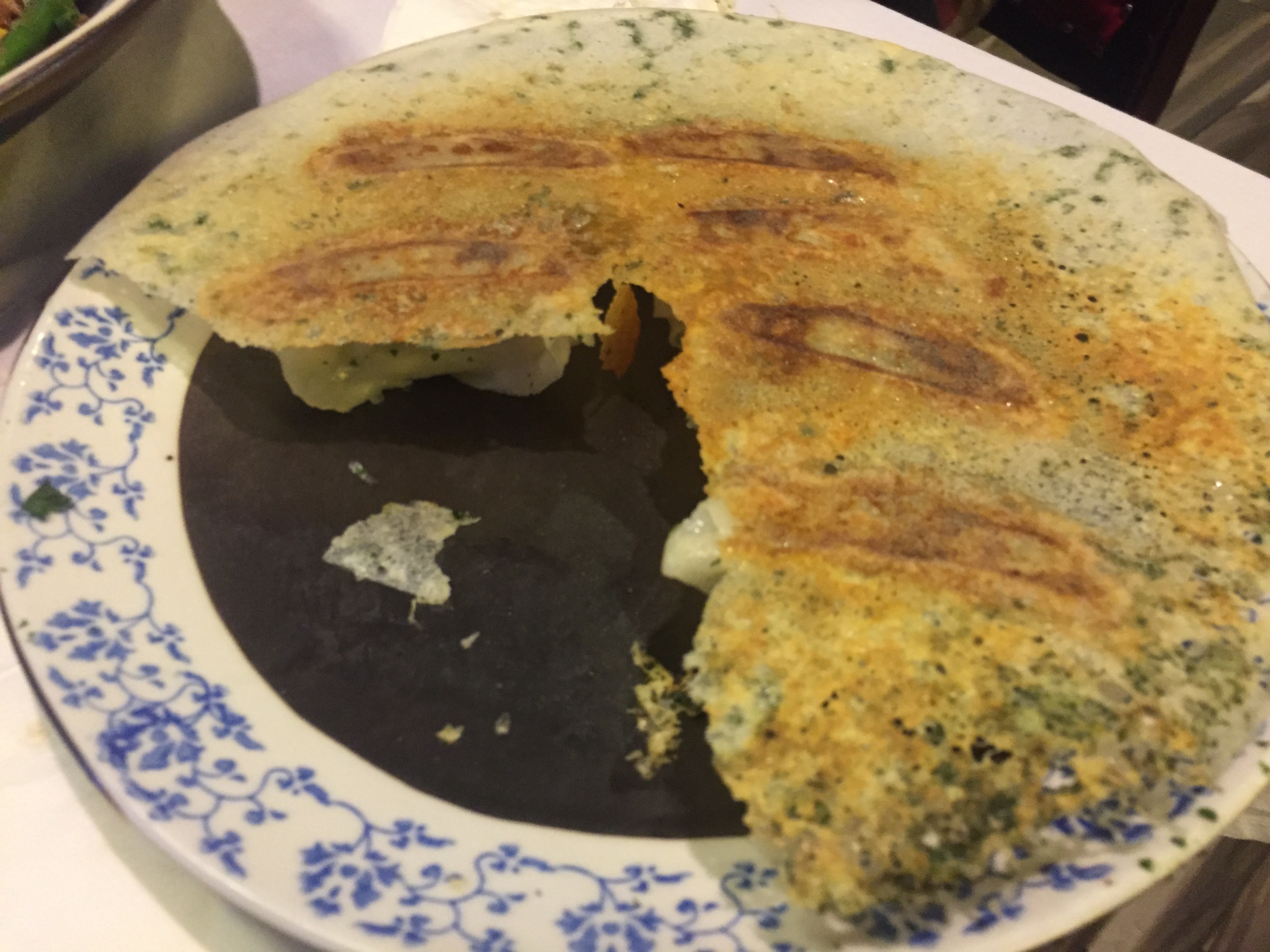 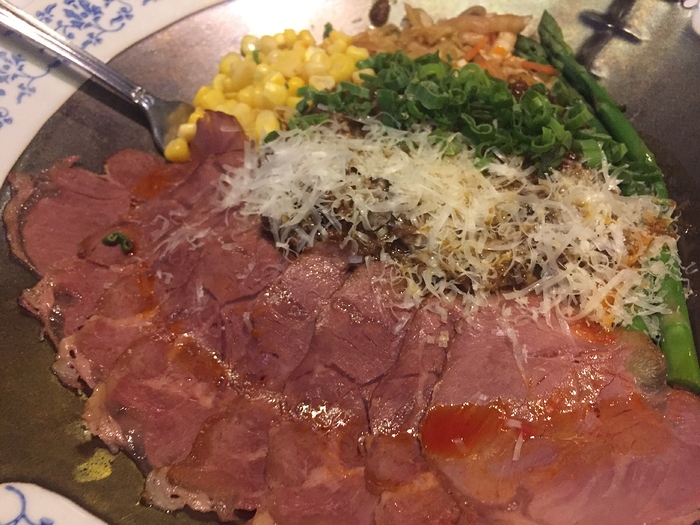 Thin slice angus beef rice: $17. I think I’d stick with the noodles as the flavors of the rice bowl didn’t quite stand out, since the flavors came mostly from the marinated beef slices and the runny egg. 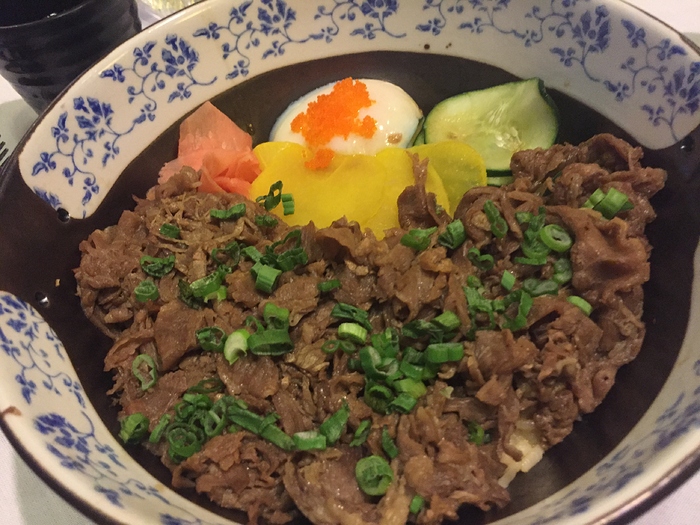 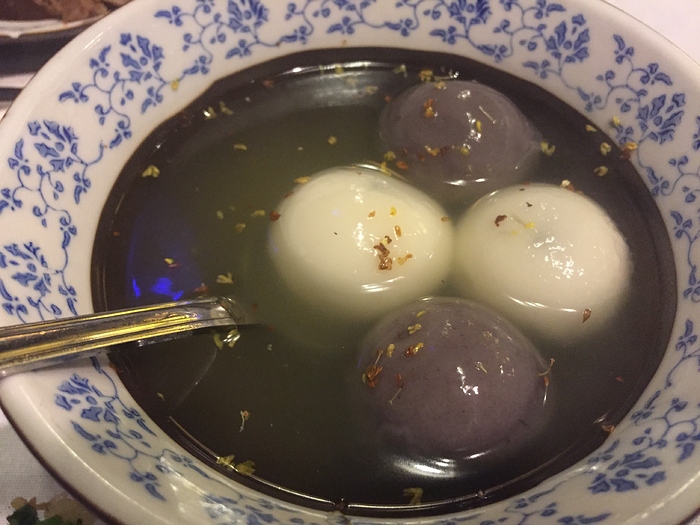 Good news is that the duck now only requires a 2 hour advanced notification. And we were strongly recommended to order the duck so we are going to come back and try it. They said they hang the duck and slow roast it. Duck is getting more expensive though, $10 more than soft opening price for the half…!

Wow, haven’t been, but, am now going to go soon. That menu looks good and your photos have definitely piqued my interest, thanks. Please let me know if you have room for me to join when you next go.

Uni Chawanmushi. Single serving $15. I’ll be back, delicious. the rest of the menu looks like fun, 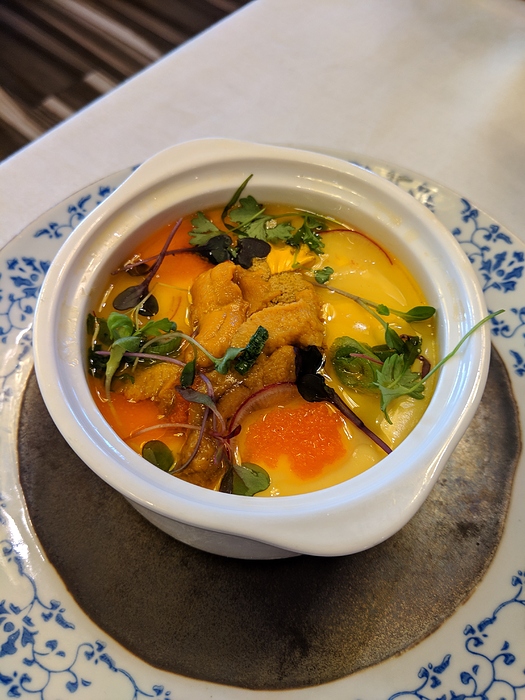 Yeah the chawanmushi is seriously decadent. At some point I will be back for the duck, for sure.

Seafood stew with tomato. Creamy and a tad sweet, with some shellfish, salmon and asparagus mixed in. Decent. 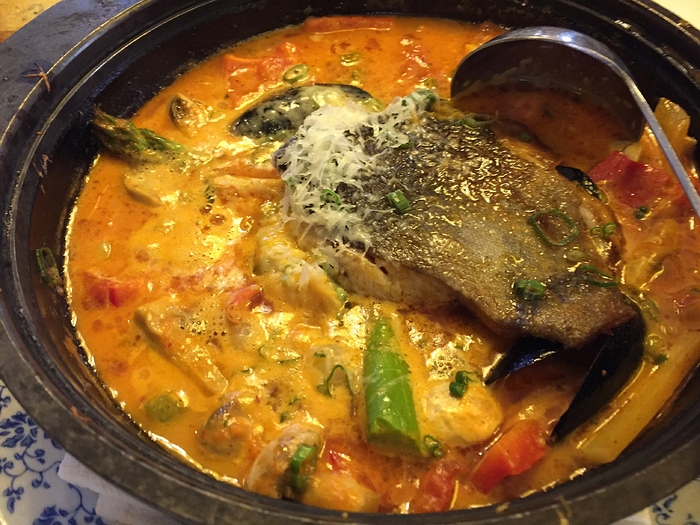 Some sort of stirred fried veggie and potatoes, including sprouts. Decent. 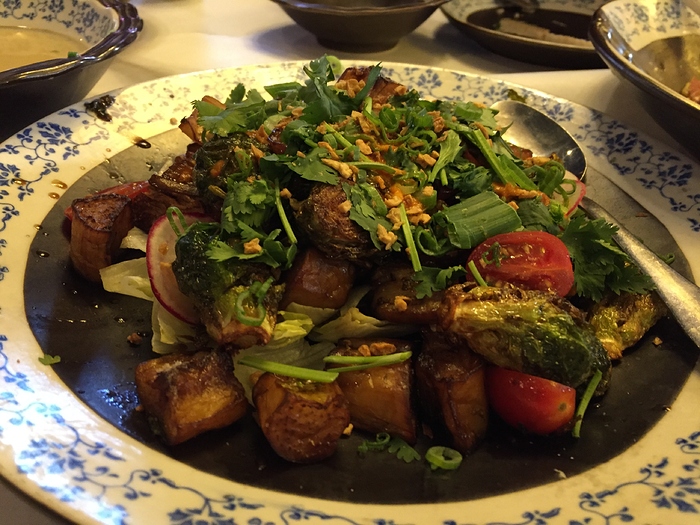 Still have to try the duck.

Unfortunately the Kumino China location is now Shanghai No. One. Does anyone know where Haochen Liu is cooking now?