I wondered if we had gotten there about 8, perhaps no wait? Or gone on a weeknight? Was there still a line when we were seated or was everybody waiting in line at 5 pm seated?

I wonder if I stood in line and tried all those places, would I agree they were all worth it. Probably not. There was a lot of bad rock 'n roll.

Jaymes and I were conversing on eG about this month’s DOTM and she said since she lived so far out, she was just going to go to HEB and see what she could put together. She has a much better HEB out there than I have where I live so I thought about going to Trader Joe’s where I know you could get some interesting meats and cheeses. But I don’t have a TJ’s near me either. Then I remembered the Russian General Store. 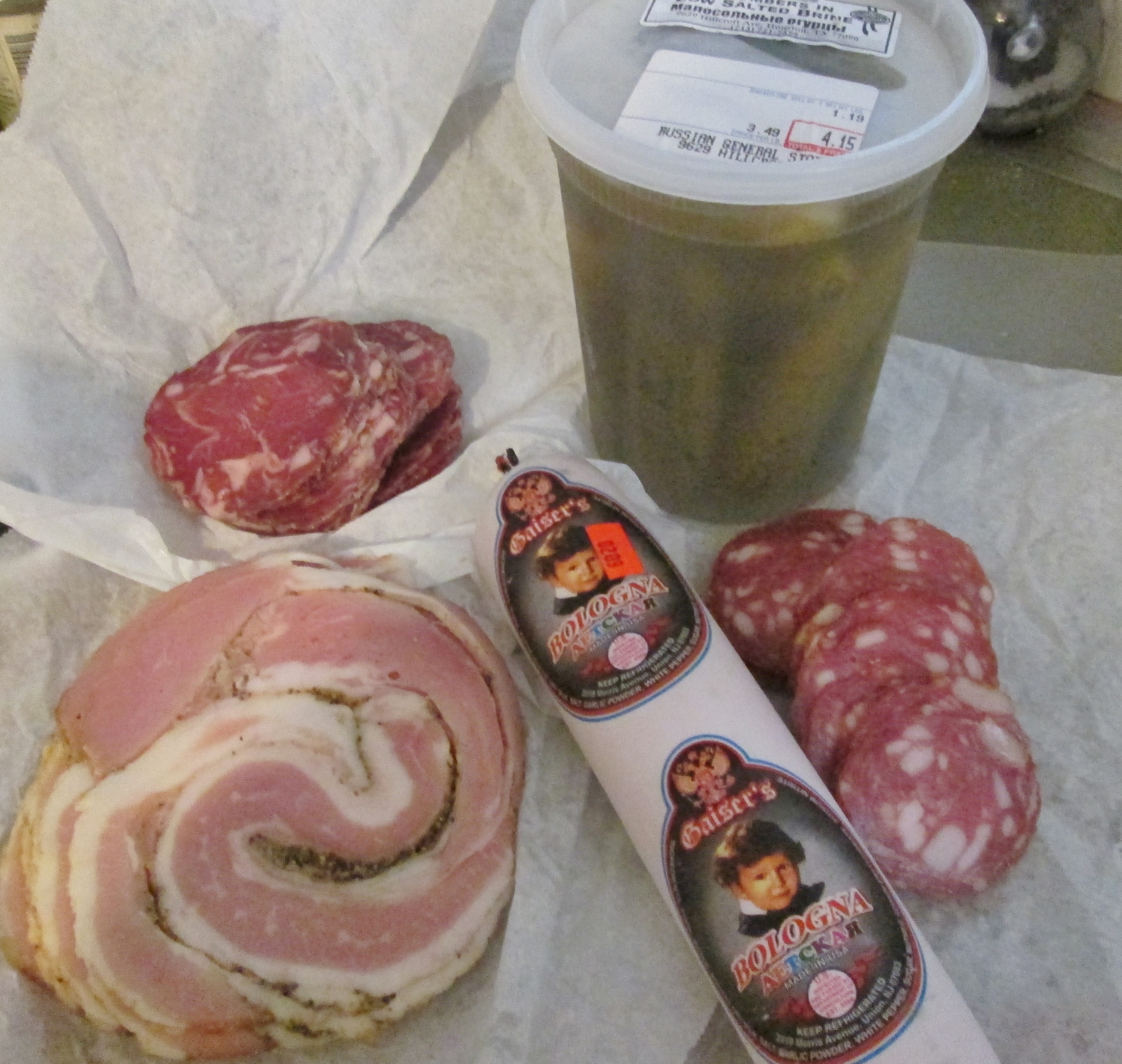 They have a huge selection of salamis - maybe 4 dozen varieties or more. They also have numerous bolognas and wieners. After staring at the meat case for about 15 minutes I made some choices. I’ve never explored their salamis much so just took a chance. In the upper left is a variety labeled Hard Coppa Salami. I think the brand was Gernon or something. The pickles are ‘Cucumbers in Low Salted Brine’ - store-made. I always buy some when I go here, if they have any in stock. The meat on the right was labeled Old Kiev Salami. The bologna is not the best I’ve had from there, which wasn’t in stock, but it’s pretty good. And obviously the one I had to have as soon as I saw it, in the lower left, Veal Roll.

I don’t think they make any of their own meats. Their cheese selection is no where near as extensive or even interesting but I thought I had some at home. 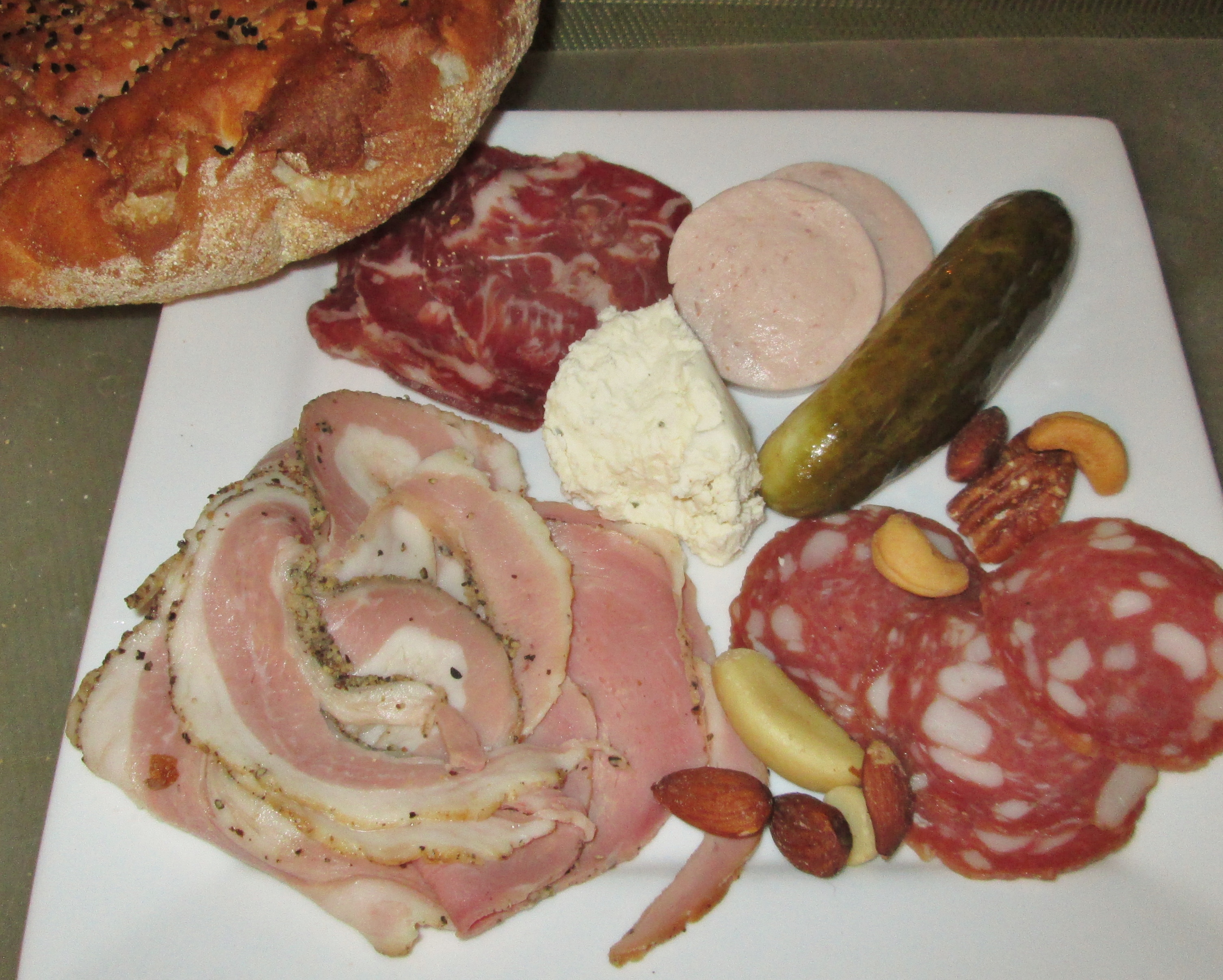 The cheese is boursin; the only other cheese I had in house had to be tossed and there’s no place any where near me to get interesting cheeses. The bread is Armenian Matnakash from Phoenicia, one of the best breads I’ve bought there. Aren’t the owners of Phoenicia supposed to be Armenian? The crust is brushed with sweetened tea essence giving it a good color and adding a subtle flavoring.

When the bologna gets all the way to room temp it’s very good but the real smash hit is the veal roll.

So there’s my Russian-Armenian-French-Italian cured plate. I’ll be applying to the city soon for a permit to open my own Salumeria.

Come to think of it, I bought a bunch of meats recently at Polonia the grocer after visiting Polonia the restaurant for dinner, including the mortadella so prized by some in my house. I forgot to post it. BTW, it’s the first time at the new restaurant location and I was impressed with the upgrade. Still mostly Polish speaking folks there. I ordered my favorite dish, the sausage and kraut, and was a bit disappointed in the links. On previous orders, the sausage was cut from a larger sausage and was more flavorful. But it had a Polish flag stuck in it, soo… I was craving a salad too and the dinner salad was presented all perfectly laid out. Made me smile to see pickles all perfectly placed around the rim.

Here’s some pics of the dinner at least: 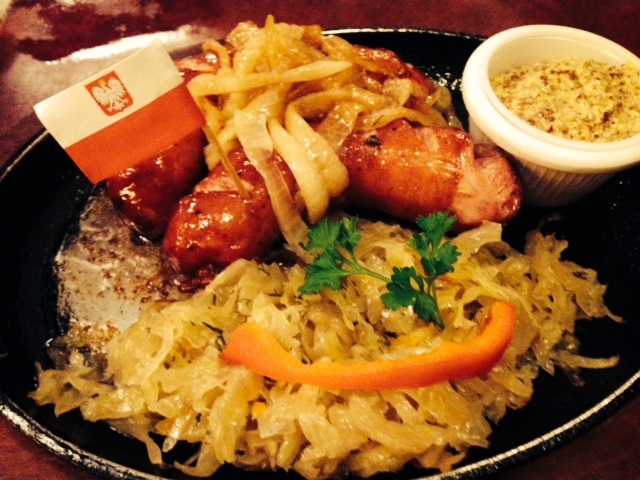 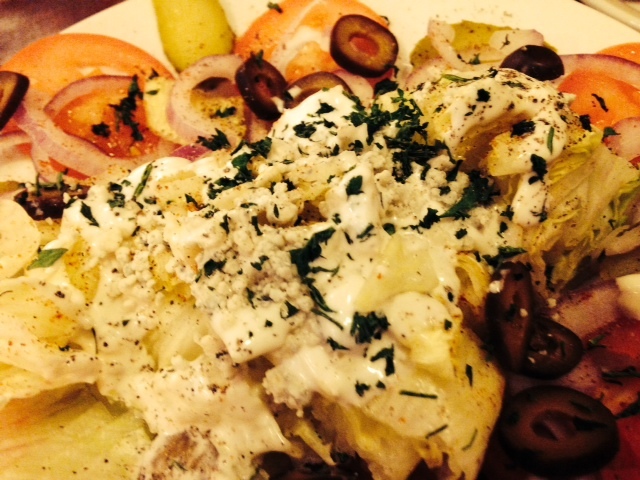 Wow. Looks so good. They have some good sausages - correction, great kielbasa - at the grocery store but I guess I’ve never tried the mortadella. Will have to. I have a Forest Sausage from there in the freezer; I could have added a couple of slices to my plate if I’d remembered.

Well now look at this. If we’d waited a couple of weeks, instead of standing in line in the sun we could have had Uber bring it to us.

Costa Brava Bistro, in downtown Bellaire, had always been on my list of places to try, partly because it’s geographically the closest to me. After hearing the Lambowners rave about the food they encountered in Spain on their vacation, it moved up on my list. 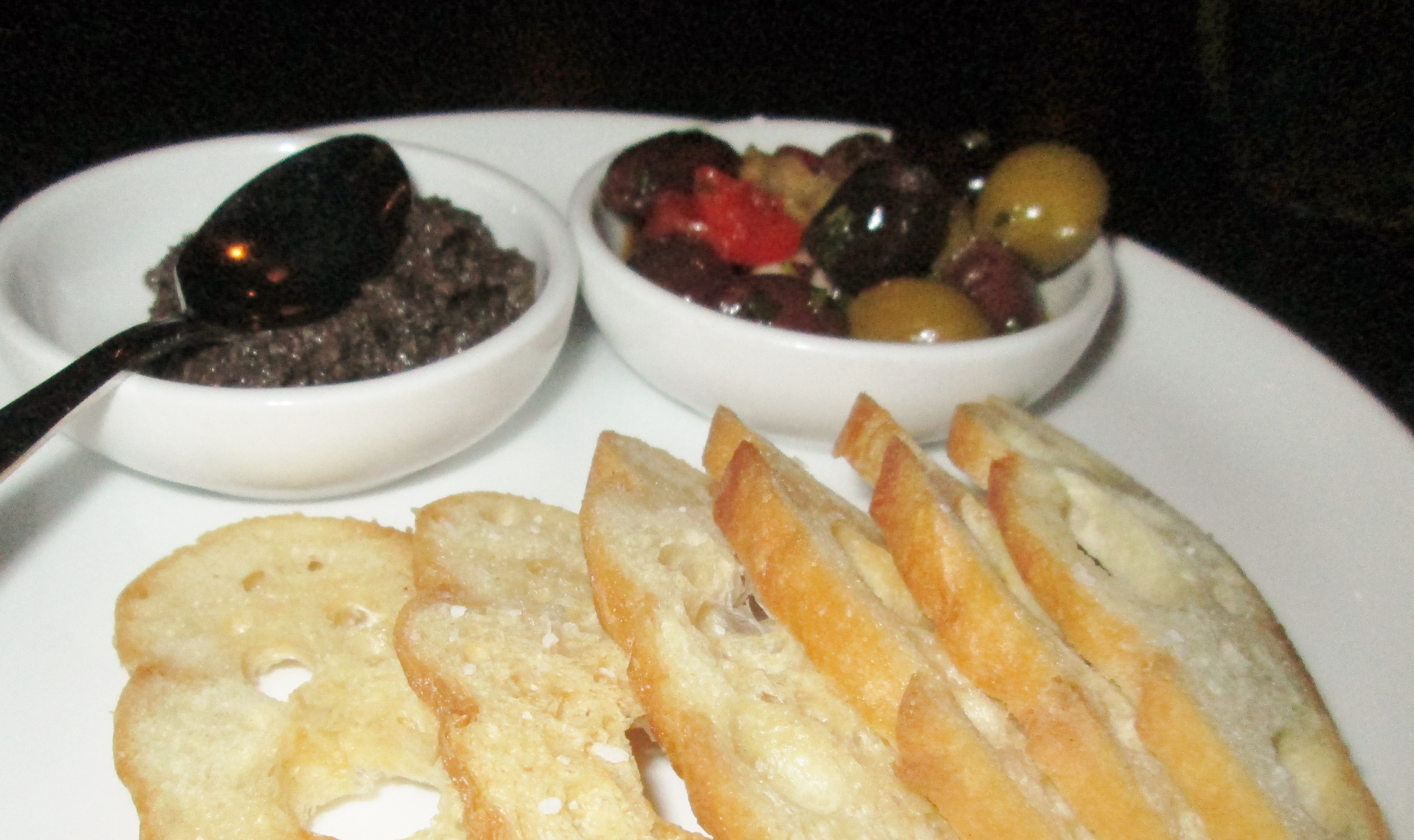 The meal starts with a complimentary olive plate with mixed olives, tapenade and toast. I also ordered Gazpacho Andaluz with cucumber relish, a huge but very shallow bowl. 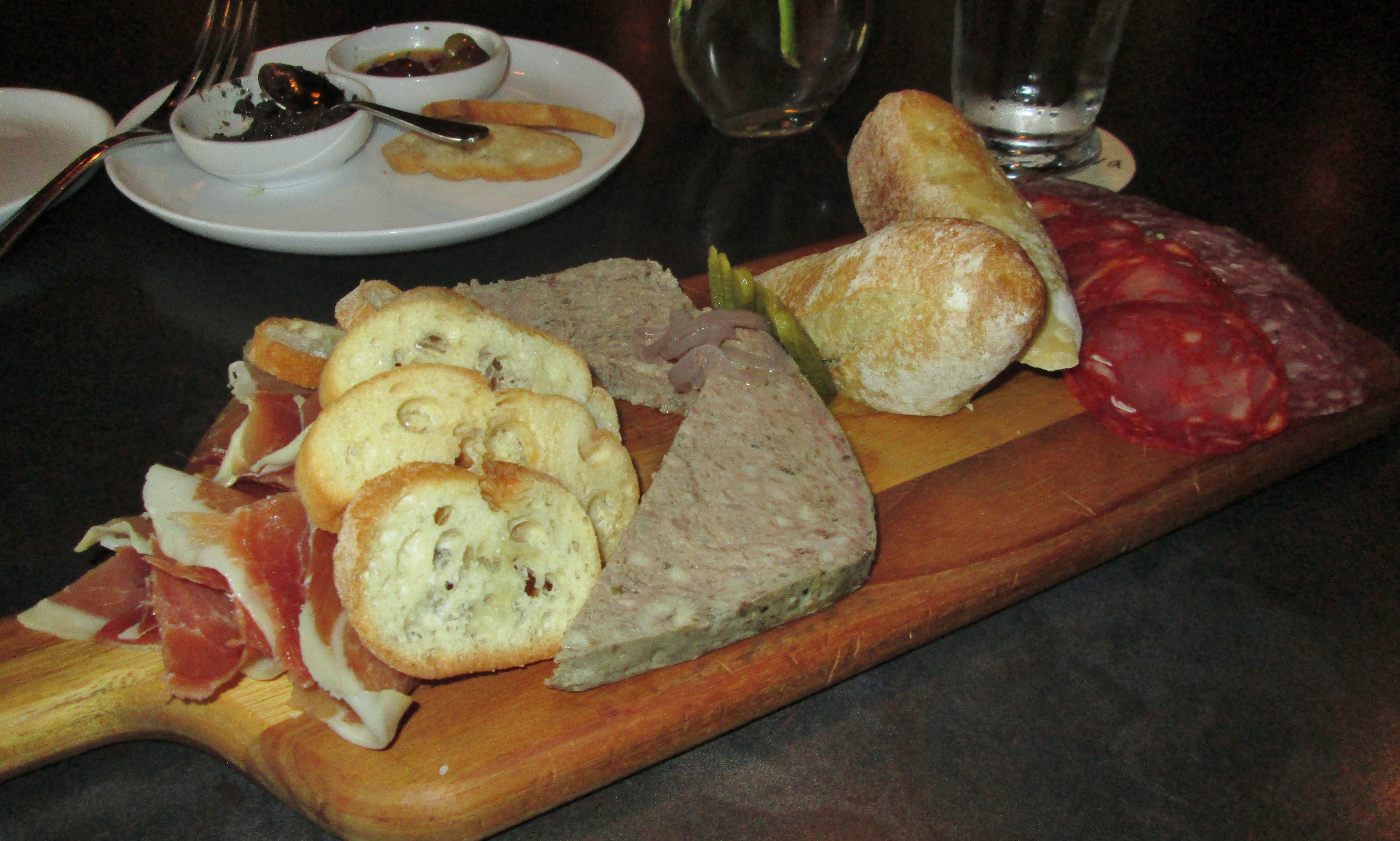 From the left, Jamon Serrano, Pate de Campagne, Spanish Chorizo and Spanish Salchichon, with more toast, a warm baguette, and pickles and pickled shallots. I had expected the hit of the board to be the Pate and it turned out to be the Chorizo but it would be hard for me to choose between that, the Pate or the Jamon as the best item. I thought the waitress had described the last meat as salame but the menu says salchichon.

The waitress had just rolled her eyes when I said that would probably be all I wanted and said ‘Probably.’ It was. These boards don’t actually involve a lot of food but they are very filling.

They have several other appetizer options which pair one meat with one cheese.

This is unquestionably the most upscale eatery in Bellaire. Residential neighborhoods, especially in the eastern part of town, have been gentrifying for decades but the commercial centers have lagged far behind.

Verdict: very good. The word that has occurred to me over and over again as I have partaken in this month’s DOTM has been sybarite. I didn’t feel quite as sybaritic after this one as after the big boards/trays at Revival and Coltivare but it was very satisfactory.

Another thing about this month’s DOTM: it’s not something you want to tackle every day. I have several more on my list and I’ll try to work at least one more in before the end of the month.

10 minute delivery time? What planet are they on? Hehe. I’m guessing these are prepackaged orders you choose from?

Hey everybody!! Thanks for the head’s up Bruce! I got tired of CH a long time ago but it was mostly about the NOLA board. It started when I posted about parking at Casamento’s and how you might have to park in a surrounding neighborhood so be cautious of what you leave visible in your car and they went cuckoo for cocoa puffs on me. After that it was all downhill. They reported my every post to the admin after that. Glad y’all found this place. I’m looking forward to making one of the get-togethers. Did James Cristinian make it over here to HO?

He’s on the way. Think our next DOTM is going to be fried chicken. Really happy to see you here, TRT. That undoubtedly will mean a trip to Barbecue Inn, so am looking forward to seeing you there.

Yes Yes Yes, Barbecue Inn. Haven’t been in several years. I’m a huge fan of Pappy’s too. Had a bite of their lemon pepper chicken and it was so delicious. Love their burgers and fried pablanos too.

I’m still figuring out how this board works, I just saw this 18 day old post. Hehe.

I’m leaving this here just FYI. I tend to forget about Charivari, and old world eatery in midtown. Very old school service and menu, but worth a visit.

I checked out the TJ’s thread and saw they now have nduja. I was going anyway to pick up some cheeses to take to my Christmas pot luck tomorrow and I bought some. Actually, the product is ‘salami spread’ I think, the word nduja is off to the side of the package. Think deviled ham made with salami and tomato paste. Nothing like the awesome stuff from Coltivare. Not all ndujas are created equal.

Should I be surprised?

I had never even heard of nduja until this thread, so when I saw it at TJ’s last week, I picked up a package. I haven’t tried it yet though.

IMO it’s best when it comes completely to room temp. It has it’s uses but not scarfing it down like we did the stuff at Coltivare

. I don’t plan to demand my money back but won’t buy it again.