Finally made it there to pick up a couple of Pain Au Chocolate and this was the flakiest croissant I have had outside France.

finally made it and glad i did. tried the biscuit with butter and jam along with the croissant — a lot of carbs, but it’s thanksgiving weekend, so what the hell:). both were outstanding, as was the hot chocolate. happy to see that the small selection of mem teas includes my favorite — chai cascarilla.

lots more to try so i will be back.

And I also finally made it here 2 weeks ago. I was meeting up with a friend mid-afternoon so I wasn’t particularly hungry. She was and got a breakfast sandwich and a chai that she said were both scrumptious. I got a bunch of mostly savory things to go, since I don’t have a sweet tooth but I live with 2 people who do: an awesome veggie focaccia, loaf of olive bread, slice of cranberry walnut cake with delightful candied cranberries (even I, the sweets curmudgeon, liked this cake), and a cookie (no clue about that one, but the guys seemed to like it).

I went back this week for some bread, but they only had asiago, which is not my favorite. But I did pick up 2 everything croissants. Genius! B and I scarfed those up. In between all the holiday craziness, I need to get back there this weekend for bread before the family converges on Arlington (the first time in 5 years). I’m out of family hosting practice! 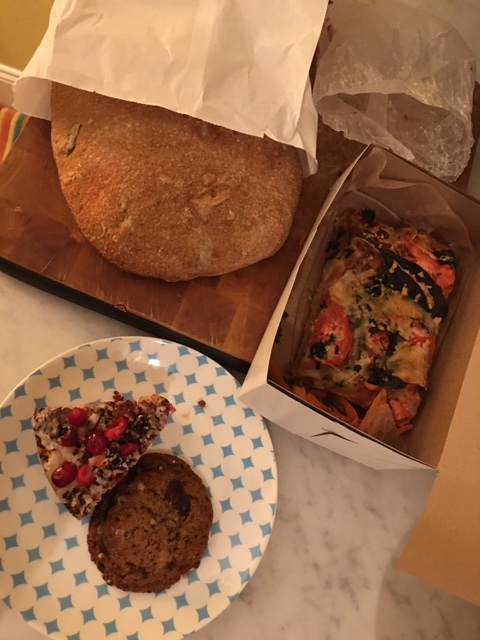 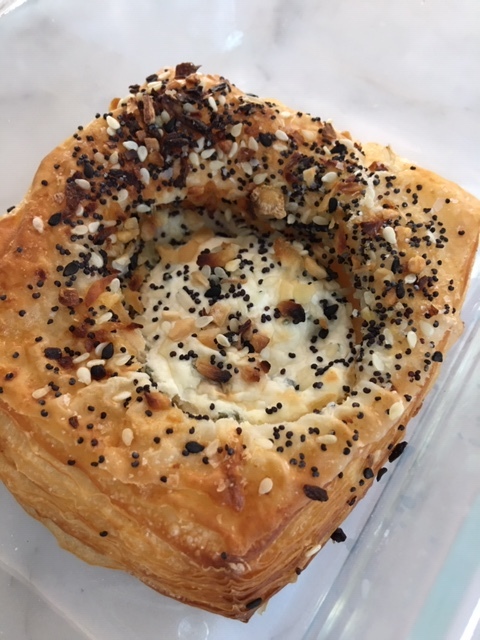 Agree that the everything croissant with cream cheese filling is pure genius. A tad too salty for me but did not stop me from devouring it. The ham and cheese one was fine but not a patch on the ham and cheese croissant from Moonbat City Bakers in Belfast ME so I will hold out for those. Just as well…

ETA: very attractive space, huge upgrade over Bagels by Us.

I found their olive bread very heavy, with a damp, dense crumb. It was about 1.5" high. It did have a lot of very olivey olives, but was otherwise a bit unpleasant. Made OK toast, though. How was yours?

I’ve also had their cinnamon raisin bread. That presented problems of its own. It’s one of these breads constructed like a jelly roll – the dough is rolled out, spread with raisins, sugar, cinnamon, etc., rolled then baked in a pan. But it was rolled so loosely that there were such big pockets of air in it that slicing-without-disintegration was very hard. The shards were tasty, though.

No olive loaf malfunctions as far as I can remember. But I’m also in a Kobe mind haze right now.

It’s hitting me hard despite his complicated history. (I was the shortest point guard in history in my high school a la Muggsy Bogues.) So needless to say, a b-ball fan.

finally made it back. sad to see they’ve discontinued the chai cascarilla, but they brewed me a pot of the spicy chai, which was fine. as was the chocolate croissant — actually more than fine — as good as any i had in paris.

consider a ham and cheese croissant, but the top was sprinkled with poppy seeds, which didn’t appeal to me. so i tried the savory hand pie. the pastry was great, but the filling was under seasoned, and so heavy on potatoes i couldn’t taste the mushrooms .

but if nothing else appeals, there are always the croissants, so i’ll be back.

i tried the savory hand pie. the pastry was great, but the filling was under seasoned, and so heavy on potatoes i couldn’t taste the mushrooms .

I agree on the hand pie. My filling was chickpeas and potatoes, also very underseasoned (even under salted), but the pastry around it was good.

I have to get back and try the croissants.