I tasted Urquell and Peaceful Pils side by side yesterday. Peaceful Pils was lighter and hop forward - it was a pretty typical lager. I actually like the Urquell more - nice malt flavors and I enjoyed the finish. I had another beer in the fridge Reality Czeck from Moonlight Brewing which was similar in flavor profile as Urquell but just better in every category.

I didn’t know at the time, but Peaceful Pils proceeds directly supports the work of World Central Kitchen.

Catching up with some Estonian beers I have lying around. Pühaste is a micro brewery but they make a lot of different styles, not to mention they have a wide distribution network. I have tried many of their beers and will continue to do so. 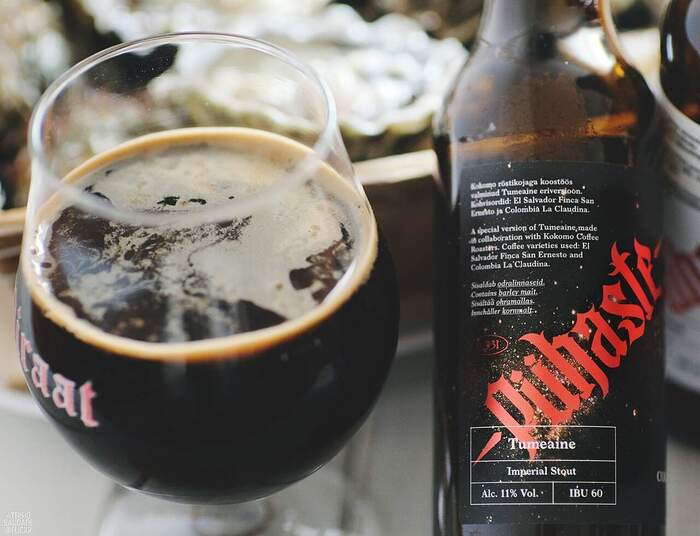 Pastry stout. Like drinking a chocolate cake. Heavy and alcoholic. 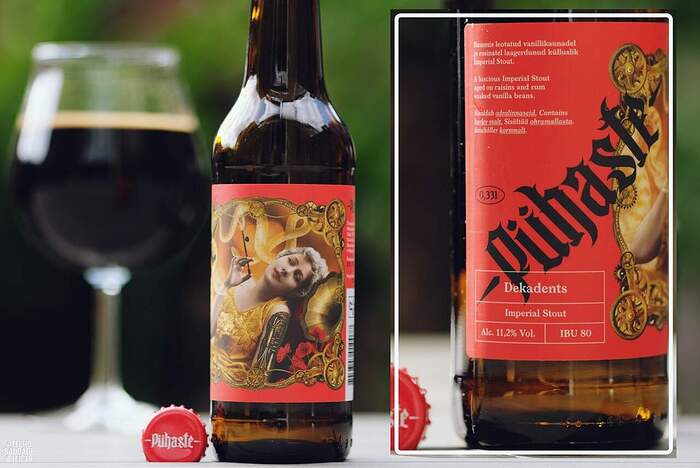 Porter. Unfortunately, I only taste the anise. Just a little is bearable. 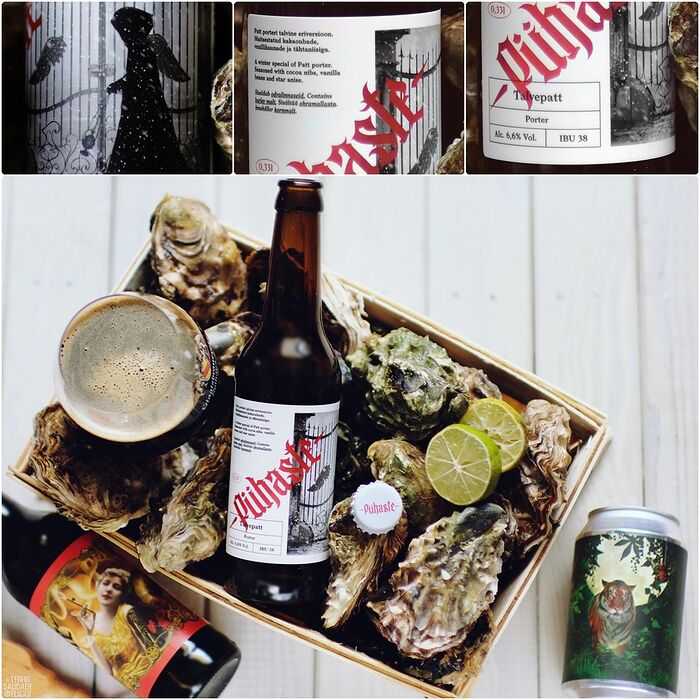 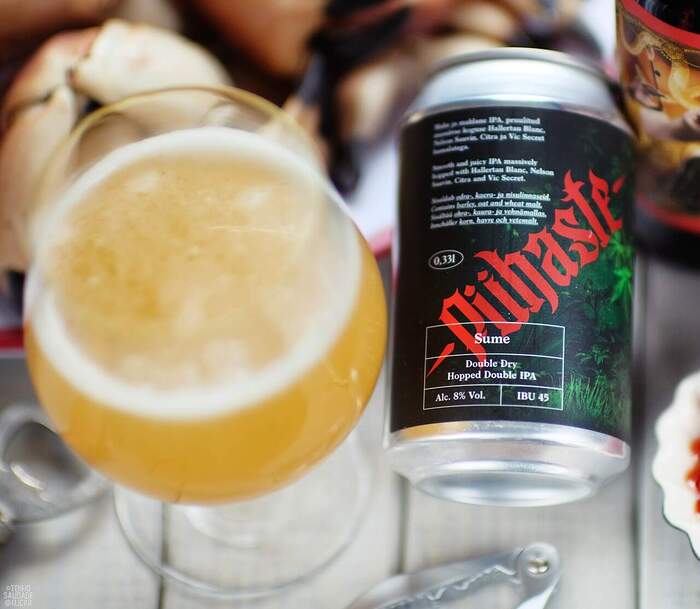 Tasty NEIPA. Juicy and only a little bit sweet (but gets sweeter when no longer cold, still more sour though). Citrus, papaya, melon and sour pineapple. Creamy and hoppy. Surprisingly bitter. Drinks almost like a DDH NEIPA (also surprising). Sometimes it’s the other way around (DDH that’s too weak). 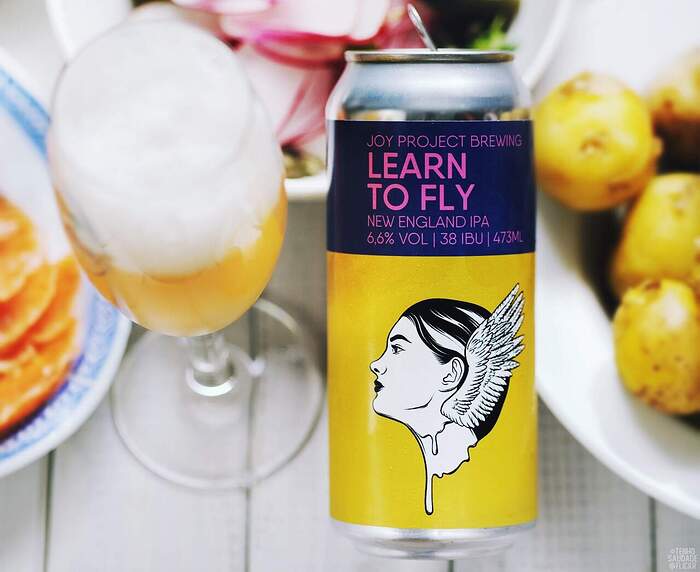 I feel you when you shed light on the one note stuff. Anise, in this case. I love the anise background, but, front/center, it doesn’t belong. I felt the same way about a vanilla porter I had a year ago. It was just a headache to drink. Didn’t even feel good about making brats with it.

Sounds like you had some good tastings, though. Always makes for a good day.

Aged in a mezcal barrel? Gutsy, if nothing else.

I do tend to like imperials. Probably the heaviest brews I can drink. Never found the soft spot for barley wines and such. Estonia sounds pretty cool to me.

Seems anise is a popular profile on darker beers. Makes one wonder if they don’t throw a few stars in the wort.

The anise notes should come from the malt. Just that little surprise. Love it when you get it in the nose before you drink. Grand imperial porter-Poland. Why that’s my latest addiction.

Just saw it in the store. From the land of sky blue waters (waaaters). This was my best bud’s go-to in college. I chose Huber bock as my $4 a case beer.

Being a Czech beer lover i was so happy when I found a new (for me) beer from the Czech Republic, Star of Pilsen. This is the first-time I’ve been disappointed w/a Czech beer. Now I know they’re never as fresh as you get over there, but the Czech bottles are usually very tasty (all of 'em) and true to the style. However, this brew was a weak imitation of the classic. So i did some digging and couldn’t find much on this “brewery” What i found was, incorporated in 2010 on google maps the address looks like a typical Czech building in a small town, not a brewery. At least it wasn’t stupid expensive like some local brews (Breuery etc)

Sierra Nevada makes a lovely stout. So does North Coast and Bells makes quite a few as well. You’re right about the lager style, I haven’t found one American lager that I would brag about.

Hermit Thrush out of Brattleboro makes some nice sours, trad and kettle soured. I’ve had 4 of theirs so far and loved 3 out of 4.

Old Rasputin is a great beer.

Never had Star. My fave Plzen is Velkopopovicky. Can’t find it any more, though. I’d be happy with a lager that came close to Urquell. Still haven’t had time to find the recs from here, though.

The kicker is, even if I find Urquell’s equal made here, it will probably cost more than the original Plzen. Just tired pf paying for beers people have gushed over only to think “meh.” I really want to source my brews to US only.

I’ll have to find Death & Taxes and Reality Czeck and try. Just seems like, when I compare a micro US Plzen and Urquell, a vail has been lifted when I quaff Urquell. There’s a fuzziness, maybe due to lack of aging, I’ve found present in every US micro lager I’ve tried. The flavor reminds me of the first batch of beer I ever made, when I used a bunch or corn sugar to “assist” the malt. I was just glad it turned out, being my first. But there was that adjunctive film on your tongue feel I get from US micros. To a lesser extant than my first batch; but it’s still there. From the first micros until right now. I’ve always gotten that strange extra sumthin’. I still think it might have to do with aging. Euro beers are forced to age if the come here. I don’t find freshness and beer to go hand-in-hand flavor wise. Born on dating was the funniest scam to me. Bud already sucks, now, it’s fresh and sucks even worse. I see that fad has died.

I fully respect Honkman and Jondough and their choices. I fully respect both opinions as knowledgeable brewlovers. I want to be the US micro lover. But, from where I stand/taste, the safe beers are safe from our producers. I wish US micros would sell more single cans, so you’re not stuck with 5 crappers for $10. New Belgium, Summit, Sierra Nevada, God I can’t remember them all. They all had that corn sugar effect, or aging issue. Wish I had time to experiment with some recipes, but homebrew has gotten pretty pricey.

I’ve been on a euro kick of late. Trad beers, well made and reasonable pricing. The core Sierra range is still great and in NYC you can always get single bottles and sometimes cans. I’ve yet to have a Pilsner style American beer that was anywhere need as good as the original. Though I’ve heard great things about Notch from the North shore in Massachusetts. Schilling Beer from NH has been the closest , so far.

Not sure where you live but normally it is really not that difficult to buy single cans/bottles. I can’t remember when I had to buy a packs of beer.
I have to admit that I am quite surprised by your love for Urquell which I would even within the many pilsner options in Germany/Czech as lackluster at best without any spark or quality.

I like Urquell. Maybe it’s partly the nostalgia, but mostly malt and hops. So Death and Taxes comes in a single serving? If I find one, it’s bought.

I’m not kidding, since early 80’s Augsberger, I’ve tasted the same off notes in pretty much every micro I’ve tried. To me, it always felt like thee brew wasn’t aged for long enough.

The reason I started with Heineken was that it was the everyman’s blah beer. Urquell is much better. Urquell was the first version I tried (1985). I was impressed, and I still like it. I can’t believe you don’t taste this slightly bitter (honestly tastes like raw corn sugar to me, just not as blah) adjunctive flavor in the micros. They’ve actually gotten worse since Augs of the 80’s. Urquell is middle of the road. I’m setting myself up for disappointment every time I try this. I live in western WI, near La Crosse. I jujst never stop by the US micros anymore, since they all taste a little off. Go with another middle of the road: DAB. Nothing made here can compete. I want you to flip my script. So many of these micros, might take me 15 minutes to find, if they have them. Next week I have a few days off. I’ll go hunting. Little busy at work lately.

I have to admit I’m quite surprised when I read on forums how great some of these are that are nowhere near their Euro counterparts. Urquell. Boring ole Urquell. Nothing close that I’ve tried.

I can remember a few: Heater Allen. This was supposed to be superb. More mediocre than any Urquell, I’ve ever had. I thought Oregon would yield lovely malt. Again, maybe just wasn’t aged for long. Sierra Nevada Noon something. Ho-hum, shave the tongue finish. Live Oak. So thumbs down. Summit Keller pils. Don’t even want to talk about it. Wanted to support my neighbors in MN, but Grain Belt is better, and old Grain Belt was better than that.

Either way, it’s all good. The beers that were good for me, aren’t good to you. The beers that you might like, I might despise. Let us both enjoy our consumption. Got a few Sam Smiths in the fridge. Love their oatmeal stout. Hope you enjoy what it is you’re imbibing, bud.

. I can’t believe you don’t taste this slightly bitter (honestly tastes like raw corn sugar to me, just not as blah)

That’s what I don’t understand - you write as there is only one approach and flavor profile for pilsner with craft breweries in the US (or elsewhere in the world) which couldn’t be further from the truth. I am not sure if you haven’t actually really tried a large variety craft lagers (can you actual name the craft lagers you have tried) or you can’t taste the significant difference between them. You tend to name European lagers which even in Europe many people tend to describe as acceptable at best.
And no offense, but to be honest I am not sure if you are even willing to change your mind with craft beer as you seem to be on a self-fullfilling approach where you are looking to hear that Urquell, Heineken are the best for you.