What are your favorite dishes at Cha Yen? I have still not been there yet but hope to pick up carryout soon. Thanks for your posts on this new, exciting restaurant.

Last time I was there Jeemui/Manita made me this beef short rib massaman curry which was whew, so groundbreaking. It was like a beef bourguignon actually with small potatoes and carrots. But it didn’t have coconut curry because she personally does not like coconut milk, so it was just the deep red very concentrated flavor with fall off the bone goodness. She also brought out these new rollups which were novel and very good. But those are new specials and one is actually from the menu at Kala Thai Cookery in Boston, her other slightly different resto. She just wanted to show me that.

But on the regular menu, as it stands, Shrimp Donut is irresistible, all the apps are special in their own ways and something will wow you whether it’s the skill in execution or novelty of prep. The Sukothai noodles, most regulars will opt for egg noodle and duck, is probably a “signature” dish and no other place in Boston has dared to ape that in over 6 years. She prefers it with ground pork and smothered in chili flake herself. Over time, she cut back on the amount of sugar placed with the other condiments, which is probably a good move, more balanced. Overall, you will find every single ingredient is perfectly cooked and placed. So impressive. The Mushroom Larb is still as good as when I had it as a solo diner in an empty store with just her, me, preppers, 3 window bar seats and a kids IKEA table. It has the 4 different types of mushrooms even though she had to switch sourcing from Russo’s when they closed. (Russo’s was clearly the best source for Asian veggies.) I got through about a third way through the menu by eating 3 dishes 3 days in a row or something like that.

I’d start there and move around the menu. Her “standard” dishes she cannot move the needle terribly much on innovation, but everything is done with elan and bone crushing “wok hei”. Manita is petite but she moves a wok around harder and faster than any 60 year old Chinatown veteran with a cigarette hanging out of his mouth. The curries are more like a thicker coating instead a bowl of gravy, more sophisticated. Again she is not a fan of coconut milk.

Of course you have to sample the ice creams. Not an option not too. Try Thai Ice Tea flavor to start. Prices are modest and she could charge double in Boston or Cambridge and she knows it but she believes in feeding everyone. She made a very valiant stand during 2020 and kept her crew.

It’s basically my favorite resto in Boston area. She has novel execution, bold flavors, high end dining in a casual atmosphere and she’s extremely personable even if I can’t chit chat a lot with her like in the beginning.

I have no problem declaring Cha Yen one of Boston’s best restos in any category and probably among the best Thai restaurants in the USA. I have tried a dozen or so places in Queens, Manhattan and even though they bring in the various high horsepower northern styles, they just don’t have the torque Manita has. She just floors it and goessss. She’d be declared a genius in the city and have a Michelin star or Bib Gourmand, at least.

Cha Yen has been on my to-do list forever. Gotta get my $#!t together and get my butt over there.

Clearly you are a person of many discoveries, @tatsu. Your detailed reporting is awesome!

I’ll be excited to try your finds when we’re getting out to restaurants again (stinkin’ virus, bah). It’s good to have finds we can look forward to in any case.

Thank you, I have been online since the 80’s on netnews and joined CH in the 90’s, I love getting the scoops!

I’ve eaten twice so far at Cafe Vanak in the former Seta Cafe next to Sophia’s Greek (yogurt) and it might be the best kabobs in the area right now, plus a healthy selection of real entrees like lamb shank on rice and others. I had pomegranate and walnut sauce on chicken, wowzers, like a Persian mole sauce. Watertown/Belmont boasts 4-5 Persian places now, plus Mediterranean Grill on Mass Ave in North Cambridge. Boston isn’t LA quality yet, but Vanak is approaching that level. Plus the accompanying market called Super Vanak lives up to it’s name. It isn’t a “ethnic market” or bodega kind of thing it is a full on mini super market with just about everything you would ever need to cook any Persian dish or any kind of food, replete with meats, dairy, dried goods, grains, teas, pickles, sweets, etc. Just not a huge selection of fresh veggies, but they smartly decided not to compete with nearby Arax on that front.

Just up a block you can see a Thai restaurant which is the original location of Gustazo, one of my favorite places now in Waltham and Cambridge. Their evolution is quite extraordinary from a purveyor of simple Cuban classics like Cuban Sandwiches to a full on fine dining experience with excellent cocktails. As flush as it is, I’d rate it almost as good as long time favs like Oleana, they have not forgotten their roots, even if they don’t have a traditional Cuban Sandwich anymore and the fancied up version of their Guacamole is not as tasty as how they originally did it, and how I make it at home now, with pineapple. Minor quibbles for a fine dining destination that has a non-stuffy easy going feel to it. Gustazo has managed to transcend their “ethnic” background to just being an excellent establishment. It is unfair to typecast them as a “cuban restaurant” in my opinion. This is very uncommon.

thank you! These are great suggestions. I hope to get there for carryout soon.

Both Cha Yen in Watertown and Kala Thai Cookery in Boston have carryout and delivery. Unfortunately in East Somerville I am outside of the delivery area for both. I had always been planning at trip to Cha Yen, Russo’s, and Arax Market for some day soon. I can still do 2 of the 3!

Well, all we have to do here is keep asking questions and you keep coming up with more gems! I heard about Vanak somewhere and it was on my list, too, along with stopping in at Sophia’s. I’ve often thought I should just move to Watertown. I was meaning to try Gustazo, too, pre pandemic.

Our dear yum yum would concur.

Thank you, I have been online since the 80’s on netnews and joined CH in the 90’s, I love getting the scoops!

yeah, I checked this out a few months back. Cool market, the people were super nice as well.

We tried House Beef in Tinfoil, fiery, cuminey, and strangely comes in aluminum foil not tin.

The owner says the Jiang Nan sign is still up because the City of Waltham won’t let them change for another 1 or 2 months despite having already paid them $600. Outrageous! It’s really hurting their business I would have discovered it in November, I pass by enough. One guy ate alone and a few takeout orders went out from 445 to 615pm. One guy was told “Oh you order on Fantuan? No no call me instead, Fantuan is such a ripoff!” lol

They also have a WeChat group offering free dumplings if you order more than 40 bucks, but so far I haven’t seen those. Anyway I’m all about the shumai!

Miss eating out with her…

Good to know this place has not declined since the opening of the sister restaurant inBoston. I was afraid her attention would be diverted to the big city.

Manita always innovates and pushes herself, she is an unstoppable force. She is in the same class of chef as any around here, Faison, Adams, Gilson, whomever you wanna think about and she’s still very young. Her creativity, formal western training and mastery of various techniques, plus innate iron-clad execution makes her an ideal contestant for one of those cooking contest tv shows.

So it turns out one place in NYC does offer Lamb Shumai. It happens to be a new location of a restaurant that closed last year, it was called Jiang Diner. The new place is called Jiang’s Kitchen, and it also offers halal western Chinese food and the Shumai, it looks pretty much the same. From my studies, A Lee 88’s is more authentic. Here’s a pic of Jiang’s version. I would venture to guess they are not rolling out their own skins. It doesn’t have the side creases and the tops are uniform thickness and doesn’t crown as much. They are also smaller as a consequence, they probably cannot obtain ready-made 5-6" wrappers.

I have seen restaurants start out making their own dough and wrappers for dumplings only to quit doing that and going to pre-made, so if you want to try it at A Lee 88, which is virtually identically to Inner Mongolian versions, I suggest getting over there soon. 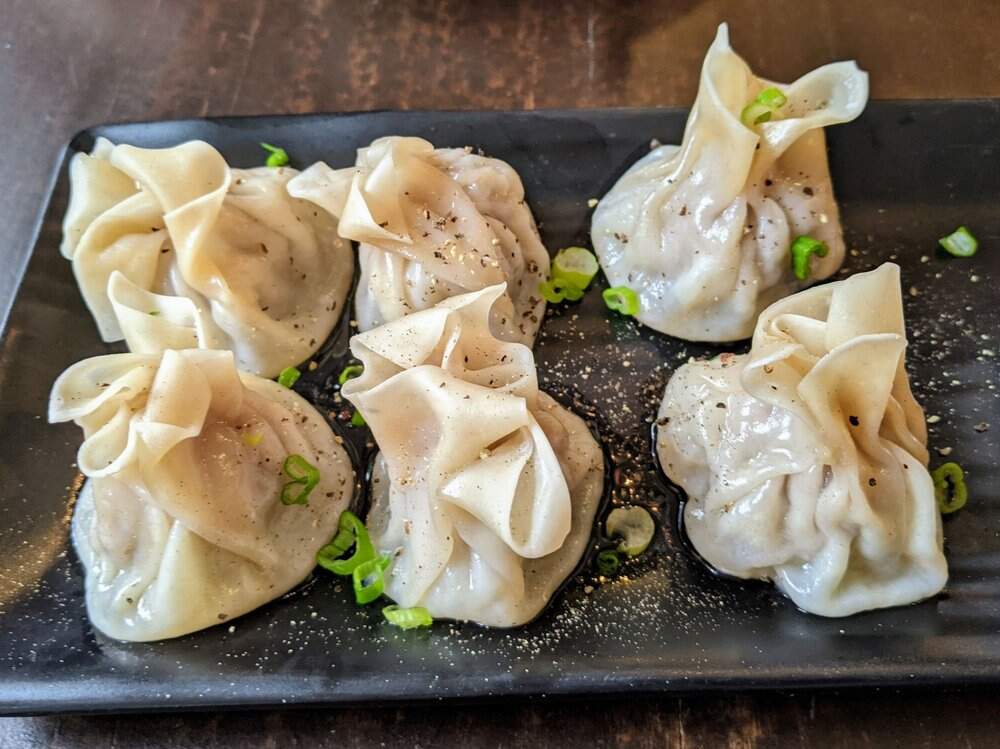 Wow, this looks intriguing. Thanks for the tip!