Could you elaborate on the balancing and freeze drying?
I tried blueberries in my dehydrator but without a lot of pricking of each berry with a needle it wasn’t very productive!

Spiders are an absolutely fascinating species. Every once in a while I can’t sleep at night . I go out on the front porch.and they are just spinning away. The whole web is done. In the morning it’s gone…

Elsieb, the pretreatment for dehydrating or freeze drying blueberries is the same: remove any stems, wash and drain. Using a large sieve, spider, etc. dip the berries in boiling water for 1-2 minutes until the skins are cracked. Depending on the berry size and ambient humidity, dehydrating at 100 degrees F (38 C) takes about 10-24 hours.

For most dehydrators, you’ll want something under the berries to catch any juice runoff. Aluminum foil comes in handy as a bottom “tray” in my cube-shaped dehydrator. A small weight may be needed, depending on fan speed and direction.

This information originally came from The Dehydrator Cookbook, by Joanna White, and was slightly modified, based on experience.

I haven’t tried it, but have wondered if freezing the berries first might crack the skins; it might be even messier! It might not be as consistent, either.

The Harvestright freeze drier has computer-controlled cycles, which go through: a deep freeze>vacuum while frozen> slight warming of the food trays to cause water to sublime out of the food. The water/ice in the food does not melt into water under a high vacuum. Instead the water/ice in the food goes directly into a vapor/gas state and forms a solid ice on the walls of the freeze dry chamber, which are colder than the food trays.

Unlike dehydrating, freeze dried foods generally keep their shape and rehydrate faster. In some cases, like mushrooms, one is better off using a dehydrator, as the food tastes better and the texture is better. In fact, most folks in China prefer dried shiitake (Xiang gu) because they develop more umami flavor as they dry. Personally, I like both fresh and dried, but there are recipes where dried work better, like mushroom soups.

Thank you for all that info. You are such a generous source, much appreciated.

You’re most welcome. Knowledge unshared dies, and while it is present, loses most of its value. 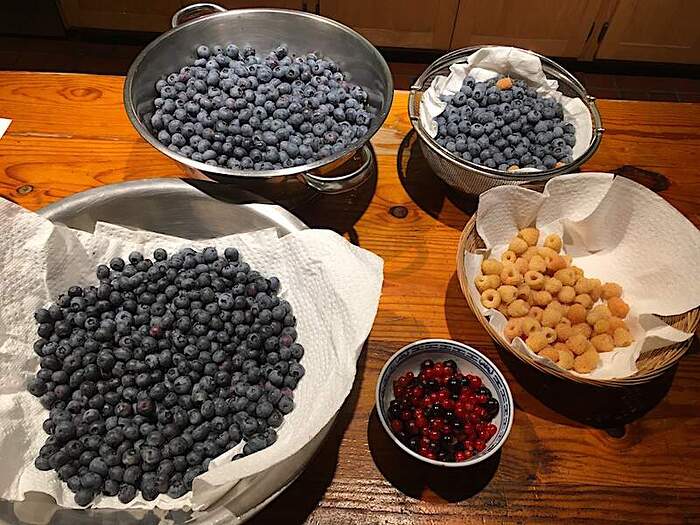 The big colander of blueberries, the yellow raspberries and the bowl of red/black currants were picked yesterday. Lots of processing going on!

With your user name, I expect cranberries.

Here’s a picture of your I-think-two-year-old Aji Amarillo plant. 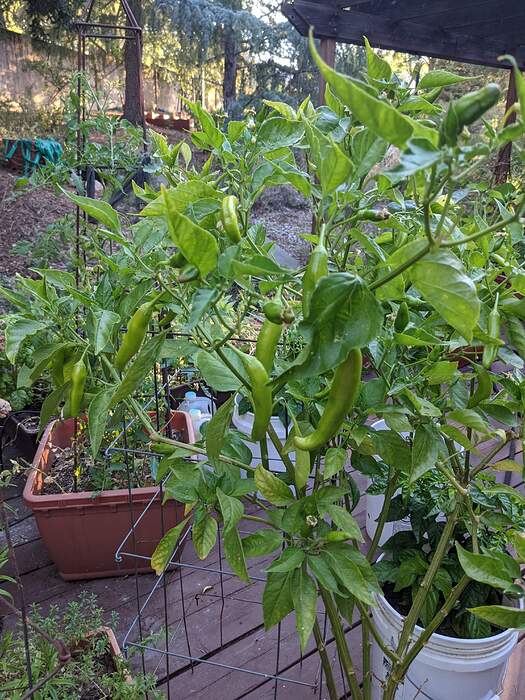 Haha! I did grow cranberries on a bank surrounding a bog garden. Fortunately, they don’t need to be flooded or even constantly soggy, a good ground cover. Unfortunately, snow gave the voracious voles cover to attack and devour the plants.

Wow, shrinkrap, those are very far along for Aji! So, the Aji are good for at least two years. Have you named the plant yet? LOL! By now, it’s an old friend.

If/when Peru gets itself stabilized and travel there is safer, easier, I hope to go again and visit the regions where they grow Aji Amarillo, speak with the farmers and learn their techniques. It’s great fun learning about foreign crops from the folks who grow them for a living.

I would love their help and yours comparing those microclimates to mine (Sunset 14 or 9. Part uncertainty, part wishful thinking . Usually I accept Sunset 14.). “Medditteranian” climate sometimes works.
San Francisco Bay Area and Inland Sunset Zones

Have you named the plant yet? LOL! By now, it’s an old friend.

I was thinking “Bogman”. And if that does not offend, these would be “Bogman 2.0.” 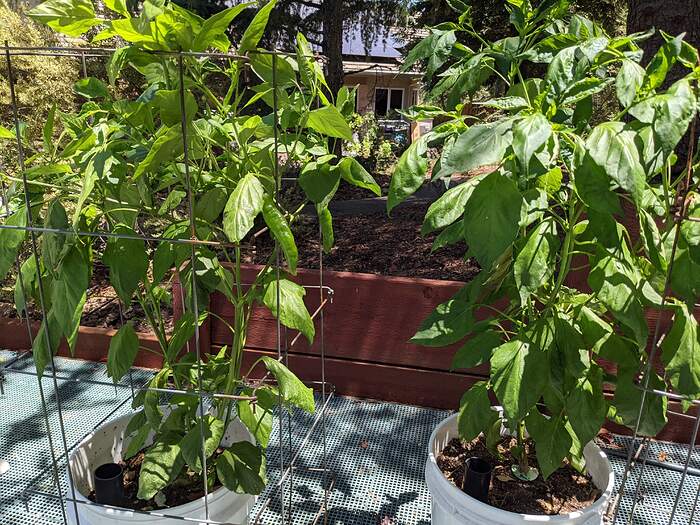 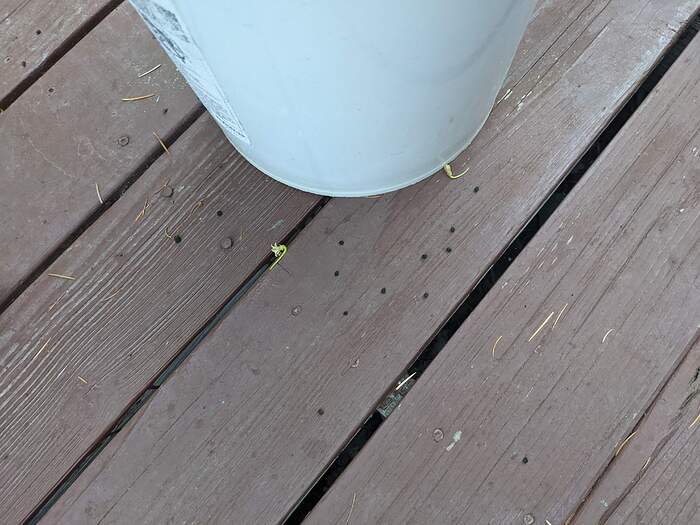 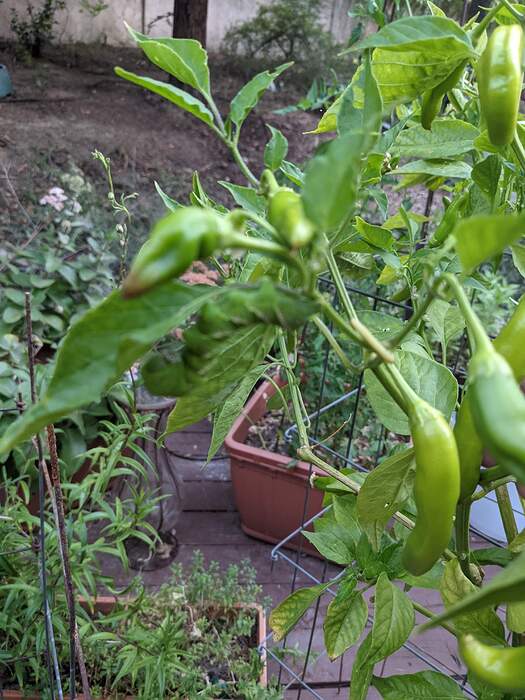 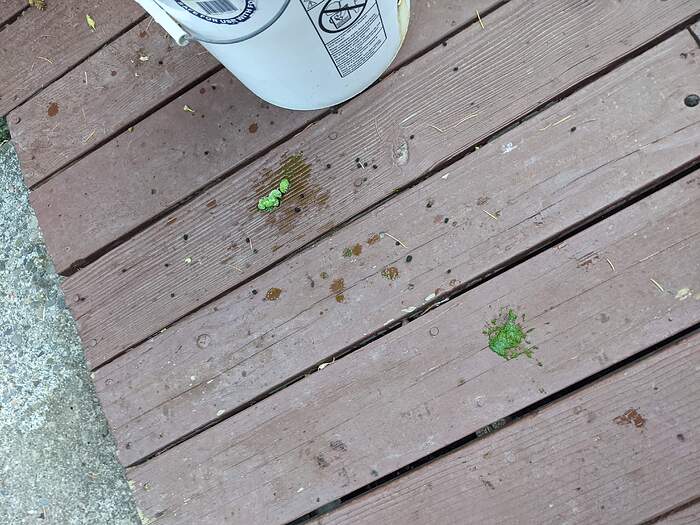 No offense at all!

Those hornworms devour and grow at an astonishing rate. The only ones I leave alone are the ones with little white cocoons sticking out of them. Those have tiny parasitic wasps which kill the caterpillars.

Regarding Aji Amarillo, in Peru: It’s certainly cooler than your climate or the one here, in VA. Historically, the coastal areas, western agricultural regions rarely go above 85 degrees F (29 C). However, there are a bunch of locally-adapted varieties and some may be more heat tolerant. Speaking with farmers is the only way to find out where these might be. Peru has a lot of climate zones.

This year, the only Capsicum baccatum, (related to Aji) I’m growing is Sugar Rush Peach. Those little plants are producing early and like mad! I’ll take a picture, once I get a chance. The unripe green peppers are plenty hot.

The other chili growing here is Charapita, a very small fiery round, yellow-orange pepper from the Peruvian jungles. Those are very much container candidates, as the bushes are small and don’t need staking. The pea-sized peppers make a delicious mango-Charapita barbecue sauce . That and other sauces using Charapita typically get strained, which deals with removing the seeds.

Thanks! Looking forward to seeing your pictures and hearing your findings. My other peppers are “Baron” poblano’s, some red and green corno’s, a cubanelle, another version of aji, and your roccoto. I finally let the old rocotillo go because I just couldn’t keep it watered in the 5 gallon pot. I also have an old Scotch Bonnet from Mt mother in law’s pepper. Lots of flowers on it, but not setting. 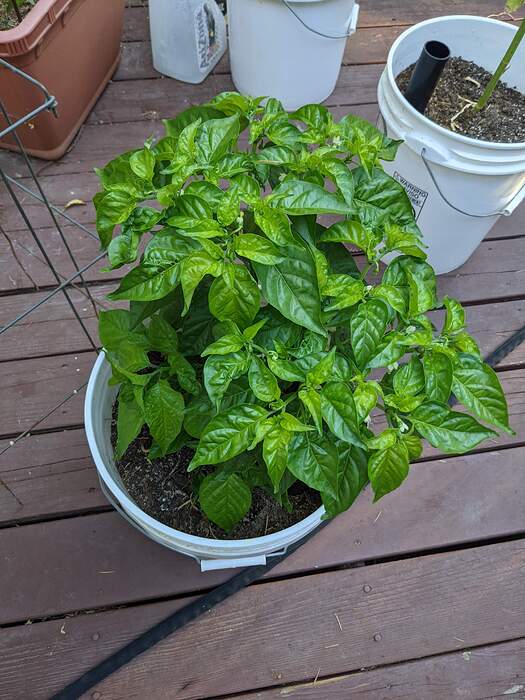 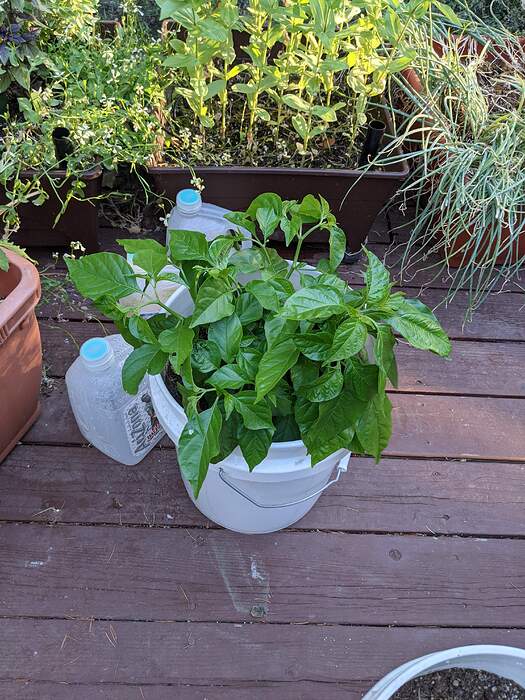 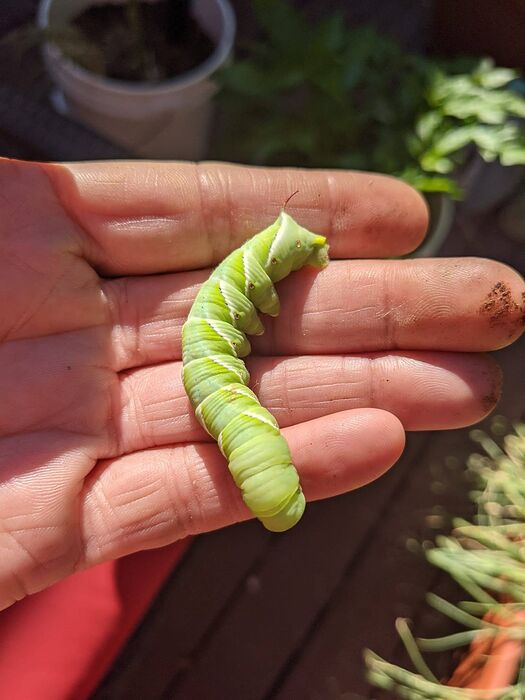 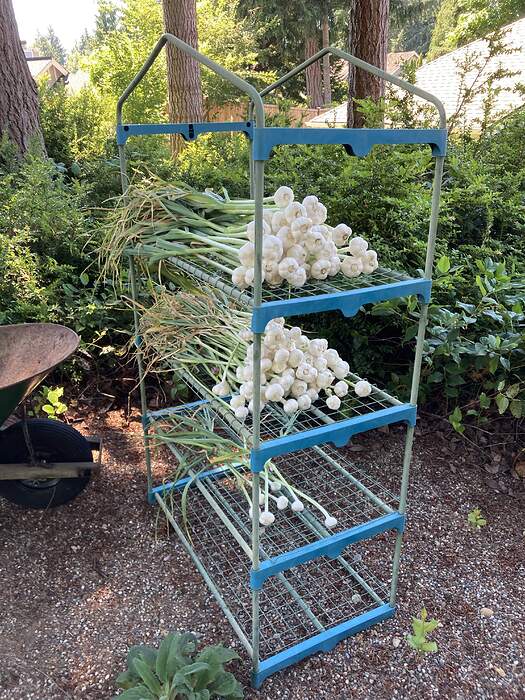 If you have too many, @bogman, I know where you could send any extras.

That’s a gorgeous berry harvest. I can’t wait until my little blueberry plants get big enough to bear fruit, and I’m prepared to fight off the birds and critters in a few years.

I love black currants, and sadly, I can’t grow black currants in MA. I had the most wonderful berry crumble ice cream recently (that had ribbons of black currant) and it was soo delicious! I’m keeping an eye out on how to get black currants (frozen or otherwise) to experiment with for home-made ice cream.

My sister sent me an email showing her new potatoes, from tubers I mailed her. after that, I decided to dig a little: 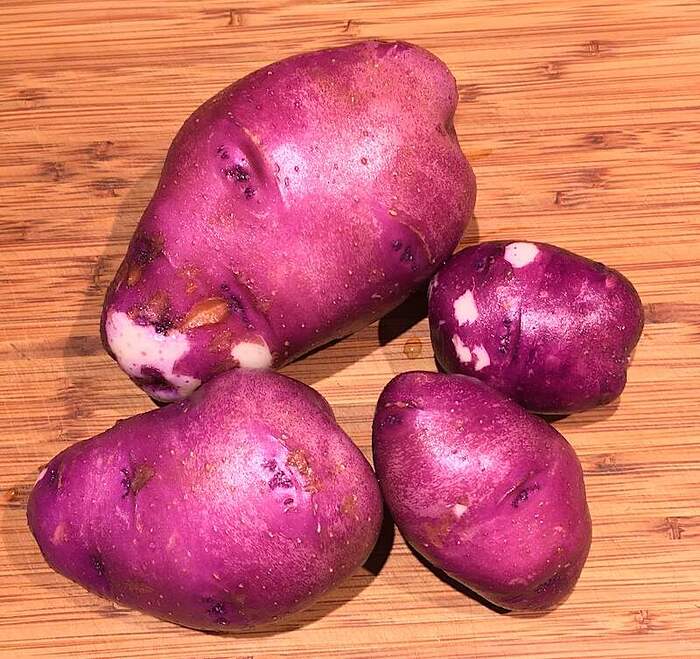 The larger new potato was six inches, but still had that new potato texture and very thin skin. I’ll check the other varieties when the weather isn’t trying to kill me. This one is “Caribe”, an early type well known for new potatoes and fluffy mashed potatoes. The almost metallic violet skin is offset by pure white flesh.

The potato plants are huge and have hardly a sign of dying back yet. I’m hoping for “spudtacular” harvests in a variety of colors.

It’d be good to compare dried blueberries with freeze dried. I picked another gallon today, but no currants. Those just started to bear this year. And…the birds found them!

You should be able to find dried Black Currants easily online. Those would likely taste great rehydrated and cooked a little. Straining out the seeds would help. I guess MA has a ban fearing White Pine Blister Rust? Currants are an alternate host for the fungus.